Sports fight in wrestling is conducted under the rules of classical or free style. Wrestling is a contact sport which favors the formation of musculoskeletal dysfunction in athletes. Training and fighting in wrestling is characterized by significant risks of common musculoskeletal injuries [1, 2, 3, 4, 5]. In sports training in wrestling a high value is put on the development of muscular strength and power mainly through the isometric work of muscles [6], however, any actions are undertaken to apply an activity focused on improved motor control. It is forgotten that an inadequate motor control is responsible for abnormal motor pattern, which in turn reduces the effectiveness of sports training. It has been proved that there is a correlation among muscle strength, power and stability vitally needed for a proper motor control function [7, 8]. Prevention of musculoskeletal dysfunction disorders is a complex process, which requires a holistic treatment of a player associated with the close cooperation with coaches, physiotherapists and doctors. The positive effect of a player’s holistic treatment is motor control improving, which can give the results in lengthening the time career of a player and can reduce treatment costs. Because of the problem’s importance we undertook the attempt to evaluate wrestler’s musculoskeletal system using standardized Performance Matrix Tests. To assess the effectiveness of the operation of the musculoskeletal system, we proposed using tests which do not incur high financial costs and which can be carried out in any location where the athletes might be, either during normal training or just before competition. Functional evaluation allows us to introduce a therapeutic program that reduces the number of weak links and thus the probability of injury occurrence. The use of such a program in a wrestlers training cycle should enable more effective impact on the improvement of motor control and the functioning of the musculoskeletal system.

Assessing the musculoskeletal system using Performance Matrix Tests has hitherto been carried out on athletes in a range of disciplines: fencers, hockey players, canoeists and rowers, as well as among amateur athletes, such as university sports students and pupils at ballet school [9, 10, 11, 12, 13]. Some athletes, on identifying weak links in the musculoskeletal system, segmental stabilization training was undertaken which significantly reduced them [11]. Strong core stability reduces the likelihood of injury [14, 15].

The study involved 25 young men, highly skilled wrestlers from School of Sporting Excellence in Radom Poland: age 16.7 years 1.2 years (mean standard deviation), body weight 77.7 kg 18.7 kg, body height 175.2 cm 14.1 cm. The average training duration of the players was 6.4 years 2.4 years. Among the respondents were members of the Polish Junior National Team and Polish Junior Championship medalists. Wrestlers participation in on an average in 5.4 units 0.5 units of training weekly. Test subjects were volunteers, athletes preparing for the most important competition of that season—greco-roman world wrestling championships. The test subjects did not suffer injury. Injured athletes were excluded from the tests, as this could have negatively affected the data generated.

To evaluate the presence of weak links, low threshold Performance Matrix Tests (Fig. 1), which are subject to copyright, were used [16, 17]. 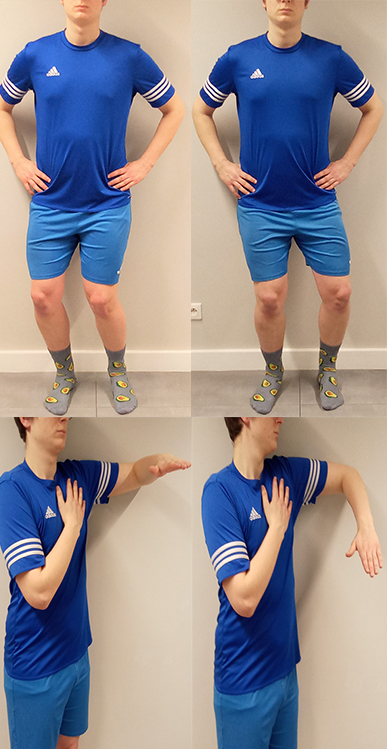 By analyzing and identifying the motion performed by a player, the weakest links of the musculoskeletal system were found. Tests were always assessed by the same investigator. The players received an explanation and shown how to execute the test. After the test, the results were inscribed in to the sheet. Five low threshold activity tests were carried out to evaluate wrestlers motor control: test 1—standing control on slightly bent leg, test 2—spine dissociation, test 3—control of the shoulder joint in the standing, test 4—limbs control with bent knee joints, test 5—limbs control in lean kneeling. The tests were carried out by an experienced physiotherapist, specially trained in conducting and assessing the results of such tests. The athletes reported no problems with carrying out the tests. Scoring two or more points on an individual test indicated a high risk of a weak point occurring in the musculoskeletal system.

Table 1.ANOVA effect of training experience, age of players, level of sport and the number of week micro cycle training on the presence of weak links in low threshold tests.

Another ANOVA variation analysis was conducted to test hypotheses about the impact of training experience on the location of weak links. The values obtained for the location of p3 (brachiocephalic shoulder joint) Pr (F) 0.03215 and p5 (lumbar spine) Pr (F) 0.04042 entitle us to apply for their significant influence on the occurrence of weak links in various places of musculoskeletal system in wrestlers. It was also found that, the value Pr (F) p1 location (cervical spine), p2 (thoracic spine), p4 (shoulder joint) and p6 (knee joint) did not significantly influence the presence of weak links (Table 2).

The next step of statistical analysis was to check frequency significance of wrestling training on the location of weak links in low threshold tests. The obtained value Pr (F) indicates no significant training frequency effect on location of the players weak links (Table 3).

Another ANOVA variation analysis was conducted to verify the significance of the dependence between the age of athletes and the location of weak links occurrence (Table 4). The calculated value Pr (F) indicates no significant effect of wrestlers age on weak links’ location. However, value Pr (F) for the level of p1 0.0983 and Pr (F) 0.0819 for level p2, were close to the limit what proves the existence of a significant effect of players’ age on weak links occurrence (Table 4).

Table 4.ANOVA effect of wrestlers age on the location of weak links in low threshold tests.

The study has confirmed the first research hypothesis that the training loads in wrestling cause the occurrence of weak links (set by low threshold test) in the musculoskeletal system (Fig. 2). Particularly important in the players evaluation is the ability to indicate the place in musculoskeletal system, in which a weak link can occur. This knowledge helps to improve a prevention from a player’s injury. Such detailed and comprehensive analysis of wrestlers’ musculoskeletal system also allows us to apply a precise treatment program, which is an important addition to sports training.

Research hypotheses have been verified which suggest that the presence of weak links in the musculoskeletal system does not depend on wrestlers age, their performance level and frequency of participation in training. However, it has been found that training experience significantly affects the occurrence of weak links Pr (F) 0.01809 (Table 1).

Also we examined whether the training experience, wrestlers age, sports level and frequency of workouts do not have a significant effect on the location of the weak links. On the basis of the value Pr (F) presented in Table 2 we can assure that for the location p1 (cervical spine), p2 (thoracic spine), p4 (shoulder) and p6 (knee) (Table 2) training duration has no an significant effect on the occurrence of weak links in musculoskeletal system. However, for location p3 (brachiocephalic shoulder joint) and p5 (lumbar spine) has a significant impact because for p3 = Pr (F) and 0.03215 and for p5 = Pr (F) 0.04042 (Table 2).

The obtained results give us valuable information pointing at the necessity of introducing a preventive action for wrestlers with training experience 6.36 years 2.38 years which would block the occurrence of weak links in the musculoskeletal system among the respondents.

Performance Matrix Tests could serve as a reliable research tool, for example as part of selection tests prior to athletes commencing a training period [17, 19]. It has been shown that problems in the neuromuscular system in the core is a contributing factor to the occurrence of spinal sports injuries, as well as in specific sections of the kinetic chain. The strategy for preventing injury relates to proper control, and so to the correct neuromuscular transmission [20].

Martial arts have a high risk of injuries [4, 5, 21, 22]. The issue related to incidence of sports injuries among wrestlers is relatively well known. The most frequently mentioned locations of injuries in musculoskeletal system in wrestlers are knee joints, shoulder joints, head and face, lumbar spine, ankles, cervical spine and muscle strain [4, 5, 23, 24, 25, 26, 27, 28, 29, 30]. Muscle rupture or strain is also a cause of a substantial percentage of injuries among players in different sports disciplines [31].

In martial arts much effort is put into working on the increase in muscle power and strength. More frequently applied kind of training in sport, according to Core Stability concept, concerns working on shaping local and global trunk muscles, upper and lower limbs, in symmetrical and asymmetrical movements, combined with trunk muscles’ activity [17].

Our study has provided the information that places in musculoskeletal system with a weaker motor control in tested players are brachiocephalic shoulder joint and lumbar spine. More frequent injuries of elbow and knee joints, head, face and nose are among the competitors practicing the classical wrestling style [32]. It should be mentioned that not enough sufficient attention is paid to the prevention from injuries among wrestlers. Most coaches working with players focus their attention on the development and improving sports technique [33]. Certainly, greater coaches awareness on the use of injury prevention and the introduction of these activities in training practice would contribute to reducing the occurrence of injuries in wrestlers [34].

Changes in the strategies and techniques of fighting could provide a way of avoiding or limiting the occurrence of injuries [35]. It is extremely important to develop a training model (including tactical-technical elements) aimed at achieving a high sporting level while reducing the occurrence of injuries in athletes [36]. The multifaceted nature of training wrestling as an Olympic discipline should be rooted in predicting possible injuries and their prevention. Martial arts, including wrestling, have a high incidence of injury. Introducing tests which may quickly and easily assess the existence of a weak link in the musculoskeletal system could aid athletes in their preparations for competition (avoiding injury) and be one of the elements influencing the attainment of a high sporting level.

All procedures performed in studies involving human participants were in accordance with the ethical standards of institutional and/or national research committee and with the 1964 Helsinki declaration and its later amendments or comparable ethical standards. Informed consent was obtained from all individual participants included in the study. The study protocol was approved by the Bioethics Committee at the Medical University of Poznan, Poland (permit No. 509/10).