Penile prosthesis founded in 1973 as a cornerstone solution in treating erectile dysfunction (ED) [1]. Nowadays, it’s considered as the gold standard treatment for refractory ED [2]. Three-piece inflatable penile prosthesis (IPP) is the most advanced prosthesis, that consists of a two-cylinder, a pump, and a reservoir [3].

Usually, traditional placement of the reservoir takes place in the space of Retzius (SOR) [4]. This placement has showed some concerns among literature attributing to its proximity to major anatomical structures such as the iliac vein, bowel, and bladder, which leads to anticipate noxious complications [5]. Especially among patients who underwent any previous pelvic surgery or radiation “hostile pelvis” making the area more vulnerable to reservoir complication, such as erosion into the bladder, compression of the external iliac vein, and small bowel obstruction [5]. Although, bladder erosion is still a quite common complication even in low-risk patients [5]. Thus, an encouraging step toward placing the reservoir outside SOR has emerged recently [6].

In 1990s Germany, professor Schreiter and his group started to place the reservoir in the peritoneal cavity, which helped in avoiding the capsule formation and auto-inflation issues at that time, since the lockout valve hadn’t been invented yet [7]. Unfortunately, the results had not published anywhere [7]. In this century, the first ectopic reservoir placement (ERP) of IPP was described by Wilson et al [8]. In 2011, Perito and his colleagues shared their 10-year experience in placing the reservoir through the abdominal wall either via a penoscrotal or an infra-pubic incision as a regular method at their institute, including patients with a virgin pelvis [9]. “High-submuscular” (HSM) term was firstly described by Dr. Morey who used a similar method to Perito and Wilson except for placing the reservoir higher using a Foerster lung clamp [7].

Herein, we present a case of an eroded intravesical IPP reservoir followed by a revision procedure of high-submuscular reservoir placement using a second incision.

A 63-year-old diabetic patient presented to our Men’s Health centre at Hamad Medical Cooperation, Qatar, complaining of a gross terminal hematuria for 2 months prior to presentation. He had undergone a 3-piece IPP (AMS 700 CX®, American Medical Systems Inc., Minnetonka, MN, USA) implantation via a penoscrotal incision due to his organic erectile dysfunction (ED) at our institute, three years earlier.

On examination, the patient has had a mild lower abdominal tenderness with normal device cycling. An ultrasound image showed a mass inside the bladder; therefore, a further cystoscopy was performed to reveal that the reservoir is completely eroded inside the bladder (Fig. 1). Additional imaging via a CT scan exhibited no contrast extravasation. (Fig. 2) Urinalysis revealed microscopic hematuria, and negative urine culture was obtained.

Cystoscopy. (A) The tube erosion through the bladder wall. (B) The eroded reservoir completely inside the bladder.

A computed tomography scan abdominal-pelvic protocol. (A) Without contrast, the arrow pointing at the reservoir. (B) With contrast, no extravasation was noticed.

Upon questioning, the patient recalled that before 2 months, he suffered from a sudden severe lower abdominal pain during woman-on-top sexual intercourse position, while he is under the effect of heavy alcohol drinking. His pain was followed by a subsequent gross hematuria, at which he self-prescribed antibiotic attributing his condition to a regular urinary tract infection. The hematuria started to subside gradually, in which he resumed using the device as usual, except for a mild lower abdominal pain.

A revision procedure was conducted. Starting by a lower midline laparotomy to access the bladder, then a cystostomy to explant the eroded reservoir, afterwards, a cystorrhaphy took place.

Throughout the penoscrotal incision, a tunneling and dissection of the external oblique fascia were made, just above the external inguinal ring to insert the tube in the contralaterally.

An initial dissection of the rectus abdominis muscle and transversalis fascia was made to create a space for the new AMS Conceal® reservoir in the contralateral side, followed by a subsequent connecting to the previously placed prosthesis. The prosthesis was filled (100 cc) and cycled to ensure a proper functioning. Incisions were closed traditionally after drain insertion.

Finally, patient recovery was unremarkable with regular inflation and deflation without any discomfort or reservoir palpability. A contrast X-ray showed no extravasation. (Fig. 3) Patient was discharged and prescribed a 500 mg levofloxacin (once daily for two weeks). He started to use the device after 6 weeks without any issue. Patient was followed-up for 1 year later and he is fully satisfied, however we didn’t asses patient satisfaction status using a validated-questionnaire such as quality of life and sexuality with penile prosthesis (QoLSPP) [10]. 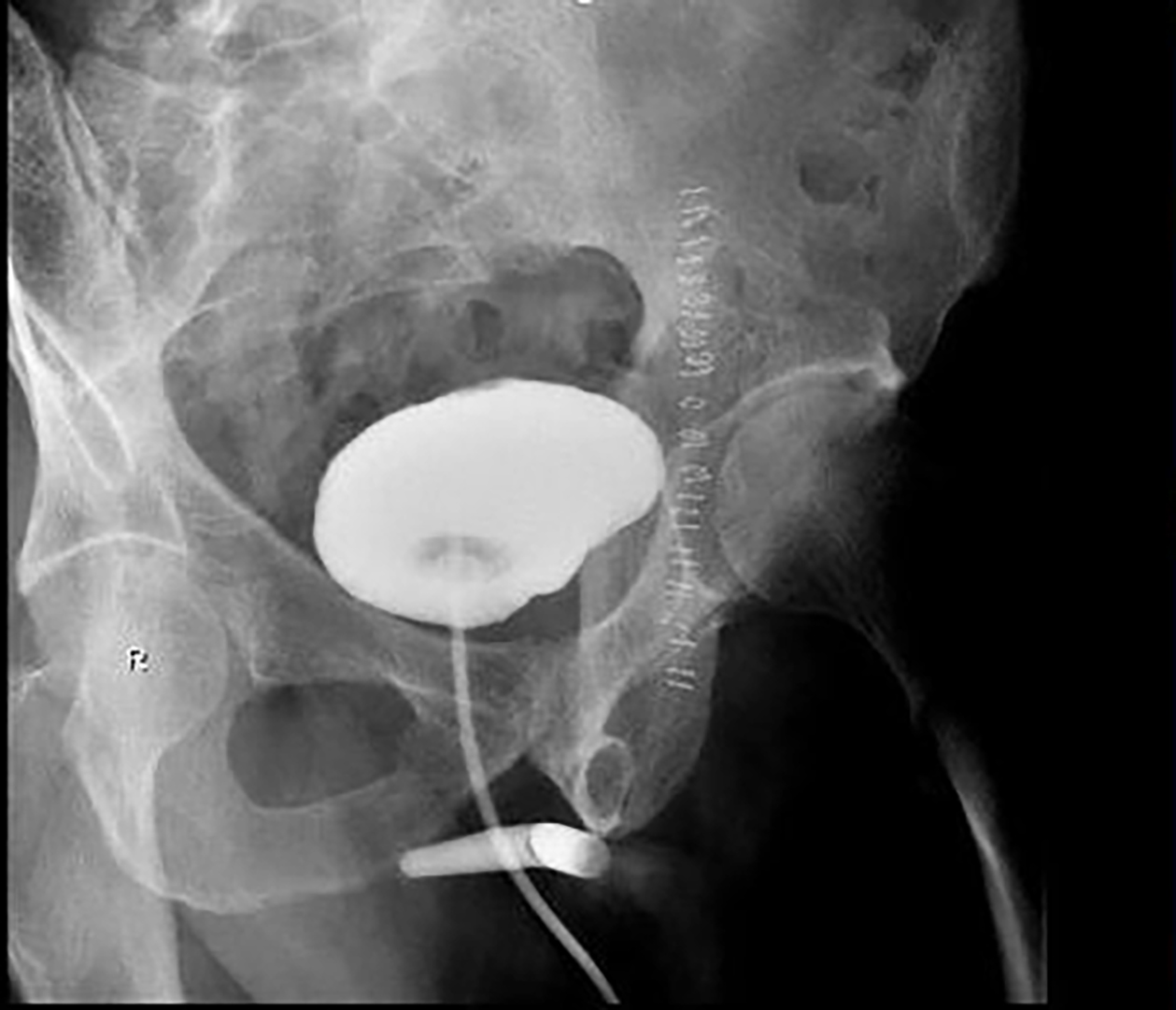 A pelvic X-ray with contrast, no extravasation was noticed.

Intravesical reservoir erosion is the most common reported reservoir-related complication, Simon et al. [5] reported 41% of reservoir related complications were intravesical erosion, this could be explained due to the anatomical proximity of the filled bladder to the inguinal canal (2.61 cm) [3, 5]. Additionally, it has been shown that some cystoscopy imaging among IPP patients viewed reservoir imprints at the superior wall of the bladder [9]. Also, delayed presentation as far as 4 years has been reported [9]. Our patient main symptom was hematuria which is associated with all the reported erosion cases, whereas dysuria, frequency, and urinary tract infection were presented to a lesser extinct [5]. It is worth mentioning that we use a strict protocol for diabetic patients who had undergone IPP implantation to avoid such a complication of infection [11].

Additionally, alcohol binge drinking has a diuretic effect which leads to increased bladder filling, moreover, it could inhibit the urge of sensation, which in turn will lead to bladder overfilling. All of these could explain the reservoir erosion during intercourse [12].

According to literature, any previous pelvis operation “hostile pelvis” (e.g., radical prostatectomy) or pelvis radiation therapy, considered as a risk factor for intravesical reservoir erosion, additionally, blind reservoir insertion could contribute also, due to its proximity to some major anatomical structures, which would make SOR unpreferable space for specific group of patients [5].

In 2010, American Medical System (AMS) and Coloplast the most known penile prosthesis manufacturer, introduced the flat reservoir: Conceal® and Cloverleaf®, respectively [13]. Flat reservoir utilized a paradigmatic shift in ectopic reservoir placement due to its low-profile design, making it impalpable when placed ectopically [5]. Since then, ERP started to gain a steady popularity among the prosthetic urologist community, starting with members of the Sexual Medicine Society of North America (SMSNA) by emphasizing the safety of ERP technique, stating the necessity of holding related training courses and agreeing on the difficulty of SOR placement in a hostile pelvis [13]. Furthermore, in 2015, Coloplast granted U.S Food and Drug Administration (FDA) approval for some changes in the instruction form to include ERP [5].

A recent survey among high-volume implanters exhibited that ectopic placement is becoming more acceptable due to its high rate of safety [13]. ERP grants more advanced choices for patients who underwent previous pelvic surgery (e.g., radical prostatectomy) such as having a 3-piece inflatable penile prosthesis (IPP) instead of a malleable or 2-piece prosthesis [2].

The ectopic reservoir could be placed in submuscular, retroperitoneal, subcutaneous, or intra-scrotal space [1]. Historically, submuscular and retroperitoneal gained the most attention [1, 7]. We have placed the reservoir high-submuscular beneath the rectus abdominis and anterior to the transversalis fascia (ATF), which is a preferable location for any prior pelvis surgery [4]. Whereas, it can be placed posterior to transversalis fascia (PTF) in cases of surgically free pelvis [4]. This approach has been described comprehensively by Perito and his colleagues [7, 9].

Loh-Doyle and his colleagues raised some concerns about increasing the risk of post-operative infection due to the second incision [15]. On the contrary, others have showed no major difference in the rate of infection between using either a second or singleincision [2].

With respect to ERP complications, about 3.4% of patients reported post-operative reservoir palpability [1, 9]. Despite that, a lower number of patients had requested a revision surgery [16]. Gradually with time, patients’ sensation regarding reservoir diminishes because of the capsule formation process [16]. As well as, palpability is believed to be related to patient’s BMI, the lower BMI the higher chance of reservoir being palpable [9, 16]. Even though, the patient should be cognizant that the feeling of the reservoir is not a defect, it is mainly a part of the functioning system [16]. Stember et al. [9] suggested a placement near to the midline this might decrease the palpability by rectus muscle concealment.

Previously it was thought that ERP auto-inflation would be such an embarrassing complication due to its undesirable effect because of a high reservoir back pressure, however, the development of the lockout valve mechanism resolved that [5, 7]. Another reported ATF related complication is reservoir herniation into the inguinal canal, this could be avoided by placing the reservoir high and far from inguinal canal as we did [7, 9, 17].

Finally, we would like to recommend ruling out bladder erosion diagnosis in any presented IPP patient who has been suffering from a recent hematuria with/without lower urinary tract symptoms by further diagnostic and imaging utilities.

The authors declare no conflict of interest. MA and AY are serving as one of the Editorial Board members of this journal. We declare that MA and AY had no involvement in the peer review of this article and has no access to information regarding its peer review. Full responsibility for the editorial process for this article was delegated to CB.

Cystoscopy. (A) The tube erosion through the bladder wall. (B) The eroded reservoir completely inside the bladder.