A 78-year-old man presented with a long-standing history suggestive of benign prostatic enlargement, causing obstructive symptoms mainly. Serum prostate-specific antigen (PSA) was measured for the patient and revealed a free PSA value of more than 100 ng/mL and a total PSA more than 25 ng/mL. PSA ratio was 25. Ultrasound was done and revealed a prostate size of 57 cm. Additional ultrasound findings included bilateral renal cysts the largest of which on the right side measured 3 cm 3 cm and the largest on the left was 3 cm 2 cm. Due to urinary retention, transurethral resection of the prostate (TURP) was performed and the specimen was sent to our pathology department. Microscopic examination revealed diffuse infiltration of the prostatic tissue by signet ring cells (Fig. 1), in addition to rare foci of Gleason 4 adenocarcinoma component (Fig. 2). Perineural invasion was identified (Fig. 3). Signet cells were positive for alcian blue stain (Fig. 4). A bone scan showed multiple focal areas of increased tracer uptake in the cervical spine, right shoulder, upper ribs on both sides, left sacroiliac joint, right acetabulum and left hip joint. Moreover, the scan revealed an abnormal tracer accumulation on the left side of the pelvis suggesting a soft tissue involvement. The patient was referred to another center where he was started on hormonal therapy (Zoladex and Abiraterone). The PSA value decreased to 670 ng/mL, 43 ng/mL, and 6.9 ng/mL at 4 months, 6 months, and 8 months of follow up, respectively.

Diffuse infiltration by signet ring cells is identified (hematoxylin and eosin staining, (A) 40, (B) 400). 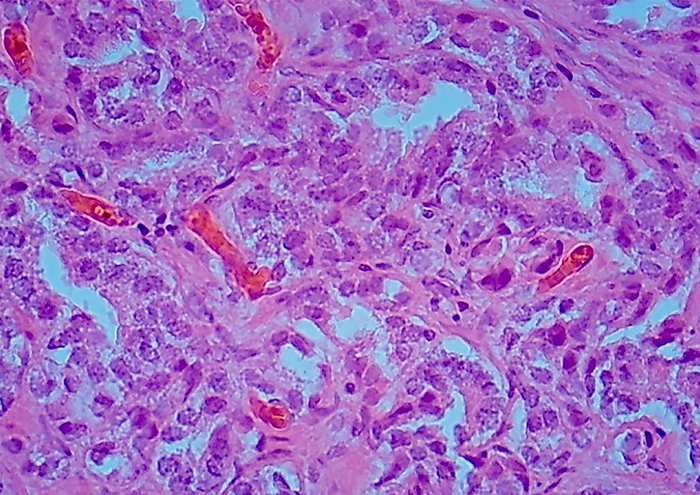 The signet ring cells are positive for alcian blue stain (400).

Prostatic signet-ring carcinoma is an aggressive and rare type of prostate cancer. It was first reported by Uyama and Moriwaki in 1979 [3, 4, 5, 6, 7, 8]. Although signet ring carcinoma more commonly occurs in the gastrointestinal tract, mainly the stomach and colon, it has been documented in various organs of the body, such as the breast, bladder and pancreas. The clinical investigations in this case excluded an origin other than the prostate [2]. The presentation of this tumor is variable and can be affected by the stage. Obstructive or irritative urinary symptoms can occur [9]. The age of our patient was 78 years, ten years above the median age for this type of prostate cancer [10]. The signet-ring appearance of tumor cells is due to the mucin that pushes the cell nucleus. However, the cells can be negative for mucin [11]. Our case showed positive result for alcian blue, as reported to be positive in 60% of the cases [1]. We also found another adenocarcinoma component with a lower Gleason grade which can point to prostatic origin [12]. Of the possible differentials is lymphoma. Moreover, artifactual signet-ring change can be observed in lymphocytes or smooth muscle cells [13]. Our case showed multiple bone metastases and this was expected due to the poor survival associated with the behavior of this type of prostate cancer. About 40% of the reported cases presented as stage T4 [9, 10]. Warner et al. [14, 15] reviewed 9 cases of primary prostatic signet ring carcinoma among 29,783 prostate cancer cases diagnosed at Mayo Clinic between 1970 and 2009 and 42 cases from a Pubmed search. They reported a mean age at diagnosis of 68 years, and a mean PSA level of 95.3 ng/mL. The most common Gleason score was 8. The mean survival was 29 months. The patient was referred to another center and was planned for hormonal therapy in the form of Zoladex and Abiraterone. PSA markedly decreased at 8 months of follow up. The therapeutic approach to prostatic signet ring carcinoma can be similar to that of conventional adenocarcinoma in the form of various combinations of surgical, hormonal, as well as radiation therapy. The present case showed favorable response with hormonal therapy. Lilleby et al. [16] reported a favorable response to hormonal and radiotherapy at a follow up of 12 months. Complete androgen blockade was also reported to be effective [17]. However, poor response to hormonal therapy has been reported, in addition to the probability for the tumor to become castration-resistant [4, 9]. Full response has been documented with the use of the chemotherapy combination used for colorectal cancer FOLFOX [18]. However, more studies are still needed to guide the management of this rare and aggressive tumor. Since the gastrointestinal tract is a much more common site of origin for signet ring carcinoma, a thorough workup (abdomen computed tomography and upper and lower endoscopy) to rule out a primary gastrointestinal origin should be performed [15]. If the source is from the gastrointestinal tract, additional and alternative therapies would be commenced.

In conclusion, signet ring carcinoma of the prostate is a rare variant of primary prostatic adenocarcinoma that can be faced by the practicing pathologist. Ruling out another origin such as the gastrointestinal tract is mandatory, and the need for multiple therapies should be expected due to the aggressive behavior of this tumor.

Written informed consent was obtained from the patient.

Diffuse infiltration by signet ring cells is identified (hematoxylin and eosin staining, (A) 40, (B) 400).