Suicide, an intentional self-harming behavior, is a major health problem around the world. According to the World Health Organization, nearly 800,000 individuals die each year due to suicide [1]. According to data from the Turkish Statistical Institute (TURKSTAT), there were 3406 suicide-related deaths in 2019 in Turkey, of which 2626 (77.1%) were men and 780 (22.9%) were women [2]. Among those women who committed suicide, a majority (15.8%) were aged 15–19 years. Similarly, among the men who committed suicide, a majority (11.6%) were aged 20–24 years [2]. The number of suicides may be higher than reported because some motor vehicle accidents may be used a method for committing suicide [3]. In traffic accidents in south-east Scotland between 1993 and 2003, 17 of 597 traffic deaths appeared to be suicides [3, 4].

Many studies have been conducted on the causes of suicide [5, 6, 7, 8, 9, 10, 11]. These studies have typically investigated the psychiatric, sociological, economic, and biological components of suicidal behavior. There are also studies on the genetic component of suicidal behavior [12, 13, 14, 15, 16, 17]. Monozygotic and dizygotic twins were investigated in the initial studies on the genetic component of this behavior [18]. It has been shown that monozygotic twins are more likely to exhibit suicidal behavior than dizygotic twins [18, 19, 20]. Additionally, family studies and studies performed on adopted individuals [21, 22, 23, 24, 25], have shed light on molecular etiologies for suicide behavior [12, 13, 14, 15, 16, 17].

The serotonergic system is linked to decision making in patients with altered behavior. Low serotonin input to the anterior cingulate and ventromedial prefrontal cortex is linked to suicide behaviors [26]. Serotonergic system genes with neurobiological effects have been investigated in studies involving suicide behavior [27, 28, 29, 30, 31, 32]. Polymorphisms in genes may play a role in suicidal behavior [29, 33, 34]. These polymorphisms are usually single nucleotide polymorphisms (SNP), which are single nucleotide changes in specific regions of the genome [34, 35, 36]. Serotonin transporter (SLC6A4) gene is an important regulator of serotonin reuptake and signaling. The process after serotonin is released into the synaptic gaps is regulated by SLC6A4, which helps reuptake serotonin from nerve endings and platelets. SLC6A4 is located on chromosome 17, 17q11.1–q12 [37]. Polymorphisms in SLC6A4 that have been considered as a risk factor for suicidal behavior are 5HTTLPR, S-Tin2, rs25531, and rs6355 [38, 39, 40, 41]. In rhesus macaques, the short allele (“s”) of 5HTTLPR is associated with decreased serotonergic function among monkeys reared in stressful conditions [42, 43]. The low frequency ss genotype of the 5HTTLPR/rs25531 polymorphism increased the risk of suicidal behavior in men using citalopram [44]. In another study, SLC6A4 polymorphism was found to have a stress-reducing effect on suicidal ideation which varies between men and women [45].

The tryptophan hydroxylase (TPH) enzyme, which is a ratio and rate limiting enzyme in serotonin biosynthesis, also determines the level of serotonin in the synaptic gap [35, 46, 47]. TPH has the following two isoforms: TPH-1 and TPH-2. These two forms are located on different chromosomes. The TPH-1 gene is located on chromosome 11 and has the following two polymorphisms on the 7th intron showing A/C (adenine/cytosine) changes: A779C (rs1799913) and A218C (rs1800532). It is believed that the TPH-1 gene rs1800532 polymorphism may be a risk factor for suicidal behavior [48]. In a meta-analysis, the association of THP-1 and TPH-2 gene polymorphisms with suicidal behavioral was explored and TPH-1 gene variants showed a significantly positive association with suicide behavioral [49].

The TPH-2 gene is located on chromosome 12 (12q15) and contains 11 exons [35]. Approximately 500 SNPs have been detected in the TPH-2 gene, and they are typically located in the non-coding regions of the gene [50]. Although all of these point polymorphisms on the TPH-2 gene have not been fully investigated, a study has reported that they play a role in psychiatric diseases [51]. The rs7305115 polymorphism G allele, located on the 7th exon in the TPH-2 gene, has been shown to be a risk factor in patients with severe depression [52]. Suicidal behavior has been associated with the A allele and AA genotype of the rs7305115 polymorphism in the Mexican population [52].

Ethics Committee approval was obtained from the Ankara University Faculty of Medicine for this study (Decision No: 09-387-15, May 25, 2015) and approved by the Ministry of Justice (Decision No: 21589509/694, Aug 6, 2015). The study included 100 suicide cases (85 men, 15 women) who had routinely been autopsied in the Ankara Group Presidency of the Forensic Medicine Institute, and 100 healthy donors (88 men, 12 women) who had donated blood at Ankara University Faculty of Medicine Serpil Akdağ Blood Center. Blood samples were collected after obtaining consent for the study. Inclusion criteria included the absence of a history of psychiatric illnesses other than depression, absence of schizophrenia, bipolar mood disorder, mental retardation, chronic illness, substance and alcohol addiction, and subjects who were 18–65 years. Blood samples (2 mL) from suicide and healthy cases were collected in EDTA tubes and stored at –20 C until the DNA isolation stage.

A literature review was conducted on studies involving suicidal behavior, from which 4 studies of genes and polymorphisms that could be considered candidates were selected (Table 1). The blood samples stored in EDTA tubes during routine autopsy in suicide cases and during blood donation in the control group were subjected to DNA isolation. Nucleospin Genomic DNA from Blood (Macherey-Nagel, Clontech, San Jose, CA, USA) kits were used for DNA isolation. Kit protocol standards were followed. A NanodropND-1000 device was used to measure the quantity and quality of the isolated DNA. Special attention was paid that the absorbance values of the DNA samples at 260/280 nm were close to the ideal value of 1.8 nm, and that the values at 260/230 nm, another nano drop parameter indicating the purity of DNA, were within the range of 1.8–2.2 nm.

Table 1.Genes and polymorphisms included in the study.
2.3 Genotyping

A competitive Allele Specific polymerase chain reaction (PCR) (KASP) method was used in the study. KASP is a fluorescence-based endpoint genotyping technology of SNPs used to identify an allele at a locus in DNA [56].

The following protocol was used for KASP trials: DNA samples were diluted to 15 ng/L and 2.5 L of each sample was individually added in 384-well sample plates. A negative control was added to the final wells. Before starting genotyping, the master mix was prepared using the KASP mix in the KASP kit (LGC Genomics, Bellshill, United Kingdom) and the primary mix. A master mix of 2.5 L was added to each well. The KASP protocol was followed after transferring the samples and master mixes to the plates. According to the KASP protocol, a water bath-based hydrocycle device was used, and the protocol named Touch Down 61–55 was selected. The most important feature of this protocol is that the temperature is reduced from the 61 C annealing phase to the final 55 C by 0.6 C after each cycle.

After the amplification, data analysis of the plates was performed with the Omega device that analyzes the FAM-HEX probes. During the initial analyses following amplification, additional cycles were performed, as the glows may be in pink color and scattered owing to incomplete primer binding. Following the initial analysis, 12 recycles were performed for 4 plates. These 12 recycles were performed in 4 stages, with 3, 6, 9, and 12 at each stage. TD Recycle Program was selected on the hydrocycle device while recycling. The plates prepared for each SNP selected in our study were analyzed with the Omega device after each recycling stage, and the most suitable cycle was subsequently selected.

Data obtained in the study group were evaluated using the IBM SPSS (version 23.0, IBM Corp., Chicago, IL, USA) software. Sociodemographic characteristics of the study group were presented with descriptive statistical data such as number, percentage, and standard deviation (SD). The normality of distribution of data that were obtained was evaluated by Shapiro–Wilk test. Chi-square () and Mann–Whitney U analyses.

3. Results
3.1 Characteristics of the study population

Table 2.Comparison of the demographic characteristics of the study group.

The most common method used in the suicide group was hanging (89%). There was no difference between men and women in terms of suicide methods ( = 7.469, p = 0.280). The comparison of sex and suicide methods is shown in Table 3.

Table 3.Comparison of gender and suicide methods in the study group.
3.2 Evaluation of KASP results 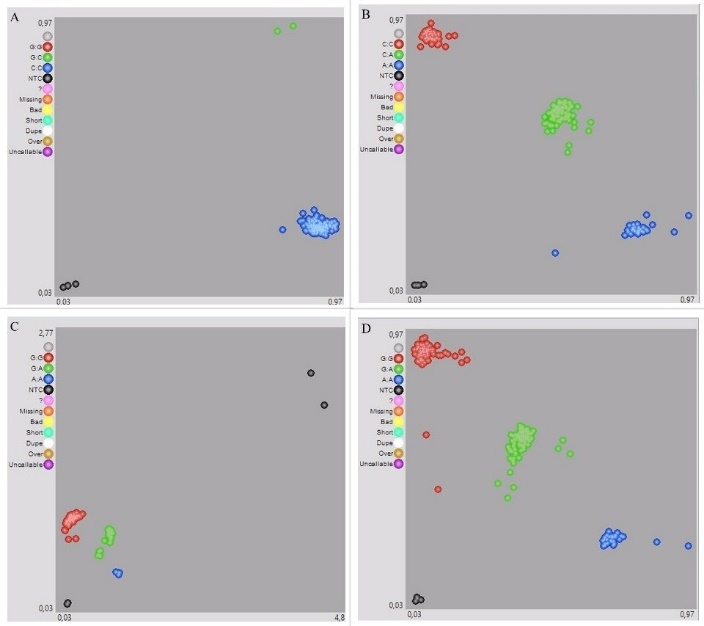 In a study conducted with 2587 suicide-related deaths in Finland, it was found that men typically died through suicide by hanging and women through self-poisoning [57]. Another study on 181 cases that underwent post-suicide forensic autopsy in Iran reported that the most common suicide method was hanging in men, and consuming drugs and toxic substances in women [58]. In our study, it was found in 100 suicide cases that resulted in death that the most common method of suicide was by hanging in men, consistent with the literature, and the most common suicide method was also by hanging in women, which was contrary to other studies. The incidence of suicide methods varies from country to country and region to region [59].

In another study, changes in SLC6A4 mRNA expression in patients with severe depression with suicidal behavior were investigated, and it was concluded that the SLC6A4 gene could be used as a biomarker in suicidal behavior [73]. In our study, rs6355 polymorphism, which has not been previously studied in the Turkish population; no statistically significant difference was found between the groups.

One reason for the variable results obtained in the studies is that suicidal behavior has a complex origin. Environmental and psychiatric components are also risk factors along with genetic factors. Groups comprised of individuals diagnosed with schizophrenia, bipolar disorder, alcohol and/or substance addiction, or severe depression that exhibit suicidal behavior were selected in the majority of the studies. It is known that selected polymorphisms may be associated with psychiatric diseases [50, 51]. Therefore, it is imperative to consider psychiatric and physiological factors. In the present study, patients without a history of psychiatric illness, schizophrenia, bipolar mood disorder, mental retardation, history of chronic disease, and substance and alcohol addiction were selected to minimize this effect.

The KASP system used in the genotyping phase of the study is a new PCR technology. To the best of our knowledge, this method has never been used in other studies. In the KASP analysis, amplification occurs in a hydrocycle device which is operated based on the principle of a hot water bath. It differs from other PCR methods because of this feature. Compared to other genotyping systems used in studies, this method is both economical and less time-consuming. Another advantage of this method is that more than one SNP can be analyzed at the same time and samples of 384 individuals can be placed on a black-and-white plate. The fact that the hydrocycle device has a feature that can simultaneously read four plates is advantageous for concurrently analyzing more than one SNP.

This study has some limitations. Usually 80% (0.8) power is regarded as a goal in a replication study. This study had 80% power to detect an effect with OR = 2 with SNP MAF = 0.15, or OR = 1.8 with SNP MAF = 0.47. But such higher effect levels are not expected for single SNPs. The study has limited power to detect the expected effect sizes of these SNPs. Therefore, the negative results are expected due to the insufficient power, which is a major reason for the negative statistical results (p 0.05).

There is a study on mice in the literature [74]. There are also studies on urine and saliva samples [75]. These studies are important for understanding brain functions and diseases. Therefore, studies on suicide should also be developed.

In our results, although no statistically significant differences were found; we observed non-significant tendencies of increased minor alleles in suicidal men for all TPH SNPs. Our study is one of a limited number of studies on suicide in the Turkish population. It is an important preliminary study for future studies on the genetic component of suicidal behavior and determination of candidate genes.

NC and NLST designed the research study. DYK performed the research. HO, OC, NT, BO Collection and analysis of samples. EE provided help on analyzing the data. DYK, EE, NC and NLST wrote the manuscript. All authors contributed to the study, approved the final version for publication, and take responsibility for its accuracy and integrity.

The study was conducted with the project number 16H0230004 with support from Ankara University Scientific Research Projects. We would like to thank Specialist Saffet ÜNER and Specialist Gülsüm Öztürk EMİRAL for their contributions.