Neuroendocrine cancer of the prostate has been considered to be an extremely rare clinical entity with very scarce therapeutic options [1]. Autopsy studies may reveal prevalence as high as over 10% of neuroendocrine foci within prostate adenocarcinomas [2]. Recently we reported a clinical incidence of 2% and a relatively better prognosis for a group of patients [3]. We believe the data are not related to a local multiplication of cases but rather to a more accurate diagnostic procedure. In fact, routine histologic and staging examinations may miss the exact diagnosis [2].

In some specific situations clinicians have to ask explicitly the pathologists to realise immunohistochemistry with neuroendocrine markers. Furthermore, in case of facing a dedifferenciation of an adenocarcinoma under LHRH agonist treatment the biopsy of a secondary lesion may be necessary for the correct diagnosis.

A 60-year-old patient was diagnosed with multiple hepatic metastases of an unknown primary malignancy by thoraco-abdomino-pelvic CT scan realised for asthenia and weight loss. The histologic examination of a targeted liver biopsy showed metastasis of an adenocarcinoma and raised the suspicion of prostatic origin. Immunohistochemistry for CK7, CK19, CK20, CDX2, TTF1, PAX-8 and HSA was negative. PSAP showed marked diffuse staining and PSA slight focal positivity.

However, as the serum level of prostate specific antigen (PSA) was not elevated, the suspicion was rejected. Similarly, the more than double the upper limit of the normal range for serum neuron specific enolase (NSE) was considered as being non-significant. The gastrointestinal oncology board proposed palliative chemotherapy by capecitabine-oxaliplatin (CAPOX) with the hypothesis of an occult gastrointestinal primary. Additional stains for the verification of neuroendocrine features were suggested at the board but the realisation was delayed. Control CT scan showed progression of the liver lesions and appearance of mixed, lytic and sclerotic lesions in the lumbar vertebrae after 2 cycles of CAPOX. By that time the second series of immunohistochemistry showed positivity for all the three neuroendocrine markers: CD56, chromogranin A and synaptophysin.

The patient received 2 cycles of chemotherapy with cisplatin-etoposide. Before the third cycle he fell ill with COVID-19. The treatment should be interrupted for months and the patient never recovered his former status for being fit enough to continue cytotoxic therapy. He has been on comfort treatment since the infection (Fig. 1). 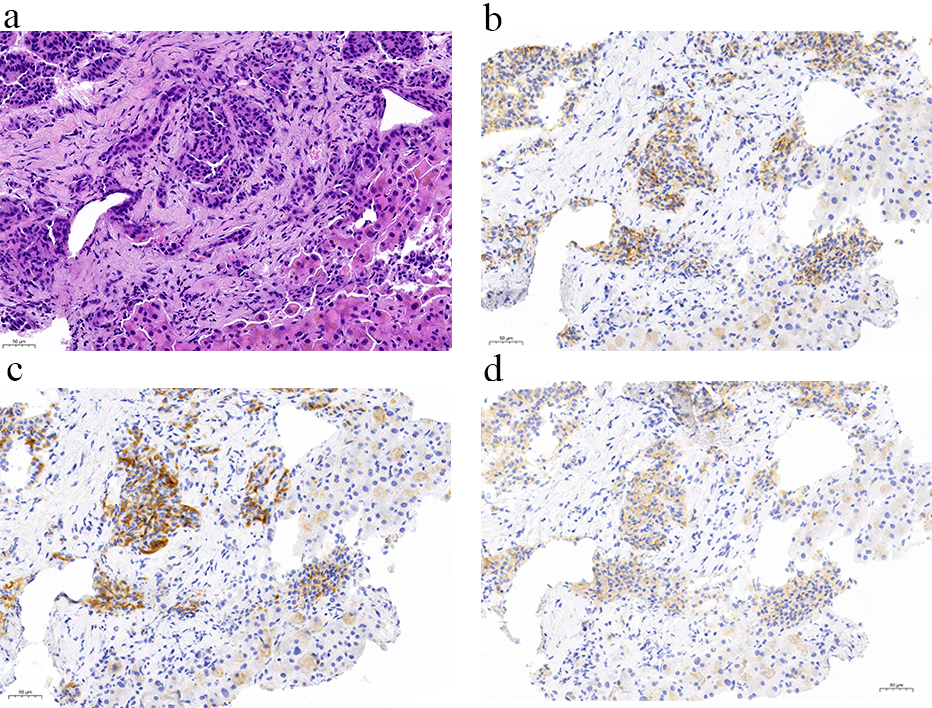 Metastasis of an adenocarcinoma of “unknown primary” in the liver. (a) Hematoxylin eosin. (b) CD56. (c) Chromogranin A. (d) Synaptophysin staining. Positivity for all neuroendocrine markers determined the neuroendocrine feature. The primary tumour is a de novo small cell neuroendocrine cancer of the prostate.

A 64-year-old patient was consulting for the appearance of a left supraclavicular mass. A thoraco-abdomino-pelvic CT scan showed disseminated supra- and subphrenical lymphadenomegalies. The examination did not identify any lesion potentially corresponding to a primary tumour, in particular there was no pulmonary nodule and no thickening of the gastric wall.

A metastatic prostate cancer could be revealed in his medical history. In fact, nine years earlier he underwent radical prostatectomy for prostate cancer (adenocarcinoma, Gleason 7, PSA: 10 ng/mL). The postoperative PSA was 0.04 ng/mL. Two years later rising PSA revealed disseminated subphrenical lymphonodular metastases. LHRH agonist and upfront docetaxel therapies were started. The PSA level fell from 38 ng/mL to a nadir of 0.52 ng/mL. At presentation the PSA level was slightly higher than the upper limit of the normal range (PSA: 4.9 ng/mL). The patient was oriented to consult at haematology.

In contrast to the expectation, histologic examination of the biopsy specimen obtained from the supraclavicular mass proved metastasis of a high grade neuroendocrine cancer (CK7+, CK20+, TTF1–, CDX2–, synaptophysin+, chromogranin+, Ki67: 40%). The diagnosis of dedifferenciated prostatic adenocarcinoma was established despite the serum marker for neuroendocrine cancer being also normal (NSE: 13.6 g/L). He underwent 6 cycles of chemotherapy with cisplatin-etoposide. At the end of the treatment there was no more palpable mass, the control CT scan showed good partial response and the markers went down, PSA: 1.4 ng/mL, NSE: 10.3 g/L. Six months later he has been still in remission (Fig. 2). Non lymphoid malignant proliferation in the left supraclavicular lymph node (hematoxylin eosin). The picture corresponds to lymphonodular metastasis of an adenocarcinoma. The primary tumour is a large cell neuroendocrine cancer of the prostate dedifferentiated from a known adenocarcinoma.

Neuroendocrine cancers may develop de novo in the prostate or result of dedifferenciation of a pre-existing adenocarcinoma under LHRH agonist treatment. Independently of the pathogenesis the composition of the cancers may be homogenous or mixed with conventional adenocarcinoma, furthermore the morphology may correspond either to small cell or large cell tumour. The clinical presentation may be typical of prostate cancer including voiding disorders or bone pain. However, in case of predominantly visceral metastases the clinical picture may be confounding and mimic all the potential signs of an adenocarcinoma of unknown primary. Subtypes of neuroendocrine cancer of the prostate from different aspects are summarised in Table 1.

Table 1.Subtypes of neuroendocrine cancer of the prostate from different aspects.

From histologic point of view small cell neuroendocrine cancer of the prostate is similar to small cell lung cancer [2]. Typical features are oat cell morphology, numerous cells in mitotic as well as in apoptotic phase, deposition of the DNA released from the damaged cells in the vascular walls (Azzopardi phenomenon). Large cell neuroendocrine cancers are rather rare.

The most frequently used immunohistochemical markers to determine neuroendocrine cancer are CD56, chromogranin A and synaptophysin. The positivity of the sample for one marker is sufficient to the diagnosis. In case of doubt of the original localisation PSA, prostate specific membrane antigen (PSMA) and P501S staining may confirm prostatic origin (although all these markers may be negative in up to 60% of cases); on the other hand TTF1 staining may orient to pulmonary origin (although neuroendocrine cancers of the prostate may also be positive in up to 50% of cases) [2].

Two cases of neuroendocrine cancer of the prostate were selected for presentation. The first case was a de novo, homogenous, small cell cancer that presented clinically as an adenocarcinoma of unknown primary giving hepatic metastases. The keys of the diagnosis were the determination of the serum NSE level and the neuroendocrine staining of the biopsy specimen. The normal level of serum PSA was misleading. The initially erroneous diagnosis and the COVID-19 resulted in substantial delay, moreover in impossibility of fulfilling the palliative treatment. The second case was a dedifferentiated, homogenous, large cell cancer that presented clinically as a lymphoma. The key of the diagnosis was the notice of non-lymphoid malignant proliferation in the biopsy specimen and the correct analysis of the immunohistochemical staining. It is interesting to note that the prostate was not sampled in either case.

For avoiding the missing of the transformation of a prostatic adenocarcinoma into neuroendocrine cancer the follow-up should include in addition to PSA controls regular physical and abdominal ultrasound examinations. The realisation of restaging CT scans is recommended in regular intervals and in case of suspicion of disease progression even in the absence of PSA rise. In cases when PSA level is not congruent with disease extension or the progressive disease turns out to be resistant to the standard treatment the possibility of neuroendocrine transformation should be checked systematically.

There are numerous tentative under investigation to identify sets of genomic (e.g., TP53, RB1, CYLD, AR) and epigenomic (e.g., hypo- and hypermethylation) alterations applied either to biopsy specimens [4] or to circulating tumour DNA [5] for the early identification of neuroendocrine transformation of a prostate cancer resistant to castration.

The first treatment choice for neuroendocrine cancer of the prostate is chemotherapy by the combination of cisplatin-etoposid [6]. The second case shows that correct treatment may allow relatively good prognosis. Furthermore, innovative drugs such as checkpoint inhibitors and aurora kinase A inhibitors are under investigation [7].

All authors participated in the management of the patients. TK and KN prepared the manuscript. SA and SZ contributed to data collection. The final version was read and accepted by all co-authors.

For this study, ethical approval is not required. Both patients gave their written consent to the publication of the case reports.

Metastasis of an adenocarcinoma of “unknown primary” in the liver. (a) Hematoxylin eosin. (b) CD56. (c) Chromogranin A. (d) Synaptophysin staining. Positivity for all neuroendocrine markers determined the neuroendocrine feature. The primary tumour is a de novo small cell neuroendocrine cancer of the prostate.