Androgen deprivation therapy (ADT) is the most commonly used treatment for advanced prostate cancer (PCa); however, most patients still progress to castration-resistant prostate cancer (CRPC) [1]. Several agents have emerged for the treatment of CRPC, including docetaxel (Doc), abiraterone (Abi), Enzalutamide, Cabazitaxel, Radium-233 and Sipuleucel-T, these drugs not only significantly inhibit tumor progression but actually improve OS [2, 3, 4]. Among these agents, Doc and Abi are most commonly used in China due to their recent availability [5]. However, a proportion of patients are still not sensitive to Doc, Abi or Enzalutamide, and all eventually acquire secondary resistance; however, the mechanism of this remains unclear [6]. One plausible mechanism for agent resistance is the existence of androgen receptor variants (AR-Vs); androgen receptor splice variant 7 (AR-V7) is the most common subtype of AR-Vs, its activation didn’t require the combination of androgen with androgen receptor leading to the therapy resistance [7], and it is much more common in CRPC than in localized PCa [8]. Our clinical study sought to investigate the association between AR-V7 status with resistance to Abi and Doc as well as time-to event outcomes in men with metastatic castration-resistant prostate cancer (mCRPC), which is one of the first studies regarding that.

Peripheral blood samples for analysis of CTCs were obtained from eligible patients before receiving Abi or Doc. CTCs collection protocol: 5 mL venous blood was collected by a vacuum blood collection vessel containing EDTA; the vessels were immediately sent to laboratory or stored in a 4 C refrigerator for less than 48 hours. A human peripheral blood leukocyte removal kit was used to lyse red blood cells, and an immune micromagnetic particle method was used to remove white blood cells through negative screening of immunomagnetic beads. In this study, two kinds of magnetic beads, both of which are super-paramagnetic beads with a diameter of 4.5 meters, were used as a covalently coupled mouse–human anti-human CD45 antibody and as a monoclonal anti-human CD14 antibody. The remaining cell suspension was concentrated to collect CTCs and mixed with 100 L separation buffer, which was stored at –20 C [6, 9]. A self-referenced CTC unit derived from a standard curve was used to indicate the abundance of CTCs in 5 mL venous blood.

In patients where CTCs were detected, a computer- based random distribution was used to randomized patients to receive either Abi or Doc, ADT therapy was continued in all the patientsAR-V7 mRNA in CTCs was detected before patients received Abi or Doc. Total prostate specific antigen (tPSA), free PSA, f/t PSA ratio (the ratio of free PSA to total PSA) and serum testosterone was detected every 1–2 months. Emission-computed tomography (ECT) bone scan, magnetic resonance imaging (MRI) and computerized tomography (CT), including chest-, abdomen- and pelvis- or prostate-specific membrane antigen (PSMA) PET-CT were performed every 2 to 3 months to determine the number and diameter of bone and soft tissue lesions (10 cases with PSMA PET, 129 with ECT bone scan, MRI and CT).

Follow-up data was assessed after enrollment: (1) PSA RR—proportion of patients with PSA response, and patients with PSA response were defined as PSA that declined 50% from baseline and maintained for 4 weeks after receiving agents according to Prostate cancer working group 2 (PCWG2) criteria [12]; (2) PSA PFS—time free from PSA progression, and PSA progression was defined at a level of PSA 2 ng/mL that increased 25% above the nadir; (3) clinical PFS—time free from clinical progression, and clinical progression was defined as a worsening of cancer-related symptoms or new cancer-related complications according to Zubrod performance status (ZPS) criteria [6]; (4) radiographic PFS—time free from radiographic progression, which was defined as an increase in the diameter of soft tissue metastatic lesions by 20% or 2 new metastatic bone lesions observed through imaging according to response evaluation criteria in solid tumors (RECIST) guidelines [10]; (5) cancer-specific survival (CSS), time to death because of tumor progression by death certification; (6) PSA responding time (PSA RT), which was defined as PSA response (PSA decreased by 50% from the baseline) [12] at any time after being treated with Abi or Doc; (7) hormone-sensitive duration time (HSDT), which was defined as disease progression (any one of radiography, PSA or clinic progressed) any time after the initial application of ADT therapy.

Measurement data conforming to normal distribution analyzed by Shapiro–Wilk test are represented as mean standard deviation (SD), and an independent sample t-test was used for comparison between groups. Data on categorical variables are presented as frequency with percentages and differences among groups are analyzed with Pearson’s chi-square test or Fisher’s exact test as appropriate. Kaplan–Meier and log-rank tests were used to evaluate the PFS and CSS in different subgroups and a survival curve was described. Multivariable COX mode was used to assess the relationship between detection of AR-V7 in CTCs and prognosis in patients receiving abiraterone, adjusting for age, baseline PSA level, Gleason score and visceral metastasis. The software used to run the analysis was IBM-SPSS version 20 (Chicago, IL, USA). All tests were two-sided, with a p 0.05 considered to indicate statistical significance. 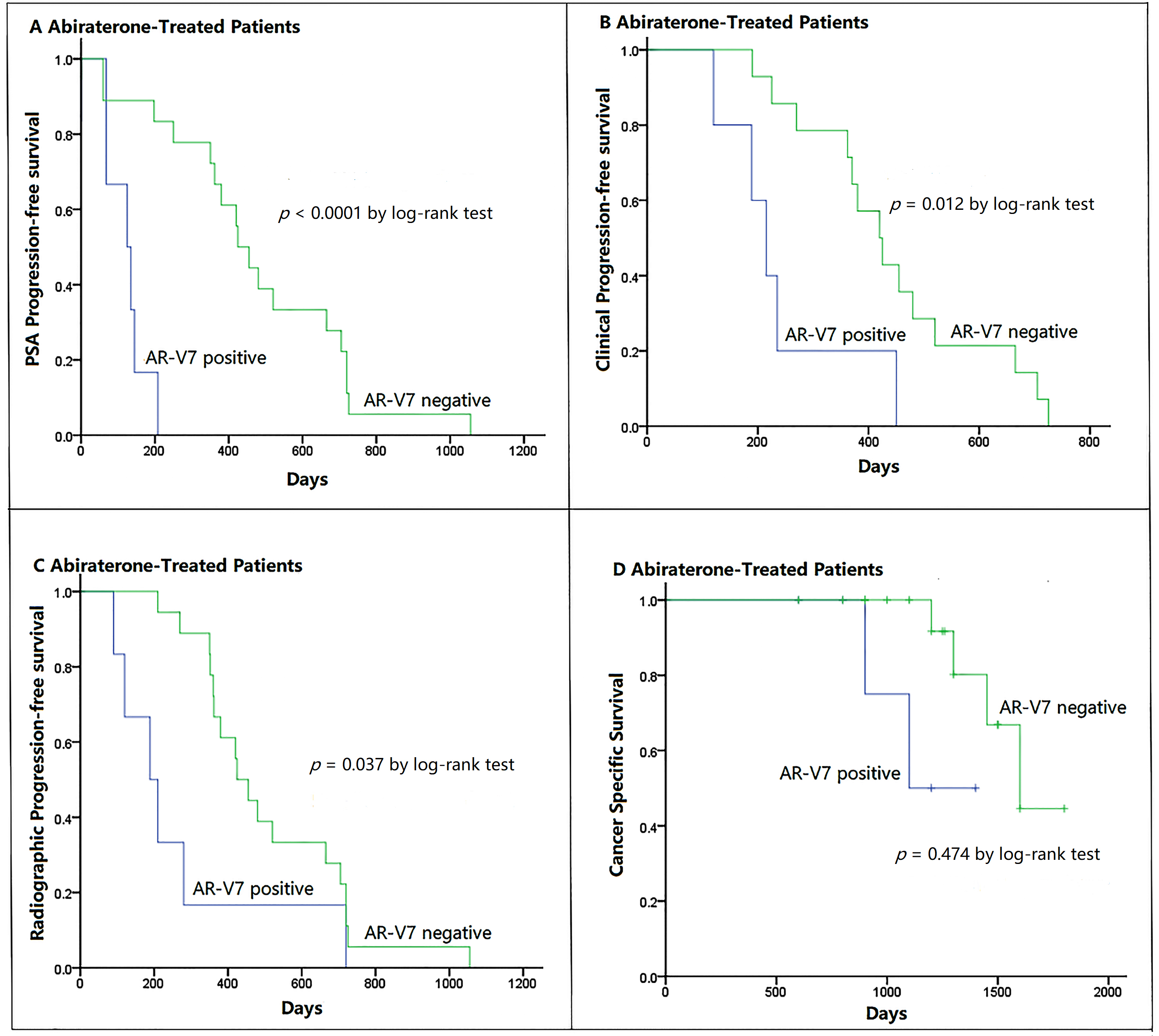 3.2.3 Comparison of time-to-event outcomes between Abi and Doc in AR-V7-positive patients

Among 49 AR-V7-positive patients, PSA RR was significantly lower in Abi-treated patients than in Doc-treated patients, while PSA RT was significantly longer (Table 3). PSA PFS and radiographic PFS of Abi were significantly shorter than Doc; clinical PFS and CSS of Abi were shorter but the difference was not statistically significant (Table 3). A Kaplan–Meier analysis model was used to evaluate the association between agents and time-to-event outcomes in AR-V7-positive patients, and Abi was associated with shorter PSA PFS and radiographic PFS but not clinical PFS and CSS (Fig. 2). In a multivariable COX model adjusted for the baseline PSA level, Gleason Score, age and vesical metastasis, Abi remained an independent risk factor associated with shorter PSA PFS and radiographic PFS (Table 5, Ref. [1]). 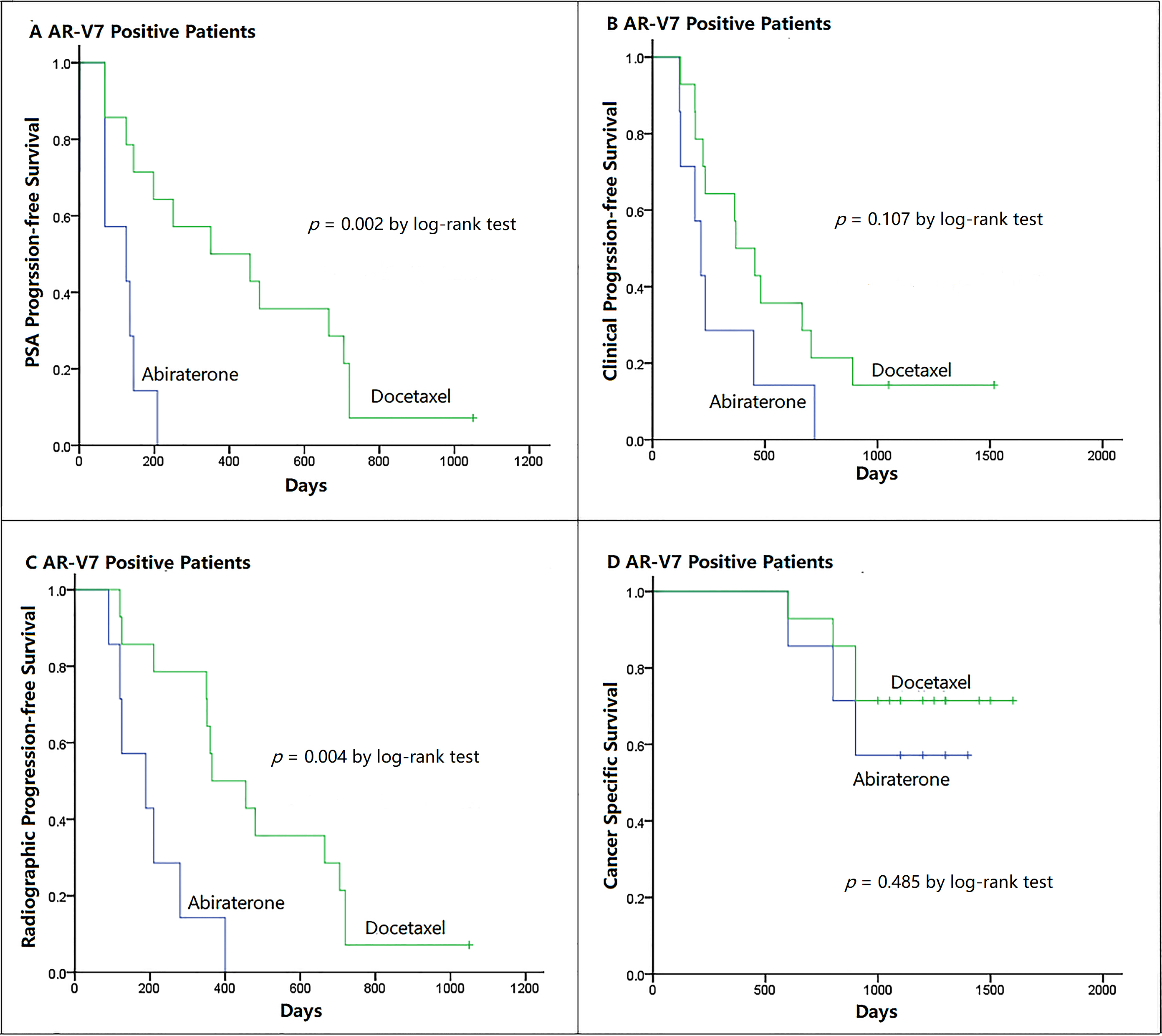 This study evaluated the association of AR-V7 status and Abi resistant in mCPRC patients. According to multivariable COX model we concluded that AR-V7 was the independent factor associated with Abi resistant and might be used as a biomarker guiding treatment strategy, the result was consistent with results of previous studies [6]; we also found that in AR-V7 positive patients, the HSDT time and PSA RR was much lower while PSA RT was much longer than that in AR-V7 negative patients, AR-V7 might be associated with the rapid tumor progression in mHSPC phase, and influence the therapy efficiency of Abi in mCRPC phase due the longer PSA RT and lower PSA RR, to our knowledge, there is little or no information in the literature regarding that. Since the mechanism of CRPC is complicated and not well understood, recently some studies suggested that AR-Vs might be associated with CRPC [13]. As a subtype of AR-Vs, studies found that AR-V7 is more common in CRPC than in mHSPC and local PCa, it might be associated with tumor progression [14, 15]. Another study shows the same conclusion that the presence of AR-V7 is responsible for tumor progression [9]. Abi and Doc are the most commonly used agents for CRPC in China. However, the response rate for Doc is about 50%, yet half of men do not benefit from it. The mechanism of agent resistance has been detected by many studies [15, 16, 17, 18, 19] but the mechanism is still unknown. In recent years, several studies began to detect the association of AR-V7 status and therapeutic outcomes of Doc. Research in 2015 analyzing AR-V7 mRNA in CTCs in 37 CRPC patients who received Doc has shown that AR-V7 positive is not associated with PSA RR and PSA PFS [20]. Thadani Mulero, et al. [21] claimed thatAR-V7 is associated with Doc resistance while AR-V567es is not. Another study suggested that AR-V7 could affect the efficiency of Doc only when above a certain level [22].

The association of AR-V7 with Doc resistant is still controversial. In our study, clinical data support the claim that AR-V7 status is not associated with the therapeutic efficiency of Doc. As for Abi, our study supports a growing body of literature suggesting that PCa patients with AR-V7 positive were resistant to Abi [7, 23, 24]. Hu R, et al. [9] claimed that AR-V7 is commonly expressed in CRPC and the response rate of Abi is low. Another clinical study claims that there is a strong association between the presence of AR-V7 in CTCs and resistance to Abi [6], and a subsequent study shows that, in AR-V7-positive patients, Doc is more beneficial than Abi or Enzalutamide; however, the scale of this study is small, with only 37 patients included [19]. A prospective study enrolled 118 CRPC patients treated with Abi or Enzalutamide, showing that AR-V7 positivity is associated with shorter PFS and OS [25]. Our study supports the claim that AR-V7 positivity is associated with Abi resistance in mCRPC patients as previous study reported, and clinical data suggest that AR-V7 positivity is strongly associated with a higher Gleason Score, lower PSA RR, and shorter HSDT and PFS (PSA, clinical and radiographic) which all suggested a poor prognostic of AR-V7 positive patients. In fact, the frequency of AR-V7-positive patients was higher in our cohort than in previous work [6], raising the possibility of an association between AR-V7 positivity and ethnicity. From the results of our research, the role of AR-V7 in guiding treatment strategy was reliable. Thus, tremendous time and money could be saved as a recent study presumed that USD 1.5 billion could be saved if AR-V7 detection were to be used for agent selection in CRPC [26].

This study still has some limitations. First, the short follow-up time; second, not all CRPC patients have deteactable CTCs, which may limit the role of AR-V7 in CTCs as predictive marker for agent resistance; third, inconsistent imaging methods may cause bias; fourth, not all the factors (i.e., comorbidities) related to the prognostic of PCa were included, this may cause bias. Further studies are required.

PD and SW designed the study. SW, YC and XT made the same contributions to this study as the first co-author. SW, YC, XT, JM, ZY, YY and XY performed the study and analyzed the data. PD and SW wrote the manuscript draft and revised the manuscript. All authors have read and agreed to the published version of the manuscript.

This study was conducted according to the guidelines of the Declaration of Helsinki, and approved by the Institutional Review Board of Peking University Cancer Hospital and Institution in April 2018 (protocol code 2018KT27). All the patients signed informed consent before enrollment.

This research was funded by Capital Clinical Characteristics and Application Research Project. Project No: Z18110700170000.

The data presented in this study are available on request from the corresponding author. The data are not publicly available due to privacy of patients.