The pathophysiology of male lower urinary tract symptoms (LUTS) is complex and multifactorial. A common cause of LUTS is benign prostatic hyperplasia (BPH). A key morphological parameter of the enlarged prostate that influence bladder outlet obstruction (BOO) is the intravesical prostatic protrusion (IPP) [1, 2]. The IPP is defined as the protrusion of the prostate into the lumen of the bladder. IPP thus refers to the morphological disorder without specifying which anatomical structure it is formed by. The IPP may be caused by the middle lobe and/or lateral lobes (Fig. 1A and B) [3]. Prostatic artery embolization (PAE) is an emerging minimal-invasive therapy of BPH, able to reduce the prostatic volume (PV) and the IPP [2, 4, 5, 6, 7]. True Middle Lobes (TML) are technically difficult to embolize (Fig. 1D) and are considered to be a relative contraindication to PAE [8]. To the best of our knowledge, there is currently no publication that has investigated the effect of PAE on TML improvement in patients with LUTS. Only patients in whom the IPP was formed only by the TML were included in this study. 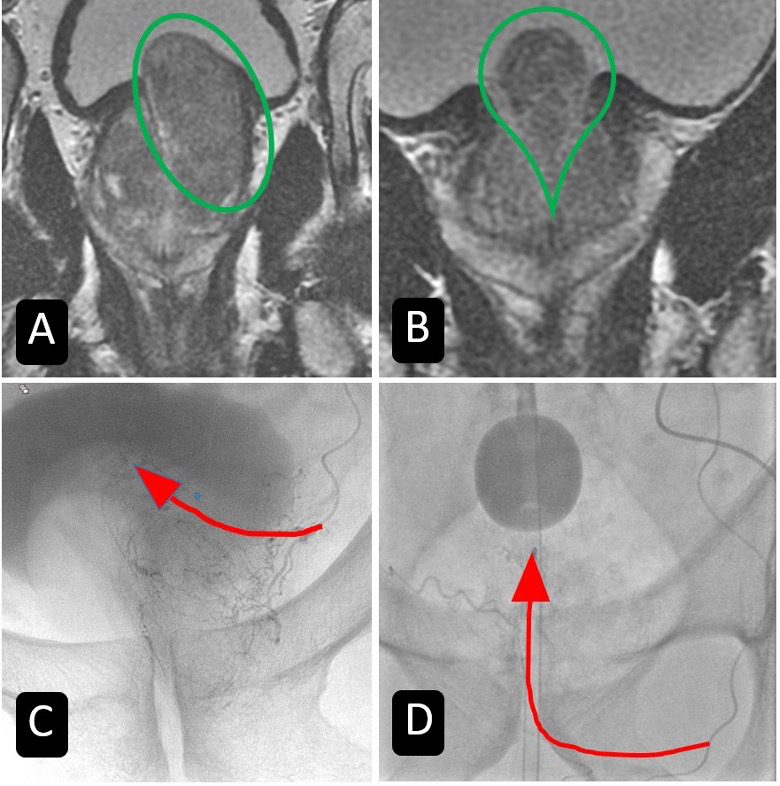 A retrospective analysis was done of 47 men with TML treated with PAE from April 2015 to September 2021. The IPP, the prostatic urethral angle (PUA), and the volume of the TML (TMLVol), were measured on MRI prior and 2 months after PAE. The IPP was measured on the midsagittal plane in T2-weighted MR-images of the prostate as the shortest perpendicular distance between the protruded end of the prostate and the bladder base on the bladder neck in the sagittal plane. The PUA was measured as the angle between the prostatic urethra and the membranous urethra in the midsagittal plane also at MRI. The volume of the TML was measured in the multiplanar MRI using the volume formula a b c/2; where a, b, and c are the diameters in all three spatial directions. During embolisation of the TML, we targeted the TML-supplying artery shown in Fig. 1. In order to ensure that the target vessel supplies the entire TML, we performed a pre-therapeutic (i.e., before embolisation) simulation using a capillary cone beam CT (cCBCT) in all cases. The technical success of PAE of the TML, defined as a complete devascularization of the TML was evaluated on contrast-enhanced MRI (ceMRI) 48 hours after therapy. Patients with urologic tumors, neurogenic bladder, urinary tract infection, bladder stones, which could affect voiding, were excluded. PAE was carried out with calibrated spheric embolic agents with a diameter of 300–500 m (Merit Embospheres®). SPSS ver. 13.0 (SPSS Inc., Chicago, IL, USA) was used for statistical analysis. p-values of 0.05 were considered statistically significant. 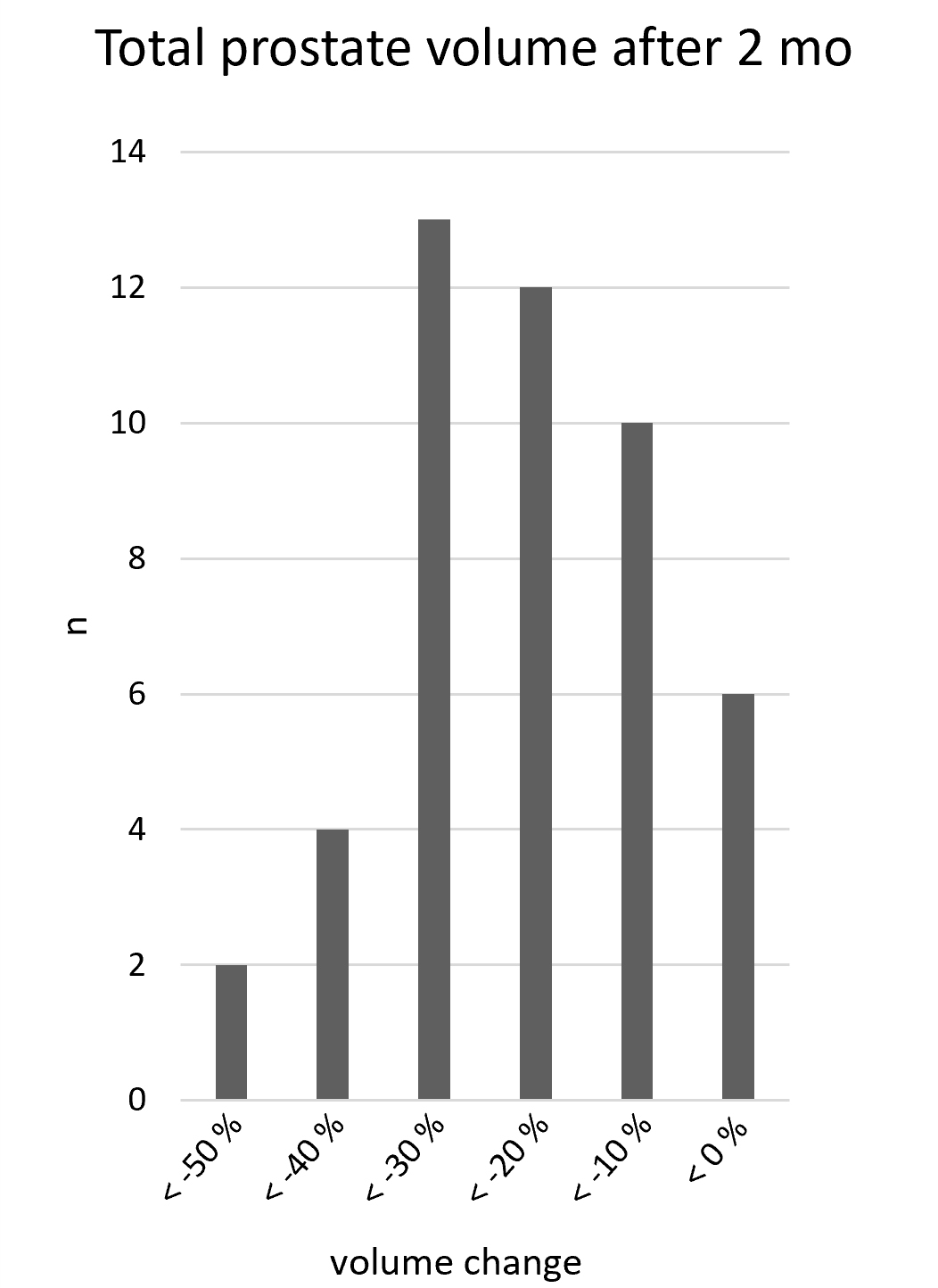 Course of the true middle lobe volume (TMLVol) two month after the prostatic artery embolization (PAE). There is significant volume reduction of the TML after successful embolization with most cases presenting a 10–50% reduction. 29 out of 34 patients (85.3%) with successful TML devascularization showed a significant reduction of TML volume of greater than 10%. By contrast, without devascularization TML volume is almost indifferent. 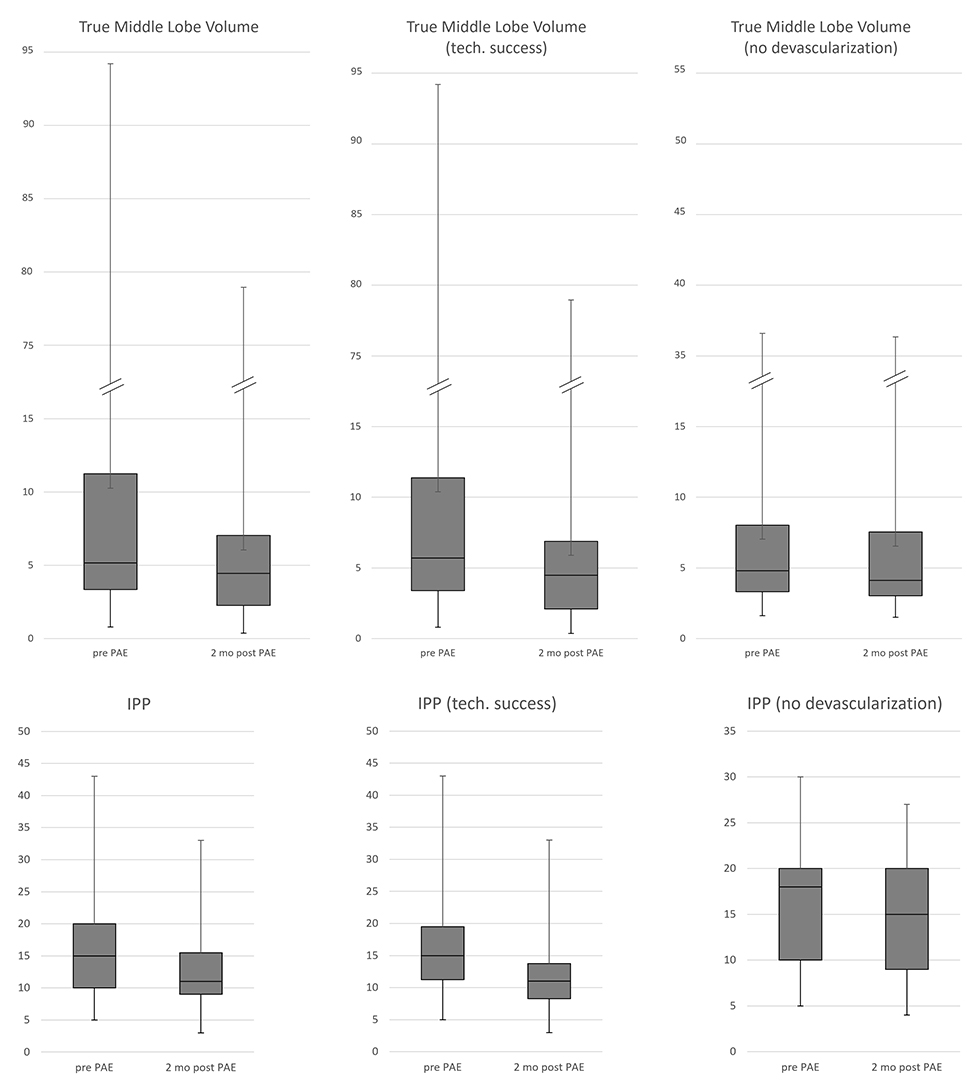 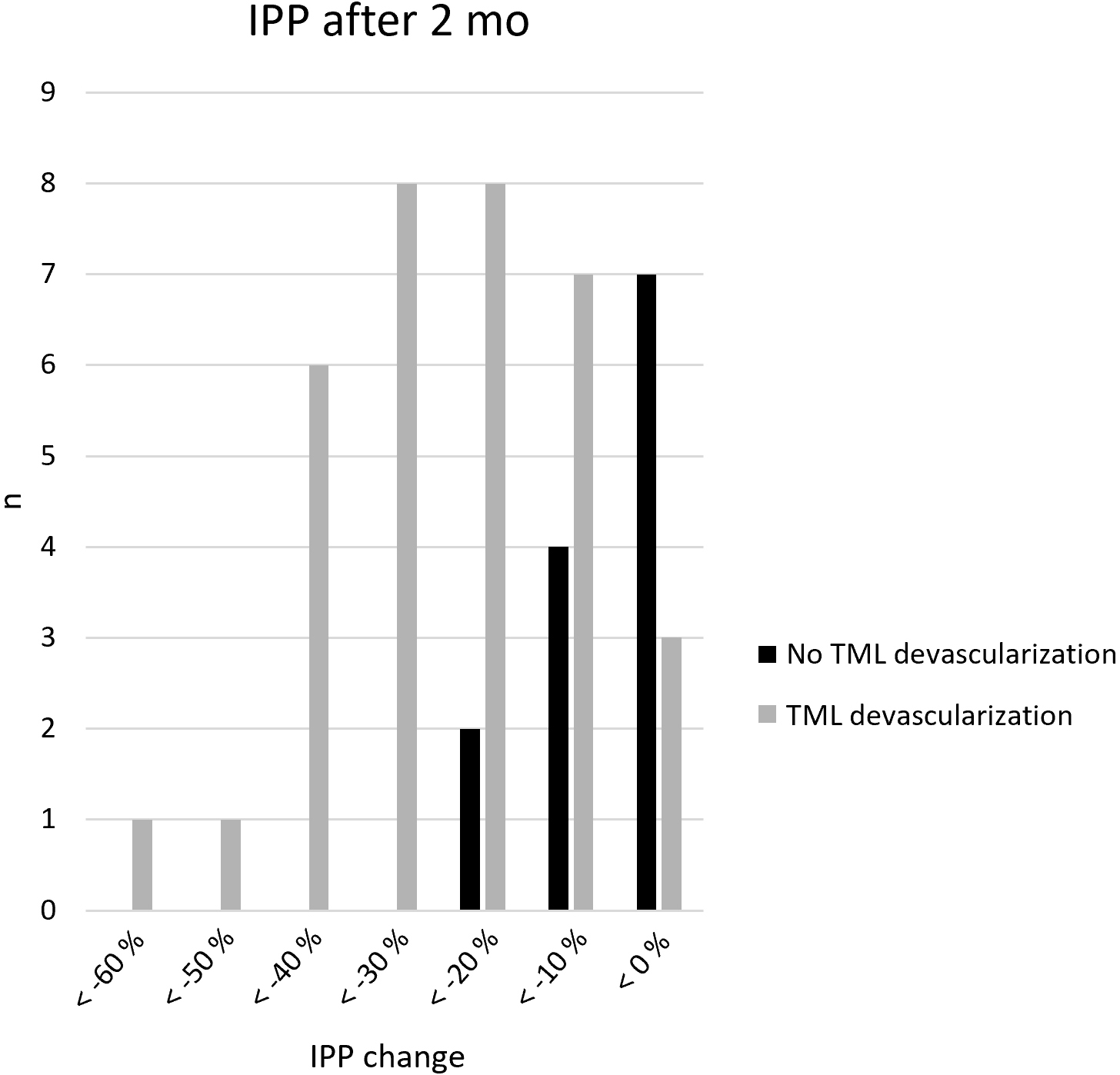 Course of the intravesical prostatic protrusion (IPP) two month after the prostatic artery embolization (PAE). Accordingly, to the TMLVol (Fig. 3), considerable IPP reduction was achieved after successful embolization of the TML: In 31 out of 34 cases (91.2%) IPP decreased significantly after successful TML devascularization. By contrast, without complete devascularization of the TML, IPP stayed indifferent or showed only a slight reduction.

In 8.5% (4/47) of patients, a mild postembolisation syndrome was seen in the first two days after PAE. Postembolisation syndrome (PES) summarise temporary dysfunctional disorders, that may occur in the first days after treatment. These temporary complaints (urodynia, urine discolouration, and spasms) can usually be effectively controlled by non-steroidal anti-inflammatory drugs (NSAIDs) such as ibuprofen p.o., usually combined with a proton pump inhibitor. In case of spasms a combination with spasmolysis is suggested. Additional analgetics are generally not required.

The median dose area product (DAP) was 75.35 Gycm, which corresponds to an effective dose (ED) of 19 mSv.

We here present the first single centre retrospective study proving the positive effect of PAE not only on the reduction of PV, IPP and PUA, but also on the volume of TML (Fig. 6). Our results suggest that IPP and TML are two closely physiologically linked parameters. Further, the TML, has only a subordinate role on PUA.

While BPH represents a histological diagnosis, LUTS comprises a symptom complex. BPH is a common cause of LUTS, predominantly in older men [8]. In fact, a variety of conditions can lead to LUTS, so that only about a quarter to half of patients with proven BPH also have LUTS, and conversely, of men with LUTS, only about 50% have urodynamically proven BOO. Although the prevalence is high, many questions about the pathogenesis of LUTS remain rather incompletely answered [9, 10].

Clinically, the diagnosis of BPH and BOO is usually made based on PV 40 mL, a maximum flow rate (Q) 10 mL/s, in combination with a high IPSS [9]. Many clinical studies have demonstrated that LUTS have poor diagnostic specificity for BOO, moreover the correlation between PV and LUTS severity is weak [7, 10].

It is well studied and known that the effect of PAE goes beyond volume reduction alone [11]. The reason lies in the variety of therapeutic effects of PAE and their synergistic effects: (1) shrinkage of the enlarged prostate gland as a result of ischemic infarction, (2) relaxation of the increased prostatic smooth muscle tone by reducing the prostate stroma and additionally -adrenergic denervation, (3) the softening effect of nitric oxide pathway, (4) blockage of androgen circulation into the prostate, and (5) ischemia-induced apoptosis [11].

Our study is one of the first to evaluate changes in TML as well as in IPP following PAE. The IPS-score correlate only partially with prostate enlargement, BOO and LUTS [12]. Further, there is no fixed correlation between PVol, and BOO [13]. Eckhardt MD et al. [14] demonstrated in a study from 2001, that patients with LUTS primarily suffer from storage symptoms, particularly urge incontinence and nocturia. The particular burden of irritative storage symptoms has been confirmed by follow-up studies [15, 16]. Therefore, as is so often the case in the relevant literature, it is only of limited use to take the total volume of the prostate as a reference value for the success of the therapy and as a morphological correlate for clinical improvement.

IPP is of increasing interest in the context of PAE. The prevalence of IPP is reported to be 27% in Caucasians aged 41–88 years. IPP and BOO index correlate positively with each other, whereas drug therapy strategies and significant IPP correlate negatively. Analogous to IPP, TML must also be scientifically evaluated, especially since the enlarged middle lobe originating from the periurethral zone often leads to mechanical bladder outlet obstruction. In addition, hyperplasia of the lateral lobe originating from the transition zone may also be involved in IPP. Pathophysoplogically, IPP produces a type of “ball valve” obstruction that disrupts the funnel effect of the bladder neck and leads to dyskinesias of the bladder muscles during voiding [17].

Downsizing of the middle lobe resulted in a significant decrease in the mean IPP index three months after PAE in a prospective study of 18 patients. This in turn correlated with the IPS score and it was concluded that approximately 40% of the change in clinical relief of IPSS could be explained by a decrease in the IPP index [18]. Another analysis stratifying IPP patients by thickness-to-height ratio (T/H ratio), using a cut-off value of 1.3, found that IPP with a T/H ratio 1.3 correlated with suboptimal IPSS at 12 months (p = 0.025) and suboptimal QoL at 6 months (p = 0.025) and 12 months (p = 0.008) [19]. In addition, complications such as de novo AUR seemed to occur more frequently in patients with IPP. However, even with successful devascularisation of the IPP, BOO may worsen and AUR may develop due to the valve effect. This highlights the need for further investigation of stratified IPP parameters and their predictive potential in clinical practice.

The increasing prevalence of BPH and dissatisfaction with conventional therapies for LUTS have paved the way for new, minimally invasive, continence- and ejaculation-preserving treatment strategies and individualised therapeutic approaches. This is reflected in the EAU recommendations, which take into account not only the feasibility and expected symptom relief of each procedure, but also patient preferences and expectations for efficacy, side effects, quality of life and disease progression. Minimally invasive therapies are expanding the therapeutic spectrum for BPH-related LUTS, with equivalent medium-term outcomes in terms of IPS score and superior outcomes for side effects and ejaculation maintenance compared with TUR [9].

Especially in the context of modern, low side effects and individualized therapy of LUTS, the knowledge, that PAE can effectively reduce the TML is an important scientific finding.

The perioperative risk of bleeding and anaesthesia and, in the medium term, incontinence, impotence and retrograde ejaculation are serious side effects of conventional BPH treatment for patients, which often justify their refusal. The fact that PAE is almost free of complications when performed correctly is perhaps the most important advantage of PAE, leading to high patient satisfaction and acceptance. From the perspective of the interventional radiologist, PAE is a technically demanding procedure the complexity of which places high demands on anatomical knowledge, technical skills and equipment. The radiologist must possess extensive experience in embolization therapy. Image guidance using a high-resolution angiography system combined with the C-arm CT are advantageous and are required as a necessary safety standard for performing PAE. The C-arm CT, also known as cone beam CT (CBCT), is indispensable for simulating embolisation before the procedure. Non-target regions can be detected much more reliably, so that in these cases either the microcatheter must be positioned even more selectively or, if not possible, embolisation must unfortunately be dispensed with [7]. If the disease continues to progress despite the successful procedure, surgical interventions ranging from TUR to HoLEP to MIST are still possible without restriction. PAE should therefore not be considered a replacement for established surgical procedures within the therapeutic algorithm of LUTS, but rather a bridging therapy between exhausted conservative treatment options and surgery in patients with moderate to severe storage-dominated symptoms [2, 4, 6, 7, 20].

Although the PAE has many advantages, it also has some disadvantages worth mentioning. A method inherent limitation of the PAE is the applied radiation exposure. The median dose area product (DAP 75.35 Gycm) and effective dose (ED 19 mSv) measured in our study population was significantly lower than in comparable publications (176.5 Gycm) [17]. 19 mSv equates in average with a 0.07% additional lifetime cancer risk in a 60-year old man. This corresponds to the radiation exposure of an EVAR, for example [21, 22]. The low radiation exposure in our collective is largely due to a very structured and radiation-hygienic protocol, in accordance with the recommendations of the European Professional Society (CIRSE Academy Course “Prostate Artery Embolization”).

The amount of radiation exposure depends significantly on the constitution of the patient as well as the duration of the intervention. The latter depends, among other things, on the extent of atherosclerosis and the diversity of the vascular supply of the prostate. Unnecessary radiation exposure can be avoided in severe atherosclerosis by performing a CT or MR angiography prior to the intervention, which shows the vascular anatomy and helps to preselect technically difficult cases [5]. A limitation of the study presented herein are the missing long-term results.

The IPP, regardless of whether it is formed by the lateral lobe or the middle lobe, should be considered as an important clinical factor in male LUTS management. PAE is currently considered a potential link between the exhausted medical management and more or less radical resection-based interventions. Our study found that PAE is able to reduce the IPP even if it is formed exclusively by a TML. Particularly in view of the fact that patients with larger IPPs respond less well to different drug therapies, minimally invasive therapy options must be researched for the targeted therapy of IPP and, equivalently, TML.

The participants were informed about the study procedures and a written informed consent was signed. The study was conducted in accordance with the Declaration of Helsinki, and the protocol was approved by the local ethics committee of Universitätsklinikum Schleswig-Holstein, Campus Lübeck (approval number: 17 – 237A, August 2017).