The supply of the most cutting-edge digital devices, such as smartphones, has increased due to technological development, providing people with opportunities to easily access social media platforms. Through these platforms, people can not only view others’ lifestyles, but also project how they live to other users. However, owing to the characteristics of social media platforms, people tend to portray their lives in a positive light rather than a true reflection of reality [1, 2]. In other words, they are likely to show virtual situations of their lives that are more positive than their actual situations, such as delicious food, excellent products, and muscular bodies [3]. The long-term influence of traditional media, including television programs and fashion magazines, has contributed to establishing a social atmosphere where people admire body images of slim women and muscular men [4]. The term “body image” refers to individuals’ sentiments and attitudes about their own bodies. This concept reflects not only individuals’ self-perceptions of their own bodies but also others’ perceptions of them [5]. The results of the analysis regarding the effect of body image on individuals indicate that a positive body image is highly associated with high self-esteem, positive sentiments, and social behaviors [6]. In contrast, it has been reported that a negative body image might threaten mental health by causing low self-esteem and negative emotions or sentiments [7, 8, 9]. As such, body image serves as a variable that affects individuals’ psychological and social behaviors. This variable can be adjusted through physical activity [10].

Physical activity has positive effects on enhancing individuals’ body image, self-esteem, and overall confidence throughout their lives [11]. Those who exercise regularly show higher satisfaction with their body images than those who do not [12, 13]. Additionally, those who recognize their body image positively tend to participate in exercise more actively than those who recognize their body image negatively [14, 15]. Markland [16] analyzed the relationship between people’s discrepancies concerning their perceived body sizes and physical activity and found that their level of emotional dissatisfaction and sense of shame about their bodies increased as their weight increased or self-discrepancies in their body images increased [17]. As for the phenomenon in which numerous people actively engage in physical activity to shape their ideal body image [18, 19], self-discrepancy theory states that people take such action as part of their efforts to reduce the gap between their actual and ideal body images [20].

Markland [16] explained the relationship between self-discrepancy and physical activity in terms of behavioral regulation or Self-Determination Theory (SDT). SDT is a representative concept of motivation used to explain the reasons for people’s constant exercise or participation in physical activity [21]. Motivation provides information that can be used to understand individuals’ decisions and determine the direction, strength, and continuity of their behavior. Thus, participation in any form of physical activity, including sports, is closely related to motivation [22]. Deci and Ryan [23] classified the motivation to engage in activities into three types: individually controlled behaviors, that is, planned activities (intrinsic motivation), behaviors controlled by external forces (extrinsic motivation), and behaviors performed without motivation (amotivation). The aforementioned types of motivation are not oppositional to each other but appear in diverse forms on a continuous line according to the degree of self-determination [23]. Extrinsic motivation comprises external regulation, introjected regulation, and identified regulation, according to the level of self-determination in ascending order [24]. Intrinsic motivation occurs when people exercise to obtain essential pleasure and satisfaction from their exercise behaviors, whereas extrinsic motivation arises when people exercise to achieve other specific purposes (e.g., a desire to lose weight or to get in better shape) [25]. Previous studies examining the relationship between self-determined motivation and exercise behaviors reported that those who possess a strong sense of self-determined motivation are likely to actively participate in consistent exercise [26, 27].

As described in the aforementioned theories, self-determination plays a crucial role in motivating individuals to consistently engage in physical activity. However, participation intention might differ according to each individual’s situation. As the younger generation (i.e., Generation Z) is accustomed to exhibiting themselves on social media platforms, pleasure or satisfaction obtained through body shaping can be a more significant motivating factor than participation in exercise for health. In various industries, it has been already considered that the MZ generation has a different tendency from the previous generation [28]. In particular, Generation Z, born from 1995 to 2010, shows a distinct difference from the Baby Boomers (1946–1964) and Generation X (1965–1978) [29]. Thus, the degree to which self-determined motivation affects exercise adherence varies according to the self-discrepancy in body image, which indicates a difference between the ideal and perceived body images of individuals. Rodin [30] argued that people prefer a slim and thin figure, which is commonly admired in modern society, and that more than 40% and 50% of men and women, respectively, were not satisfied with their body images.

Thus, this study analyzed the effect of self-determined motivation on exercise adherence intention by focusing on members of Generation Z, who are skilled at using social media platforms and tend to actively expose themselves to others using these platforms. In addition, this study investigated the moderating effect of satisfaction with body image and gender between self-determined motivation and exercise adherence intention. Consequently, this study established the following research problems and a research model (Fig. 1):

Research Problem 2. Self-determined motivation of Generation Z will have different effects on their exercise adherence intention according to gender and perceived satisfaction with their body image. 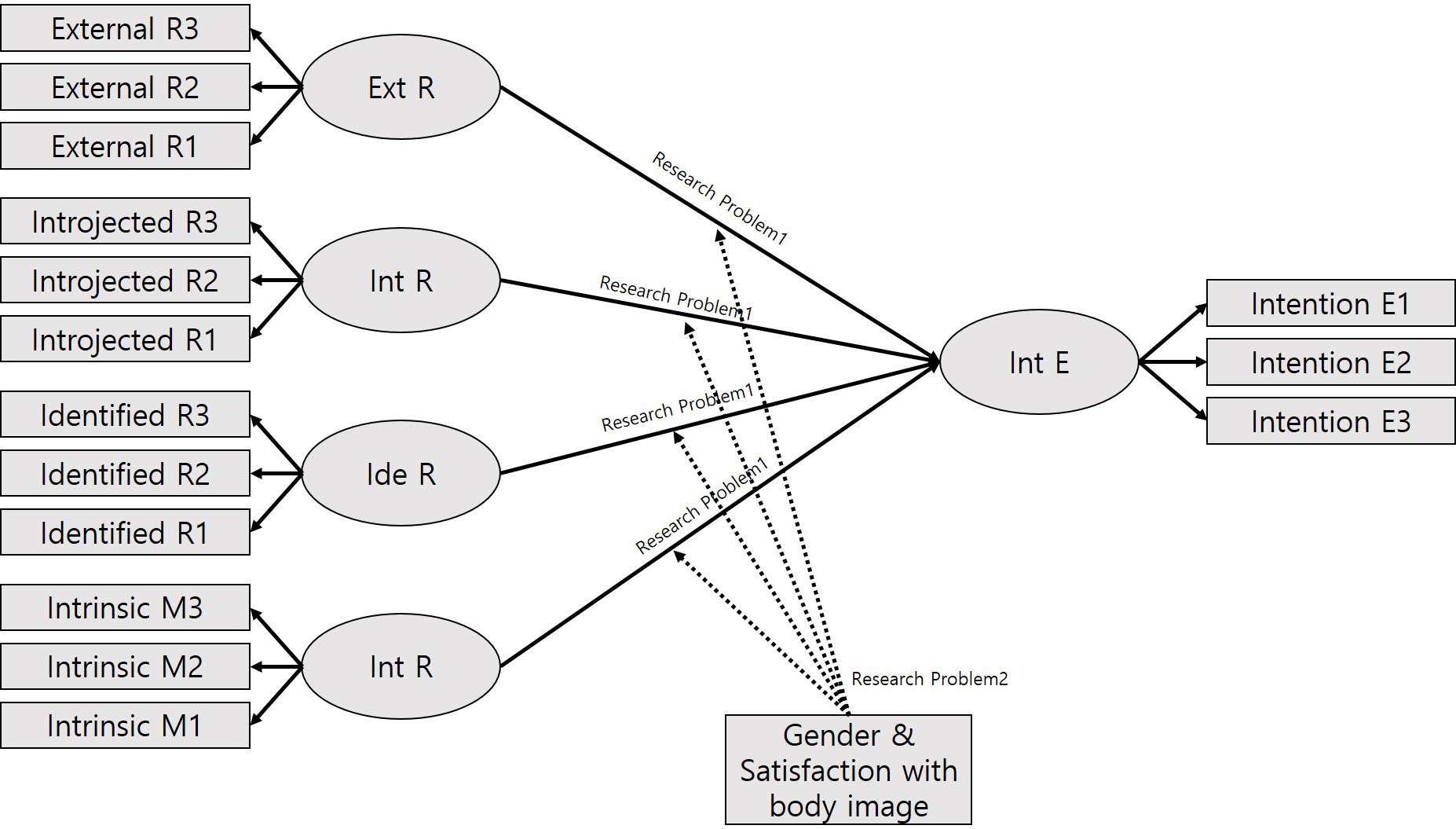 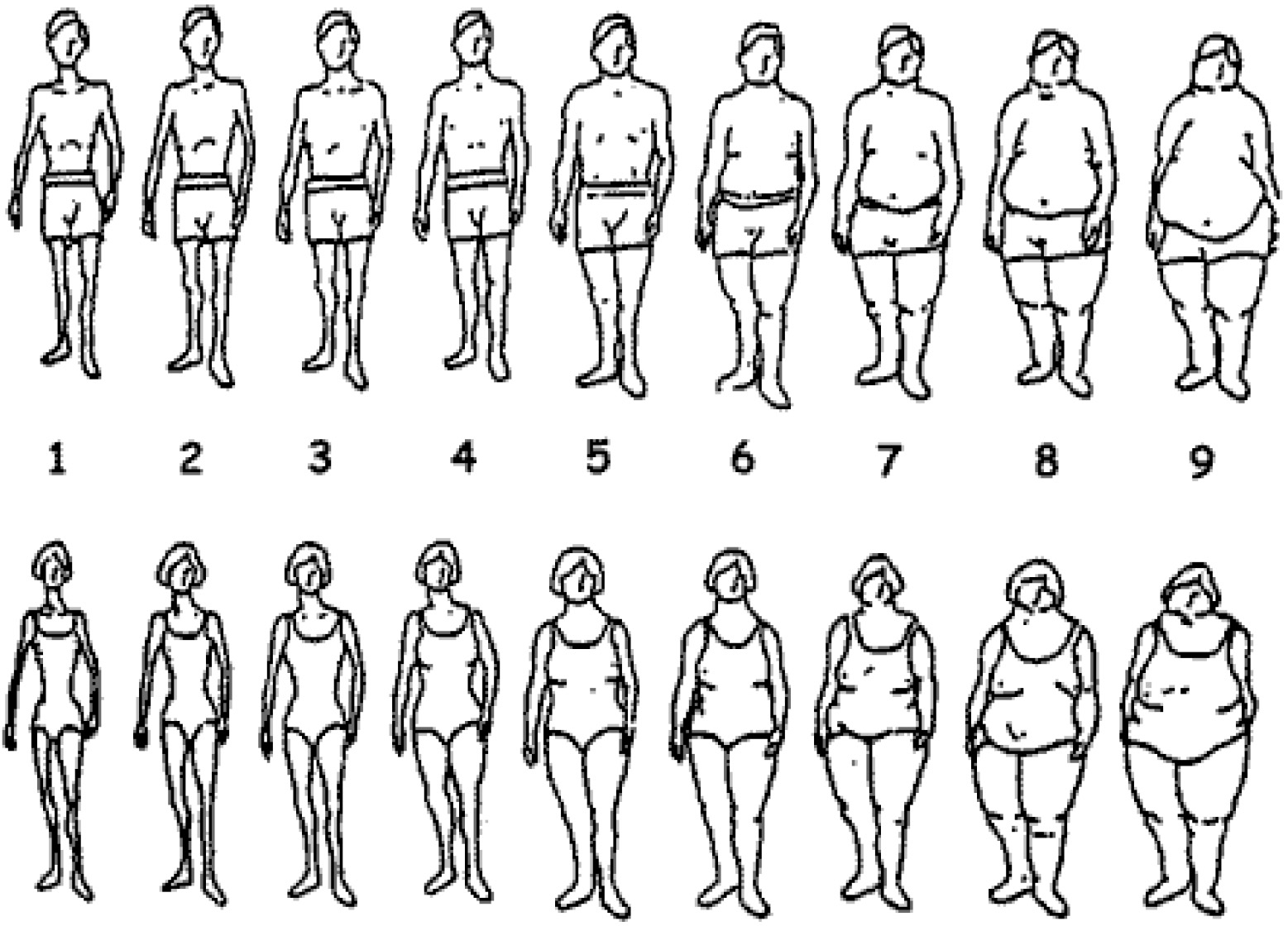 This study used the statistical programs SPSS 23.0 (IBM Corp., Chicago, IL, USA) and AMOS 23.0 (IBM Corp., Chicago, IL, USA) for analysis. Confirmatory factor and reliability analyses of the research tool were also conducted (Table 2). In addition, a normality test and correlation analysis between variables were conducted to examine the relationship between variables and multicollinearity (Table 3). The research problems were investigated using a structural equation model, and moderating effect analysis was performed to verify the differences between groups. This study conducted all empirical analyses at a significance level of = 0.05.

Ethical approval was obtained from the Institutional Review Board (IRB) of Gachon University through a preliminary review, in accordance with the Bioethics and Safety Act, in February 2022. Subsequently, an online survey was conducted by applying a convenience sampling (non-probability) method for approximately three months. This study used the Google platform to create online questionnaires and inform research participants about the purpose of this study and the instructions on the information to be collected. After voluntarily agreeing to participate in this study, research participants completed self-administered questionnaires. The data of 451 questionnaires were obtained through the survey process.

In addition, this study examined the analytical values of descriptive statistics to verify whether there was a multivariate normal distribution (Table 3). It was found that skewness was between –1.26 and 1.44 and that kurtosis was between –1.16 and 2.45. Thus, the analysis results satisfied standards for skewness of 2 and kurtosis of 7, as proposed by West, Finch, and Curran [34]. Furthermore, a correlation analysis was performed to examine the fundamental relationship between the variables used in this study. Table 3 shows the analysis results. It was found that all the values of the correlation coefficients were lower than 0.80, the reference value proposed by Kline [35]. The calculation results verified the appropriateness of multicollinearity among the variables.

3.2 Effect of Self-Determined Motivation on Exercise Adherence Intention
3.2.1 Verification of Goodness of Fit of the Structural Model

3.2.2 Verification Based on the Structural Model

Table 4.Verification of research problem 1 based on the structural model. 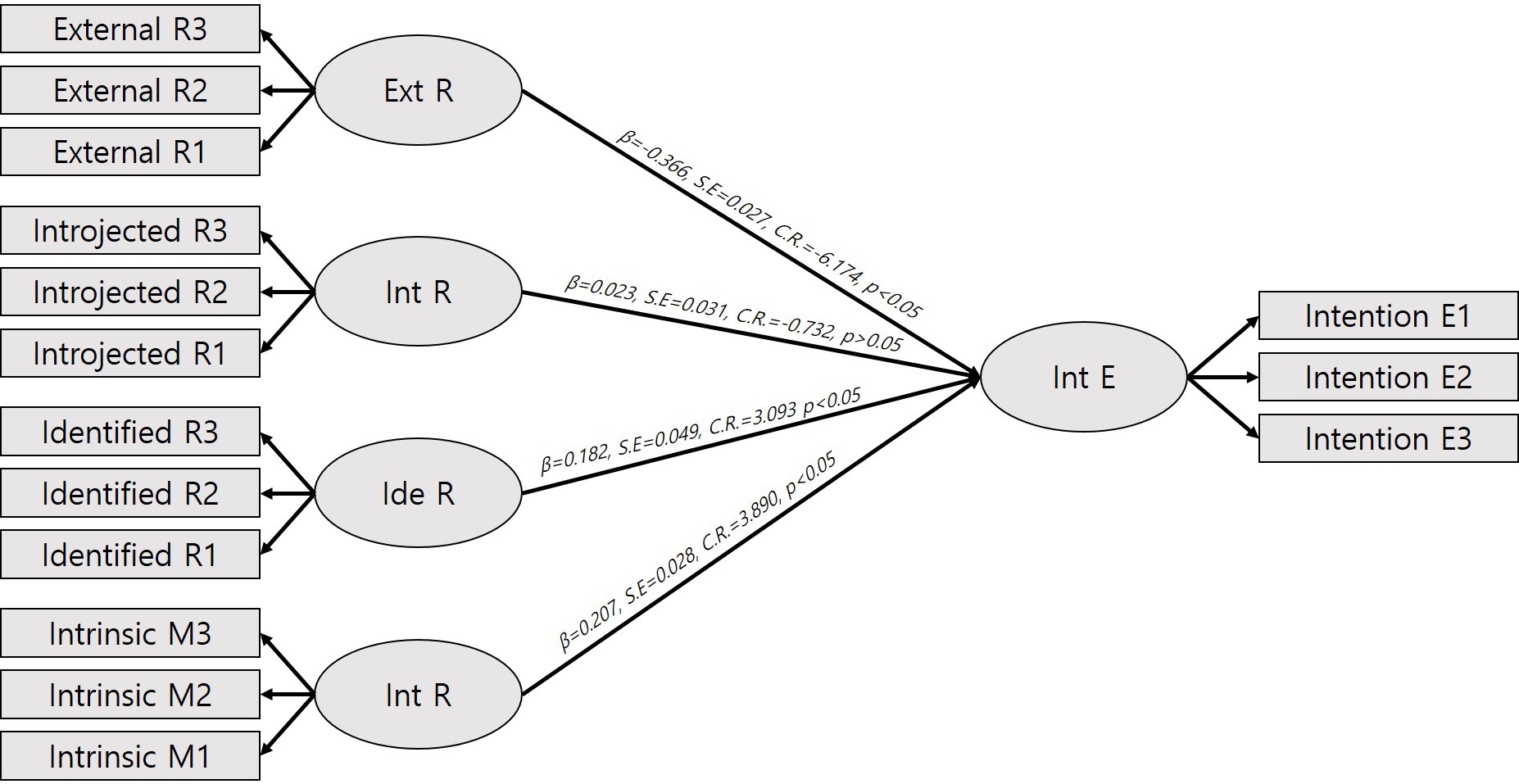 Result of the structural model.

3.3 Effect of Self-Determined Motivation on Exercise Adherence Intention Varies according to Gender and the Difference between Perceived and Ideal Body Images

This study divided research participants into a group of those generally satisfied with their body image (self-discrepancy 1) and a group of those generally dissatisfied with their body image (self-discrepancy 1) to verify the research problem of this study. Subsequently, as both groups were divided according to gender, the following groups were finally formed: satisfied men (n = 117), dissatisfied men (n = 106), satisfied women (n = 110), and dissatisfied women (n = 115). This study conducted a multigroup structural equation modeling (SEM) analysis based on the four groups to analyze the differences in path coefficients.

Table 5.Comparison of goodness of fit between the model applying equivalence and constraint between groups and the baseline model.

Table 6.Goodness of fit of the (baseline) model applying a constraint on measurement invariance and parameter estimates according to groups.
4. Discussion

Therefore, this study analyzed the effect of self-determined motivation on exercise adherence intention according to satisfaction with the body image. Its significance lies in the fact that it focuses on Generation Z, who have recently gained considerable attention from various industries as they are the future leading consumers. Even so, this study has the following limitations. First, it calculated Generation Z’s satisfaction with their body image using the FRS, which shows a series of consecutive body images that increase in size. As people can exercise not only to change their body image but also to enhance their health, further research should be conducted from various perspectives. In addition, this study identified participants’ self-determined motivation for exercise based on a survey. In this regard, further experimental research should be conducted to verify the difference in exercise participation according to satisfaction with the body image and the degree of change in self-determined motivation according to exercise progress. Last, Generation Z, which was selected as the subject of this study, includes a period of 20 years. Given the fact that differences between generations Z could occur, research should be conducted on a wider range of ages in the future. In addition to age, it is also necessary to consider the need to conduct research by applying additional factors such as frequency of social media use.

IL and CC set the research topic and design. All authors implemented the data collection and analysis. IL and CC completed the first draft of this study. CB reviewed the manuscript. All authors contributed to editorial changes for the revision process and approved the submitted manuscript.

The authors express their sincere gratitude to all participants in this study.