Cisplatin is one of several platinum-based anticancer agents and is used for the treatment of many types of tumors, including solid tumors, ovarian, breast, brain, kidney, testicular, and head and neck tumors, as well as leukemia [1]. However, cisplatin has severe side effects on male fertility, which can remarkably affect patients’ quality of life [2]. Infertility induced by cisplatin is believed to be associated with the overproduction of reactive oxygen species (ROS) and increased levels of hydroxyl radicals (OH), hydrogen peroxide (HO), and superoxide anions (O), which in turn can cause oxidative damage (both in vitro and in vivo) [2]. This oxidative damage is the result of free radical-mediated chain reactions that leads to the oxidation of nucleic acids, such as DNA and RNA, lipid peroxidation, and protein oxidation [2]. Cells maintain a normal level of free radicals for cellular processes through endogenous enzymatic and non-enzymatic antioxidants. If the balance between the generation and degradation of free radicals is upset, a situation known as oxidative stress, damage to the cells can occur [3].

Sperm are known to possess a high content of polyunsaturated fatty acids, plasmalogens, and sphingomyelins, making sperm sensitive to oxidative stress [4]. Besides, lipids in sperm are easily oxidized, which can cause severe damage to the sperm [5]. Cisplatin can also induce a mitochondrial-dependent radical response, which can damage nuclear DNA, enhancing the cytotoxic effect. The dysfunction of mitochondria induced by cisplatin varies among cells, depending on the mitochondrial redox status, mitochondrial DNA integrity, as well as bioenergetic function of the cells [6]. Mature human sperm have 22–28 mitochondria helically arranged around the axoneme of the sperm, which generate ROS and ATP to maintain sperm motility. These mitochondria are potential targets of cisplatin [7, 8]. Therefore, it is desirable to find an effective therapy to protect sperm against cisplatin.

Melatonin is mainly produced by the pineal gland and plays major role in stimulating antioxidant enzymes and scavenging free radicals [4, 9, 10]. In many cell types, the nuclear factor erythroid 2-related factor (Nrf2) functions as antioxidant factor through the regulation of downstream genes, especially heme oxygenase-1 (HO-1) [11]. It has been reported that melatonin can promote the activation of Nfr2 and the expression of the antioxidant enzyme HO-1 [12]. However, it remains unknown whether melatonin can protect sperm against cisplatin. Therefore, in the present study, we investigated the effects of melatonin on human sperm characteristics and biochemistry as related to oxidative stress and a mechanism for the prevention of damage caused by cisplatin.

Sixty-six ejaculated sperm samples with 15 10 spermatozoa mL, 32% progressive sperm, and 4% morphologically normal forms were obtained from healthy donors undergoing routine semen analysis in the Second Affiliated Hospital of Nanjing Medical University (Najing, China). Then, the sperm samples were pooled and divided equally into each group in the trials and each experiment was repeated three times. The study was approved by the Ethics Committee of the Second Affiliated Hospital of Nanjing Medical University and was performed in accordance with the ethical standards laid down in the 1964 Declaration of Helsinki and its later amendments. Donors were informed about the purpose of the study and their consent was obtained.

Stock solutions of cisplatin dissolved in physiological saline were stored at –20 C and diluted to 25 mol·L, 250 mol·L, 2.5 mmol·L, 25 mmol·L, and 50 mmol·L. As a control, sperm suspensions were diluted in physiological saline. Stock solutions of melatonin dissolved in dimethyl sulfoxide (DMSO) were stored at 4 C and diluted with sperm solutions to final concentrations of 5, 12.5, 50, 100, and 500 mmol·L (pH = 7.4). Sperm were collected by densitygradient preparation. Sperm suspensions were diluted with fresh human tubal fluid (HTF) (with 10% BSA) to yield an approximate concentration of 1 10 sperm mL. The samples were centrifuged, and motile sperm were resuspended in HTF containing cisplatin or melatonin at different concentrations. The sperm suspensions were incubated for 3 h at 37 C in a humidified atmosphere according to the protocol as described in a previous report [13].

Sperm motility was analyzed using computer assisted sperm analysis (CASA) as described previously [14]. An aliquot of 10 L of each sample was transferred to a Maker chamber that had been prewarmed to 37 C. The motility of 200 spermatozoa was evaluated by CASA.

The fluorescent, lipophilic and cationic probe, JC-1, was used to measure the m value of human sperm according to the manufacturer’s directions. Briefly, after the indicated treatments, the sperm samples were incubated with JC-1 staining solution (5 g·mL) for 20 min at 37 C. The sperm samples were then rinsed twice with washing buffer and the fluorescence intensity of both mitochondrial JC-1 monomers (520 nm) and aggregates (590 nm) were detected using cytometry (BD Biosciences, San Diego, CA, USA). The samples were shielded from light during the incubation with the JC-I staining solution.

ATP levels were measured using an ATP assay kit (Beyotime Institute of Biotechnology, Shanghai, China) according to the manufacturer’s instructions. Briefly, 1 10 sperms were lysed using ATP lysis buffer on ice. Samples were collected and centrifuged at 12,000 rpm for 10 min at 4 C to acquire the supernatants for further analysis. Samples and ATP detection working dilution were added and the luminescence activity was measured immediately using a luminometer (Bio Tek, Winooski, VT, USA).

Each sample was mixed with 20% trichloroacetic acid and 0.67% thiobarbituric acid, and the mixture was incubated at 100 C for 15 min. The precipitate that resulted upon cooling was removed by centrifugation (1600 g, 15 min). The fluorescence in the organic phase was measured at 532 nm using a fluorescence spectrophotometer, and the results were expressed as mol MDA per mg protein.

Proteins were extracted from the human sperms. The expression of Nrf2 and HO-1 was examined by western blot. -Actin was used as the internal loading control of protein. The protein samples were separated by electrophoresis on SDS/PAGE and transferred to PVDF membranes (Millipore, Marlborough, MA, USA). Each membrane was blocked with 5% nonfat milk and incubated overnight at 4 C with the appropriate primary antibodies (anti-Nrf2, anti-HO-1, anti--Actin) followed by incubation with suitable secondary antibodies for 2 h at room temperature. The signals from the detected proteins were visualized.

Statistical analysis was performed using SPSS 19.0 statistical software (IBM Corp., Chicago, IL, USA). All values are presented as the mean SD. Statistical analyses were performed by ANOVA, followed by LSD multiple comparisons where appropriate. Variables were checked for normal distribution, and comparisons between the different concentrations and controls were carried out by paired t-tests.

Different concentrations of cisplatin (25 , 250 M, 2.5 mM, 25 mM, and 50 mM) were incubated with human sperm for 3 h (Fig. 1a). Both the total and progressive motility of sperm treated with cisplatin were reduced in a dose-dependent manner (p 0.05) compared with the control group. Treatment with 250 M cisplatin reduced the total motility by 50% compared with the control (Fig. 1a). Then, a working concentration of 250 M cisplatin was selected, on the basis of a previous report [15], for use in combination with human sperm and different concentrations of melatonin. Our experimental results showed that only 100 mM melatonin could restore cisplatin-induced sperm dysfunction, and 5, 12.5, and 50 mM melatonin could not recover either total motility or progressive motility (Fig. 1b,c). Also, incubation with 500 mM melatonin inhibited sperm motility (Fig. 1b,c). 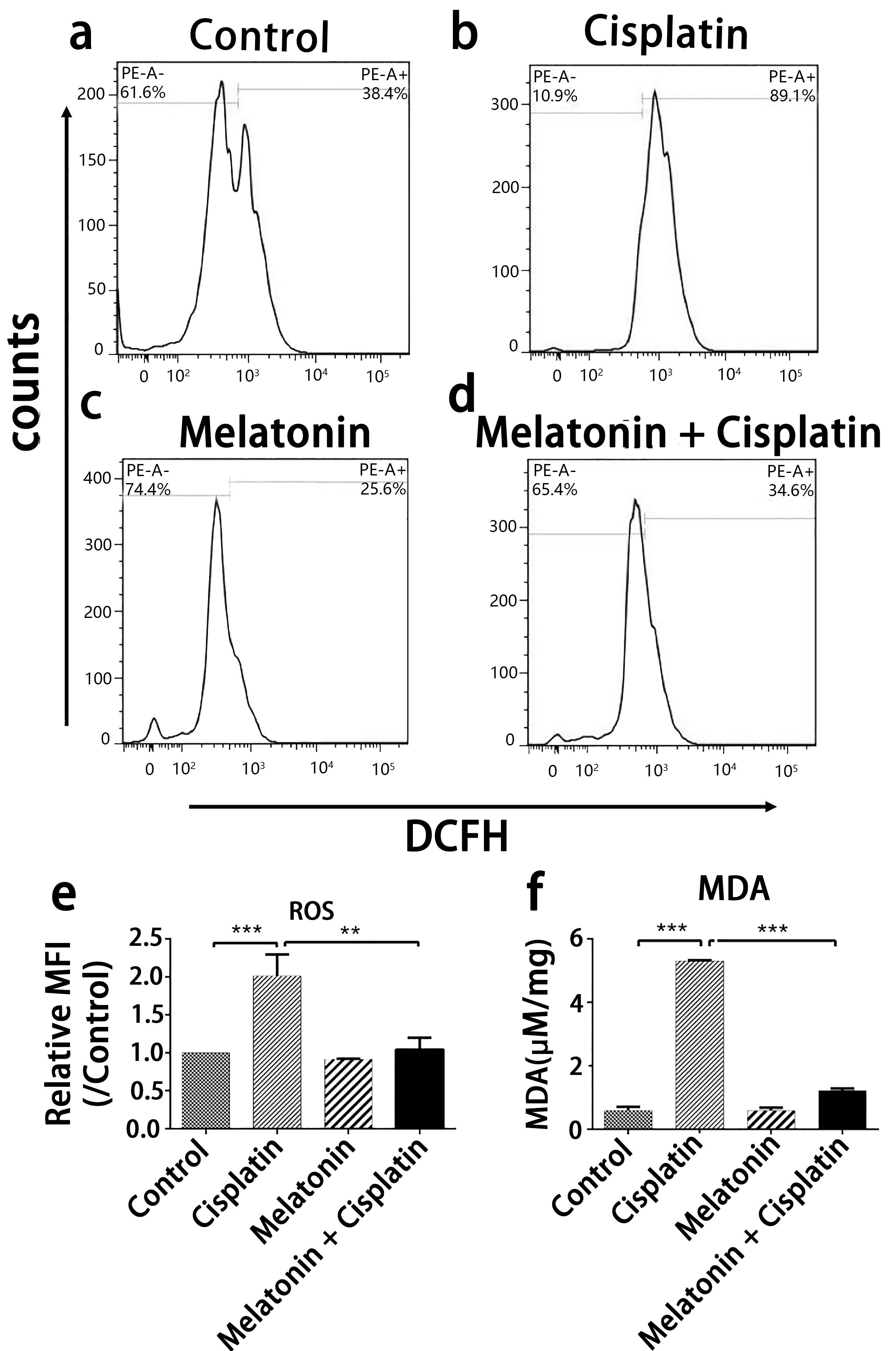 Our results showed that cisplatin exposure repressed the expression of the antioxidant pathway components Nrf2 and HO-1. Treatment with melatonin activated the Nrf2 and HO-1 expression reduced by cisplatin (Fig. 5a,b). Melatonin improved antioxidant gene expression decreased by cisplatin. (a) Nrf2 and HO-1 protein levels were analyzed by western blotting. (b) Each data point was calculated from three triplicate groups and the data are presented as the mean SD. *p 0.05 compared with the control.

Cisplatin is an effective anticancer drug, but it has demonstrated toxicity to the bladder [15], inner ear [16], peripheral nerves [17], and reproductive system [15]. Melatonin is capable of attenuating testis toxicity induced by microwave radiation [18], 2-bromopropane [19], and busulfan [20]; thus, melatonin may be useful in preventing the effect of cisplatin-induced toxicity on fertility. Although cisplatin has been shown to induce damage in the early stage of spermatogenesis in human and animal models [21, 22], considering the difficulty of the application of melatonin in humans, we used ejaculated human sperm as our model to examine the effect of melatonin on fertility.

In our study, we demonstrated that cisplatin can adversely affect the motility of human sperm, which was consistent with previous reports [8]. Furthermore, we showed that a low dose of melatonin markedly alleviated the observed decrease in the motility of human sperm caused by cisplatin. However, when the melatonin dose exceeded 100 mM, melatonin itself inhibited human sperm motility. The reasons for this effect remain unknown. Considering the existence of the blood-testis barrier and the severe toxicity of potent metabolites formed from cisplatin, 100 nM melatonin could be viewed as a reference for clinical treatment.

Mitochondria, which are arranged around the mid-piece axoneme of human sperm, are the primary targets of drugs and the cause of human sperm death. The motility of human sperm is mainly maintained by mitochondria, which have important role in the generation of ATP as the molecular motor generating power for sperm flagellar movement. To further understand the cause of reduced human sperm motility, we examined the m values of sperm and found that the m value was decreased in the cisplatin group compared with that in the control group. Melatonin ameliorated the observed reduction in the m values of human sperm caused by cisplatin. Therefore, the ability of melatonin to rescue the m might explain why melatonin was able to decrease the apoptosis in sperms induced by cisplatin.

The disruption of the m might be attributed to the generation of excess ROS by human sperm mitochondria [23, 24]. ROS include superoxide anions (O), hydrogen peroxide (HO), and hydroxyl radicals (OH), which are involved in many clinical disorders, including infertility [25]. Under physiological conditions, a balance exists between ROS and antioxidants in sperms. At the proper concentrations, ROS are very important for sperm motility [26]. A previous study has reported that O triggered both hyperactivation and capacitation, while superoxide dismutase, an enzyme that catalyzes the dismutation of O into oxygen and HO, blocked these activities [27]. We showed that melatonin could reduce the levels of cisplatin-induced ROS in sperm, suggesting that melatonin might improve mitochondrial function by reducing ROS generation. These results are consistent with a previous report that melatonin could stimulate the effect of indole on ATP production at the mitochondrial level in rats [4]. In addition to mitochondria, lipid membranes are also considered to be targets of ROS. Sperm membranes possess many polyunsaturated lipids, which are sensitive to ROS and oxidative damage, leading to fast intracellular ATP loss. The results of the present study suggested that melatonin might function as an antioxidant to rescue sperm motility by reducing ROS generation.

MDA is a major product of the lipid peroxidation of membrane polyunsaturated fatty acids. In the present study, cisplatin increased the MDA levels in human sperm compared with the control group, while these cisplatin-induced MDA increases were reduced by melatonin, further indicating that melatonin may be able to protect sperm from the effects of cisplatin.

In addition, we showed that melatonin upregulated the levels of the antioxidant factor Nrf2 and HO-1, indicating that melatonin might protect human sperm through activating Nrf2 and its downstream gene HO-1.

This study was performed in accordance with the ethical standards laid down in the 1964 Declaration of Helsinki and its later amendments. Donors were informed about the purpose of the study and their consent was obtained. The study was approved by the Ethics Committee of the Second Affiliated Hospital of Nanjing Medical University ([2019] KY 041).

We thank Liwen Bianji, Edanz Group (www.liwenbianji.cn/ac), for editing the English text of a draft of this manuscript.

This research was funded by the National Natural Science Foundation of China (No. 81400758) and Science and technology development fund of Nanjing Medical University (NMUB2019048) for supporting our work.