Cystoscopy is a common office-based examination in many urology clinics. This procedure is indicated for common conditions such as hematuria, suspected bladder tumors, recurrent urinary tract infections, and lower urinary tract symptoms [1, 2]. However, a majority of patients are afraid of the procedure because they believe it will be painful [2]. In 1973, Tsuchida Seigi and Sugawara Hiroatsu first introduced flexible cystoscopy (FC), as a potentially more comfortable alternative to rigid cystoscopy (RC) [3]. Subsequently, FC has been routinely performed in many outpatient urology departments, and several studies indicate that FC is more tolerable than RC [4, 5]. The European Association of Urology (EAU) guidelines state that FC increases compliance relative to RC for instillation in the urethra under topical anesthetics, especially in male patients due to prostate, tight sphincter, and longer urethra [6]. Even so, it can be difficult to optimally relieve pain and anxiety during FC. 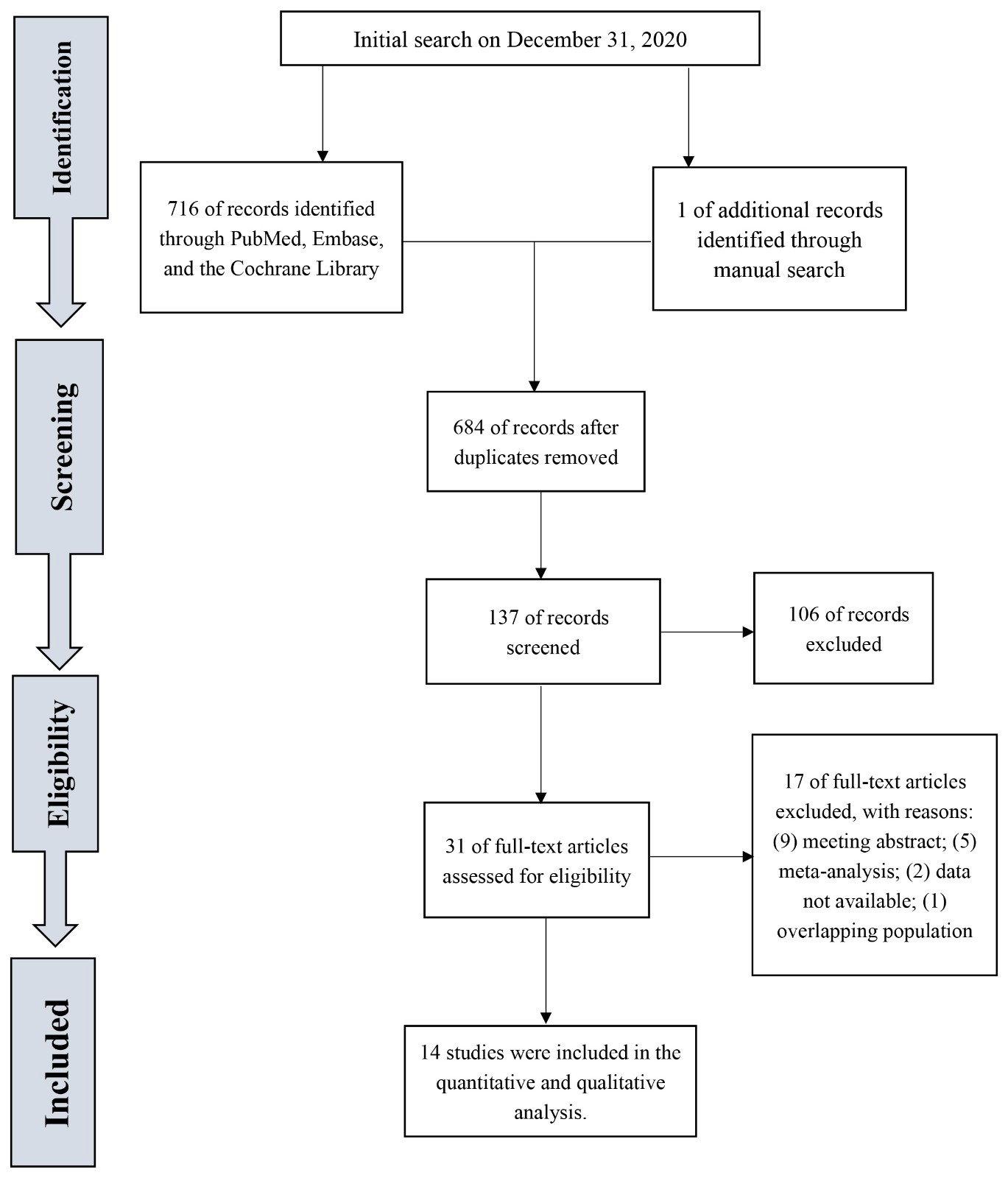 Continuous variables are presented as means standard deviation (SD). The median and range were also converted to the mean and SD [27]. The percentiles were transformed to SD using the relevant formula [28]. Continuous variables were calculated using the weighted mean difference (WMD) or standard mean difference (SMD). When there was heterogeneity (I 50%, p 0.1), a random effect model was used. Otherwise, we used a fixed effect model. Statistical significance was considered as p 0.05. The meta-analysis was completed using STATA 14.2 (StataCorp, College Station, TX, USA).

Overall, 717 records were initially identified, and fourteen RCTs [13, 14, 15, 16, 17, 18, 19, 20, 21, 22, 23, 24, 25, 26] were included in the final analysis. Our study enrolled 1684 male patients who were from the United Kingdom, China, Canada, New Zealand, Spain, USA, Netherlands, Turkey, or South Korea. All flexible cystoscopies included in this study were performed under local anesthesia. Table 1 summarizes the main features of the studies that were included in this meta-analysis.

Table 1.The baseline characteristics of studies included in this study.
3.2 Pressure makes pleasure

Irrigation pressure can be increased by squeezing the irrigation bag or by increasing the height of the irrigation bag during flexible cystoscopy. A pooled analysis of three studies [13, 14, 15] including a total of 453 male patients demonstrated that patients in the higher irrigation pressure group had significantly lower VAS scores than their counterparts during FC (WMD: −1.43; 95% confidence interval (CI): −1.72 to −1.14; Fig. 3) with no between-study heterogeneity (p = 0.661). 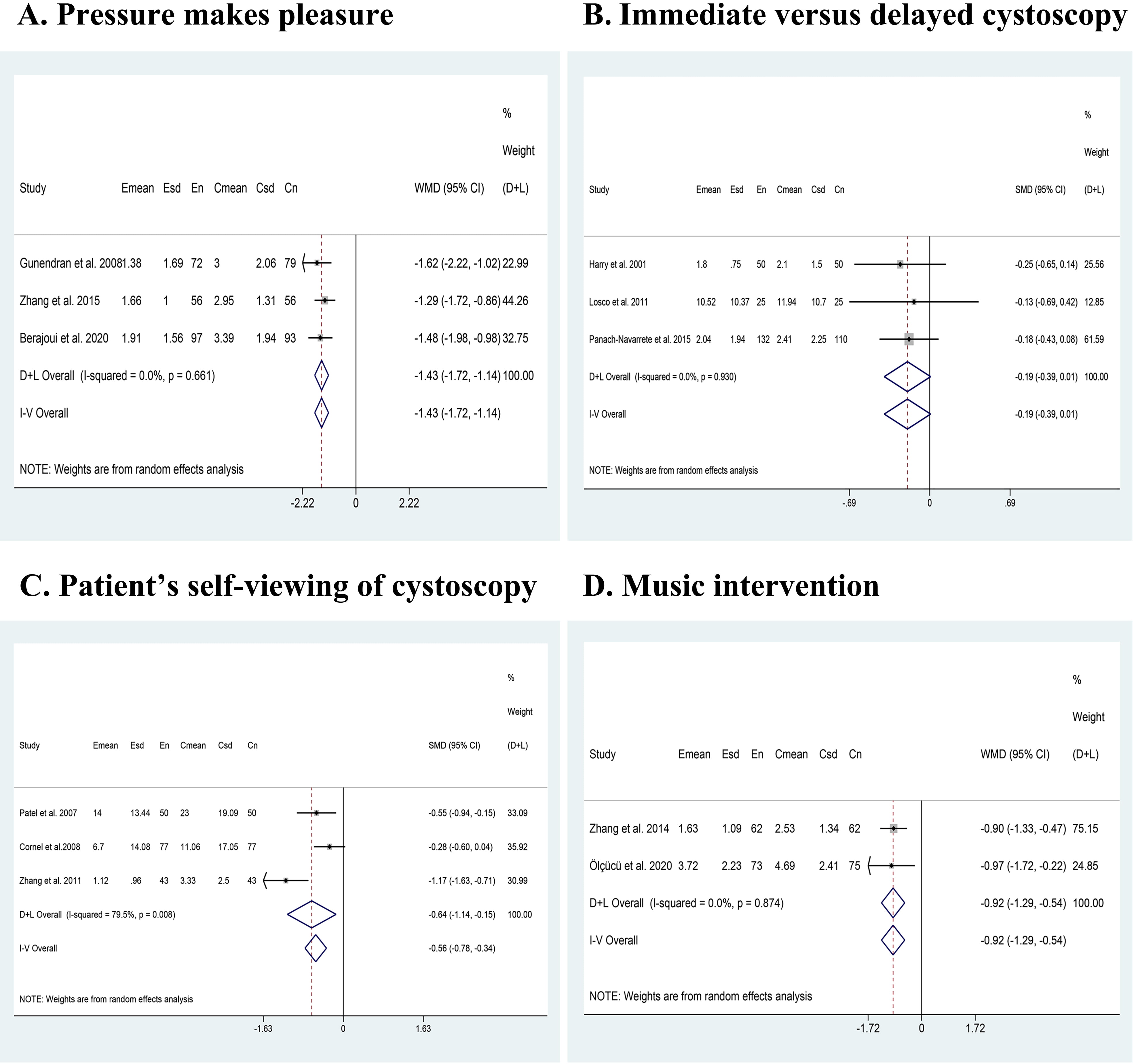 The effect of the time interval between application of local anesthetics and FC insertion on patient discomfort remains controversial. Three trials [16, 17, 18] containing a total of 392 male patients evaluated the pain with immediate versus delayed FC after the administration of local anesthetics. The results of the meta-analysis showed that there was no significant difference in pain perception between the immediate or delayed insertion groups treated with the same local anesthetic (SMD: −0.19; 95% CI: −0.39 to 0.01; Fig. 3).

Flexible cystoscopy has well established advantages, and, thus, it is a common outpatient procedure in urology practice [3, 4, 5, 6]. Most studies regarding pain relief during the FC procedure have focused on the instillation of local anesthetics, and previous meta-analyses concluded that intraurethral lidocaine instillation is associated with significantly improved patient pain during FC [7, 8, 9]. Other pharmacologic interventions included use of intrarectal diclofenac suppositories [29] and nitrous oxide inhalation [30]. Male patients frequently suffer more discomfort during FC than females because of anatomical differences between males and females [22, 23, 31]. To date, investigators have conducted many trials to identify potential adjuvant therapies to alleviate pain associated with FC, especially for male patients. The nonpharmacological methods investigated include: increasing irrigation pressure [13, 14, 15], delaying the instillation time of topical anesthetics in the urethra [16, 17, 18], allowing patients to watch the procedure process [19, 20, 21], listening to music [22, 23], hand-holding [24], urinating during FC [25], and virtual reality distraction [26]. All of these interventions are practical, inexpensive, and harmless.

The friction between the cystoscope and the urethral mucosa leads to bleeding and causes pain. Several studies found that the membranous urethra of the external sphincter is the most painful anatomical region during FC [22, 32]. Higher irrigation pressures might dilate the FC pathway, improving endoscopic vision and facilitating movement through the urethra. The present study showed that increased irrigation pressure reduced pain during FC. In contrast, delayed cystoscopy after administration of anesthetics had no effect on patient pain. Insufficient volume and action time might contribute to this result. Holmes et al. [33] demonstrated a significant reduction in pain during FC in patients administrated 20 mL of gel containing lidocaine. In addition, distraction methods were associated with reduced pain during FC. Our study indicated that patient observation of the procedure on the video monitor with the urologist was associated with lower pain ratings. Similarly, listening to music improved pain in men undergoing FC. Other interventions, such as hand-holding or urination, had promising effects on pain reduction during FC. Gooran et al. [34] also found that the combination of intraurethral lidocaine gel and lidocaine injection into the glans penis significantly reduced pain during cystoscopy.

There are some limitations in the present study. First, the limited number of studies, the sample sizes, study population, surgeon’s experience, and the definition of outcome measures make it difficult to draw definitive conclusions. In addition, ethnic differences in penis size and FC diameters might affect the results. Second, the surgeons were not blinded during the procedure, so it is possible that the FC procedure might have been performed with greater care in patients in the intervention group compared with those in the control group. Finally, VAS scores are patients’ self-reported perceptions of pain, which are partly subjective. Objective parameters related to pain remain to be developed.

We observed that increased irrigation pressure, real-time visualization of the procedure, and music therapy alleviated pain in male patients undergoing FC. Well-designed trials are needed to confirm these promising, but preliminary, findings.

The authors are accountable for all aspects of the work in ensuring that questions related to the accuracy or integrity of any part of the work are appropriately investigated and re-solved.

This work was supported by Department of Science and Technology of Sichuan Province (2020YFH0099). The funders had no role in study design, data collection or analysis, preparation of the manuscript, or the decision to publish.