Uric acid (UA) is mainly formed in the liver and intestine and is the end product of purine metabolism [8]. Hyperuricemia, defined as a serum UA concentration of 7.0 mg/dL in men and 6.0 mg/dL in women [9], is an independent risk factor for cardiovascular disease and is associated with diabetes, metabolic syndrome, hypertension, and chronic kidney disease in high-risk populations [10, 11, 12]. Additionally, some studies have demonstrated a relationship between carotid–femoral pulse wave velocity (PWV) and the development or progression of arterial stiffness and changes in the structural properties of the large artery wall in subjects with hyperuricemia [13, 14, 15].

To our best knowledge, there are no prior studies on the relationship between hyperuricemia and PP by gender in the non-diabetic Korean population. Therefore, we investigated this relationship using data from the seventh Korean National Health and Nutrition Examination Survey (KNHANES VII-2, 2017), a representative cross-sectional survey of the Korean population.

This study was based on data from the KNHANES VII–2 (2017), which are the most recent data for blood pressure and UA. The KNHANES is a cross-sectional survey conducted nationwide by the Division of Korean National Health and Welfare. The KNHANES VII–2 (2017) was performed from January 2017 to December 2017. Participants provided written informed consent to participate in this survey, and we received the data in anonymized form. In the KNHANES VII-1, 8127 individuals over age 1 were sampled for the survey. Among them, of the 6458 subjects who participated in the KNHANES VII-2, we limited the analyses to adults aged 20 years. We excluded participants 821 subjects whose data were missing for important analytic variables, such as UA, SBP, DBP, and various blood chemistry tests. Thereafter, we excluded those individuals with missing values or who suffered from diabetes (this included 515 subjects diagnosed with type 1 or 2 diabetes mellitus or with fasting blood glucose level 126 mg/dL, or treatment for hyperglycemia). Finally, 5122 subjects (2251 men and 2871 women) were included in the statistical analysis (Fig. 1). This study was performed in accordance with the tenets of the Declaration of Helsinki. All survey participants agreed with the use of epidemiological research to identify risk factors and death causes of chronic diseases. Participants’ records and information in the KNHANES were anonymous and de-identified prior to analysis. Further information can be found in “The KNHANES VII-2 (2017) Sample”, which is available on the KNHANES website. The official website of KNHANES (http://knhanes.cdc.go.kr) is currently operating an English-language information homepage. The data of the respective year are available to everyone free of charge. If the applicant completes a simple subscription process and provides his/her email address on the official website of KNHANES, the data of the respective year can be downloaded free of charge. If additional information is required, the readers may contact the department responsible for the storage of data directly (Su Yeon Park, sun4070@korea.kr). As the data of KNHANES VII-2 are available to the public after removing personal identifiers and being anonymized, the Institutional Review Board (IRB) of Namseoul University determined that this study was exempt from requiring their approval (IRB No, 1041479-HR-201804-007). 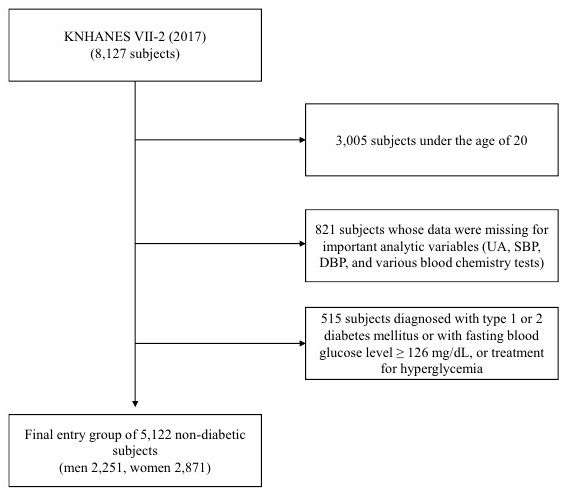 Hyperuricemia was classified as UA of over 7.0 mg/dL and 6.0 mg/dL for men and women [9]. SBP and DBP were measured by a nurse using a sphygmomanometer (Baumanometer, Wall Unit 33, USA) after the participants rested for over 20 minutes. SBP and DBP were measured twice on the right and left arm, and the average of the two values was calculated. PP was calculated as the difference between SBP and DBP. As a definitive cutoff value for high PP was not found in the literature, a high PP was classified when the PP was 60 mmHg [16].

The collected data were statistically analyzed using SPSS WIN version 18.0 (SPSS Inc., Chicago, IL, USA). The distributions of the participant characteristics were converted into percentages, and the successive data were presented as averages with standard deviations. The distribution and average difference in clinical characteristics according to normouricemia and hyperuricemia were calculated using a chi-square () and an independent t-test. In the case of logistic regression for odds ratio of hyperuricemia, the 4 models constructed were: (1) non-adjusted; (2) adjusted for smoking, drinking, and regular exercising or gender; (3) further adjusted for BMI, WC, TC, TGs, HDL-C, BUN, Crea, FBG, and hs CRP or gender; (4) further adjusted for age or gender. The significance level for all of the statistical data was set as p 0.05.

The present study investigated the association between hyperuricemia and PP by gender in non-diabetic Korean adults using data from the KNHANES VII-2 (2017). After adjustment for conventional risk factors, such as age, hyperuricemia was positively associated with PP in men but not in women.

UA, produced by the metabolism of purine nucleotides, tends to accumulate in the human body [17]. Hyperuricemia is a strong risk factor for atherosclerotic cardiovascular disease. Wu et al. [18] positively associated hyperuricemia with clustering of chronic vascular disease risk factors, such as obesity, dyslipidemia, and hypertension, in Chinese adults. In the Generation 3 Framingham Heart Study, serum UA was independently associated with carotid-femoral PWV and carotid-radial PWV, suggesting a role for UA in increasing arterial stiffness [19]. In other studies, hyperuricemia was found to be an independent predictor of hypertension [20], arteriosclerosis [21], and the development of LV hypertrophy [22].

Serum UA can cause arteriosclerosis and LV hypertrophy by directly stimulating the renin-angiotensin system, reducing endothelial nitric oxide bioavailability, and inducing oxidative stress due to the generation of oxidants or NADPH during UA production by xanthine oxidoreductase. In turn, activation of the vascular renin-angiotensin system can lead to irreversible vasoconstriction and remodeling of the intrarenal vasculature [23, 24]. Moreover, hyperuricemia can increase the endothelin-1 level and myocardial oxidative stress, inducing ventricular remodeling and LV hypertrophy [25]. Therefore, some studies argued that inhibitors of UA production, such as allopurinol, suppress LV hypertrophy and LV dysfunction [26, 27].

In the presented study, after adjusting for related variables (excluding age), hyperuricemia was not associated with high PP in men, women, and the overall population. However, after further adjusting for age, hyperuricemia was positively associated with PP in men and the overall population but not in women. Age is associated with hyperuricemia and sexual hormones in both men and women. In our results, age was higher in the hyperuricemia group than in the normouricemia group for women but lower for men. Kurahashi et al. [28] observed a dose-response association between the onset of hyperuricemia and testosterone dose received by females undergoing testosterone replacement therapy, and a positive correlation between serum UA and creatinine levels. The up-regulation of UA was attributed, at least in part, to the rapid increase in purine production associated with the increase in muscle mass. Hak et al. [29] explained the increase in serum UA in women from the United States (US) by menopause and other age-related factors. Estrogen and progestogen therapy in postmenopausal women can dramatically lower serum UA levels [30]. Mumford et al. [31] revealed an inverse association between UA level and estrogen and progesterone in US women.

The association between UA and atherosclerosis and LV hypertrophy in men and women can differ by country, race, and other potential confounding factors, such as obesity, hypertension, chronic kidney disease, and diabetes mellitus. According to Zangana, high UA level is positively linked to both LV mass and abnormal LV geometry among hypertensive adults in Iraq; and this effect is greater in men than in women [32]. In another study, an elevated serum UA level was positively associated with higher cardio-ankle vascular index risk in Chinese women but not in men [33]. Matsumura et al. [34] described serum UA as an independent factor for LV hypertrophy in hypertensive Japanese women (p = 0.027) but not in men (p = 0.29). In contrast, the Baltimore Longitudinal Study of Aging disclosed a positive correlation between serum UA level and PWV in US men but not in women [35]. In Chinese adults who underwent health screening, Kuo et al. [36] associated hyperuricemia with co-existing arterial stiffness, measured by abnormal brachial-ankle PWV, in men (OR, 2.72; 95% CI, 1.53–4.85) but not in women (OR, 1.14; 95% CI, 0.89–1.47). In addition, Kurata et al. [37] found a positive correlation between LV (LV mass and wall thickness) and serum UA level in Japanese hypertensive men but not in women, suggesting a link between elevated UA level and concentric hypertrophy in men. In our study of non-diabetic Korean adults, the association between hyperuricemia and PP differed between the sexes. As far as we know, there are no prior studies of gender differences in the relationship between hyperuricemia and PP in non-diabetic populations. However, when evaluating the relationship between serum UA and PWV in healthy Brazilian adults, Baena et al. [38] described a positive association between serum UA and PWV in men (p = 0.01) but not in women (p = 0.10).

Currently, the exact reason for the gender difference in the association of UA with PP remains unclear. However, there are several potential explanations. First, despite smaller carotid arteries in women than men, women are much less likely to develop atherosclerosis than men. However, postmenopausal women, especially those with an autoimmune disease, are at an increased risk of developing atherosclerosis [39]. In this regard, Fairweather suggested that differences in sex hormones alter the immune response during atherosclerosis [40]. Cytokines, enzymes, and other mediators, such as mast cells and macrophages, produced due to elevated innate immune activation in men, allow remodeling of the blood vessel wall, a key process in the pathogenesis of atherosclerosis; in contrast, estrogen promotes more antibodies and auto-antibodies against oxidized low-density lipoprotein in the form of immune complexes, which coupled with the smaller size of vessels, leads to atherosclerosis in women [40]. In the National Heart, Lung, and Blood Institute Family Heart Study in the US, a positive interaction was reported between serum UA and carotid atherosclerotic plaques in men (p = 0.002) but not in women (p = 0.08) [41]. Second, PP, the difference between SBP and DBP, is a known predictor of arteriosclerosis and LV hypertrophy [42]. If SBP increases and DBP decreases, or SBP increases and DBP does not increase, then PP increases. An increase in SBP is associated with chronic LV overload, which enhances myocardial wall stress and oxygen demand [43]. Pérez-Lahiguera et al. [44] reported that both SBP (p = 0.001) and PP (p = 0.001) were positively associated with the LV mass index in Spanish adults, but DBP (p = 0.070) was not significant. In the study by Lin et al. [45], hyperuricemia was an independent risk factor of increased SBP in Chinese men but not in women. In terms of arithmetic methods, PP increases when SBP increases and DBP decreases; SBP does not increase, and DBP decreases; and SBP increases and DBP does not increase. One reason for the increased PP in hyperuricemia is that hyperuricemia is associated with an increase in SBP in men and the overall population (without an increase in DBP, i.e., the third case scenario mentioned above) but not in women (Tables 3,4). In our study, SBP but not DBP was an independent risk factor for hyperuricemia in men; for this reason, PP was also an independent risk factor. In contrast, SBP, DBP, and, thereby PP, were not independent risk factors for hyperuricemia in women.

The present study investigated the association between UA and PP in a non-diabetic Korean population using data from the KNHANES VII-2. Hyperuricemia was positively associated with PP in men but not in women. Our results may provide fundamental data linking UA with arterial stiffness and cardiovascular disease.

HY and JML contributed to conception and design. CGK and CHP contributed to data acquisition, analysis and interpretation. HY and KSL were a major contributor in writing the manuscript. All authors read and approved the final manuscript.

Those data are public and available and thus there is no need of ethical approvals and consent to participate in this study.

Thanks to all the peer reviewers and their opinions and suggestions.