Kidney carcinoma is one of the three malignant tumors of the urinary system. It had a global incidence of approximately 431,000 new cases and was responsible for 179,000 related deaths in 2020 [1]. The incidence of kidney carcinoma is much higher in developed regions such as North America and Europe than in Asia and Africa [1, 2]. Renal cell carcinoma (RCC) is the most normal histological subtype of kidney carcinoma and represents approximately 90% of all cases. ccRCC is the most common RCC subtype and accounts for 75% of cases [3]. Although the large majority of early, localized RCC can be cured by surgical treatment, the 5-year overall survival rate for advanced and metastatic RCC (mRCC) is only 5–10% [4]. Molecular-targeted therapeutic drugs such as Vascular endothelial growth factor (VEGF)/Vascular Endothelial Growth Factor Receptor (VEGFR) inhibitors and immunotherapy agents such as PD-1 antibodies have markedly improved the clinical prognosis of mRCC patients [5, 6, 7, 8]. However, their long-term benefit for patient survival remains unsatisfactory [9, 10]. The complexity of tumor heterogeneity and the clonal evolution of tumors ultimately leads to clinical drug resistance [11]. Advanced or metastatic RCC therefore remains as one of the most treatment-resistant cancer types. In order to improve patient outcomes, there is an urgent need for well-defined diagnostic biomarkers that can be used for early detection, risk stratification, and to overcome drug resistance.

EF-hand (EFh) domain-containing proteins have been implicated in malignant progression [12]. Allograft inflammatory factor 1 (AIF1, also referred to as IBA1) contains Efh and plays a critical role in the initiation and progression of cancers [13, 14, 15, 16, 17, 18]. AIF1L (allograft inflammatory factor 1-like, also referred to as IBA2) is a homolog of AIF1 [19, 20] and has a similar overall structure and molecular function [20]. Nevertheless, the two proteins may have diverse functions, as suggested by the different expression patterns seen in different tissues [21]. AIF1 is preferentially expressed in the spleen, tonsil, lymph node, thymus, and lung [22, 23], whereas AIF1L is notably expressed in the kidney. A potential role for AIF1L in tumorigenesis of the kidney and the associated molecular mechanisms have yet to be described.

In the present study, AIF1L was found to be significantly downregulated in ccRCC. A total of 539 ccRCC tumors were clustered according to the median value of AIF1L expression value and separated into AIF1L-high and AIF1L-low expression group. Univariate and multivariate Cox regression analysis were then used to identify differentially expressed genes (DEGs) with prognostic value. A prognostic index model based on the expression levels of AIF1L, SERPINC1, and CES1 was then constructed to predict clinical outcome and to guide treatment.

Level three sequencing data and clinical follow-up data for 539 clear cell renal cell carcinoma (ccRCC) samples and 72 corresponding healthy kidney samples was extracted from the TCGA dataset. The Fragments Per Kilobase of exon model per Million mapped fragments (FPKM) expression profile was then converted to Transcripts Per Kilobase Million (TPM) based on the sum of expression of all genes in a sample being 100,000. The microarray gene expression profile and related clinical data for GSE40435 [24], containing 101 pairs of ccRCC and adjacent non-tumor renal tissue, was downloaded and used to validate the results of this study.

2.2 Correlation of AIF1L expression with malignancy, pathological stage, and prognosis

The students t-test was used to evaluate statistical differences in mRNA expression between ccRCC and normal tissues. Similarly, paired t-tests were applied between paired ccRCC and adjacent normal tissues. Differences in AIF1L expression between subgroups of various clinicopathological parameters were analyzed by the Kruskal-Wallis test. Survival curves for AIF1L-low and -high expression groups were plotted by Kaplan-Meier analysis and compared using log-rank tests.

To identify genes associated with AIF1L expression, DEGs between the AIF1L-high and AIF1L-low groups were selected by the “edgeR” package in R language [25]. The median value for AIF1L expression was used to generate the AIF1L-high and AIF1L-low groups. The fold-change and p values were calculated for each gene. Genes with a log2 fold-change 1 and a p-value 0.05 were selected as DEGs [26, 27]. Functional enrichment analysis including Gene Ontology (GO) and the Kyoto Encyclopedia of Genes and Genomes (KEGG) 29 was conducted for these DEGs. Pathways with a p-value 0.05 were regarded as statistically significant.

2.4 Construction of a prognostic index model 3.2 DEGs analysis between AIF1L-high and AIF1L-low groups in TCGA dataset

The data for 539 ccRCC samples and 72 corresponding healthy kidney samples was extracted from the TCGA dataset. The median value for AIF1L expression was used to obtain high- and low-expression AIF1L groups. In total, 766 DEGs were identified using “edgeR”, comprising 165 increased and 601 decreased DEGs in the AIF1L-high group (Fig. 2D). A heatmap was then plotted to reveal the top 50 increased expression and top 50 decreased expression genes (Fig. 2E). 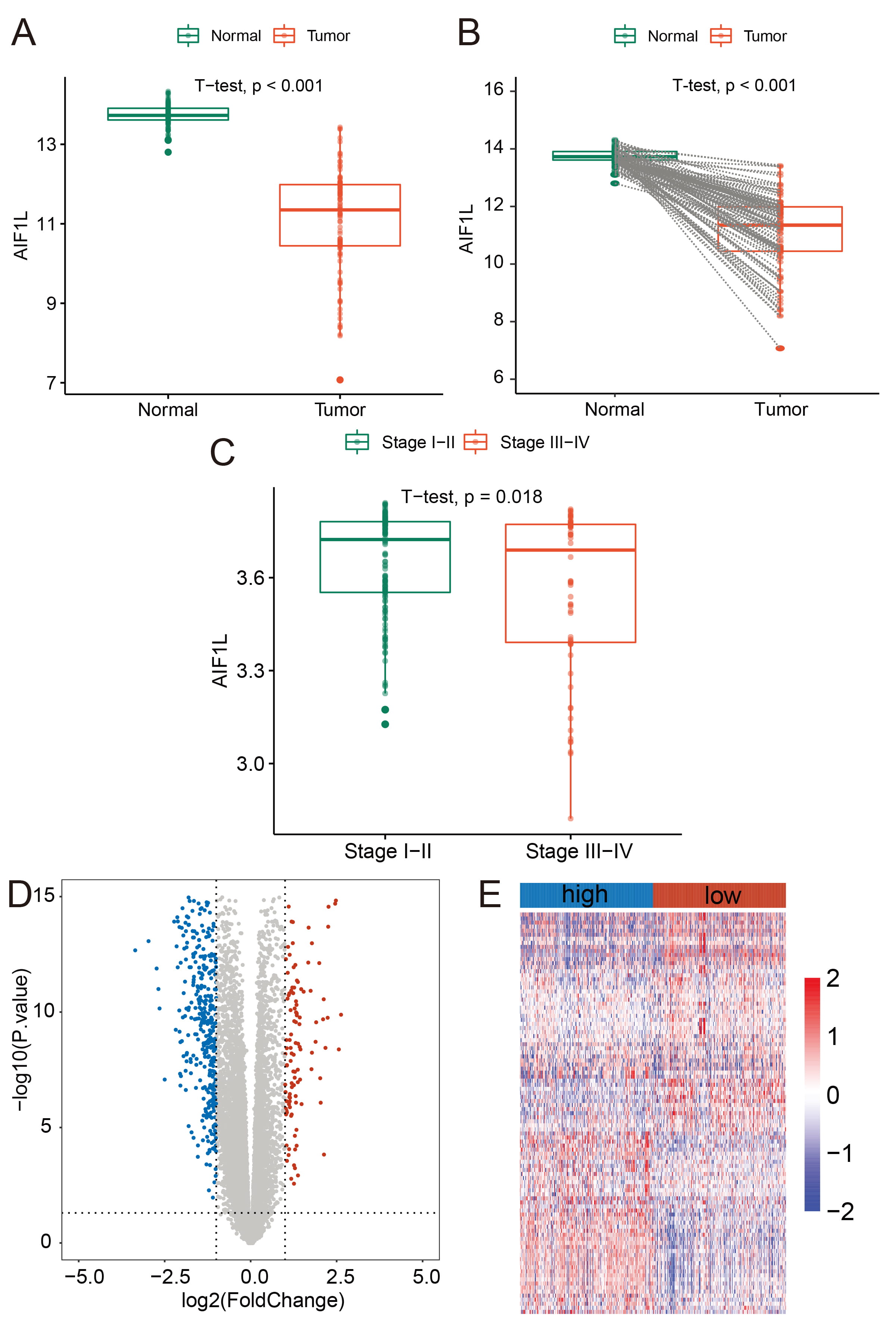 GO and KEGG enrichment analyses were conducted to identify involved pathways for the DEGs. Cellular Component (CC) enrichment analysis revealed the DEGs were mainly enriched in signaling pathways such as “collagen-containing-extracellular-matrix”, “blood-microparticle”, “endoplasmic-reticulum-lumen”, and “high-density-lipoprotein-particle” (Table 1). In Biological Process (BP), the DEGs were mainly involved in response pathways such as the “humoral-immune-response”, “antimicrobial-humoral-response”, “negative-regulation-of-peptidase”, “hormone-metabolic-process”, and “negative-regulation-of-endopeptidase-activity”. In Molecular Function (MF), the DEGs were mainly involved in inhibitor and binding activities such as “peptidase-inhibitor-activity”, “endopeptidase-inhibitor-activity”, “serine-type endopeptidase-inhibitor activity”, and “endopeptidase-regulator-activity”. KEGG pathway analysis of DEGs further revealed immune-related pathways and metabolism-related pathways such as “complement-and-coagulation-cascades”, “retinol-metabolism” and “metabolism-of-xenobiotics-by cytochrome-P450” signaling pathways (Table 2).

Univariate and multivariate Cox regression analysis was used to evaluate the prognostic significance of DEGs. Three genes (AIF1L, SERPINC1, and CES1) were selected by this analysis. The hazard ratio (HR) and 95% confidence interval (CI) for these were: AIF1L (HR = 0.83, 95% CI: 0.76–0.91), SERPINC1 (HR = 1.33, 95% CI: 1.12–1.58), and CES1 (HR = 0.87, 95% CI: 0.78–0.97). Kaplan-Meier survival analysis revealed that high SERPINC1 expression and low CES1 expression were associated with worse prognosis (Fig. 3A–B). Given their significant association with prognosis, AIF1L, SERPINC1 and CES were regarded as prognosis-related mRNA signatures in order to develop a prognostic index model. The prognostic index of each patient sample was calculated as follows: prognostic index = (–0.17) AIF1L + (0.28) SERPINC1 + (–0.13) CES1. The detailed prognostic index, survival status, and mRNA expression values for the three genes are shown in Fig. 3C–D. The performance of the prognostic index model for predicting the first-year survival rate of patients from the TCGA-ccRCC dataset was revealed by AUC analysis to be 0.671 (Fig. 3E). Kaplan-Meier survival analysis showed that patients with a high prognostic index had worse overall survival (Fig. 3F).

Metastasis is found in 25–30% of ccRCC patients at the initial diagnosis [29, 30]. Tumor metastasis results in death in 90% of cases and is thus associated with worse patient prognosis [31]. Cancer cells show an inherent ability to migrate, invade adjacent tissues and enter the vasculature, and thus to eventually metastasize. They crawl along extracellular matrix (ECM) fibers toward blood vessels in the primary tumor. By expanding their pseudopodia, the cancer cells generate a force that pulls the cell body forward and drives cell migration along the fibers at the migration front [32].

EF-hand (EFh) domain-containing proteins are associated with numerous disease states, including chronic inflammation and tumor progression [12]. The AIF1L protein structure encompasses two central EFh motifs that lack bound Ca [18]. AIF1L is expressed at high levels in kidney tissues. Previous research has suggested potential associations between AIF1L and podocytes. Other studies have revealed extensive accumulation of AIF1L within discrete filopodial protrusions [33]. It is well known that filopodia are associated with migration from the primary tumor, degradation of the basal layer, and intravascular infiltration [34]. AIF1L has been reported to inhibit the migration and invasion of breast cancer cells by regulating actin remodeling, with low expression of AIF1L being associated with poor prognosis [35]. We reached a similar conclusion in the present study of ccRCC samples. AIF1L expression was markedly decreased in ccRCC tissues compared to normal kidney samples. Moreover, the AIF1L expression level decreased as the tumor stage increased.

This study also identified two DEGs, SERPINC1 and CES1, that are related to AIF1L. Results from the TCGA/GEO dataset and validation of gene expression and survival differences confirmed the prognostic significance of SERPINC1 and CES1 in ccRCC. SERPINC1 (serpin peptidase inhibitor clade C member 1), also referred to as antithrombin III (ATIII) [36], regulates coagulation by inhibiting various factors and also has anti-inflammatory effects on epithelial cells [37]. Previous studies have reported that SERPINC1 expression is upregulated in nasopharyngeal carcinoma tissue [37], bladder cancer tissue [37], endometrial and exosome cancer tissue [38] compared to adjacent normal tissues. SERPINC1 expression was also strongly associated with the development occurrence and progression of certain tumor types [39, 40, 41] and has been identified as an immune-related gene. SERPINC1 expression is prognostic for the survival of lung adenocarcinoma41, uveal melanoma [40] and hepatocellular carcinoma [41] patients. CES1, also referred to as serine esterase 1, is protective against xenobiotics and is primarily expressed in the epithelia of metabolic organs including the liver, lungs and bladder [42, 43]. The restrain of CES1 in mononuclear cells display a diminished ability to lyse cancer cells [42]. Deficient CES1 enzyme activity was also frequently observed in non-Hodgkin lymphoma and B-cell chronic lymphocytic leukemia [42, 43], suggesting a possible cancer-cell-killing or cancer monitoring function for CES1.

To our knowledge, this is the first report of potential prognostic value for AIF1L, SERPINC1, and CES1 expression in ccRCC patients. The prognostic index model based on the three genes revealed a better performance than each gene alone. The performance of this model for the prediction of first-year survival in the TCGA dataset reached 0.671 using AUC analysis, indicating that it can predict the prognosis of ccRCC patients. One limitation of this study is that the model’s risk score was not compared with other clinical parameters (age, histological grade, and pathological stage) for the prediction of overall survival. Furthermore, this research was conducted using retrospective data available from public databases. Further verification will require prospective clinical trials.

AIF1L expression is markedly decreased in ccRCC tissues compared to normal kidney tissues. The expression level of AIF1L decreases with increasing tumor stage. A novel prognostic index model based on AIF1L, SERPINC1 and CES1 expression can predict the prognosis of ccRCC patients. This study provides additional insight into the potential role of AIF1L in the development and progression of ccRCC. Our proposed prognostic index model may help physicians in assessing the prognosis of ccRCC patients.

Availability of data and materials