The American Cancer Society estimates that in the U.S., about 248,530 men will be diagnosed with prostate cancer and approximately 34,130 men will die from the disease in 2021 [1], making it a leading cause of cancer morbidity and mortality [2]. Finasteride and dutasteride inhibit the enzyme 5-alpha-reductase (5-AR), which converts testosterone to dihydrotestosterone, the most potent intraprostatic androgen, thereby decreasing the size of the prostate gland. Both drugs are FDA approved for the treatment of benign prostatic hyperplasia (BPH) [3].

Two randomized, placebo-controlled chemoprevention trials of 5-ARIs, the PCPT (Prostate Cancer Prevention Trial) and REDUCE (Reduction by Dutasteride of Prostate Cancer Events), have been performed. These studies reported 24.8% and 22.8% decreases in the relative risk of prostate cancer, respectively [4, 5]. However, both drugs were also associated with a significant increase in the detection of high-grade prostate cancer, defined as Gleason score 7–10 in PCPT and 8–10 in REDUCE. Subsequently, in 2011 the FDA issued a black box warning for both drugs [6]. A black box warning, which is usually displayed in a rectangular black box on the medication label, is the strictest label change issued by the FDA [7, 8, 9].

Little is known, however, about the patterns of use for finasteride and dutasteride and the effect this warning had on their use after 2011. To date, we are only aware of one study that has reported on finasteride use patterns [10]; however, this study was based in Europe and only included data before the black box warning. The purpose of this analysis was to assess the use patterns of finasteride and dutasteride among participants by BPH status in the Prostate, Lung, Colorectal, and Ovarian (PLCO) Cancer Screening Trial before and after the 2011 black box warning. The PLCO was a randomized trial at 10 centers across the US that examined the effect of screening on cancer related mortalities. Data on prescription filling was available for this cohort through a linkage to Medicare Part D from 2008–2015; socio-demographic predictors of medication use were gathered from questionnaires.

The design of the PLCO trial has been described in detail elsewhere [11]. In short, the trial followed a randomized, two-arm design to examine the effectiveness of yearly screening on cancer-specific mortality. From 1993 to 2001, men and women were enrolled in the trial. Participants were recruited from 10 U.S. cancer screening centers. Eligible participants were 55 to 74 years; not previously diagnosed with breast, prostate, lung, colorectal or ovarian cancer; had no more than one PSA test in the 3 years before randomization (starting in 1995); and had not taken finasteride (Proscar) in the past 6 months before randomization. Men underwent yearly prostate-specific antigen (PSA) tests for 5 years and annual digital rectal exams (DREs) for the first 3 years. Participants were initially followed for up to 13 years or the end of 2009, whichever came first (questionnaires are described below). In 2011, PLCO switched to a centralized follow-up system, with participants re-consented to either active follow-up, passive follow-up or refusal of all further follow-up. Active and passive follow-up allowed for linkage with state cancer registries and the National Death Index, while only active follow-up allowed for the trial to re-contact participants for further questionnaires. Active follow-up participants were re-contacted in 2013 for another questionnaire, which also included a consent question for linkage to Medicare claims and Part D prescription drug files.

To be eligible for this analysis, men had to have reconsented to active follow-up, be alive in 2013 and consented to Medicare linkage at that time (Fig. 1). In addition, men had to have had at least 12 months of Medicare Part D coverage from 2008 to 2015 and had not been diagnosed with prostate cancer through the end of 2007 (Fig. 1). The original study was approved by all 10 participating centers’: University of Colorado Health Sciences Center, Lombardi Cancer Research Center of Georgetown University, Pacific Health Research Institute, Henry Ford Health System, University of Minnesota School of Public Health/Virginia L. Piper Cancer Institute, Washington University School of Medicine, University of Pittsburgh/Pittsburgh Cancer Institute/Magee-Women’s Hospital, University of Utah School of Medicine, Marshfield (Wisconsin) Medical Research and Education Foundation, and the University of Alabama at Birmingham institutional review boards and that of the National Cancer Institute [12]. No additional approval was needed for this current study as the data were publicly available.

The study flowchart depicts which men from the original Prostate, Lung, Colorectal, Ovarian Cancer Screening Trial were eligible for the current study.

With participants’ written consent, medication prescription data was obtained from the linkage of participants with Medicare Part D (prescription drug) from 2008 to 2015. From this linkage, medication use information such as drug name, number of days the medication was used, the number of prescriptions filled, and the supply quantity (days supply) was available and compiled for analysis. In addition, for those men with Medicare fee for service coverage, chronic condition flag variables (derived from algorithms that utilize procedure claims data) were available, including a variable for BPH. Men with the BPH chronic condition variable available were denoted as the chronic condition sub-cohort; for these men, BPH status could be assessed based not only on self-report.

Logistic regression (Proc logistic, version 9.4; SAS Institute Inc, Cary, NC, USA) was utilized to examine use of finasteride and dutasteride overall for the study period (2008 to 2015) while adjusting for covariates (e.g., study years, age, race/ethnicity and BPH status). BPH status was taken from the SQ if available, otherwise from the BQ. Both univariate and multivariable models were created with the outcome of any finasteride/dutasteride use. Within the chronic condition sub-cohort, a general estimating equation (GEE) model (Proc Genmod, version 9.4; SAS Institute Inc, Cary, NC, USA) was developed to examine annual trends in the use of finasteride, dutasteride over time with covariates of race/ethnicity, age and time-varying BPH status as assessed from the CMS chronic condition variables. Specifically, for a given year, if the chronic condition variable indicated the presence of BPH at that year or a prior year, then the subject was denoted as having BPH in that year. In addition, to assess the potential confounding effect of alpha blockers (tamsulosin, terazosin, doxazosin, alfuzosin and silodosin), we added alpha blocker use (as a time-varying variable) to the above GEE model to assess any changes in the odds ratios for finasteride and dutasteride use over time when additionally controlling for alpha blocker use.

3.2 Overall use of finasteride and dutasteride

Table 3.Prostate, Lung, Colorectal and Ovarian (PLCO) Cancer Screening Trial participants’ demographic characteristics and dutasteride use overall (2008–2015).
3.3 Trends of use of finasteride and dutasteride over time 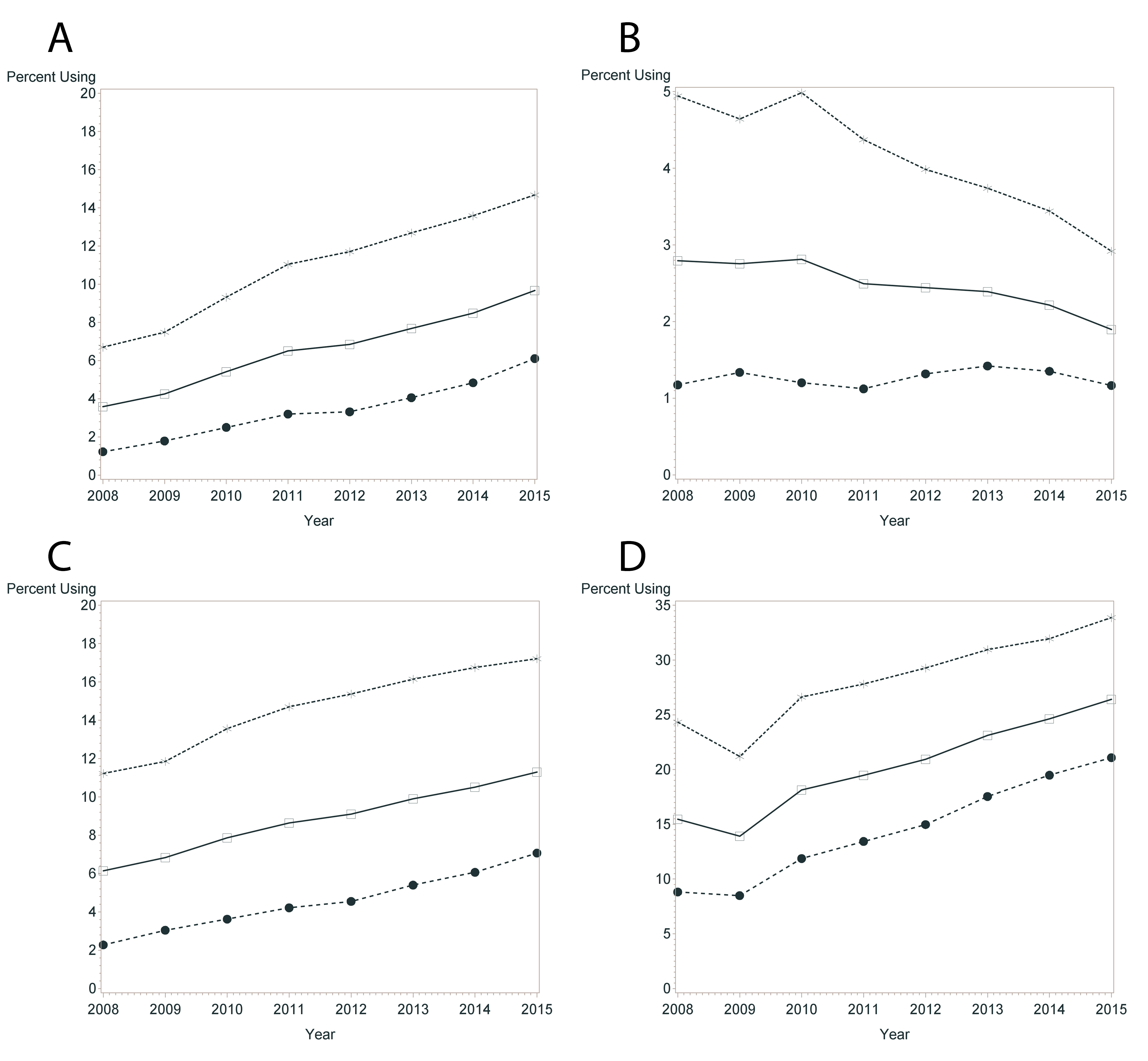 Fig. 2C shows trends in the use of either drug (finasteride or dutasteride) over time. The GEE model in the sub-cohort, controlling for yearly BPH status, gave an OR for use of either drug of 1.04 (95% CI: 1.01–1.06) per additional year. The OR was unchanged when use of alpha blockers was added to the model.

In this analysis of the PLCO cohort, finasteride and dutasteride use were generally low and were more prevalent among men with BPH and older men. In addition, when compared to non-Hispanic white men, Hispanic and Asian/Pacific Islanders were more likely to use either drug.

Despite the black box warning, finasteride use continued to increase after the warning, among all men and, in particular, among men diagnosed with BPH. Considering that finasteride is used to treat BPH [13, 14, 15], its greater use among men diagnosed with BPH is not surprising. This current analysis showed that there was an increase in the incidence of BPH over time; however, even after controlling for BPH status, we observed a statistically significant increase in finasteride use over time. Thus, the higher incidence of BPH over time alone does not explain higher use of finasteride over the study period.

The literature indicates that there is a positive correlation between BPH incidence and age. For example, men who are 50 years or older have approximately a 40–50% incidence of BPH while men 80 years and older have approximately a 90% incidence [16, 17, 18]. However, we observed higher use of finasteride by age even after controlling for BPH, thus this was another unexpected finding. Nevertheless, one study [19] that examined 5-ARIs use in a prospective cohort of men between 1996 and 2010 reported that 5-ARIs use was greater among older men. One potential explanation for this observation is that sexual side effects, such as decreased libido, ejaculate volume, etc. [13, 14] may not have been important enough to dissuade men in this current study from using finasteride.

Given that a majority of our study population was non-Hispanic white, the differences in use by race/ethnicity was an unexpected finding. However, most studies using 5-ARIs had low representations of minorities or did not report on race/ethnicity. For example, in the PCPT [4] 92% of the study population was comprised of non-Hispanic whites. In another study, that examined prostate cancer outcomes for active surveillance patients among users and non-users of 5-ARIs after an initial diagnosis of prostate cancer, there were no racial differences in 5-ARIs use. Similar to our study, this population was predominantly non-Hispanic white and 5-ARIs use was relatively low (107; 10.6%) [20].

Some experts have questioned whether the black box warning should remain in place for 5-ARIs. Follow-up analyses of the PCPT strongly suggest that detection-bias contributed, at least in part, to the observed increase in high-grade prostate cancer [4]. Specifically, 5-ARIs appeared to increase the sensitivity of both PSA [21] and standard prostate biopsies [22] for the detection of prostate cancer and detection of high-grade prostate cancer [23]. Furthermore, long-term follow-up of the PCPT showed that 15-year overall survival rates for the finasteride and the placebo groups were nearly identical (78.0% and 78.2%, respectively) [24] and that prostate cancer-specific mortality was lower (though not statistically significantly) in the finasteride group [25]. Given the long-term follow-up data and clear evidence of benefit in terms of risk reduction of low-risk prostate cancer, these drugs might warrant consideration for this indication in selected men, particularly those with lower urinary tract symptoms [26]. A recent systematic review [27] using over 2000 patients from 10 studies showed a statistically significant decrease in prostate cancer risk associated with use of 5-ARI drugs.

Our study is not without limitations. We must be cautious in interpreting the results regarding race/ethnicity as there were small numbers for some groups and a majority of the Asian/Pacific Islanders, for which we found a statistically significant difference, were from Hawaii. Thus, this result is not generalizable to the overall U.S. Asian/Pacific Islander population. In addition, we used prescription fillings as a proxy for medication use. While this is a common practice in the literature, we do not know if participants took all the medication from the prescriptions that they filled. Furthermore, there is no direct information concerning whether these men or their physicians were aware of the black box warning for 5-ARIs. However, physicians may generally be aware of such warnings as an automated generated list is provided to them for medication prescription purposes.

There may be a bias toward prescription of 5-ARIs for men with BPH. The Veterans Health Administration (VHA) 2004 recommendations [28] encouraged finasteride prescription for patients with BPH who did not see any improvements after using alpha blockers. In addition, as indicated by one study with the VHA [29], among all the risk factors (AA men, family history, elevated PSA, previous negative biopsy, moderate to severe BPH, Other) for prostate cancer chemoprevention, both urologists and primary care providers from the VHA would be more likely to prescribe finasteride for patients with moderate to severe BPH. The VHA 2004 recommendations and results from the VHA study (2000–2005), may partially explain the finasteride prescription patterns for our study population. However, we do not know if this finasteride prescription recommendation was adopted by physicians in our study several years later.

JAJ and PFP were responsible for conceptualizing the study, data analyses and interpreting the results. HLP and DNM provided critical review and feedback of the drafted manuscript. All authors read and approved the final manuscript.

We are very grateful to the peer-reviewers, your feedback made for a more robust manuscript.

The study flowchart depicts which men from the original Prostate, Lung, Colorectal, Ovarian Cancer Screening Trial were eligible for the current study.