Gynecologic (cervical, ovarian or uterine) and skin cancers are those most frequently encountered during pregnancy [1]. The estimated rate of cervical cancers ranges between 1 and 12 per 10,000 pregnancies. Due to its rarity, the management of cervical cancer remains a matter of debate, with few available data and lack of large studies and recommendation. Herein we report the case of a 33 years old women in whom an invasive stage IIA cervical cancer was diagnosed during her eighth month of pregnancy.

She was referred to department of gynecology at her 33 week of gestation, for metrorrhagia after a vaginal exam, and cervix induration. She had no medical history. She had a previous twin pregnancy in 2008 with vaginal delivery and a surgical abortion in 1998. Her last Pap smear was normal 5 years before.

Speculum examination revealed, around the anterior lip, a 2 centimeters burgeoning lesion of the cervix, bleeding on contact. There was no lymphadenopathy nor other pathological findings on general exam. 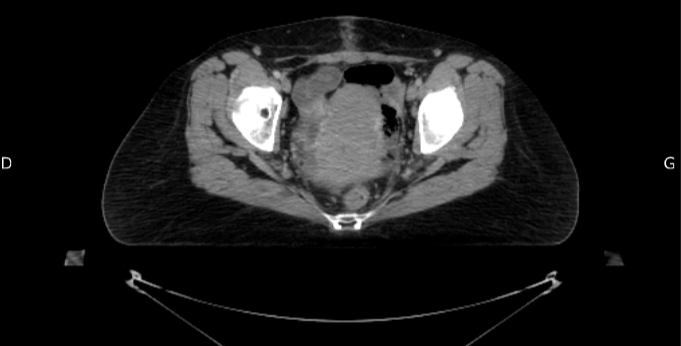 Not injected CT scan, before radiotherapy, for target area to be treated.

A multidisciplinary consultation meeting decided to realize a pelvic and paraaortic lymphadenectomy, before beginning chemoradiation therapy. Three weeks after nodal staging surgery, where no pathologic nodes on 6 were found, without lymphadenectomy, chemoradiation was started (Cisplatin 40 mg/m weekly, and 25 radiotherapy sessions of 45 grays in total). Brachytherapy was not realized because of the importance of cervix necrosis after chemoradiation.

Two days after the end of chemoradiation, she was hospitalized for asthenia and declared secondly, fever, abdominal pain. The vaginal swab found Streptococcus milleri and Bacteroides fragilis. The CT scan revealed necrosis of the cervix, urinary retention and a doubt of salpingitis. She received a triple antibiotic therapy. As the patient had been already treated with 8 sessions of radiotherapy on the cervix necrosis and on the pelvic nodes, brachytherapy was discouraged due to technical concerns.

One month later, she presented an endometritis treated by antibiotic therapy. MRI showed invasion of the posterior wall of the bladder and the bladder trigone, with tumor progression (measured at 8 cm tumor). The PET scan analysis confirmed local and locoregional tumor progression with new latero aortic and iliac axes nodes (Fig. 2). Hence, hysterectomy was contraindicated and a second-line chemotherapy with Paclitaxel, Topotecan and Bevacizumab was initiated.

Despite this, after 3 cycles, a new PET scan analysis found tumor progression with the tumor measuring 14 cm, hepatic metastasis, progression of para-aortic nodes, extension to vaginal area and compressive occlusion syndrome. The patient chose to stop chemotherapy and palliative care was initiated. She died 15 months after the initial diagnosis.

Knowledge about cervical cancer during pregnancy remains scarce, as it is an uncommon condition. Thus, neither randomized trial nor large studies are available to define high grade recommendations and management of such cases is controversial. According to French and European guidelines [2-4], locally advanced stage cancers diagnosed when fetal maturity is achieved should be treated with caesarean section and pelvic and/or para-aortic lymphadenectomy in the same time (pelvic and nodes with or without para-aortic nodes for tumors measuring greater than 4 cm or positive pelvic nodes). If the patient does not want to preserve her fertility, a radical hysterectomy can be conducted. After delivery, chemotherapy and radiotherapy are necessary.

In the present case, only caesarean section was performed and nodal staging surgery in a second time. Indeed, neither para-aortic lymphadenectomy nor hysterectomy were realized because this strategy was considered to be responsible for too high morbidity. Moreover, hysterectomy and brachytherapy could not be realized because of cervix necrosis. When assuming our patient’s evolution, a more aggressive strategy, as recommended, should probably be considered, as radical hysterectomy, as well as brachytherapy, could delay tumor progression, after neoadjuvant chemoradiation. Furthermore, a second surgery to process lymphadenectomy instead of during caesarean section is responsible for the delay of treatment, a key point in such cases. Moreover, nodal staging realized in a second time was incomplete (6 nodes vs 18 for complete para aortic lymphadenectomy [9]).

Regarding delivery, the cesarean section is recommended to avoid the risk of recurrence of cancer in the episiotomy site, frequently described in the literature [5]. Furthermore, cesarean section allows to avoid active pushing with the risk of pathological fractures in case of metastasis, or increased intracranial pressure in case of central nervous system metastasis [4]. The decision is also based on the presence or absence of tumor on the cervix. Indeed, the vaginal delivery can lead to higher risk of lymphovascular dissemination, major bleeding, infection, cervical laceration and cancer cell implantation in the episiotomy site [4,6].

To assess cancer extension, abdominal and pelvic ultrasound is useful to analyze liver and urogenital involvement [6]. MRI is the standard in pregnancy for staging, without Gadolinium injection in most cases (injection may be necessary for small lesions) [7]. If no fetal adverse effects have been reported after gadolinium exposure at any stage of pregnancy, precautionary principle dictate that gadolinium is excreted by the fetal kidney into the amniotic fluid with potential for dissociation of gadolinium ion from its chelate molecule (which then becomes toxic) [4]. Hence, injection should be limited as much as possible. Furthermore, MRI is helpful to describe lymph nodes and spread to adjacent organs (such as bladder and rectum) [6]. PET CT scan is not recommended because of the high fetal uptake of radioactivity [1]. A chest radiograph can be realized (after the first trimester to avoid fetal malformations), with abdominal protection, in stages IB2 disease, or in high risk histology tumors [2,6]. Lymphadenectomy is the gold standard for the staging of each disease at least IB [2,3]. A laparoscopic lymphadenectomy is possible during pregnancy before 18 to 22 weeks of gestation without risk for the fetus or the mother [8,9].

Only two cases occurring in the third trimester, with a IIA stage, are reported in the literature. Zhang and colleagues published in 2015 [10], 20 cases of cervical cancer during pregnancy, including one patient with stage IIA at 28 weeks of gestation, and decided to wait until fetal maturity is achieved. The cesarean section was realized at 34 weeks of gestation, following which she received Paclitaxel and Cisplatin, and a radical surgery was realized after two courses and finally she received adjuvant chemotherapy with Bleomycin, Ifosfamide, and Cisplatin. twelve months after treatment, she was considered to be in remission. In 2009, Chun et al.[11] reported the case of a 32 years old women, at 28 weeks of gestation, staged IIA, treated by neoadjuvant chemotherapy containing Carboplatin and Paclitaxel, cesarean section at 33 weeks with radical surgery and lymphadenectomy in the same time. She refused adjuvant therapies and 32 months after the diagnosis she developed a recurrent tumor treated by chemoradiation therapy. She was still under treatment at last follow up. In these cases of IIA disease diagnosed in the third trimester of pregnancy, different treatment strategies were chosen. One is similar to our patient, but the second undergone surgery at the same time as cesarean section.

Other cases reported cervical cancer occurring during the last trimester of pregnancy, albeit with different stages of disease; these include 7 cases, stage IB1 to IB2, which were treated either by cesarean section with surgery in the same time before chemoradiation therapy [12,13], or by neoadjuvant chemotherapy before surgery and adjuvant treatment [10,11,14,15]. Finally, three cases reported stage IIA cervical cancer during the first trimester of pregnancy. All were treated by neoadjuvant chemotherapy, before cesarean section and hysterectomy, chemoradiation therapy and brachytherapy after surgery [13,16].

Our case illustrates the difficult management of stage IIA cervical cancer diagnosed during the last trimester of pregnancy. On the one hand, fetal maturity is a major concern, on the other hand, caution is needed to limit the risk of disease progression. Once fetal maturity is achieved, the strategy of surgery remains controversial. According to the latest guidelines, surgery with lymphadenectomy with or without hysterectomy could have been proposed in our case. Efforts have to be invested in order to design studies to address this important issue.

Diagnosis of locally advanced cervical cancer during the last trimester of pregnancy remains challenging. Fetal maturity achievement is a major concern. The best surgery management, at the time of caesarean section, needs to be assessed. This issue is of great importance, as it may become more frequent in the next decades given the increasing late age of the first pregnancy in our society.

For cervical cancer diagnosed during pregnancy, extension should be assessed with abdominal and pelvic ultrasound, MRI and lymphadenectomy (for disease at least IB). Cesarean section is recommended to avoid recurrence of cancer in the episiotomy site.

All subjects gave their informed consent for inclusion before they participated in the study. The study was conducted in accordance with the Declaration of Helsinki.

Not injected CT scan, before radiotherapy, for target area to be treated.