Squamous odontogenic tumor (SOT) was initially described in 1975 by Pullon et al as an unusual, benign odontogenic tumor arising in close physical relationship to the dentition and originating from the epithelial rests of Malassez in the periodontal ligament or gingival epithelium [1-6]. Nowadays, no more than 110 cases have been described in the literature 3-12. In this study, we describe a case of a SOT which was histologically misdiagnosed as a metastatic carcinoma of unknown origin. In the discussion and review of the literature, the features of SOT along with the differential diagnosis and the appropriate treatment are described.

A 60-year-old Caucasian woman with a painless swelling of the mandible in the area of the right premolars visited the private practice of an Oral and Maxillofacial Surgeon. Clinically, no drainage or purulence could be identified.

In the patient gynecological history was referred, that the mentioned woman has Breast tumor, which was treated by tumorectomy. The histological finding was benign. The radiographic examination revealed a well-circumscribed periapical radiolucency in close topographical relation to the roots of the premolars, which had already undergone endodontic treatment. The surgeon considered the lesion to be a periapical cyst deriving from the past necrosis of the teeth and proceeded to an apicoectomy and cyst removal under local anesthesia. The area healed well in the clinical examination and no follow up visits were scheduled. However, 9 months later the patient appeared to the practitioner with a recurrence of the swelling. The radiographic examination showed a radiolucent area in the same position and with the same size. Due to that, the surgeon repeated the cyst removal procedure. The histological examination that followed was performed in a private practice and revealed a low differentiation metastatic carcinoma of unknown origin, most possibly a squamous cell carcinoma or an endocrine carcinoma.

Afterwards, the patient was referred to our clinic, with the clinical and radiographic appearance shown in Fig. 1. No significant lesion was appeared on the oral mucosa, behind the scar of the previous surgeries. The case was discussed in the Head and Neck Oncology council and a number of examinations found to be necessary. Specifically, the patient underwent a gastroscopy, a colonoscopy, a mammography, a whole-body CT, a bone scanning and a PET-CT, without any pathologic findings or signs of malignancy. The case was, then, reevaluated by the head and neck oncology council which decided to proceed to a partial resection of the right mandible. Simultaneous restoration wasn’t scheduled and the surgery was performed under general anesthesia with no complications. The histological examination that followed the surgical excision, surprisingly, showed a squamous odontogenic tumor. The trauma area healed uneventfully and the patient received no adjunctive therapy, due to the aggressive surgery we operated. She also denied any restorative surgery for the bridging of the bone defect. Ten years later no recurrence has occurred. The patient as she was referred to our clinic.

Squamous odontogenic tumor is a rare odontogenic tumor, since until today no more than 110 cases have been described and confirmed [5,6,8,9,12-14]. There is no sex or age predilection, but it seems that the Caucasian race is more frequently involved [12]. The lesion usually presents as an asymptomatic swelling in the alveolar process, with a tendency to arise in the premolar-canine region of the maxilla and the molar region of the mandible, but can occur throughout the jaws [2,7,6,13,15,16]. In many cases, SOTs are incidental discoveries on routine dental radiographs or panoramic x-rays, where they commonly present as a unilocular, often triangular, radiolucent defect between or along the roots of adjacent teeth, while they can also mimic severe periodontal bone loss. Mobility of the teeth that are closely related to the tumor may exist as the predominant sign [1,3,10,15,17,18].

The differential diagnosis based on the clinical and radiographic appearance of the tumor includes dentigerous cyst, odontogenic keratocyst, periodontal cyst, radicular cyst, adenomatoid odontogenic tumor, central odontogenic fibroma, hematological disorders, ameloblastoma and more rare other odontogenic tumors or metastasis [2,3,5,9,11,15,16]. It has been found that SOTs located in the maxilla behave more aggressively than in the mandible, due to the anatomy of the area and the porous, medullary nature of the bone. However, this is not considered pathognomonic . Due to these reasons and in order to avoid misdiagnosis, SOT diagnosis should only be established based on the histological features of the lesion evaluated after either its biopsy or its total excision and histopathological examination [13].

The histopathological features of SOT are similar to those of keratinizing variants of ameloblastoma, although keratinocytic differentiation is observed in the tumor mass. It is characterized by the occurrence of islands of well-differentiated squamous epithelium dispersed uniformly in a connective tissue stroma [4-6,13,16]Fig. 2. The islands are often of a rounded shape, though they tend to vary in shape and size. Their centers may present areas of cystic change, while keratinization of the central cells may be observed too Fig. 3. Laminar calcification in the epithelium and globular eosinophilic structures canal so be detected within the islands. Occasionally, an increased number of mitotic figures may be present. “Ghost cells” seen in a variety of odontogenic tumors, have not been reported as occurring in SOT [5,6,16]. 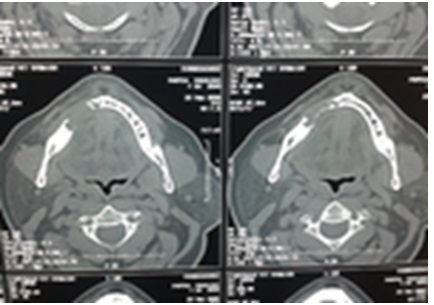 The radiographic images of the patient. The immunohistochemical staining patterns of keratin proteins are positive to pankeratin, to keratin 7, to low molecular weight keratin (KerLMW), to p63 protein and partially to high molecular weight keratin (KerHMW), while they are negative to vimentin, to S-100 protein, to keratin 20, to TTF1, to CD10 and to estrogen and progesteron receptors [2,6,11,19-22] (Fig. 4). Islands of well-differentiated squamous epithelium, without atypia or mitotic figures, in a fibrous stroma. H-E 200.

No case of malignant variants of SOT has been described. Nonetheless, in the English literature there is one reported case of bilateral maxillary SOT with simultaneous occurrence of intraosseous SCC in the mandible. However, the development from a SOT could not be proved [10,22]. In our case, the first histopathological diagnosis was that of a low differentiated metastatic carcinoma. This diagnosis was also confirmed by a second laboratory. After the partial mandibulectomy, which was performed as the indicated treatment for a metastatic carcinoma of the mandible, the histopathological diagnosis was that of a squamous odontogenic tumor. The eminent question is: what was the reason for the double misdiagnosis? Unfortunately, we could not cross check this diagnosis by reevaluating the bioptic material of the second cyst removal knowing the final diagnosis after the mandibulectomy.

SOTs present some degree of pleomorphism, hyperchromatism and occasionally an increased number of mitotic figures, which were noticed in the first two histopathologic results. These characteristics are reported to have been mistakenly diagnosed as squamous cell carcinoma by pathologists unfamiliar with the neoplasm [2,6,11,19-22]. Moreover, squamous cell carcinomas display an irregular distribution of keratin. The staining reactions of the tumor cells in the initial diagnosis were strong in the keratins CAM5.2, less strong to keratins 34BE12 and weak to keratin 7, 20, while it was negative to keratins 5/6, to antigen TTF1, to CA125 and to estrogen and progesterone receptors. All these facts, led to a misleading initial diagnosis suggesting malignancy and a contradictory final diagnosis with no signs of malignancy [2,6,11,19-22].

The reported case is worth to be referred due to the wrong initial diagnosis of a malignant lesion which resulted in the overtreatment of the patient. The benign nature of the SOT suggests conservative surgical local excision, curettage and scaling of the adjacent teeth, with few reported cases of recurrence [12]. Only maxillary lesions may necessitate slightly more extensive procedure due to the relatively aggressive nature of the maxillary SOT. No adjuvant treatment is required in the literature. In the present case, ten years after the mandibulectomy, our patient remains free of recurrence (Figs. 5-7). In conclusion, SOT is an odontogenic tumor which is usually not recognized, as it is painless and it is usually considered as a periapical or a periodontal cyst. SOT diagnosis should only be established based on the histological features of the lesion evaluated after either its biopsy or its total excision and histopathological examination. The physician needs to be aware of this kind of tumor and confirm the diagnosis histologically. 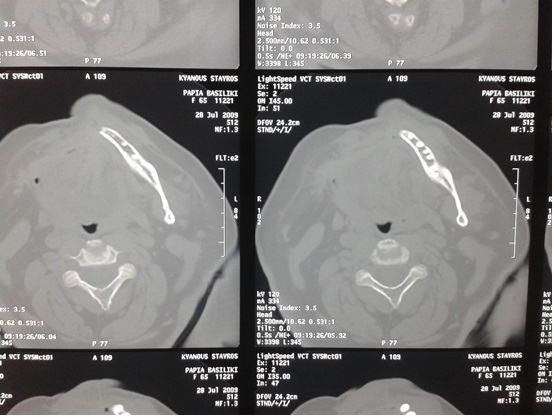 The radiographic images of the patient as it is today. 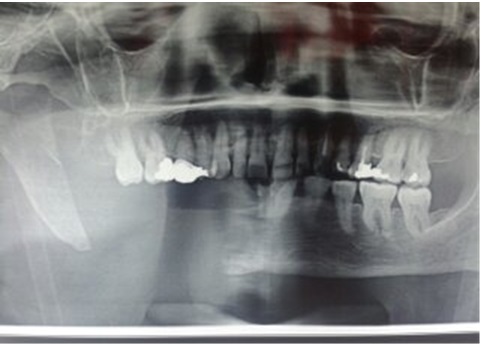 All subjects gave their informed consent for inclusion before they participated in the study. The study was conducted in accordance with the Declaration of Helsinki, and the protocol was approved by the Ethics Committee of University Hospital Papanikoloau, Thessaloniki.

The authors thank the outpatient examinationsroom and surgery nurses for funding support for research on this collection of data.

The patient as she was referred to our clinic.