Transient global amnesia (TGA) is a sudden onset disease, in which episodic memory is anterogradely lost. During the ictal event, the patient repeats the same questions. The symptoms then return within 24 hours [1, 2, 3]. TGA has an annual incidence of between 3.4 and 10.4/100,000. The cause is unknown, but it is known to occur more frequently after the age of 50 [1, 2, 3]. In most cases, TGA symptoms develop once, but in rare cases, two or more relapses have been reported [4]. TGA is a common neurological disease, but its pathophysiologic mechansism has been still unknown [4].

Additionally, we analyzed glymphatic system function in patients with TGA according to recurrence in this study. TGA typically occurs only once in a patient’s lifetime; however, in an estimated 6–10% of patients, TGA may occur repeatedly [3]. We have recently demonstrated that the functional network of patients with TGA differs according to the frequency of recurrence [22], and discovered significant structural covariance network changes as well as disruptions of the intrahippocampal circuit in TGA compared to control subjects, which is more pronounced when amnestic events recur [23]. As a result, we hypothesized that the glymphatic system function might be different in terms of recurrence. However, there has been no study evaluating glymphatic system function according to TGA recurrence. In the current study, we examined these two hypotheses.

Additionally, we included healthy controls who were age and sex matched and had no prior history of medical or neurological disease. These individuals’ MRIs of the brain were normal. The data on these healthy controls were obtained from a previous study [25]. Those who did not want their data to be used in this study were excluded.

The patients and healthy controls were all scanned DTI using the same MRI scanner, 3.0T (32-channel head coil, AchievaTx, Phillips Healthcare, Best, The Netherlands). In the patients with TGA, all of the MRI scanning were performed during postictal period. DTI parameters in a detail were already described in our previous studies [26, 27].

Although this was the first study using the DTI-ALPS method in patients with TGA, we have already conducted researches using this method in patients with other neurological disorders. Our previous article described the method for calculating the ALPS index in detail [15]. This was done using DSI studio program. To summarize, we opened the raw DTI data and applied a mask. We used the DTI method to reconstruct the fibers and determined their major diffusion direction. We determined the fiber orientation and diffusivities along the x, y, and z axes in the region of interest (ROI) adjacent to the lateral ventricle as voxel levels [13]. We chose one ROI for each fiber, including projection, association, and subcortical fibers, on the same x-axis from the several voxels that showed the fiber’s maximum orientation. The ALPS index was calculated using the formula [13].

The Chi-square test, Fisher’s exact test, Student’s t-test or Mann-Whitney U test were used to compare the demographic and clinical characteristics, diffusivities, and ALPS index between two groups. We determined effect size by Cohen’s d method. A two-tailed p-value of 0.05 was considered statistically significant. When comparing diffusivities between groups, we used the Bonferroni correction (p = 0.005 (0.05/9)). All statistical analyses were conducted with the MedCalc® Statistical Software version 20 (MedCalc Software Ltd., Ostend, Belgium; https://www.medcalc.org; 2021).

3. Results
3.1 Demographic and Clinical Characteristics of the Participants

Initially, a total of 83 patients met the clinical diagnostic criteria for TGA and had DTI MRI conducted with the same MRI scanner at our hospital. However, 11 patients were excluded from this study (nine patients had structural lesions on their brain MRI and two patients had poor image quality for analysis). Finally, 72 patients with TGA and 53 healthy controls were enrolled. The clinical characteristics of patients with TGA and healthy controls are shown in Table 1. Age and gender did not differ significantly between groups (59.1 vs. 57.2 years, p = 0.166; males, 29/72 vs. 23/53, p = 0.727). Sixty-five of the 72 patients with TGA experienced a single TGA event, while seven experienced recurrent TGA events (Six patients with two times of TGA events and one patient with three times of TGA events). The median time interval between the TGA events was six months (range 1–24 months) in the patients with recurrent TGA events. Between patients with a single TGA event and those with recurrent events, demographic and clinical characteristics were comparable (Table 1).

Table 1.The demographic and clinical characteristics of patients with TGA and the healthy controls.
3.2 ALPS Index and Diffusivities 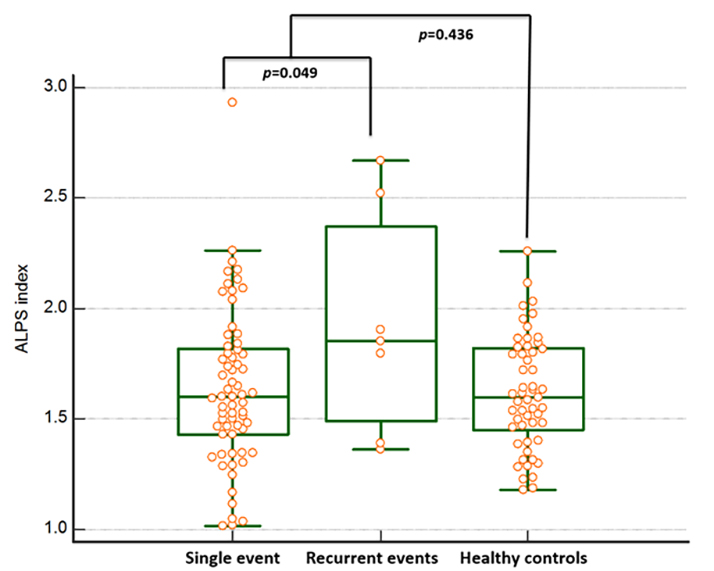 Differences in the ALPS index between the groups.

Table 2.Differences in the diffusivities and ALPS index between patients with TGA and the healthy controls.

Our study is the first investigation on glymphatic system function in patients with TGA using the DTI-ALPS method that also involved a large sample size. However, there were some study limitations. First, this study was conducted at one hospital. Because our hospital is a tertiary hospital, our study results cannot be applied to all patients with TGA and therefore cannot be generalized. In addition, although we enrolled a relatively large number of patients with TGA, the sample size for patients with recurrent TGA events was relatively small. This is a result of the low incidence of recurrence in TGA events. Nevertheless, in statistical analysis, it is a well-known fact that the good balance between the two groups being compared is needed. Second, glymphatic system function is reportedly different during the waking and sleeping states; in particular, glymphatic system function is increased during deep sleep [42]. By contrast, all of our patients had their MRIs taken during the day while they were awake, because our hospital allows MRI scans during the day. If MRI scans had been taken while the patients were sleeping, the results could be different from the present findings. It is not known whether the function of the glymphatic system function observed in structural MRI, such as DTI, rather than functional MRI, differs depending on the day and night. To confirm this fact, two MRI scans are needed in the same patient, both daytime and nighttime. Third, because this study is a retrospective study, it was difficult to accurately determine the time from TGA symptom onset to MRI taken. Therefore, the difference in glymphatic system function according to time interval could not be analyzed. A prospective study will be needed.

This work was supported by the 2021 Inje University research grant.

Differences in the ALPS index between the groups.