Traumatic brain injury (TBI) is one of the most common causes of disability in adults, and is categorized as mild, moderate, and severe, depending on the severity [1, 2]; 70–90% patients with TBI is categorized as mild TBI [3, 4]. Memory impairment is an important sequelae of mild TBI, with previously reported incidence up to 25% of patients with postconcussional syndrome among patients with mild TBI [5, 6, 7]. Memory is related to accumulate and preserve individual experiences and plays a key role in the mental activities and whole brain [8]. Among the variety of memory function, the short-term memory means keeping information in mind for a short period of time and temporary storage, organization, and processing of information to guide reasoning and goal-directed behavior [9, 10]. It takes charge of transient information processing and direction of complex cognitive activity related to frontal and posterior cortical areas and subcortical structures [11]. The prefrontal cortex (PFC) has been reported to be involved in memory function [12, 13, 14]. specially, the dorsolateral prefrontal cortex (DLPFC) among the PFC is an important neural structure in short-term memory [11, 15]. Therefore, elucidating the relationship between short-term memory impairment and the DLPFC injury following TBI would be important in terms of rehabilitation; especially, for neuromodulation such as repetitive transcranial magnetic stimulation and transcranial direct-current electrical stimulation [16, 17]. However, it has not been clearly elucidated so far.

Previous studies have employed functional magnetic resonance imaging (fMRI), magnetoencephalography (MEG), and electroencephalographic (EEG) to evaluate the DLPFC [6, 18, 19, 20, 21]. However, these methods are not sufficient to detect DLPFC injury, because the DLPFC is not clearly distinguished from near neural structures. By contrast, the introduction of diffusion tensor tractography (DTT), which is developed from diffusion tensor imaging (DTI) results, has enabled three-dimensional reconstruction and assessment of the DLPFC. Therefore, DTT has advantage to determine the degree of detect injury of the DLPFC more accurately than the above evaluation methods [22]. However, no study on the relationship between short-term memory impairment and the DLPFC injury in patients with mild TBI has been reported.

In this study, using DTT, we investigated the relationship between short-term memory impairment and the DLPFC injury in patients with mild TBI.

Forty-six consecutive patients (male: 19, female: 27, mean age 32.84 6.49 years) with TBI and 42 normal control subjects (male: 16, female: 26, mean age 35.17 8.33 years) with no previous history of neurological, physical, or psychiatric diseases were enrolled. Inclusion criteria for the patients were as follow: (1) post-traumatic amnesia for 24 hours, an initial Glasgow Coma Scale score of 13–15, and loss of consciousness for 30 min [23, 24]. (2) no specific lesion identified on T1-weighted, T2-weighted, and Fluid attenuated inversion recovery MRI images, (3) more than one month since TBI, (4) age range 20–49 years, (5) no previous history of head trauma, neurologic or psychiatric disease. Table 1 summarizes the demographic and clinical data of the patient and control groups. This retrospective study protocol was admitted by the institutional review board of Yeungnam University Hospital (ethical number: YUMC 2021-03-014).

Table 1.Demographic and clinical data of the patient and control groups.
2.2 Clinical evaluation

DTI data were acquired an average of 5.86 3.36 months after the onset of TBI using Synergy-L Sensitivity Encoding (SENSE) head coil on a 1.5 T Philips Gyroscan Intera system (Philips Ltd, Best, Netherlands) with a single-shot, spin-echo planar imaging pulse sequence. 60 contiguous slices were obtained parallel to the anterior commissure-posterior commissure line for each of the 32 non-collinear diffusion sensitizing gradients according to the following condition: acquisition matrix = 96 96, reconstructed to matrix = 192 192, field of view = 240 mm 240 mm, TR = 10.398 ms, TE = 72 ms, parallel imaging reduction factor (SENSE factor) = 2, EPI factor = 59 and b = 1000 s/mm, number of excitations (NEX) = 1, thickness = 2.5 mm. Using probabilistic tractography in the default tractography option, fiber tracking was performed in the Oxford Centre for Functional Magnetic Resonance Imaging of the Brain Diffusion Software (FSL version 5.0, Analysis group, FMRIB, Oxford, UK) (5000 streamline samples, 0.5 mm step lengths, curvature thresholds = 0.2). Including the diffusion in each voxel of both dominant and nondominant orientation, 5000 streamline samples from seed regions of interest (ROI) were calculated. For tracking of the prefronto-thalamic tracts [22, 27], a seed ROI was assigned on the mediodorsal nucleus of the thalamus on the coronal plane of the b0 map and each target ROI was placed on the b0 map as follow: DLPFC of 8, 9, and 46 Brodmann areas (BAs) on the coronal plane, ventrolateral PFC (VLPFC) of 44, 45, and 47 BAs on the coronal plane, and orbitofrontal cortex (OFC) of 47/12, 10, 11, and 13 BAs on the axial plane [27, 28]. With the threshold of 2 streamlines, the prefronto-thalamic tracts were implemented by choosing fibers passing through seed and each target ROI (Fig. 1). 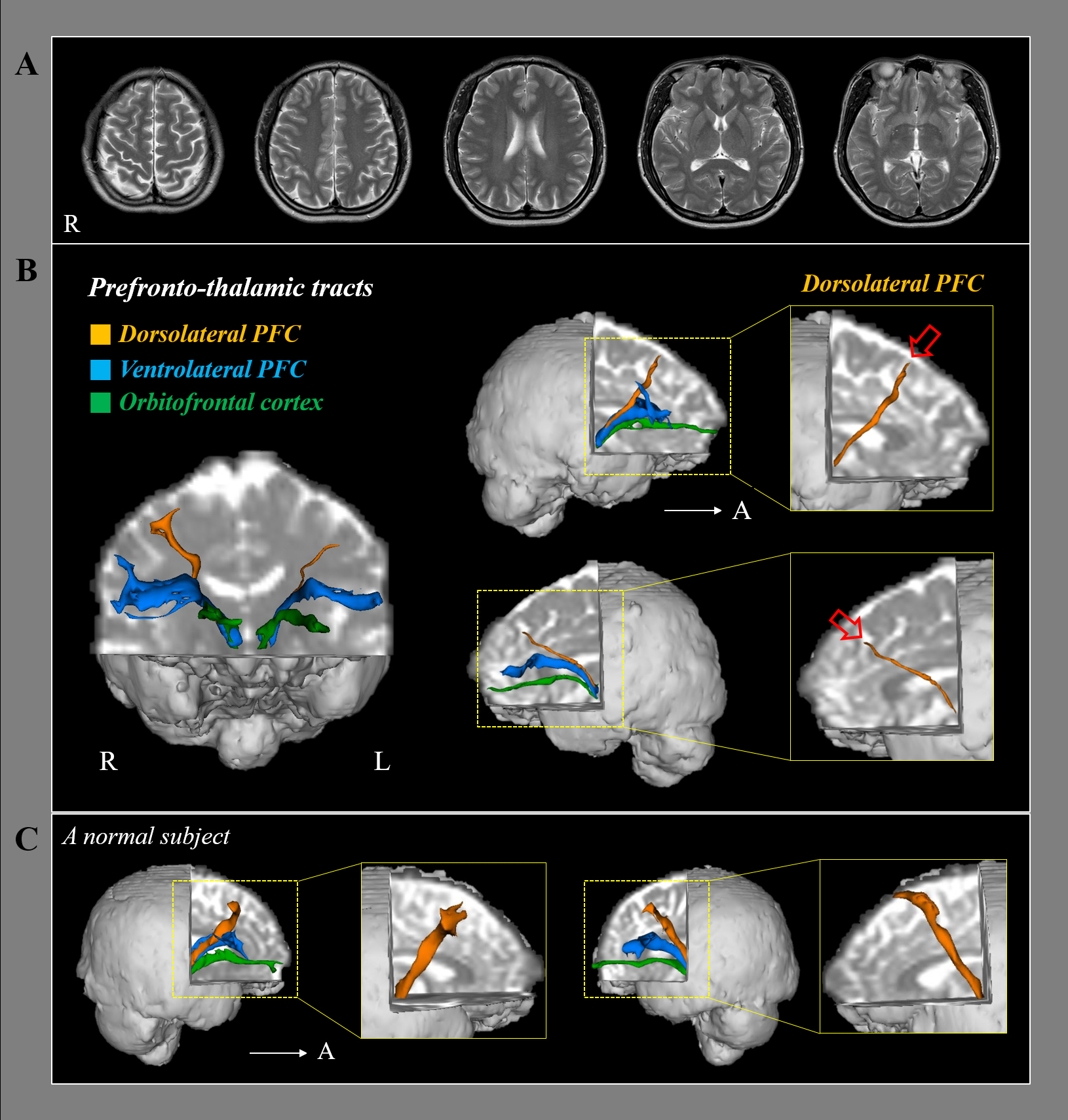 Through the SPSS software (v. 5.0; SPSS Inc., Chicago, IL, USA), the independent t test was conducted for evaluation of differences between DTT parameters [fractional anisotropy (FA) and fiber number (FN) values] of the prefronto-thalamic tracts (DLPFC, VLPFC, and OFC) in the patient and control groups. The Pearson correlation test was used to identify the Relationships between short-term memory and DTT parameters of the prefronto-thalamic tracts. The correlation coefficient (r-value) indicates the relative strength and direction of the linear relationship (none or very weak: 0.3, weak: 0.3–0.5, moderate: 0.5–0.7, strong: 0.7) between two values [29]. The significance level of the p value was set at 0.05.

Table 2.Diffusion tensor tractography parameters of the prefronto-thalamic tracts in the patient and control groups.

A few studies have demonstrated on abnormality of the DLPFC in patients with short-term memory impairment using brain imaging techniques including fMRI, magnetoencephalography (MEG), and electroencephalographic (EEG) following mild TBI [6, 20, 21]. In 2012, Chen et al. [6], reported that decreased activation in the around of the DLPFC including bilateral frontal and parietal areas during memory test using fMRI in 20 patients with memory impairment following mild TBI. In 2018, Arakaki et al. [20], demonstrated decreased activation on the fronto-parietal areas among the 10–20 system during memory test on EEG in 20 patients with short-term memory impairment following mild TBI. In 2019, Lawton et al. [21], reported on the low-level visual timing deficits and high-level cognitive functioning including the short-term memory during memory test in four patients with mild TBI who remarkable lower activating in the DLPFC including frontal pole on MEG. As a result, to the best of our knowledge, the present study is the first to demonstrate a relationship between the short-term memory impairment and the DLPFC injury in patients with mild TBI using DTT. However, the limitations of this study should be considered. First, although short-term memory impairment might be associated with various neural tracts including the fornix, cingulum, prefronto-limbic circuit and Papez circuit, these tracts were not investigated due to the main purpose of this study describing DLPFC injury in mild TBI. Second, because this study was conducted retrospectively, we could not able to evaluate additional clinical data about the short-term memory for the DLPFC injury. Furthermore, we could not provide clinical data for memory of normal control subjects. In addition, the education period of each group could not be considered. Lastly, DTI data should be corrected when examining the frontal area that is vulnerable artifacts because of geometric distortion and signal drop [32]. Therefore, further studies to control the above limitations should be recommended.

All participants signed a written informed consent beforehand, which complies with the Helsinki Declaration, and all research activities were admitted by the institutional review board of Yeungnam University Hospital (YUMC 2021-03-014).

This work was supported by the Medical Research Center Program (2015R1A5A2009124) through the National Research Foundation of Korea (NRF) funded by the Ministry of Science, ICT, and Future Planning.