Although a robust association between OSAHS and cognitive deficits is established by previous studies, Kilpinen et al. [5] pointed out that future studies were needed to further clarify the joint effects of OSAHS and other comorbidities including obesity on cognitive function. Obesity often coexists with OSAHS. Obesity can not only increase the risk of OSAHS, but also have a negative impact on cognitive function [6]. Studies have shown that obesity itself can lead to cognitive dysfunction [7, 8]. A variety of obesity indexes, including body mass index (BMI), Waist to hip ratio (WHR) and waist circumference (WC) have been shown to hold a negative impact on learning, memory and language ability [9]. Meanwhile, in children and adolescents, obesity and OSAHS have been shown to exert a synergistic effect on cognitive deficits [10, 11, 12]. However, the joint effects of OSAHS and obesity on cognitive function in adults are unclear.

A study found that in young people, compared with mild OSAHS and the control group, moderate to severe OSAHS is associated with increased total tau levels [13]. Another study found that in the middle-aged, the blood A40, A42, and phosphorylated tau levels of OSAHS subjects were significantly higher than those of the control group [14]. These studies all suggest a potential link between OSAHS and A40, A42 and tau protein levels.

The subjects were the patients admitted to the First Affiliated Hospital of Nanchang University and underwent polysomnography (PSG) between February 2019 and September 2020 due to snoring symptoms. All subjects received a questionnaire survey of basic information and past medical history before PSG. After completing these survey, the Epworth Sleepiness Scale (ESS) [15] was used to assess subjective sleepiness. This study was approved by the ethics committee of the First Affiliated Hospital of Nanchang University and was carried out following the Declaration of Helsinki. Subjects were informed of the general content of the study before taking the test, followed the principle of voluntariness, and signed the informed consent.

Subjects are not allowed to drink tea, alcohol, or coffee within 24 hours before monitoring and must not have a history of taking sedatives and hypnotic drugs shortly. All subjects used a PSG based on a non-interference single laboratory to monitor and scored respiratory events. Simultaneously recorded electroencephalogrphy, electromyogram, electrooculogram, electrocardiogram, nasal cavity and oral airflow, Chest and abdominal cavity respiratory activity, snoring, pulse oximetry, and other data. All tests started before 10:00 at night and ended after 6:00 AM the next day.

(2) Symbol Digit Modalities Test (SDMT) [20]: SDMT is a scale used to assess attention and processing speed. The subjects were asked to fill in the symbols corresponding to the numbers in the form within 90 seconds. The number of correctly completed within 90 seconds (correct number) is recorded as an analysis indicator.

(3) Trail making test-Part A (TMT) [21]: TMT is also a scale used to assess attention and processing speed. Record the time (in seconds) spent to complete all connections, the number of errors, and the number of pen strokes. The shorter the time, the better the performance.

After receiving the PSG monitoring, we draw 5 mL of fasting blood from the subjects participating in the blood test. Use a centrifuge to separate the serum within 60 minutes at 3000 rpm and 10 minutes. After separation, use a cryotube to store and immediately freeze at –80 C until determined in batch. Radioimmunoassay (RIA) was used to detect the levels of A40, A42, and tau protein. All protein kits were purchased from the Beijing Huaying Institute of Biotechnology. The detection operation steps are carried out in strict accordance with the requirements of the instructions.

Data are presented as means SD, medians (interquartile range), and numbers (percentage) if they were normally distributed, skewed, or categorical, respectively. The correlation between the variables was confirmed by spearman correlation analysis. Differences in basic characteristic between the groups were examined by Mann-Whitney U test, t test, chi-square test or Fisher’s exact test according to distribution. Differences in cognitive function assessments and protein levels between the groups were examined in an analysis of covariance (ANCOVA) with adjusting for multiple confounding factors. Multiple linear regression models were used to determine the influencing factors of each cognitive function assessment and protein levels. Interaction effects of OSAHS and abdominal obesity was examined with ANCOVA. SPSS 22.0 (SPSS Inc., Chicago, IL, USA) and R software version 4.0.3 (R Foundation for Statistical Computing, Vienna, Austria) were used to perform statistical analysis. A p value 0.05 was considered to indicate statistical significance.

Table 3.Comparison of baseline characteristics, PSG, A40, A42 and tau protein between the non-severe OSAHS and severe OSAHS groups.
3.2 Relationships between OSAHS and Cognitive Function The correlation between AHI and each score of the MoCA scale.

The correlation between AHI and SDMT and TMT-A indexes. (A) SDMT. (B) TMT-A. The correlation between A40, A42 and tau protein, and AHI. The legend on the right of the circle graph shows the correlation coefficients corresponding to different colors. Above the circle: ns: no significance. 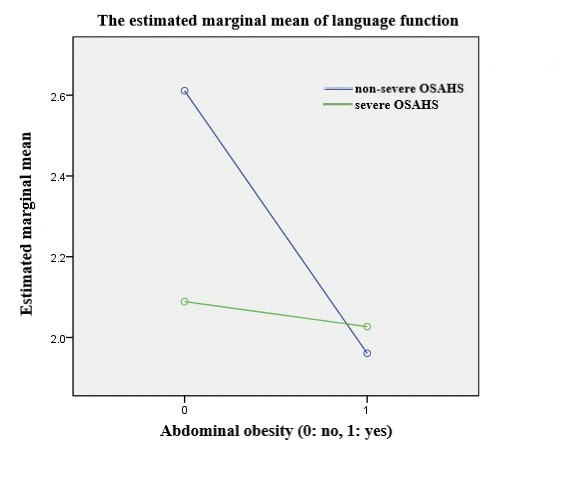 At present, it is mainly believed that OSAHS especially impaired cognitive function through intermittent hypoxia and disrupted sleep architecture. Long-term intermittent hypoxia can cause cerebral vasoconstriction and changes in cerebral hemodynamics, which slows down the blood flow rate, further making the brain in a state of low perfusion for a long time, and ultimately aggravating neuronal hypoxia [24]. The cerebral cortex, hippocampus, and cerebellum are particularly sensitive to hypoxia and easy to be damaged to cause cognitive deficits [25]. Meanwhile, the inflammatory response and oxidative stress response triggered by intermittent hypoxia [26, 27] will also lead to cognitive deficits, showing short-term decreased attention and vigilance, long-term memory, and decreased executive function [27]. Besides, sleep structure disturbances, manifesting as sleep fragmentation and total sleep time reduction caused by repeated arousals, prolonged light sleep, and shortened deep sleep, are also be shown to aggravate cognitive deficits [28]. Sleep fragmentation damages the fine structures of the brain and destroy the integrity of axons extensively [29]. Long-term lack of sleep causes permanent neuronal degeneration, especially in memory-related brain regions such as the hippocampus, reduces the activation of the frontal and parietal networks and changes the internal functions of the thalamus [30].

Previous studies have found that the lack of sleep, disturbed sleep and intermittent hypoxia of OSAHS elevated the level of A and tau protein in brain by increasing the production and decreasing the clearance rate of them, which caused the deposition of A and tau protein in brain, forming amyloid plaques and neurofibrillary tangles, leading to neurodegeneration and cognitive deficits [31, 32, 33, 34]. Thus, A and tau protein play an important role in the OSAHS-related cognitive deficits. Thus, we also explored the relationships between these protein level and OSAHS to add more evidence. We found that A40 protein levels of subjects with severe OSAHS group were significantly lower than those with non-severe OSAHS, and severe OSAHS was an independent negative influencing factor of A40 protein level, which was inconsistent with previous study [14]. However, our results are consistent with those of Madaeva et al. [35]. Different levels of A42 in the blood at different stages of the disease might explain the divergent results. At early stage, OSAHS induces increased production and decreased clearance of A, resulting in an increase in its level [33]. Later, as the condition of OSAHS worsen, cognitive function further declines and the consumption of a large amount of A to form the amyloid plaques occurs, which leads to a decrease of its level.

Obesity has been identified as a risk factor for OSAHS [36, 37]. Weight gain reduces the size of the upper respiratory tract, thereby increasing the incidence of apnea events [38]. And the physiological component of obesity, including blood sugar control, insulin action, and leptin signaling, cause a greater reduction in the muscle tone of the pharyngeal dilator and increase the chance of obstruction during sleep [36]. Meanwhile, obesity is shown to have a negative impact on cognitive function [6, 7, 8, 9]. In our study, we also found that abdominal obesity had strong main effects on visuo-spatial and executive ability and language ability (Table 5).

There are some limitations in this research. First of all, the cognitive domains evaluated in this study are limited, including only the metrics that cover cognitive domains and individual attention and information processing speed in MoCA. Secondly, although this study has a larger sample size than many previous single-center studies, it still failed to get more positive results, suggesting that such studies require larger sample size data to support. Therefore, the results of this study still need to be confirmed in large samples and in other populations in the future. Third, although we have adjusted some factors that may affect cognitive function, we cannot adjust the interference of other confounding factors that cannot be measured, such as APOE4 genotype and tester’s skill level. Fourth, we have not been able to find a suitable mechanism to explain the interaction of abdominal obesity and severe OSAHS on language ability. Despite this, the sleep data and the relatively large sample size increased the credibility of our results.

This study was approved by the ethics committee of the First Affiliated Hospital of Nanchang University (Approval No. 2019- 051) and was carried out following the Declaration of Helsinki. Subjects were informed of the general content of the study before taking the test.

The authors sincerely thank all the participants and the supporting from the Research Fund Project of Jiangxi Provincial Department of Education (180017) and the Jiangxi Natural Science Foundation Project (Grant No. 20202BABL216028).

The correlation between AHI and each score of the MoCA scale.