Alzheimer’s disease (AD) is recognized as a global public health disease that deserves special attention as no definitive treatment has been found since its discovery by Alois Alzheimer in 1907 [1]. Growing evidence has shown an association between Type 2 diabetes and AD [2], highlighting the functional relevance of brain insulin signaling in the context of this disease. AD is a progressive neurodegenerative disorder characterized by beta-amyloid deposition and neurofibrillary tangles containing hyperphosphorylated tau that triggers dementia [3]. High levels of oxidative stress and brain inflammation in glial cells (microglia and astrocytes) that lead to synapse damage/elimination are also hallmarks of AD [4]. Importantly, in addition to neuronal loss, insulin resistance in the brain has been demonstrated in AD patients [5].

Insulin receptors (IR) are highly expressed in the brain. They are transmembrane receptors activated by insulin, insulin-like growth factor-1 (IGF-1) or IGF-2 and belong to a large class of tyrosine kinase receptors. The role of insulin in the brain is related to food intake and energy expenditure. Studies in rodents have shown that insulin administration into the third ventricle decreases food intake and the expression of the main satiety-related genes, such as the orexigenic neuropeptide Y and agouti-related peptide, concomitant with increased expression of the anorectic neuropeptides proopiomelanocortin and cocaine and amphetamine-regulated transcript in the arcuate nucleus of the hypothalamus [6].

Besides its role in the control of energy balance, a relationship has been described between insulin sensitivity within the brain and AD. Patients with AD have reduced expression and activation of IR, IGF-1 receptor and insulin receptor substrate-1 (IRS-1) proteins in the brain, particularly in the hippocampus and hypothalamus. Patients also exhibit increased serine phosphorylation in IRS-1, a phenomenon associated with insulin resistance [7]. Recent findings indicate that AD is affected by accumulation in the brain of soluble oligomers of the amyloid- peptide (AOs). These oligomers have been identified as neurotoxins that induce IR loss on the surface of cultured hippocampal neurons. They damage synapses, causing loss of function, oxidative stress and inflammation that ultimately leads to cognitive loss [8]. Learning impairments are apparent in mice models for AD (e.g., APP/PS mice), which in addition to having glucose tolerance and insulin sensitivity similar to wild-type controls, have increased IRS-1 pSer616 in the cortex and dentate gyrus, indicating local resistance to insulin [9]. Another study has shown that glucose tolerance and insulin sensitivity are impaired in the same transgenic mouse model prior to amyloid plaque pathogenesis and cognitive decline. This suggests that insulin resistance may be involved in AD pathophysiology [3].

In the current issue, Goodman et al. [10] report investigations of a role for IR signaling in NPY neurons of the hippocampus in the context of cognitive functioning. The authors used a mouse model of cell-specific knockout for IR in NPY-expressing neurons using Cre-LoxP technology. These mice were evaluated in the Morris Water Maze test to investigate if IR ablation in NPY cells would cause alterations to this cognitive task. Mice were tested at 6, 12 and 24 months of age and it was observed that these knockout mice displayed an impaired performance compared with control mice at both 6 and 12 months, but not at 24-months. The model was validated by immunohistochemistry for phosphorylated Akt, a marker of insulin signaling pathway activation. It was shown that, compared to the control group, the knockout group had reduced phosphorylation of Akt in the dentate gyrus of the hippocampus after insulin infusion. Regarding energy balance, male mice lacking the expression of IR in NPY neurons had a higher body weight when compared to control mice at 6 months, but no difference was subsequently observed within either males or at all within the female group. Male mice consumed more calories than females but this effect was independent of IR ablation. Neither glucose tolerance nor insulin sensitivity was affected by IR ablation. No impairment in learning performance across the groups was observed in the Morris Water Maze test as all groups demonstrated similar escape latencies on day one and reached the platform faster on the training days at all ages. However, the time spent in the target quadrant, measured to assess hippocampal-dependent memory, was reduced in the knockout group during the probe trial at 6 and 12 months of age, demonstrating that ablation of IR in NPY cells caused specific deficits of spatial memory retrieval during a hippocampal-dependent memory task [10].

The findings reported in this article support previous studies that have shown central IR signaling to play crucial roles in spatial memory, a result observed through the high expression of IR within the dorsal hippocampus [11]. The novelty in this research is the identification of a potential population of NPY neurons through which insulin partially enhances cognitive performance. The authors further inferred that NPY neurons in the dentate gyrus of the hippocampus might be implicated in these effects, a conclusion reached by measuring the pAKT in this area and observing its decrease in the knockout mice following insulin injection. This result is aligned with the states of central insulin resistance that also trigger reduced pAKT [12] and is relevant in the context of cognitive pathologies seen in Alzheimer’s disease, especially as insulin resistance has been implicated with these conditions [13].

Since the number of people affected by diabetes has been growing exponentially, studies that identify the mechanisms that link insulin resistance to AD may help in the development of therapies for this degenerative disease. As mentioned above, insulin signaling is vital in brain homeostasis and any imbalance involving inflammatory processes whether by the accumulation of AOs, mitochondrial dysfunction and insulin resistance may provide a connection between diabetes and AD (Fig. 1). 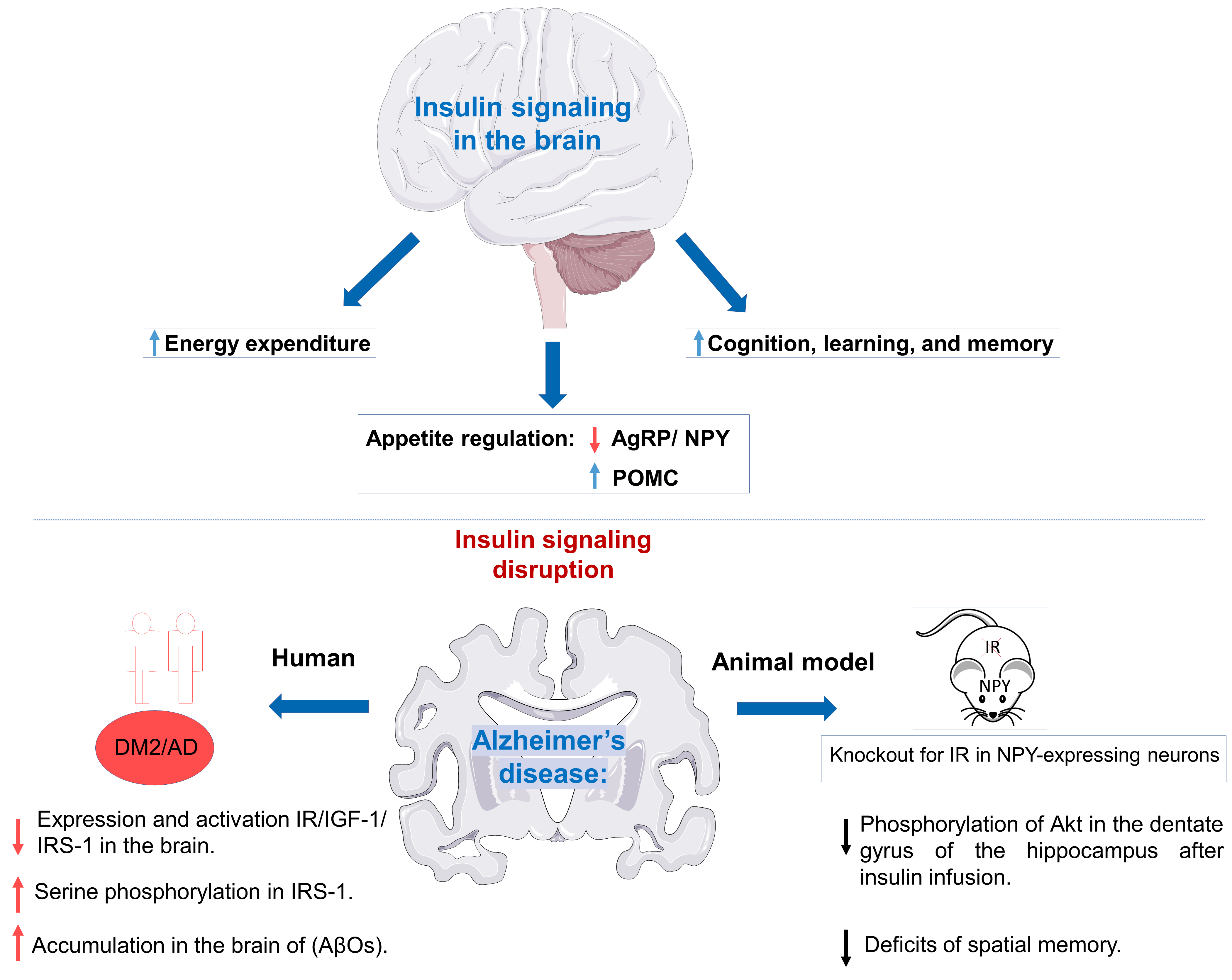 Scheme summarizing the metabolic and cognitive effects of insulin receptor signaling in the brain. Note that central insulin signaling is necessary for the regulation of energy homeostasis and normal cognition. Insulin receptor (IR) ablation in neuropeptide Y (NPY)-expressing neurons recapitulates some cognitive deficits observed in AD.

The author declares no conflict of interest. JDJ is serving as one of the Editorial Board member of this journal. We declare that JDJ had no involvement in the peer review of this article and has no access to information regarding its peer review. Full responsibility for the editorial process for this article was delegated to RF.

Scheme summarizing the metabolic and cognitive effects of insulin receptor signaling in the brain. Note that central insulin signaling is necessary for the regulation of energy homeostasis and normal cognition. Insulin receptor (IR) ablation in neuropeptide Y (NPY)-expressing neurons recapitulates some cognitive deficits observed in AD.