§Alzheimer's Disease Neuroimaging Initiative, Data used in preparation of this article were obtained from the Alzheimer's Disease Neuroimaging Initiative (ADNI) database (adni.loni.usc.edu). As such, the investigators within the ADNI contributed to the design and implementation of ADNI and/or provided data but did not participate in analysis or writing of this report. A complete listing of ADNI investigators can be found at: http://adni.loni.usc.edu/wpcontent/uploads/how_to_apply/ADNI_Acknowledgement_List.pdf

Alzheimer’s disease (AD) is the main cause of dementia, which is characterized by extracellular accumulation of aggregated -amyloid (A), intracellular aggregation of hyperphosphorylated tau, and synaptic dysfunction [1,2]. The failure of several disease-modifying therapies AD highlights the need to further explore diverse disease mechanisms and biomarkers alterations that characterize AD [3-7]. Cerebrospinal fluid (CSF) A42 and tau have been used to diagnose AD and monitor disease progression [8]. In the past decade, other biomarkers have been confirmed to further characterize the pathophysiological process of AD [9].

Neurofilaments are the structural components of axons, which can be measured in CSF [10,11]. In CSF, neurofilament proteins (cytoskeletal protein of neurons), including neurofilament light chain (NFL), were associated with axonal degeneration in various diseases, including AD [12]. Several reports have suggested that CSF NFL are elevated early in the AD process and are associated with longitudinal neurodegeneration and cognitive decline [13]. Interestingly, recent studies have demonstrated that concentrations of NFL derived from plasma were elevated in patients with AD and related to CSF A and tau and positron emission tomography (PET) [14-16].

However, the diagnostic value of CSF NFL or plasma NFL (NFL in plasma) for mild cognitive impairment (MCI) or AD is unclear [14,17]. Similarly, it is not clear whether the combination of CSF NFL and plasma NFL can improve the diagnostic accuracy of MCI and AD, or whether CSF or plasma NFL forecasts progression from cognitively normal (CN) control to MCI or as from MCI to AD. The purpose of this study is, therefore, to examine the hypotheses that the combination of CSF and plasma NFL improve the diagnostic accuracy for MCI and AD and whether CSF and plasma NFL predict progression from MCI to AD or from CN to MCI or AD in participants enrolled in the Alzheimer’s Disease Neuroimaging Initiative (ADNI) study [18]. We also assess whether CSF or plasma NFL is related to cognitive dysfunction, brain structure, and cerebral metabolism.

The CN criteria include MMSE score 26–30 and CDR of 0 [19,20]. The MCI criteria consisted of subjective memory complaints, MMSE score 24–30, CDR of 0.5, and retained activities of daily living [21]. In addition to the NINCDS/ADRDA criteria, AD individuals had MMSE scores of 20–26 and CDR scores of 0.5 or 1.0 [22]. We referred to MCI subjects who did not progress to AD during a follow-up period of at least 2 years as sMCI and MCI participants who developed to AD at any time during the follow-up period as pMCI [23].

As described previously [24], Multiple xMAP Luminex platforms and Innogenetics INNO-BIA AlzBio3 immunoassay reagents were used to measure the levels of CSF A42, total tau (T-tau), and phosphorylated tau (P-tau). A water buffer solution containing a combination of three biomarkers was used to draw a calibration curve for each biomarker. The concentration range of the three biomarkers was as follows: (1) synthetic A1-42 peptide was 27 to 1574 pg/mL, (2) recombinant tau was 56 to 1948 pg/mL, and (3) the synthetic peptide of tau phosphorylated at position 181 of threonine was 8 to 230 pg/mL. CSF NFL was tested using a commercial ELISA for NFL (NF-light® ELISA, Uman Diagnostics, Umeå, Sweden) [13,25]. The lower limit of quantification for this CSF NFL was 50 ng/L. Values were given as pg/mL. Plasma NFL concentrations were tested by Single-Molecule array (Simoa) technology using a homebrew kit. All samples except one (due to technical reasons) were measured in duplicate.1 (1All CSF data in our work were from the ADNI files “UPENNBIOMK5-8.csv”,“BLENNOWCSFNFL.csv”, and “ADNI_BLENNOWPLASMANFL_10_03_18.csv”.) . MMSE and ADAS-Cog-11 scores evaluated global cognitive function2 (2The data of this work were from ADNI files “MMSE.csv” and “ADAS_ADNI1. csv”.). We selected the baseline scores of MMSE and ADAS-Cog 11. We also selected the baseline hippocampal and ventricular volumes3 (Neurodegeneration, hippocampal and ventricular volumes were obtained from the ADNI files “FOXLABBSI_08_04_17.csv” and “UCSDVOL.csv”.). The neuroimaging methods of ADNI have been described previously [26].

The baseline data of ADNI PET images were collected and processed according to the descriptions by Landau et al. [27]. In short, we applied the mean PET SUVRs in anterior cingulate, lateral and medial frontal lobes, lateral temporal lobes, lateral parietal, and posterior cingulate [23]. (F) FDG-PET values were normalized using the pons as a reference region.

Cohort demographics were examined using chi-square analysis and analysis of covariance (ANOVA). Multivariate linear regression was used to measure the relationship between CSF NFL or plasma NFL and clinical diagnostic group, adjusted for age and gender.

The correlation between CSF NFL or plasma NFL and other core biomarkers was examined using Spearman correlation. The overall diagnostic accuracy (area under the receiver operator characteristics curve, AUC) of each biomarker was obtained by Receiver operating curve (ROC) analyses. The difference of AUC between two pairs of different biomarkers was measured using bootstrapping.

To examine the relationship between CSF NFL or plasma NFL and AD dementia, Cox proportional hazard regression analysis (adjusted age and gender) calculated hazard ratios (HR) with 95% CIs. According to the median of each biomarker, CSF NFL and plasma NFL were divided into two groups in Cox proportional hazard regression analyses.

Baseline values of MMSE, ADAS-cog 11, hippocampal and ventricular volumes, and FDG-PET SUVRs were obtained from the intercepts of linear mixed-effects models. The intercepts were subsequently used in linear regression models, and the CSF and plasma NFL values were used as the predictor of clinical diagnostic groups adjusted for age and gender. MMSE and ADAS-cog-11 analyses were additionally corrected for education. Hippocampal and ventricular volume analyses were additionally corrected for intracranial volume. All statistics were conducted using SPSS version 20 (SPSS Inc., Chicago, IL, USA). The statistical significance of all analyses was defined as p 0.05.

The biomarker characteristics and demographics of all subjects are shown in Table 1. There were no differences in age or education among clinical groups. There were significantly fewer female individuals in the sMCI group compared to CN and AD groups. Apolipoprotein E (APOE) 4 carriership was more common in AD than CN and sMCI and more common in pMCI than CN.

Table 1.Demographics of subjects at baseline.
3.2 The levels of NFL in different groups 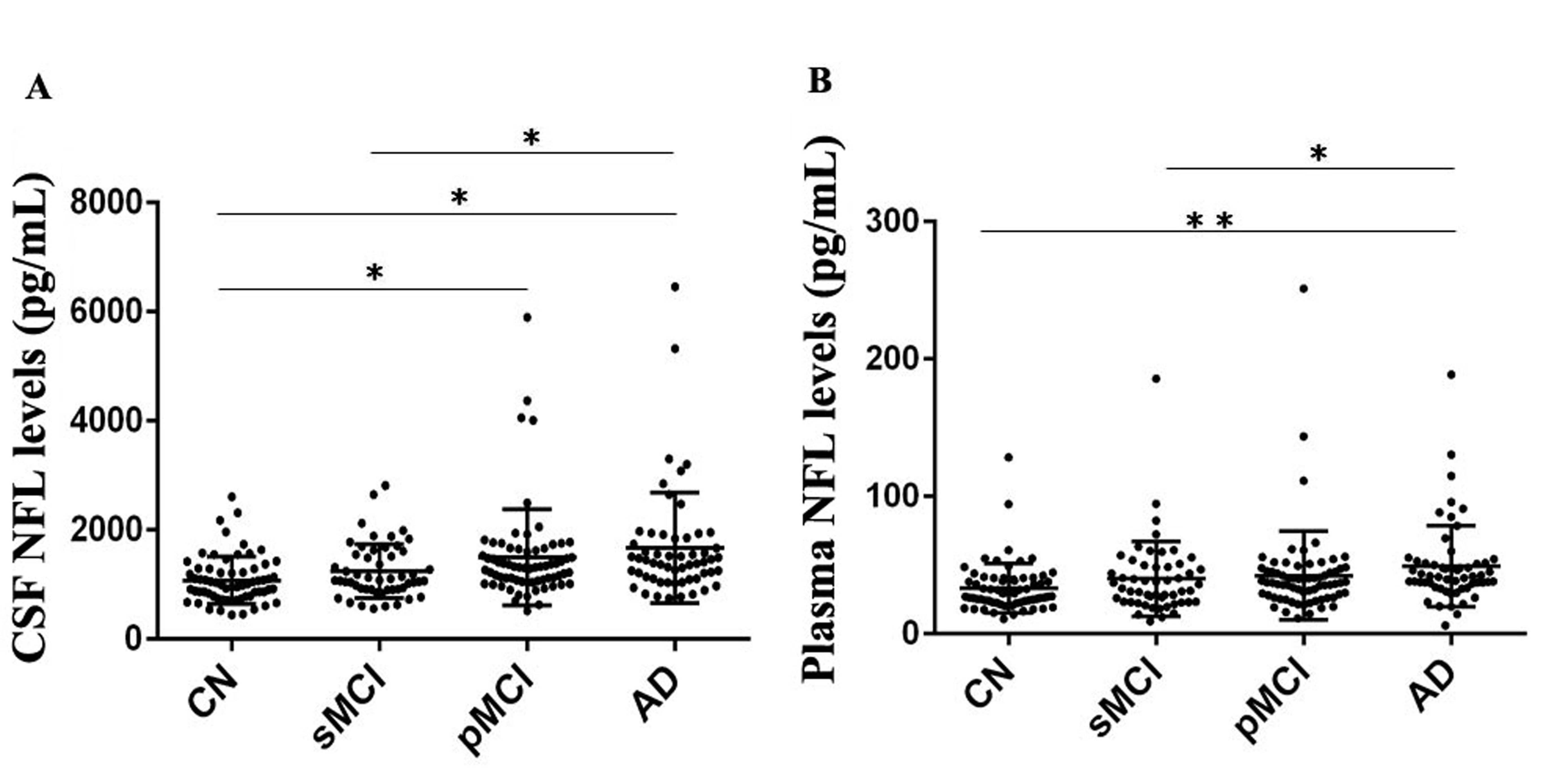 3.3 Associations between NFL and other biomarkers CSF NFL in relation to plasma NFL and other biomarkers. Relationships between CSF NFL and plasma NFL(A) and A42 (B)and tau biomarkers (C and D) in different groups.

Plasma NFL in relation to other biomarkers. There are relationships between plasma NFL and A42 (A) and tau biomarkers (B and C) in different groups.

ROC analyses. ROC analyses were used to assess the CSF biomarkers associated with clinical diagnoses for sMCI (A), pMCI (B), and AD (C). 3.6 NFL in relation to baseline cognition 3.7 NFL in relation to baseline metabolism and brain structure 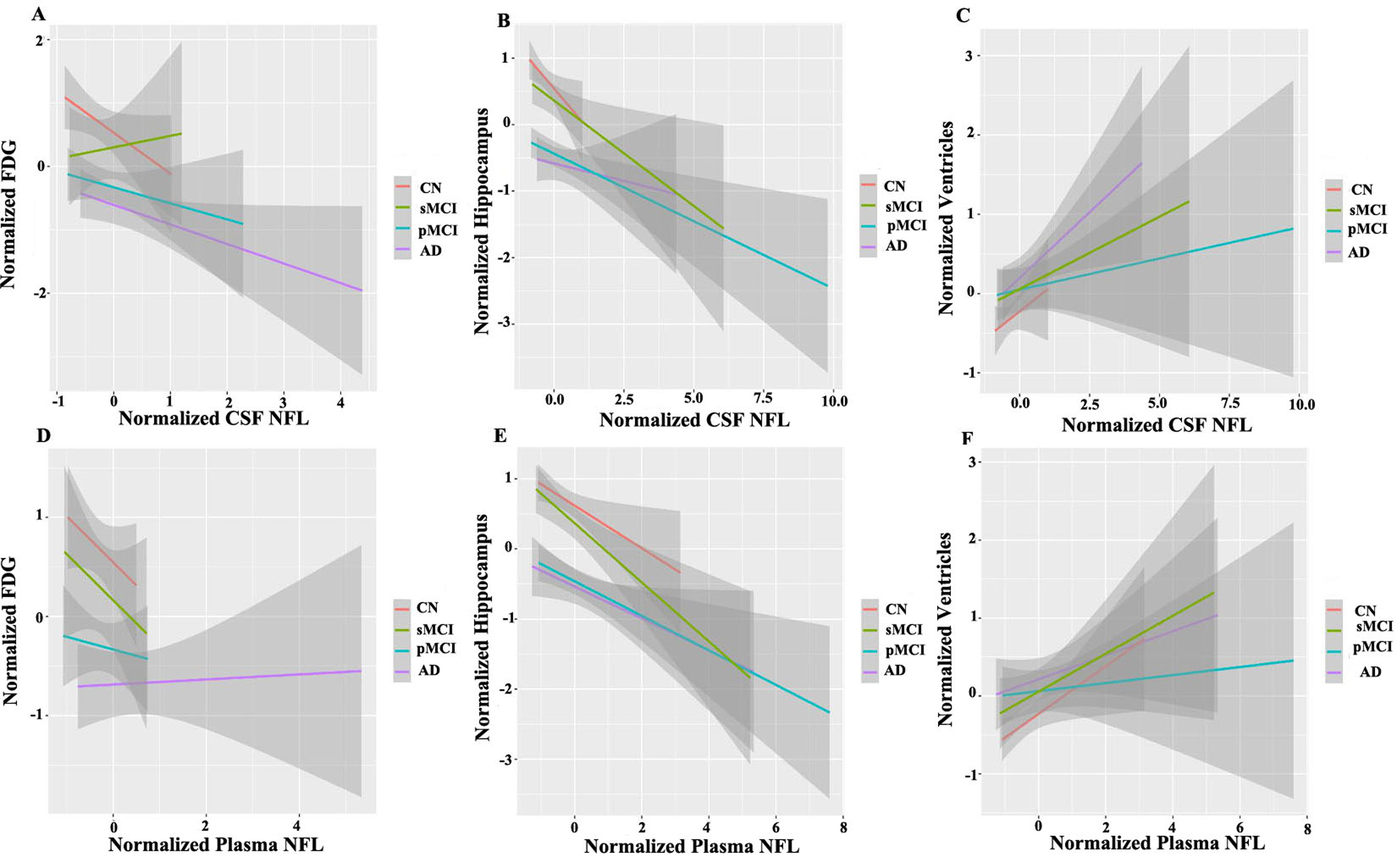 In line with a previous study [13], we report that CSF NFL was significantly higher in pMCI and AD dementia than CN individuals. We also observed there were significant differences between sMCI and AD. However, contrary to some existing reports [14,15,17], plasma NFL in our study was significantly different between CN and AD and between sMCI and AD. Still, there were no significant differences among CN, sMCI, and pMCI. One explanation for these differences is that the number of cases in our study is relatively small, and the sampling bias is large. Moreover, in the present study, the correlations between CSF and plasma NFL with other CSF biomarkers were usually not statistically significant in the diagnostic groups. This finding may confirm the presence of several different pathological conditions in AD (such as A pathological characteristics, tau pathological changes, different types of axonal degeneration) and drive different biomarker reactions, which are generally weakly correlated [14].

There is increasing evidence that axonal degeneration is a surrogate indicator of AD neurodegeneration progression [1,28]. Although it has been shown that the combination of plasma NFL and MMSE could reliably predict whether MCI patients might progress to AD dementia within 5 years [29]. To our knowledge, no studies using Cox proportional hazard models have evaluated the predictive value of CSF NFL for the conversion from CN to MCI or AD and from MCI to AD. Here, we demonstrate that CSF NFL but not plasma NFL provides predictive value for future disease progression in MCI participants. Our findings indicate that CSF NFL may contribute to the prognostic roles of CSF A42, T-tau, and P-tau in predicting the evolution of cognitive impairment.

Previous research has reported that plasma NFL might be a promising biomarker of progressive cognitive decline in elderly patients with MCI [30]. We examined the associations between CSF or plasma NFL and cognition. Statistically significant interactions were found at baseline for the sMCI group and MMSE or ADAS-cog 11 and the AD group and MMSE or ADAS-cog 11. These results suggest that CSF and plasma NFL were more strongly associated with the cognitive outcomes in sMCI and AD than in CN at baseline. It has been shown that in the MCI group, higher CSF NFL concentrations were related to faster brain atrophy over time, as measured by changes in whole-brain volume, ventricular volume, and hippocampal volume [13]. In addition, Mattsson et al. [14] reported that elevated plasma NFL was associated with AD-related atrophy (baseline and overtime) and brain hypometabolism (over time).

Our results show that CSF and plasma NFL were correlated with several baseline imaging measures of AD-related neurodegeneration, including low cortical glucose metabolism, hippocampal atrophy, and ventricular enlargement. These relationships were particularly pronounced with CSF and plasma NFL in relation to large ventricles in CN, sMCI, and AD groups. These results indicate that AD’s cognition, brain structure, and cortical metabolism may be related to axonal degeneration. However, there were some inconsistencies in the correlation between NFL and cognition and between NFL and brain metabolism or structure. For example, the correlations between MMSE or ADAS-Cog and CSF or plasma NFL in pMCI patients were the opposite of all other groups.

CSF and plasma NFL concentrations are significantly higher in other neurodegenerative diseases other than AD than healthy controls [28,31-34]. In addition, although a previous study investigated that CSF NFL had the potential to help distinguish frontotemporal dementia from AD and Parkinson disease from atypical Parkinson’s syndrome [34], the diagnostic usefulness of CSF and plasma NFL might be limited due to the finding that it is also elevated in other neurodegenerative diseases, indicating low specificity for AD.

Our results support the use of NFL as a biomarker of axonal degeneration. CSF and plasma NFL were significantly elevated in AD. In addition, compared with CSF T-tau and P-tau, CSF and plasma NFL had similar diagnostic accuracy for pMCI and AD. Moreover, high CSF NFL predicted conversion from MCI to AD. Finally, high CSF and plasma NFL are related to poor cognition, low metabolism, hippocampal atrophy, and ventricular enlargement at some stages of AD. These findings may suggest the potential use of NFL in trial designs, monitoring response to therapies, treatment decisions, and outcome evaluations.

The Institutional Review Boards of all participating institutions approved the ADNI study. All participants in each centre obtained informed written consent. ADNI makes all its data publicly available. Our manuscript was approved and accepted for submission by the ADNI Data and Publications Committee (ADNI DPC). For more details, please see: http://adni.loni.usc.edu/data-samples/access-data/.

This study was supported by the Medical Research Project of Chongqing Healthy Committee (2018MSXM058).