Sepsis is defined as life-threatening organ dysfunction caused by a dysfunctional host response to infection. Sepsis-associated encephalopathy (SAE) is widely understood to be a diffuse brain disorder that occurs with sepsis but in the absence of central nervous system infection or other forms of encephalopathy (Singer et al., 2016). It is usually characterized by a disturbance in the sleep-wake cycle, impaired consciousness, mild cognitive impairment, apparent delirium, or coma (Sonneville et al., 2013). The prevalence of SAE is difficult to define due to inconsistencies in naming and the uncertainty of diagnostic methods. However, in patients with severe sepsis, the incidence of SAE is approximately 9%-71% (Molnar et al., 2018). Brain injury is one of the most common and early outcomes of multiple organ dysfunction syndromes (MODS) in sepsis (Dal-Pizzol et al., 2014). SAE is generally considered the primary factor determining the clinical evolution and prognosis of sepsis (Shulyatnikova and Verkhratsky, 2019). It is, therefore, of great importance to study the pathogenesis of SAE to identify effective treatments, thereby improving prognosis and reducing the social and economic burden of patients diagnosed with sepsis.

The complete pathophysiology of SAE remains unclear. There is an urgent need to improve the understanding of how specific cellular interactions respond to central nervous system insults and how these insults develop and are controlled by complex molecular signaling mechanisms. However, many mechanisms have been identified as potential factors for pathogenesis, including changes in blood-brain barrier permeability (Cervos-Navarro et al., 1983), mitochondrial and oxidative stress (Berg et al., 2011), direct nerve injury, increased levels of cytokines and pro-inflammatory factors (Jacob et al., 2011), vascular endothelial dysfunction (Jeger et al., 2013), neurotransmitter disorders and changes in amino acid content (Basler et al., 2002). As the basic unit of an organism, the maintenance of cells and their function greatly affects the occurrence and development of cerebral diseases. Glial cells, in particular, are responsible for central nervous system homeostasis (Verkhratsky et al., 2013). Astrocytes, the most abundant glial cells in the brain, have many functions, including maintenance of ion and fluid balance, neurotransmitter metabolism, neurogenesis, maintenance of synaptic connections, and synaptic plasticity (Shulyatnikova and Verkhratsky, 2019). The defensive function of astrocytes is characterized by astrogliosis, which is a multi-component and complex remodeling of astrocytes caused by damage to the central nervous system (Brosius et al., 2014).

Pathological changes of astrocytes depend on the nature and severity of the damage and are regulated by specific and complex intracellular and intercellular signals (Sofroniew and Vinters, 2010). Astrogliosis is associated with beneficial effects but may be harmful in certain situations. Recently, research into the role of astrocytes in central nervous system diseases has gradually increased (Pekny et al., 2016), for example, neurotrauma, stroke, Alzheimer’s and Huntington disease, yet there are few studies on astrogliosis in SAE. Studying the pathological characteristics of astrocytes in SAE should help understand the associated pathophysiological changes. In this study, primary cultured astrocytes were incubated with lipopolysaccharide (LPS), and interferon-γ (IFN-γ) to construct an in vitro model of SAE (Zhao et al., 2017), observe the pathological changes of reactive astrogliosis and provide a new tool for the exploration of SAE pathogenesis.

2.3 Establishment of the SAE model in primary cultured astrocyte

Astrocytes were seeded to give three replicates in 96-well plates at a density of 104 cells per well. The different treatments were applied for 12 hours. The control group was treated with DMEM/high glucose medium. CCK-8 (BOSTER, Beijing, P. R. China) was used following the manufacturer’s instructions, and the 96-well plates were incubated at 37 °C for 1.5 hours. Cell viability was reported as the ratio of optical density values of experimental wells to control wells.

Cultured medium concentrations of TNF-α (tumor necrosis factor-α), IL-6 (interleukin 6), NO (nitric oxide), and cell homogenate concentrations of ROS (reactive oxygen species) obtained from the above groups were assayed by the ELISA kit (Andy, Beijing, P. R. China). All procedures were performed according to the manufacturer’s instructions.

Astrocytes were seeded in 24-well plates, and the cells were treated as described above. Cells were fixed at room temperature in 4% paraformaldehyde for 30 minutes, blocked with 0.1% Triton X-100 for 30 minutes, blocked with goat serum at room temperature for two hours, and incubated with primary antibody against GFAP (diluted 1 : 500; Abcam) overnight at 4 ℃. After washing with PBS (phosphate buffered saline), cells were incubated with Alexa Fluor 488-conjugated goat secondary antibody (1 : 200, Abcam, Cambridge, UK) at room temperature for two hours. Images were acquired with a fluorescence microscope.

Data are presented as mean±standard deviation (mean±SD). SPSS 19.0 (SPSS, Chicago, USA) software was used to analyze the data. Each experiment was performed in triplicate. The statistical significance of differences for group comparisons was evaluated using a one-way ANOVA followed by a least significant difference test or Dunnett’s T3 test. Statistical significance was assumed at P < 0.05 for all tests.

To explore the effects of LPS and IFN-γ treatment, a CCK-8 assay was employed to detect the proliferation of primary cultured astrocytes. After incubation with LPS and IFN-γ, cell viability was decreased compared to control cells (Fig. 1). 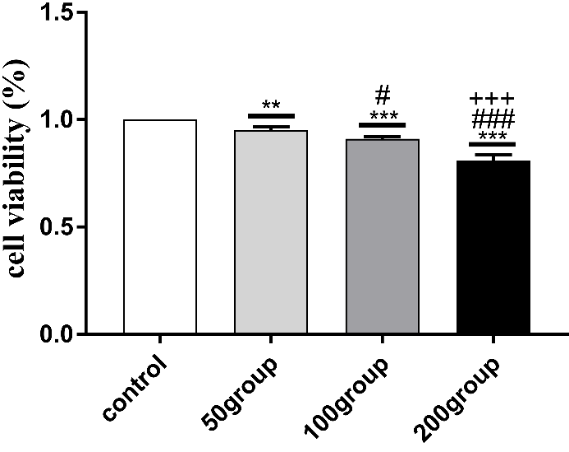 Cell homogenate concentration of ROS obtained from the treated groups was elevated compared to that of the control group. To detect whether LPS and IFN-γ mediated the increase of ROS, the control, and treated groups were examined by ELISA. (Fig. 3). 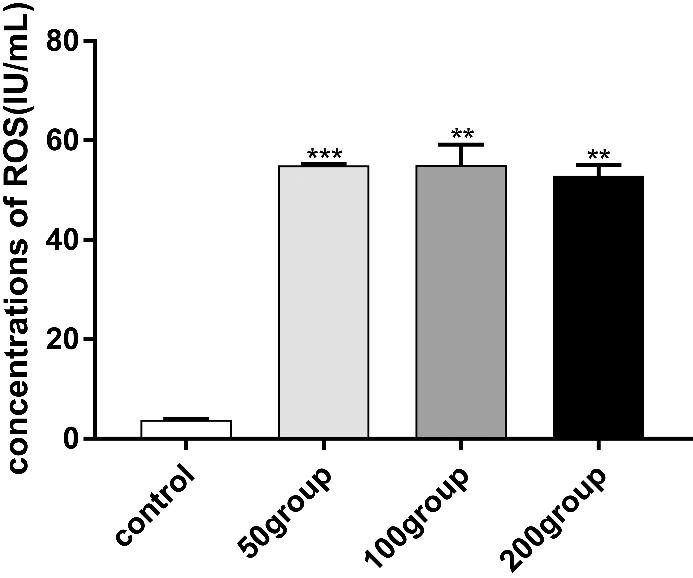 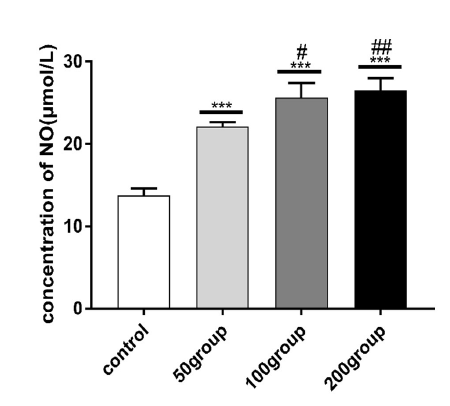 Astrocyte hypertrophy is a morphological marker of reactive astrogliosis. Immunocytochemistry was used to observe the morphological changes of astrocytes under different conditions. Astrocytes were seeded in 24-well plates and subjected to various treatments, as described above. Compared with the control group, different degrees of astrocyte hypertrophy were observed in each treatment group (Fig. 5).

3.6 Expression of GFAP upregulated in primary astrocytes incubated with LPS and IFN-γ

LPS combined with IFN-γ upregulated GFAP levels in primary cultured astrocytes. Astrocytes were treated with DMEM, LPS (50 ng/mL, 100 ng/mL, or 200 ng/mL) and IFN-γ (20 ng/mL) for 12 hours. Western blot analysis was used to determine changes in the levels of GFAP. Incubation of cells with LPS (100 ng/mL, or 200 ng/mL) and IFN-γ (20 ng/mL) changed the pathogenesis outcome of astrogliosis in SAE. Apoptosis and necrosis were detected by Apoptosis Fluorescence Hoechst 33342/PI double staining kit. Fluorescent images were analyzed with Image J software. (A): Representative photomicrographs are shown. (B): Proportion of apoptosis. (C): Proportion of necrosis. Fluorescence images were analyzed with Image J software. (A): Image obtained from the fluorescence microscope. (B): Fluorescent image converted to an 8-bit grayscale image. (C): Grayscale image was inverted to black and white. (D): Threshold chosen to isolate necrotic cells in the image. (E): A threshold was chosen to isolate necrotic and apoptotic cells in the image. (F): Threshold has chosen such that all cells in an image were selected.

The pathogenesis of sepsis is complex, and there are many factors that influence prognosis. SAE is an independent risk factor for sepsis (Deng et al., 2013). It is necessary to study the pathogenesis of SAE and develop appropriate interventions to improve clinical outcomes for sepsis. Recently, research on central nervous system diseases has gradually shifted focus from neurons to the study of non-neuronal cells (Goritz et al., 2011). For example, glial cells play important roles in central nervous system diseases. Changes in glial cell function following injury may have significant effects on neuronal interactions and central nervous system function (Burda and Sofroniew, 2014). Systemic inflammation can damage both neurons and neuroglia in the brain and particularly affects activation of neuroglia, which is involved in the immune response of nerve tissues to inflammatory injury in SAE (Michels et al., 2017). As the most abundant glial cells, astrocytes provide the necessary support to neurons, mediate brain immunity, maintain the integrity of the blood-brain barrier and secrete inflammatory factors (Stogsdill et al., 2017). The pathological changes that occur in astrocytes during disease are multifaceted and characteristic of both the disease and disease stage (Verkhratsky et al., 2016, 2017). Reactive astrogliosis is an evolutionarily conserved process for the genetic, morphological and functional reconstruction of astrocytes following nerve tissue damage (Liddelow et al., 2017).

An in vitro model of SAE was established through combined treatment with LPS and IFN-γ (Wang et al., 2014). LPS is produced by gram-negative bacteria and induces inflammatory responses in cultured astrocytes through pathogen-associated molecular patterns. Also, primary cultured astrocytes do not secrete IFN-γ, so it was hypothesized that combined incubation with LPS and IFN-γ might better mimic the stimulatory effects of a septic environment in terms of inflammatory response compared with LPS or IFN-γ alone. CCK8 results show that cell viability decreased with LPS and IFN-γ incubation.

TNF-α and IL-6 are early indicators of sepsis (Kruttgen and Rose-John, 2012), and their concentrations are associated with outcomes in patients with sepsis. NO, and ROS play key roles in the pathogenesis of sepsis and also indicate oxidative stress and nitric stress in SAE, respectively (Kawakami et al., 2018; Neri et al., 2016). The results of this study showed that the concentrations of these indicators increased in the test groups compared with the control group. In this, in vitro model of SAE it was observed that astrocytes were hypertrophic, and GFAP expression increased after incubation with LPS and IFN-γ. This indicates the occurrence of reactive astrogliosis. Through the observations of pathological changes in astrocytes, it was found that the proportion of apoptotic astrocytes increased when astrocytes were incubated with LPS (100 ng/ml, or 200 ng/mL) and IFN-γ (20 ng/mL) compared with those of control group, while the proportion of apoptotic astrocytes in total astrocytes did not change when they were incubated with either LPS (50 ng/mL) or IFN-γ (20 ng/mL).

These findings suggest that reactive astrogliosis may provide protective effects for astrocytes incubated with LPS and IFN-γ. Reactive astrocytes help protect and limit the transmission of pathologic drugs through nerve tissue by establishing physical and molecular barriers to the spread of these factors. In essence, astrogliosis is a defensive response designed to protect nerve function and limit damage to nerve tissue. However, in some cases, astrogliosis may have neurotoxic and harmful effects (Liddelow et al., 2017). The significance of reactive astrocytes in diseases of the central nervous system is dependent on the specific disease environment and presents a two-fold activity (Pekny et al., 2014) as reactive astrogliosis has been found to have protective effects in the acute phase, but neural regeneration and plasticity responses may be inhibited if it persists (Wilhelmsson et al., 2004).

Reactive astrocytes play important roles in response to central nervous system injury. Without these functions, tissue damage and dysfunction in neuroplasticity and CNS regeneration will increase, but tissue repair will not occur. However, excessive activity of reactive astrocytes can, in some cases, result in increased tissue damage. Interventions to block such activity must target specific molecular events rather than trying to stop the process itself, and maybe a useful strategy for future therapeutic interventions. Currently, there is no clear scheme to regulate reactive astrocytes. Studying their characteristics in SAE for understanding the regulation of these changes in the rat model allows for further in vivo experimentation and provides a new tool for further understanding of SAE pathogenesis.

This work is partly supported by the University Research Program of Xinjiang Province: XJEDU2018I011.