This is an open access article under the CC BY 4.0 license.

The American Heart Association/American College of Cardiology guidelines define heart failure (HF) as “a complex clinical syndrome that can result from any structural or functional cardiac disorder that impairs the ability of the ventricle to fill or eject blood” [1]. HF is a global epidemic disease; although many treatments for HF have been developed in recent years, the mortality rate remains high [2].

The deaths of cancer survivors are typically attributable to cardiac-related factors [3]. Doxorubicin (DOX) belongs to the anthracycline class of drugs and is widely used in chemotherapy for various cancers, such as stomach cancer, breast cancer, and lung cancer [4, 5]. DOX causes cardiotoxicity as a side effect and is widely used in animal studies to induce HF [6, 7]. Oxidative stress, lipid peroxidation, apoptosis, and autophagy disorders are thought to be major factors associated with DOX-induced cardiotoxicity [7, 8, 9]. HF is an important cause of high mortality, high morbidity, and poor quality of life. However, drugs that can reduce the cardiotoxicity of DOX are lacking.

CoQ10 is a major cofactor involved in oxidative phosphorylation in mitochondria [10]. CoQ10, one of the synthetic antioxidants in the body, was the first drug used to improve mortality related to cardiac disease, reducing deaths by 50% [11]. CoQ10, which exists in oxidized ubiquinone and reduced ubiquinol forms, is produced in various tissues, most commonly the cardiac, kidney, liver, and muscle tissues [12]. CoQ , an intermediate state of CoQ oxidisation “ubisemiquinone”, is also ubiquitous and present in all tissues that have mitochondria [13]. CoQ10 is safe for treating cardiac failure and reducing major adverse cardiovascular events [14]. Furthermore, Khan et al. [15] found that CoQ10 protects the cardiac tissue of apoptotic mice by downregulating apoptosis-related genes. Additionally, CoQ10 relieves cardiac damage caused by hyperlipidemia [16]. It is consistent with the beneficial effects of other natural compounds such as quercetin and ascorbic acid and has great potential as a heart protectant in cancer patients [17]. However, the mechanism by which CoQ10 attenuates DOX-induced cardiotoxicity is unclear.

Six-week-old male C57BL/6 mice were purchased from Liaoning Changsheng biotechnology CO, LTD (Liaoning, China) and mice were allowed to adapt to one week. All mice were randomly divided into four groups as follows: a control group (n = 7), a HF group (n = 7), a CoQ10 group (n = 7), a HF+CoQ10 group (n = 6). Four groups mice were housed in a room under diurnal lighting conditions with a controlled temperature (24 °C). HF group was induced via intraperitoneal injections with DOX (5 mg/kg) once weekly for 4 weeks. CoQ10 was solube in corn oil. The mice of CoQ10 and HF+CoQ10 group were given CoQ10 (100 mg/kg) once a day for 8 weeks [18]. Mice in all groups were fed the appropriate diet for eight weeks. Blood samples were acquired from eyeball blood in serum tubes and stored at –80 °C until use. Heart tissues were fixed in 10% formalin and embedded in paraffin for histological evaluation. The remaining heart tissues were snap-frozen in liquid nitrogen for Real-Time Reverse Transcription Polymerase Chain Reaction (PCR) or Western blot analysis. All animal experiments were performed in accordance with the Guide for the Care and Use of Laboratory Animals and approved by the Ethics Committee of Dalian Municipal Central Hospital.

Blood samples were collected, and serum was prepared by centrifugation at 2500 g for 5 min, after which the supernatant was collected and used for lactate dehydrogenase (LDH) and creatine kinase MB (CK-MB) measurements using commercially available kits according to the manufacturer’s instructions (Nanjing Jiancheng Bioengineering Institute, Nanjing, China).

2.4 Assessment of Apoptosis by TUNEL Staining

The hearts were embedded in paraffin, and serially sectioned to 5 m thickness. The sections were deparaffinized and hydrated in xylene and gradient concentrations of ethanol, and then incubated in proteinase K (37 °C, 22 min) and stained using the Fluorescein TUNEL Cell Apoptosis Detection kit (Servicebio Technology Co., Ltd., Wuhan, China). The images were captured using a fluorescence microscope (Nikon, Japan). Cells that were positive for TUNEL staining and aligned with DAPI staining were considered apoptotic cells and counted.

All data are presented as mean SEM. The statistical analysis was performed using SPSS version 23.0 (SPSS Inc., Chicago, IL, USA). The data was tested for normality. Inter-group variation was measured by one-way analysis of variance and a subsequent Tukey’s test. The minimal level for significance was p 0.05.

The metabolic characteristics of the mice subjected to the different treatments are summarized in Fig. 1. The heart/body weight ratio did not significantly (p 0.05) differ among the four groups (Fig. 1A). Mice in the HF group showed considerably increased serum NT-proBNP, LDH, and CK-MB levels, whereas the levels of these proteins were significantly decreased in the HF+CoQ10 group (p 0.01) (Fig. 1B). Compared with the HF group, the HF+CoQ10 group showed significantly decreased expression of BNP in IHC staining performed to evaluate the expression levels of BNP (p 0.01) (Fig. 1C,D). 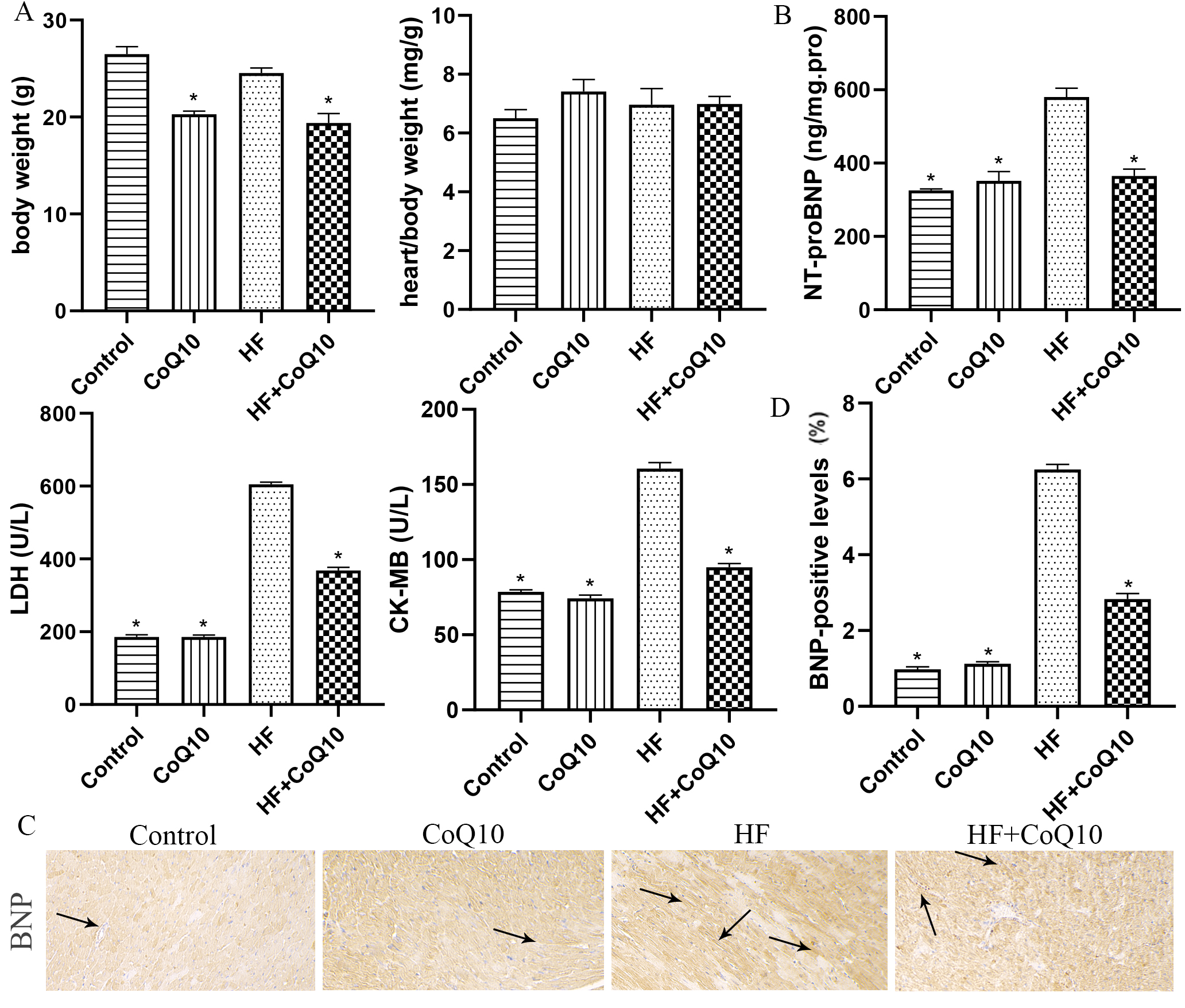 Wheat-germ agglutinin and hematoxylin and eosin staining revealed cardiomyocyte hypertrophy and inflammatory cell infiltration. Compared with the control group, the HF group exhibited myocardial hypertrophy, as evidenced by an increase in the cross-sectional area of cardiomyocytes (Fig. 2B) and inflammatory cell infiltration (Fig. 2A), both of which were attenuated by CoQ10. Western blotting (Fig. 4A,B) and immunohistochemistry (Fig. 4C,D) was performed to evaluate the levels of indicators related to energy metabolism. Compared to in the HF group, the expression levels of PARP-1 and PPAR-were decreased in the HF+CoQ10 group (p 0.05). 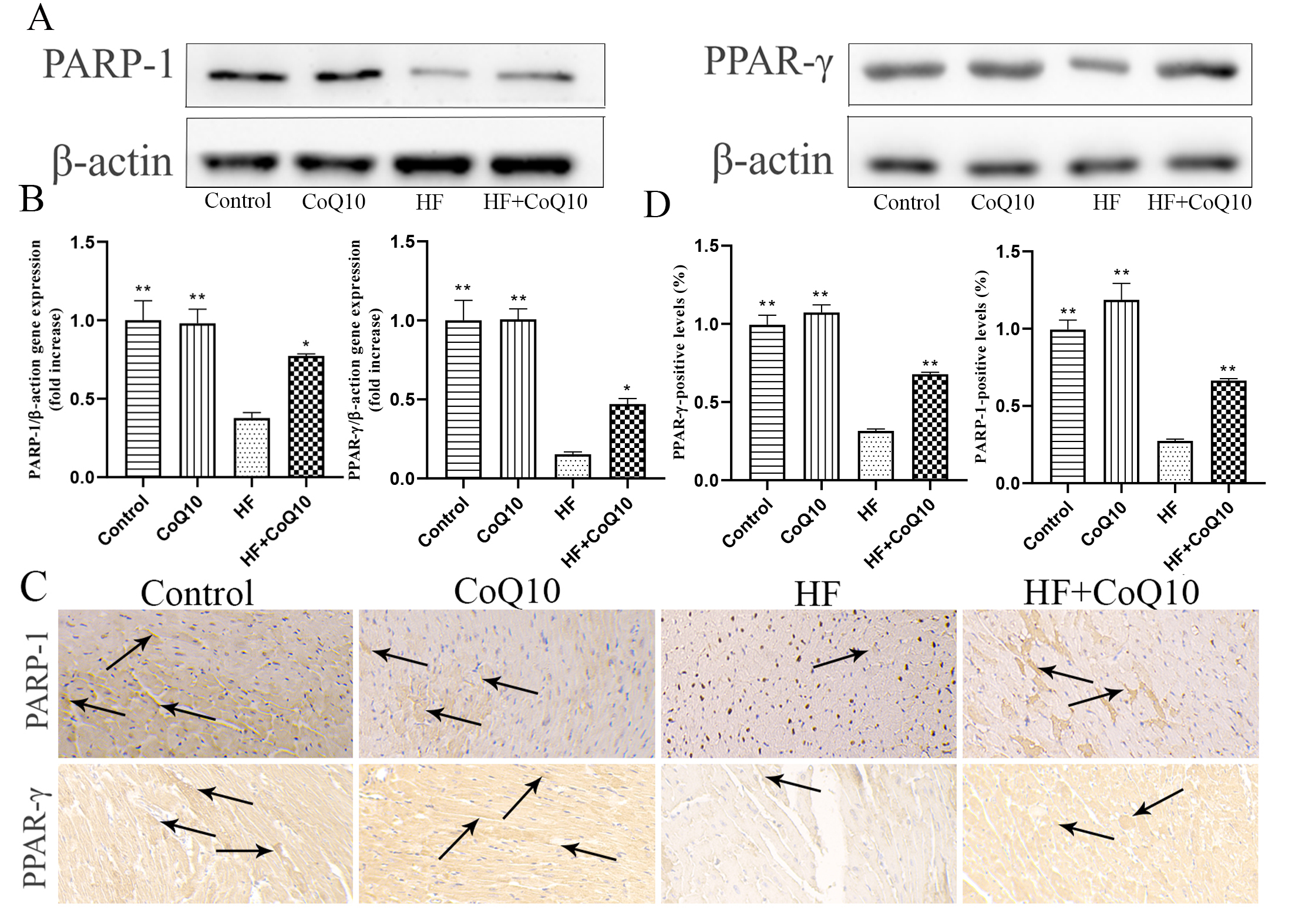 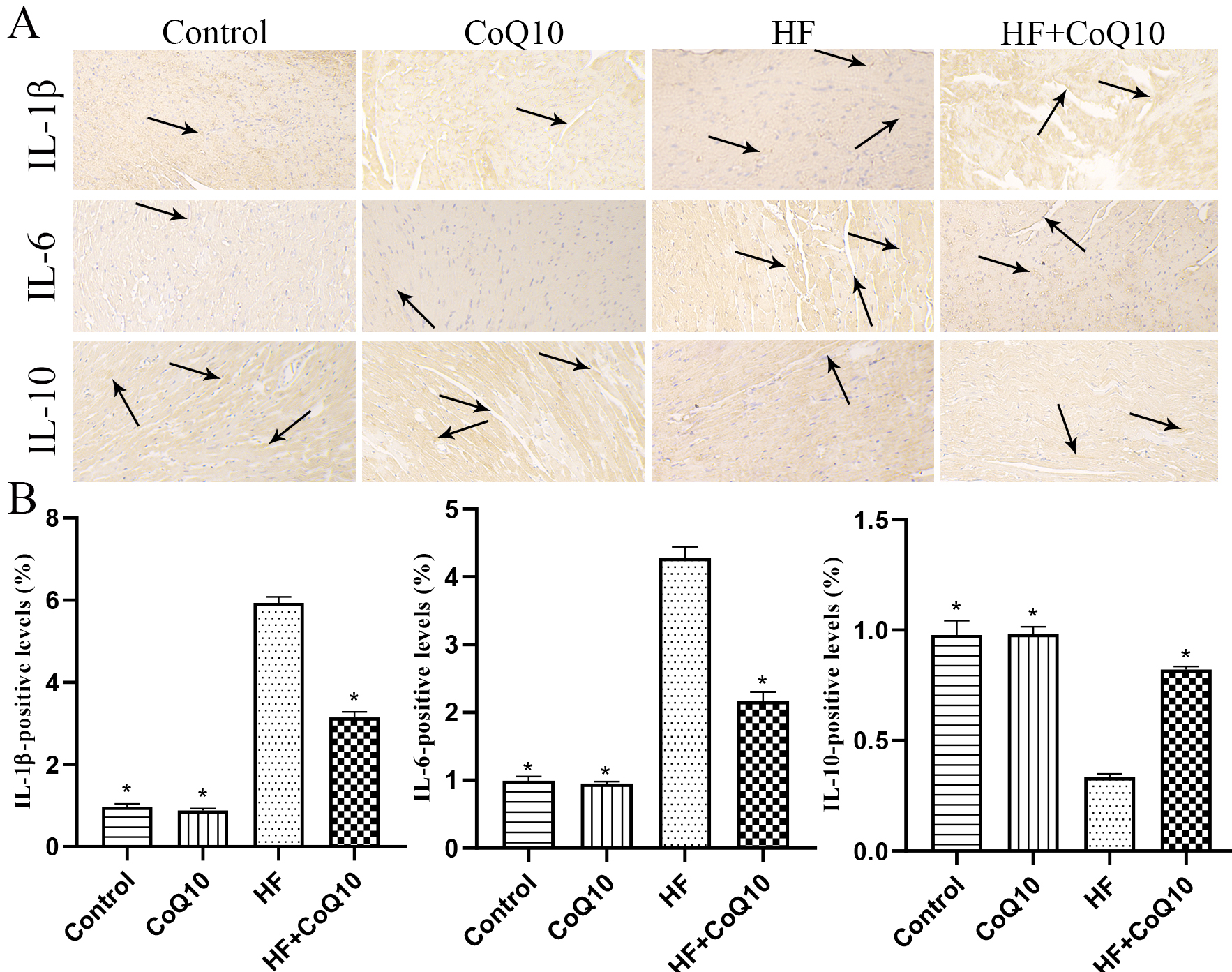 To examine cardiac fibrosis in the mice of different treatment groups, Masson and IHC staining was conducted (Fig. 6). The results revealed increased collagen deposition in the HF group compared with control group (p 0.01) (Fig. 6A). However, the expression of SMAD3 and TGF- was upregulated in the HF group, which was significantly attenuated in the HF+CoQ10 group (p 0.01) (Fig. 6B,C). 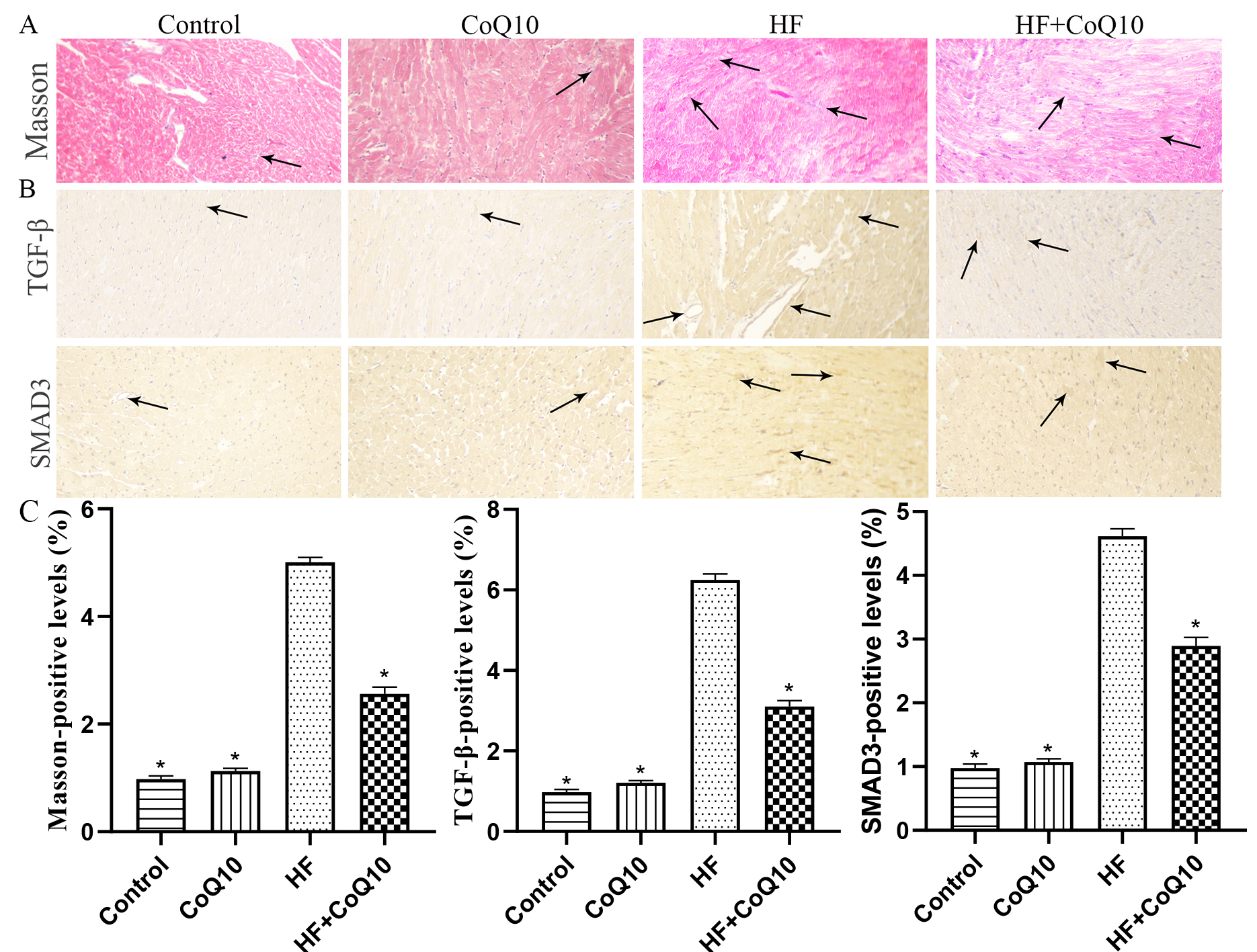 The number of TUNEL-positive cells increased in the hearts of HF group mice compared to in those of control group mice, whereas heart cell apoptosis was reduced in the HF+CoQ10 group (Fig. 7A). Immunoblotting showed that expression of the pro-apoptotic proteins BAK and caspase-8 was significantly increased and that of BCL-XL was decreased in the HF group (p 0.01) (Fig. 7B). CoQ10 treatment reduced the BAK and caspase-8 levels and enhanced the expression of BCL-XL in the HF+CoQ10 group. These results indicate that CoQ10 prevents apoptosis in HF mice. 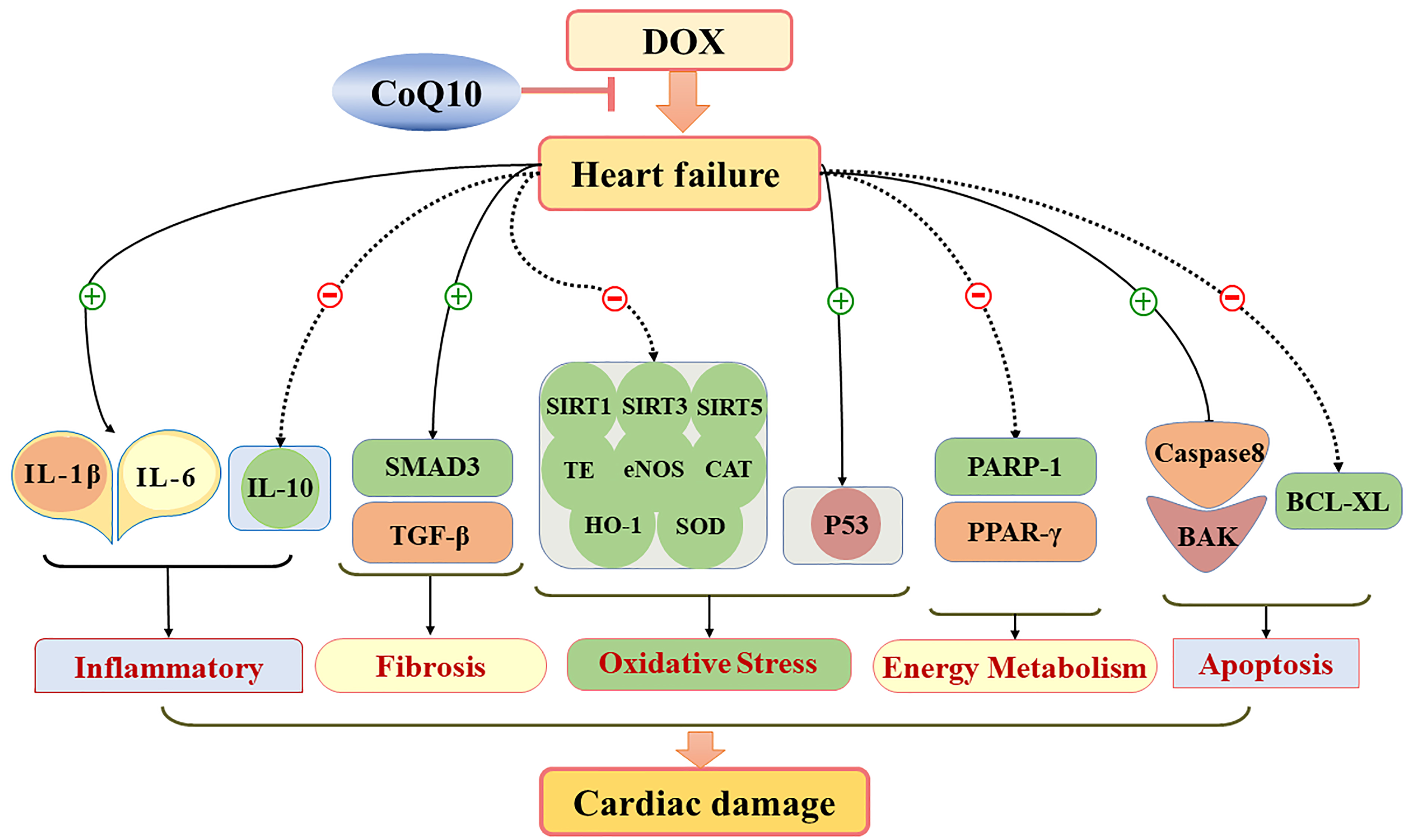 CoQ10 is closely related to cardiovascular disease and plays an important role in protecting against these diseases, such as hypertension, hyperlipidemia, myocardial infarction, and HF [13, 25, 26, 27]. Complementary and integrative medicine (CIM), such as G. lucidum and CoQ10, have a potentially effective role in the treatment of cancer [28]. In addition, CoQ10 influences the effects of adjuvant therapy used for nervous system diseases and tumors [26, 29]. However, the mechanism of the protective effect of CoQ10 on DOX-induced HF is unclear.

Oxidative stress is important in the pathophysiology and pathogenesis of HF and is widely considered a cause of DOX-induced cardiotoxicity [30, 31]. CoQ10 is a cofactor of oxidative phosphorylation in the mitochondria, which are crucial for cellular energy production. Therefore, CoQ10 is closely associated with oxidative stress and has a high antioxidant capacity [13]. SIRT3 is a major mitochondrial deacetylase that participates in antioxidant oxidation by regulating the acetylation of antioxidant enzymes [32]. Previous studies showed that SIRT3 regulates various types of antioxidants. Moreover, a study confirmed that SIRT3 is involved in p53-mediated ferroptosis and that Sirt3 and P53 play key roles in oxidative stress [33]. The endogenous antioxidant HO-1 may be a target molecule for treating antioxidant stress injury in HF [34]. CoQ 10 improved lipid peroxidation by decreasing malondialdehyde levels in human cardiac cells [35]. In the present study, HF downregulated the expression of SIRT3 and HO-1 in myocardial tissues, whereas treatment with CoQ10 increase their expression. The levels of SIRT1, SIRT3, SIRT5, eNOS, TE, CAT, and P53 were significantly downregulated in the HF mouse heart, and these levels were restored by CoQ10.

PPAR- is important in the progression of HF [36]. PARP-1 and PPAR- are transcription factors that promote antioxidant pathways in the endothelium [37]. In the present study, CoQ10 reversed the heart energy metabolism of PARP-1 and PPAR- in HF mice and exerted a protective role in DOX-induced heart injury.

Apoptosis is a form of cell death mediated by caspases. Inhibition of myocardial apoptosis can effectively protect the heart from HF [42]. BAK is an endogenous core regulator of apoptosis [43]. Salehpour et al. [44] reported that CoQ10 reduced apoptosis by regulating BAK and avoiding increased caspase activity. We found that the number of apoptotic cells was significantly increased in HF mice, whereas apoptosis was reduced in the HF+CoQ10 group.

The study has some limitations. First, although CoQ10 has a variety of therapeutic applications, it is not usually prescribed as a drug because of its low oral bioavailability, which can affect its efficacy. Secondly, it should be noted that the concentration of CoQ10 in cardiac tissue on mice was not detected before and after treatment, so complete absorption of CoQ10 was not proved in the study, which is also the focus of future studies.

CoQ10 can alleviate DOX-induced cardiotoxicity, as demonstrated by the downregulation of oxidative stress, fibrosis, inflammation, energy metabolism, and apoptosis markers. These findings suggest that CoQ10 can be used as a therapeutic intervention to reduce the side effects of DOX. We only evaluated control, HF, CoQ10, and HF+CoQ10 groups and did not examine different doses of CoQ10. In addition, we did not validate cultured cells.

All animal experiments were performed in accordance with the Guide for the Care and Use of Laboratory Animals and approved by the Ethics Committee of Dalian Municipal Central Hospital.