This study reports on the effects of sirolimus (in vitro study) and ozanimod (in vivo and in vitro studies) on thymocyte respiration. It details the procedure of measuring thymocyte respiration (including proper sample collection and processing). It also promotes the assay (by applying proper experimental conditions) as a surrogate biomarker for studying the mode-of-action and cytotoxicity of immunosuppressants.

The thymus is a primary tissue for giving rise to self-tolerant effector T cells [1]. This organ is particularly sensitive to environmental (e.g., reactive oxygen species and immunotoxins) and biological (e.g., aging) variables, which could result in ‘thymic involution’. Derangements in such states include a declined output of the naïve T cells and degenerations of the thymic structure [2]. Consequently, the reduction in circulating T cells with age has been linked to susceptibilities to infection, autoimmunity, and neoplasm. Importantly, the use of antioxidants that target mitochondria (the main source of oxidative stress) may delay thymic involution [3].

The term ‘cellular respiration’ infers to the reactions that result in oxygen reduction in cytochrome oxidase, which is the main metabolic pathway that drives ATP synthesis. Thus, mitochondrial respiration provides insight into cellular function on the whole. In this report, we describe the use of our phosphorescence oxygen analyzer to measure cellular mitochondrial respiration in thymic fragments from mice (referred to as, ‘thymocyte respiration’) [4]. This technique was recently used to investigate various animal models of human diseases [5, 6, 7], and it can be applied to investigate the thymus. The method allows measuring the direct effect of compounds, such as immunosuppressants (e.g., sirolimus) on thymocyte respiration [8, 9]. It also allows such measurements after in vivo treatments of animals with a specific immunomodulator (e.g., ozanimod). Both types of experiments are reported in this study as examples.

Previous in vitro studies have shown that sirolimus lowers the rate of cellular respiration [8, 9]. These results support the findings that mTOR controls the flux of nutrients into the mitochondria [10, 11]. Consistently, in vivo treatment with sirolimus results in thymic cortex involution due to apoptosis; this process, however, is reversible [9]. It remains to be seen whether thymocyte respiration can be used in pre-clinical studies as a surrogate biomarker for studying the mode-of-action and cytotoxicity of immunosuppressants.

Ozanimod is a recently approved drug for treatment of multiple sclerosis (U.S. Food and Drug Administration [FDA], 2020) and ulcerative colitis (FDA, 2021) [12]. This potent immunosuppressant is an agonist of the sphingosine 1-phosphate receptors 1 and 5 [13]. These G protein-coupled receptors are targeted by sphingosine-1-phosphate, and are fundamental for modulating immune cells, mainly lymphocyte trafficking from lymphoid tissues [14].

The thymus was quickly removed with a sterile scalpel and immersed in ice-cold phosphate-buffered saline (PBS; 137 mM NaCl, 2.7 mM KCl, 4.3 mM NaHPO, and 1.4 mM KHPO, pH 7.4), 3 M Pd phosphor, and 0.5% fat-free albumin. A thymic fragment (typically, 10 to 20 mg of the outer cortex) was then quickly weighed and immediately placed in the oxygen phosphorescence analyzer (see below); ‘one thymic fragment per mouse per experimental condition’. Mixing was with the aid of parylene-coated stirring bars (Specialty Coating Systems Inc., Japan). Thymocyte respiration was determined at 25 °C in closed glass vials containing 2.0 mL PBS, 3 M Pd phosphor, 0.5% fat-free albumin, and the tested drug or its diluent, as previously described [4, 5, 6, 7]. Experiments were performed with or without the addition of 5.0 mM glucose, as signified in Results. Since it was not possible to remove size-identical fragments, the rate of respiration was adjusted by the sample weight. Nevertheless, the same thymic region was targeted for all experiments.

2.3 In Vivo Treatment with Ozanimod

The previously described (home-made) phosphorescence oxygen analyzer was used to monitor thymocyte respiration [4, 5, 6, 7, 15, 16, 17, 18]. The principle of measurements was based on oxygen quenching the phosphoresce of the Pd phosphor. Briefly, the above listed Pd phosphor (absorption maximum, 625 nm; phosphorescence maximum, 800 nm) was used as an oxygen sensor. The decay rate (1/) of the phosphorescence intensity (I) of this probe was set as: I = Ae [15]. The values of 1/ were linear with dissolved oxygen concentration [O]: 1/ = + k[O], where 1/ = phosphorescence decay rate in the presence of oxygen, = phosphorescence decay rate in the absence of oxygen, and k (sM) = second-order oxygen quenching rate constant [15]. The measurements were performed in sealed glass vials exposed to flashes (600 per min) from a pulsed light-emitting diode array with a peak output at 625 nm. Emitted phosphorescence (at 800 nm) was detected by Hamamatsu photomultiplier tube (type 932). The amplified phosphorescence decay was then digitized at 1.0 MHz by a 20-MHz A/D converter, as previously described [17]. A program was developed using Microsoft Visual Basic 6, Microsoft Access Database 2007, and Universal Library components (Universal Library for Measurements Computing Devices; http://www.mccdaq.com/daq-software/universal-library.aspx). It allowed a direct reading from the PCI-DAS 4020/12 I/O Board (PCI-DAS 4020/12 I/O Board; http://www.mccdaq.com/pci-data-acquisition/PCI-DAS4020-12.aspx). Pulse detection was accomplished by searching for 10 phosphorescence intensities 1.0 volt. Peak detection was accomplished by searching for the highest 10 data points of a pulse and choosing the data point closest to the pulse decay curve [16]. Oxygen concentration decreased linearly with time, reflecting the zero-order kinetics of mitochondrial oxygen consumption. Thus, the respiration rate (k, in M O min) was the negative of the slope d[O]/dt. Cyanide inhibited respiration, confirming O was consumed in the respiratory chain by cytochrome oxidase. Dissolved oxygen in the measuring vials was rapidly depleted by the addition of glucose oxidase (catalyzes: D-glucose + O D-glucono--lactone + HO). The calibration reactions contained PBS with 3 M Pd phosphor, 0.5% fat-free albumin, 50 g/mL glucose oxidase, and various concentrations of -glucose, as previously described [15].

It is worth noting that the high noise at the start of runs (air-saturated solutions) reflects the diminutive phosphorescence that reaches the photomultiplier tube (PMT), as dissolved oxygen quenches the light. By contrast, the low noise at the end of runs (oxygen-depleted solutions) reflects the augmentative phosphorescence that reaches the PMT. It is important, however, to realize that this phenomenon does not affect an accurate determination of the rate when a thymic fragment is present.

Fig. 1 shows a typical experiment involving thymocyte respiration. First, we establish the ‘drift rate’ in the reaction mixture (PBS + albumin + Pd phosphor) without thymic tissue. This ‘noise level’ was 10% of the signal (Panel A). A newly collected thymic fragment (see Methods) was then added, and oxygen consumption was monitored as a function of time. As expected, the rate of thymocyte respiration slowed down, confirming the process was driven by the intracellular nutrients (Panel B, before the addition of glucose). At this point, the addition of glucose provided an external source of metabolic fuel, which established a steady-state rate of thymocyte respiration. These consecutive steps provided an insight into the thymocyte energy conversion (storage) pools. To avoid an irreversible injury from intracellular nutrient depletion (e.g., cell swelling as a result of ATP depletion), glucose must be added when the rate of respiration begins to slow down (see Panel B, after the addition of glucose). The addition of glucose oxidase tested the availability of dissolved oxygen and sets the numerical value of ‘zero oxygen concentration’ (Panel B). Respiration was inhibited by the addition of cyanide, confirming oxygen reduction occurred in cytochrome oxidase (Panel C). 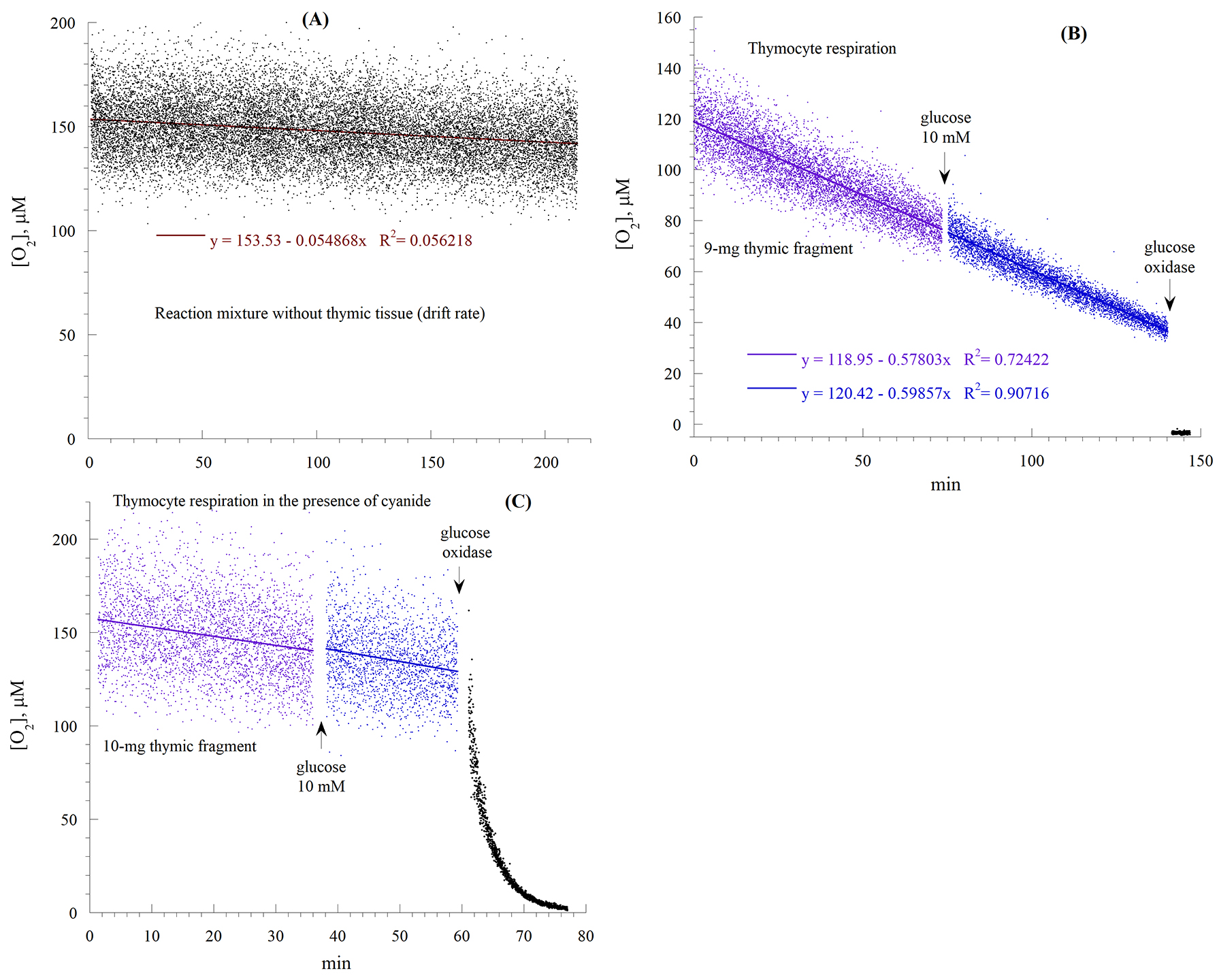 The overall rate of thymocyte respiration (mean SD, in M O min mg) was 0.046 0.011 (median = 0.043, range = 0.028 to 0.062, n = 10). It is important to note the variability of thymocyte respiration, a limitation that prohibited establishing a valid reference range. Therefore, these experiments should be performed in littermates, or in at least age-matched mice. The drug experiments described below were performed in littermates.

3.2 In Vitro Effects of Sirolimus on Thymocyte Respiration 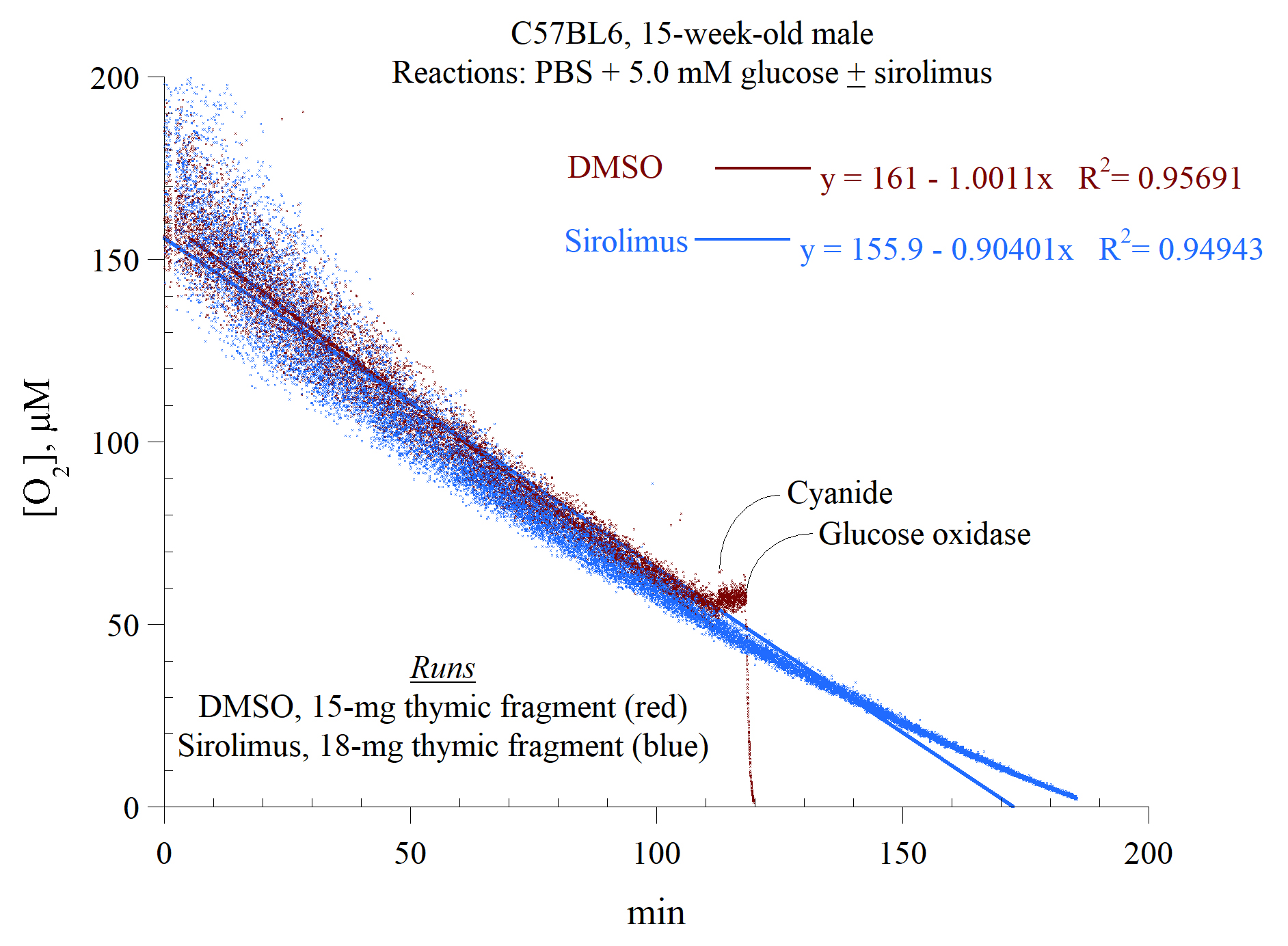 3.3 In Vitro Effects of Ozanimod on Thymocyte Respiration 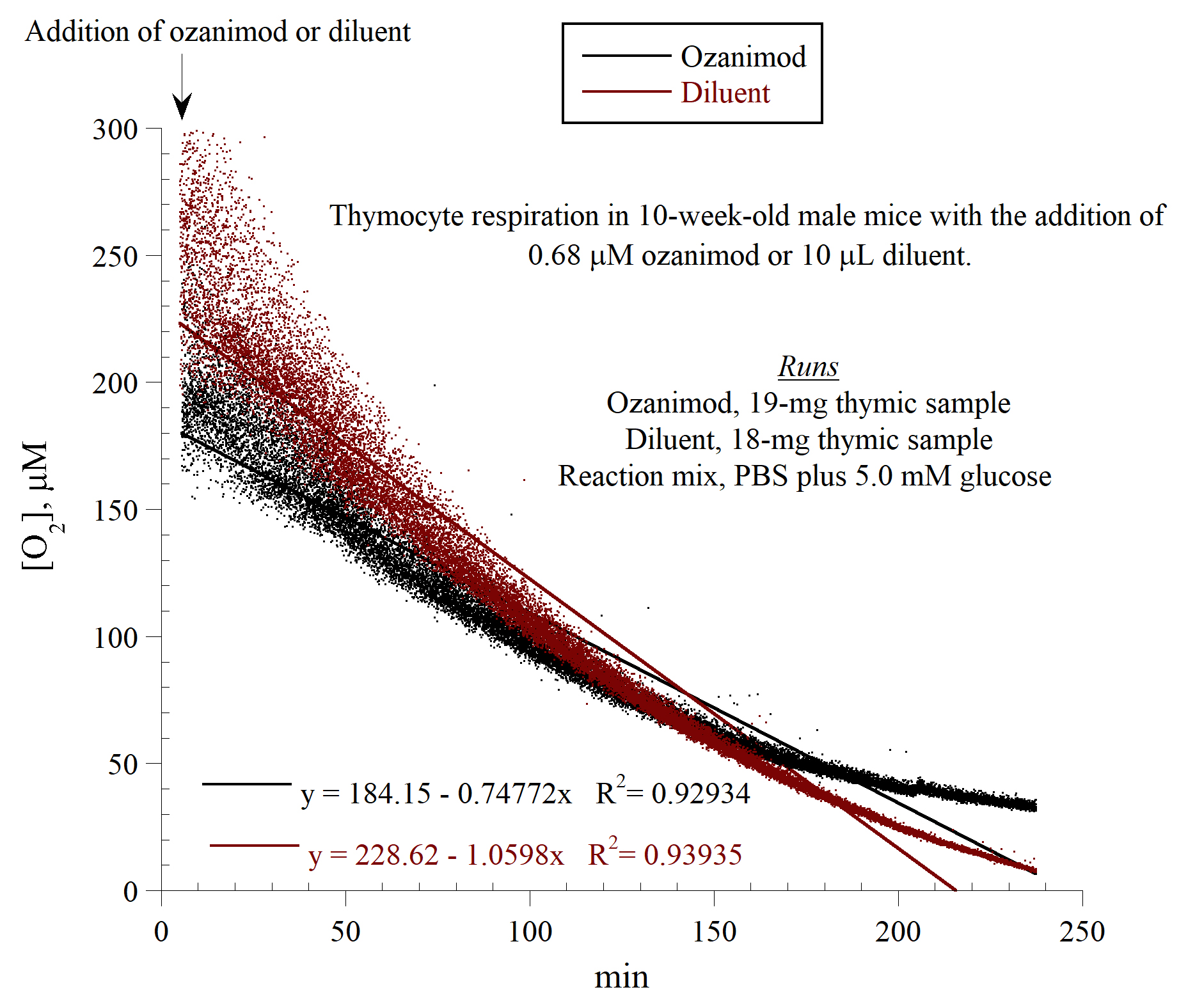 3.4 In Vivo Effects of Ozanimod on Thymocyte Respiration. 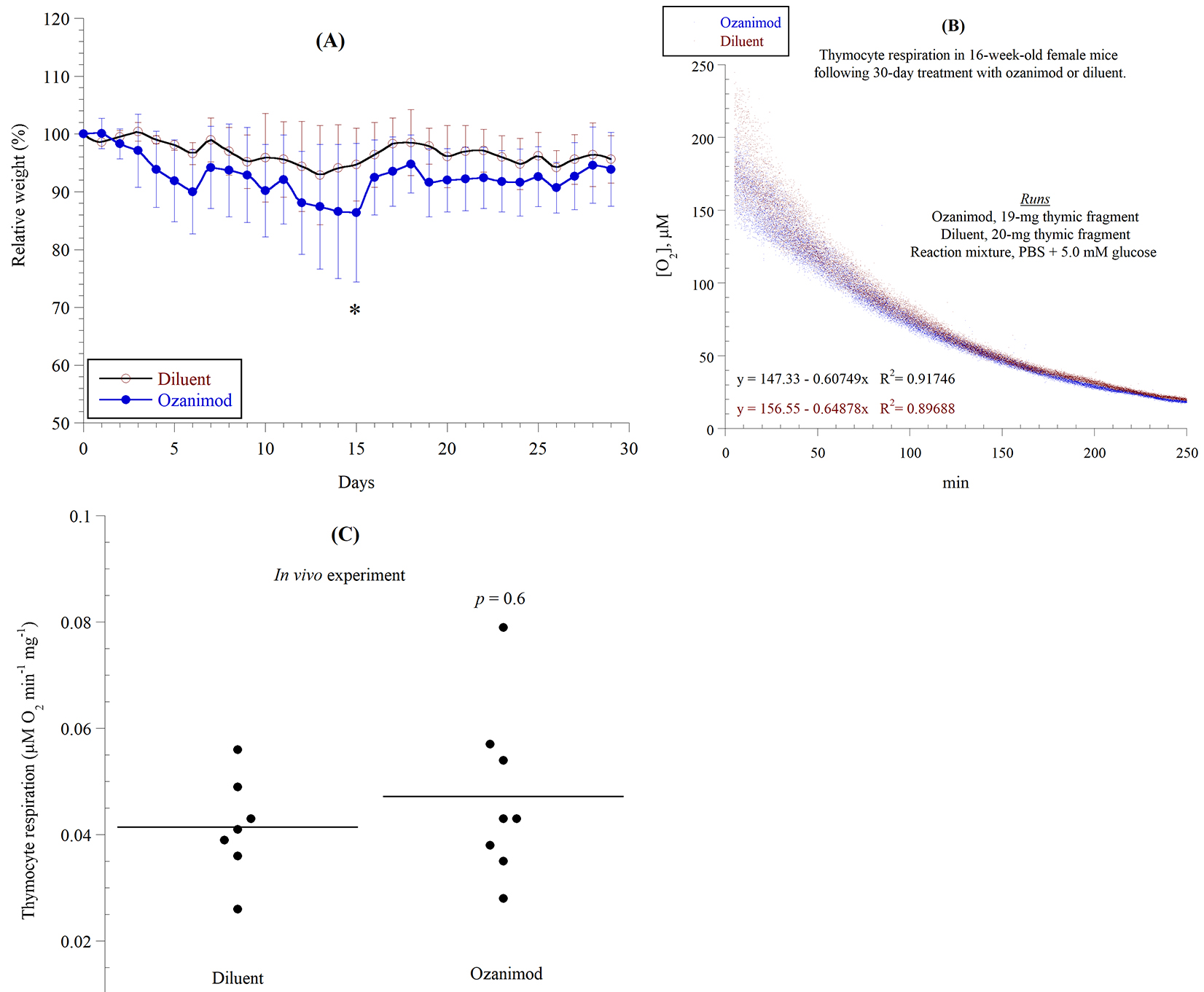 In vivo effects of ozanimod on thymocyte respiration. C57BL6 female mice (16-week-old) were given daily ozanimod (0.6 mg/kg, or 1.36 mmol/kg) by oral gavage for 30 consecutive days. Control mice received the diluent (10 L/g of body weight of ‘5% DMSO, 5% Tween 20, and 90% of 0.1N HCl’). Two separate experiments, each had four mice per group. Panel (A) shows the relative weight change with time (a representative of two separate experiments is shown). Asterisk: One ozanimod-treated mouse died on Day 15 after losing about 29% of the body weight. Panel (B): Representative runs from four separate experiments of thymocyte respiration following the 30-day treatment with ozanimod or diluent. The experimental conditions were as described in the legend to Fig. 1. Panel (C), dot plot summarizing the rats of respiration.

We show here that the phosphorescence oxygen analyzer can be used to monitor thymocyte respiration in the presence of immunotoxins, or following an in vivo treatment with such compounds. This technique has been used previously in various tissues and with various types of compounds [4, 5, 6, 7, 9, 17, 18], but this is the first report of studying the effects of an agonist of the sphingosine 1-phosphate receptors (ozanimod) on the thymus.

In the in vivo study, there was no difference in the rate of thymocyte respiration between ozanimod and its diluent (using 0.57 mol/kg daily for 30 days). In the in vitro study, however, thymocyte respiration was lower in the presence of ozanimod (using a concentration of 0.68 mol/L). These results emphasize the need to perform both in vivo and in vitro studies for screening immunosuppressants. Differences between the two types of experiments could be attributed to several variables, including in vivo drug concentration, distribution, metabolism, and disposition. Therefore, determining the steady state plasma concentration of the drug before collecting thymic fragments for measuring respiratory is important. Variables related to the thymus may also contribute to the differences between in vivo and in vitro studies, such as the capacity of the organ to up-regulate respiration (a compensatory response) in the presence of the drug. Obviously, future studies are needed to delineate these important biological mechanistic questions. As pointed out in Introduction, in vivo treatment with sirolimus results in thymic cortex involution due to apoptosis. Therefore, this drug was used here for comparison. It is also worth noting that this method could be modified to include the use of the protonophore carbonyl cyanide-p-trifluoromethoxyphenylhydrazone (FCCP).

Assessing thymocyte respiration offers an easy functional assay for monitoring vital metabolic pathways. As previously shown, this technique is appropriate for various animal models of immune diseases [5, 6, 7], as well as for chemical compounds (toxins) that affect immunity [9, 17, 18]. Other lymphoid tissues, such as circulating or infiltrating lymphocytes, lymph nodes, and spleen can be studied in a similar way. Importantly, the assay can detect apoptosis, as this process typically activates the mitochondrial cell death pathway [17, 18]. The use of thymocyte cytoprotective agents, such as the thiol compounds (e.g., N-acetylcysteine, sodium methanethiolate, 2-mercaptoethylamine, 2-[(3-aminopropyl)amino]ethanethiol dihydrogen phosphate [WR-2721], and 2-[(3-Aminopropyl)amino]ethanethiol [WR-1065]) can be tested in conjunction with the immunotoxin(s).

It is important to note that the thymus is known to commence an age-related involution, evident by a lower output of T cells [19, 20]. Therefore, selecting the proper age for these studies is crucial. To minimize potential age and gender variations, these experiments should be performed in age-matched mice (preferably littermates). Nevertheless, in a preliminary experiment, the difference between the rate of thymocyte respiration in mice 44 to 77 days of age (n = 7) and mice 133 to 173 days of age (n = 7) was insignificant (p = 1.0).

Currently, the T cell receptor excision circles (TREC, pieces of DNA generated during T-cell receptor gene rearrangements in the thymus) serve as a functional biomarker for thymopoiesis and peripheral T cell homeostasis [21, 22]. TREC measurements can be applied only after an in vivo treatment with immunotoxin(s). Additional limitations of TREC results include its rapid intracellular degradation (disposition) and being diluted by proliferation of peripheral T cells [23]. Nevertheless, the TREC assay can complement the above described measurements of thymocyte respiration.

All data generated or analysed during this study are included in this published article.

A patent application on the development and use of phosphoresce oxygen analyzer is pending (Primary Investigator: Abdul-Kader Souid).