The cerium oxide (nanoceria, NCs) have demonstrated anticancer activities, due to its interesting changes in oxidation states, while it can act similar to the antioxidant enzymes (catalase and superoxide dismutase mimetic activities) [14, 15, 16], subsequently, showing protective attribute as an active scavenger of reactive oxygen/nitrogen species (ROS/RNS) with unlimited cycles that involves changes in oxidation states of Ce/Ce [17, 18]. The strong anticancer function of the NCs can occur via correcting homeostasis in tumor microenvironment and angiogenesis, preventing myofibroblast formation, invasion and tumor growth without any changes in ROS levels, enhancing the immune system, and in some cases, some paradoxical reports explain the genotoxicity and oxidative stress from ROS formation as the determining factors to death of cancer cells [19, 20, 21, 22, 23, 24]. Reports suggest the bioactivity of the NCs are size-, medium-, pH- and time-dependent [25, 26].

The combination of NCs with gold could enhance the anticancer effects of the NCs along with the biocompatibility of the particles [27]. Due to the potential application of gold in different nanoplatforms for the treatment of cancer, as an active agent or a nanocarrier, it can be a good choice to form nanocomposites with NCs [28, 29, 30]. The gold inertness and its nontoxic nature are of great use in the design of new active nanomaterials and nanocomposites for biomedical applications [31, 32, 33, 34]. The factors that can be crucial in determining the final anticancer properties can be the size, shape, and ratio of the components [35, 36]. Gold nanoparticles’ toxicity is directly proportional to the size of nanoparticles. The larger particles are less toxic, and the smaller ones have substantial toxicity towards cancer cells [37, 38, 39, 40]. Therefore, the NC seeds’ size influences the bioactivity of CeO@Au core-shells. The combination of NCs and gold, and even with other metals would be an innovative approach for advancing new nanomaterials with stronger anti-cancer properties.

Herein, the complexation of a phytochemical resveratrol and Ce was occurred because of the oxophilic nature of lanthanide ions. For the first time, the resveratrol and Ce complex was used as a precursor to synthesize NCs by thermal treatment. The prepared NCs were coated with gold and the formation of CeO@Au core-shells was fully investigated by using the conventional characterization methods. The anticancer properties of CeO@Au core-shells and NCs were measured compared with each other to find the effectiveness of the gold core-shells against liver cancer cells.

2. Materials and Methods
2.1 Instruments and Materials

To prepare the nanoceria, 0.012 mol resveratrol and 0.004 mol cerium nitrate hexahydrate (Ce(NO).6HO) were dissolved in 100 mL water separately. The resveratrol was sonicated then stirred vigorously. The cerium ion solution was then added dropwise to the first solution under vigorous stirring. After the addition of cerium ion solution, a milky-like appearance of the mixture confirmed the formation of the resveratrol-cerium complex. Then, the complex was separated using centrifugation and put in an oven at 500 °C overnight (8 h). The prepared nanoceria was used without further purifications. Afterwards, 0.5 g of the as-synthesized nanoceria was dispersed in 2.5 mL of a concentrated solution of Chloroauric acid (HAuCl, 0.2 M). Then, it was centrifuged and washed one time with 10 mL of distilled water (DW) and dispersed again in 10 mL DW. Eventually, a solution of ascorbic acid (100 mL, 1 M) was prepared and dispersed nanoceria was added to this solution dropwise under vigorous stirring. The CeO@Au core-shells were separated and washed several times with DW and applied for characterization and biological tests.

Liver cancer cell line (HepG2) and human foreskin fibroblasts (HFF) were attained from Iran’s Pasteur Institute. Cell developmental was performed in RPMI and DMEM media, supplemented with 100 g/mL penicillin plus 10% FBS, and as a final point transferred to the incubator. In each well of a 96-well plate, cells were seeded, incubated 24 h, and after that the viability of cells was assessed in 24, 48, or 72 h to the biosynthesized NCs at the 0.16, 0.31, 0.63, 1.25, 2.50, 5.00 mg/mL concentrations using MTT assay. The absorption bands of FTIR between 3200–3500 cm were associated with the hydroxyl groups of the capped ascorbic acid and possibly on the surface of CeO (Fig. 2) [41, 42, 43]. The bands at 3100–2840 cm can be related to the C–H stretching of ascorbic acid. Ascorbic acid usually shows at absorption signal at 1750–1760, specifically assigned to the carbonyl stretching of the -lactone ring in the ascorbic acid. The band absence after reduction of gold nanoparticle and bounding to the surface of nanoparticle could prove CeO@Au core-shells coated by ascorbic acid [44]. The bands corresponded to C–H bending of the methyl group and carbonate species after calcination was appeared at 1454 and 1385 cm, respectively. The bands at 1132 and 1002 were also associated with the C–O stretching of the –OH group of the alcohol. The band observed at 500 cm can also be assigned to the Ce–O vibration [45]. 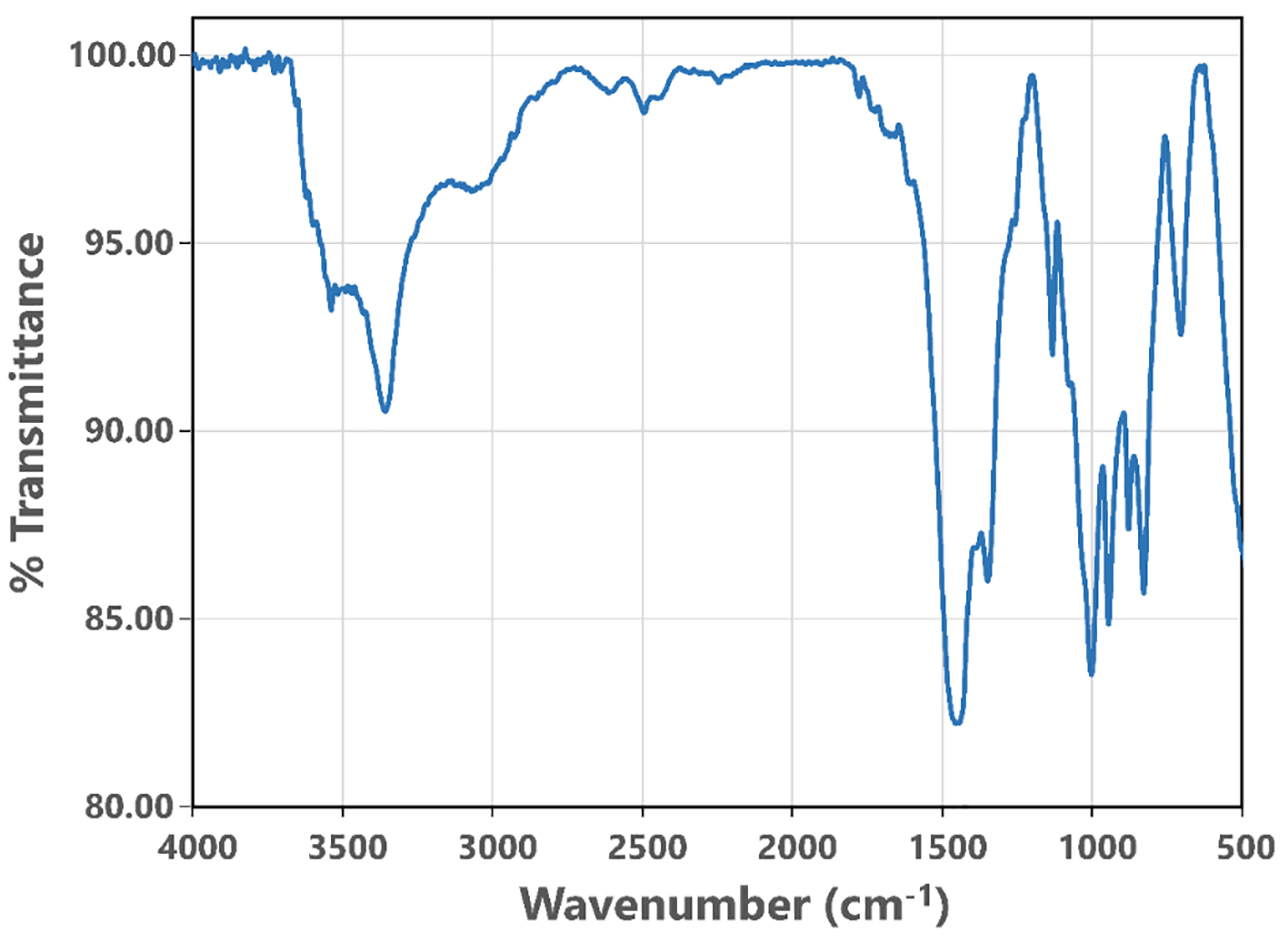 The TEM analysis was performed to determine the size of CeO@Au core-shells in the solid phase. As shown in Fig. 3, the TEM images have revealed spherical, semi-spherical, and oval morphologies with particles sizes in the range of 20–170 nm. The images revealed that the appearance of larger sizes could possibly be due to the agglomeration of the several particles. The TEM images of CeO@Au core-shells. The particles sizes are in the range of 20–170 nm.

The hydrodynamic size and the partial surface charge of the particles were measured using the DLS and potential analyzer (Fig. 4). The analyses revealed the z-average of 229 nm, where nearly 50 and 90% of the particles showed particle sizes under 282 and 468 nm in order, respectively. The particle size according to intensity and number of size dispersion was 262 and 115 nm, respectively, whereas the partial surface charge was –24 mV. The analyses demonstrated that the information obtained from solid-phase sizes and the hydrodynamic sizes were compatible and acceptable. The PXRD and FTIR also confirmed the synthesis of the nanoparticles. The TEM images further indicated an aura around the particles that could be attributed to the formation of a gold layer around the nanoceria particles.

Nanotechnology-mediated delivery can be employed as a beneficial device in increasing the bioavailability of resveratrol. Nanoscience is an emerging part of investigation that operates at the crossways of biology, physico-chemicals, engineering, pharmacology, and medicine [22, 46, 47, 48]. Designing of NPs (nano particles) for an effective and controlled delivery of anticancer factors is being considered as one of the most important applications of nanoscience [24, 49, 50]. Few experiments have attempted to study potency of resveratrol for the synthesis of nanoparticles. It has been shown that the solid lipid NPs loaded with resveratrol can cross the cell membrane, while it can be enhanced via increasing the exposure time of cells to resveratrol [51]. Another study utilizing bovine serum albumin-bound resveratrol NPs in primary ovarian cancer of mice showed that not only the NP-bound resveratrol was easier to work with because of the improved solubility, it had also a greater influence on prevent of tumor growth, compared to pure resveratrol [52]. The anti-cancer effect of gold nanoparticles against breast, testicular, liver, and lung cancer cells has been proven in a concentration-dependent manner [30, 51, 52, 53, 54, 55]. In another study, the produced gold nanoparticles provided a safe and great system for the delivery of gapmers in cancerous cells, which meaningfully down-regulated mutant p53 proteins and changed molecular markers related to cell growth and apoptosis [56].

The anticancer activity of the produced NC was remarkable, whereas it possessed lower toxic effect on normal cells. The results clearly exhibited the toxicity of NC against cancer cells in a concentration and time dependent manner (Fig. 5). Although resveratrol alone was effective against cancer cells, higher efficacy in toxicity against cancer cell lines was observed in combination with nanoparticles. Cellular toxicity effect of biosynthesized NCs and resveratrol against HepG2 as a cancerous cell lines (B and D) and HFF as a normal cell lines (A and C).

The nanoceria particles were successfully synthesized using resveratrol to form complexes as a precursor for further calcination procedure. The synthesized nanoceria was also coated with a gold layer to increase their anticancer efficiency. The prepared nanoceria were fully characterized and analyzed through conventional methods. The experiment has shown the particle size of 20–170 nm in the solid phase with the z-average hydrodynamic size of 229 nm. The present study indicated the successful synthesis of CeO@Au core-shells. The anticancer results demonstrated that resveratrol-mediated synthesized NCs have significant cellular toxicity properties against HepG2 and could be utilized in hepatocarcinoma therapy. Further in vivo investigations will significantly help to the anti-cancer and safety effects of fabricated nanocomposites.

The authors are warmly grateful to the Mashhad University of Medical Sciences for support and kindly providing facilities to perform the experiments.

The authors declare no conflict of interest. MI is serving as one of the Editorial Board and Guest Editor of this journal. We declare that MI had no involvement in the peer review of this article and has no access to information regarding its peer review.Full responsibility for the editorial process for this article was delegated to GP.