Gastric cancer (GC), the fourth most common malignancy worldwide, is still the second-leading cause of cancer death globally especially in East Asia (1-3). Despite advances in diagnostic, surgical techniques for its removal, and moleculary targeted drugs, the 5-year overall survival rate of patients with GC is still very low due to the unclarified molecular mechanisms underlying GC tumorigenesis and its progression (1). Therefore, investigations at the molecular level to better understand the underlying mechanism of oncogenesis are indispensable for improving diagnosis, prognosis, and treatment of this form of cancer.

In this study, we report that ITGBL1 expression is frequently elevated in GC and such an increased expression correlates with shorter overall survival (OS). ITGBL1 overexpression promotes GC cell proliferation and invasion via activation of Akt pathway, whereas its knockdown inhibits cancer growth. These results indicate that ITGBL1 may be a promising therapeutic target for GC.

The study was approved by the ethics committee of Taian City Central Hospital and informed consent was obtained from all patients following the Declaration of Helsinki.

GC samples were obtained from 54 patients without receiving radiotherapy and chemotherapy before surgery. These samples were then fixed by formaldehyde and embedded in paraffin for tissue chips. The protocols of immunohistochemical staining scoring were described in the previous paper (11).

Tissue or cellular total protein was extracted with lysis buffer (P0028, Beyotime) according to the manufacturer’s protocol. Protein samples were separated by 10% SDS-PAGE and transferred onto nitrocellulose membranes. The membranes were then exposed to primary and secondary antibodies. The following antibodies were used in this study: ITGBL1 (1:1000, Sigma-Aldrich), β-actin (1:1000, Santa Cruz), Akt (1:2000, CST, USA), pAkt (1:2000, CST, USA). Bound antibodies were visualized with the ECL kit (Thermo Scientific).

Two ITGBL1 shRNAs and one control shRNA were obtained from Gene Pharma (Shanghai, China) for generating stable silenced ITGBL1 cell lines. To express ITGBL1 ectopically, vectors containing the ORF of ITGBL1 were obtained from Genecopoeia. Retroviral production and infection were performed as described previously (10). The alterations in ITGBL1 expression were testified by western blots before further use.

Cells were seeded in 96-well plates in triplicate at the initial density of 2 × 103cells/well with 100 μl culture medium and cultured at 370, 5% CO2. At various time points, groups of cells were incubated with 10 μl of cell counting kit (CCK-8, Dojindo, Japan). The absorbance values were measured at 450 nm using Power Wave XS microplate reader (BIO-TEK, USA).

Cells were plated in 6-well plates (500 cells per plate), cultured for 14 days at 370 C, 5% CO2, then fixed with formaldehyde and stained with 1% crystal violet before counting the number of colonies.

Collected cells were centrifuged, fixed overnight using cold 75% alcohol and incubated in 500 µl of staining buffer containing 25 µl of PI and 10 µl of RNase A for 30 min. The fluorescence was analyzed by flow cytometry. Data were collected and calculated using the FlowJo software. The cell numbers were counted in each cell cycle phase.

Transwell chambers (Corning, USA) were used for invasion assays. Indicated cells were cultured in serum-free culture medium overnight, and then 5×104 cells in 100 μl of serum-free medium were seeded into the upper chamber, and 500 μl medium with 10% FBS was added to the lower chamber. After 24 hours of incubation, we removed unpassed cells and then stained the membranes with 0.1% crystal violet for 30 min. The stained cells were counted in 5 randomly selected fields under microscope. The experiment was performed twice with each sample in triplicate.

All values are presented as the mean ± standard error and the number of lesions with the percentage. Student’s t-test is used to compare the measured results while paired t-test is used to compare the expression of ITGBL1 in paired GC tissues and matched normal tissues. Kaplan-Meier survival curve analysis was performed by GraphPad (version 6.0, USA) to detect the relationship between the expression of ITGBL1 and Overall survival (OS) All statistical procedures were conducted using the statistical software SPSS for Windows (version 16.0; SPSS, Chicago, USA). P < 0.05 was regarded as a statistically significant difference for comparisons between groups.

4. RESULTS
4.1. Upregulation of ITGBL1 is associated with poor prognosis in GC patients

To elucidate the biological role of ITGBL1 in GC, we analyzed the original TCGA GC data by GEPIA (gepia.cancer-pku.cn) (12). We found that ITGBL1 was highly expressed in GC (STAD, Stomach adenocarcinoma) compared with the non-cancerous gastric tissues (P < 0.05, Figure 1A). We also confirmed the increased expression in 51 patient samples at RNA and protein levels as compared with adjacent non-tumorous tissues (Figure1C-E). As compared to the expression of ITGBL1 in normal gastric endothelium cell line (GES-1) its expression was increased in gastric cancer ell line (Figure1F, Figure1G). 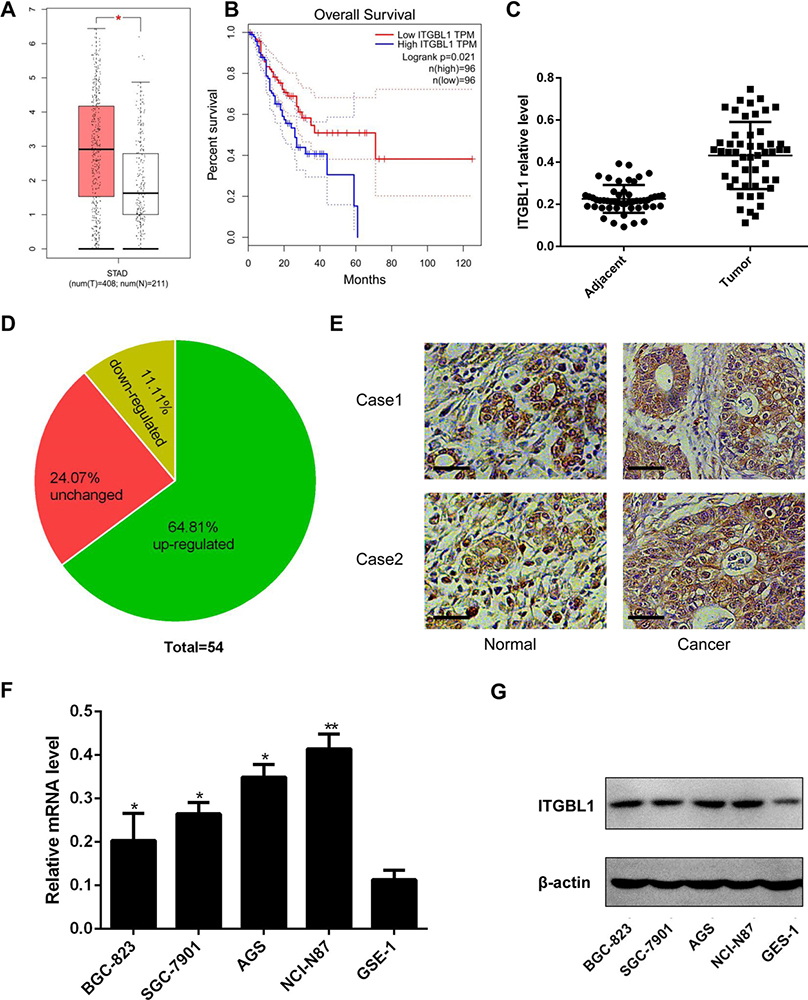 Next, we investigated the relationship between ITGBL1 and the clinical parameters of GC and found that there a is significantly negative correlation (Log-rank test) between the expression of ITGBL1 and overall survival (OS) (P = 0.021) (Figure 1B). These results indicate that ITGBL1 is overexpressed in GC and that such elevated expression is correlated with a poor prognosis.

To further understand the role of ITGBL1 in tumor progression of GC, we stably silenced ITGBL1 in AGS and N87 cell lines (Figure 2A). Knocking down of ITGBL1 decreased cell growth, clone formation and in vitro invasion (Figure2B-F). To further elucidate the mechanism of growth inhibition, cell cycle analysis was performed. ITGBL1 silencing significantly changed phase distributions: a higher percentage were at G0/1 phase whereas a lower percentage of cells were in S phase. Taking together, silencing ITGBL1 significantly inhibits GC cell proliferation and invasion by inducing cell cycle arrest at G0/1 phase. To confirm the biological functions of ITGBL1 in GC cells, we then ectopically expressed ITGBL1 in SGC-7901 cells as illustrated in Figure 3A. The ectopic expression of ITGBL1 significantly promoted SGC-7901 cell proliferation, clone formation and in vitro invasion (Figure 3B-E). Moreover, cell cycle analysis showed that overexpressed ITGBL1 increased the ratio of cells in S phase (Figure 3F). All these results from SGC-7901F cells strongly supported the findings that ITGBL1 promotes GC cell proliferation and invasion by affecting cell cycle phase distribution. 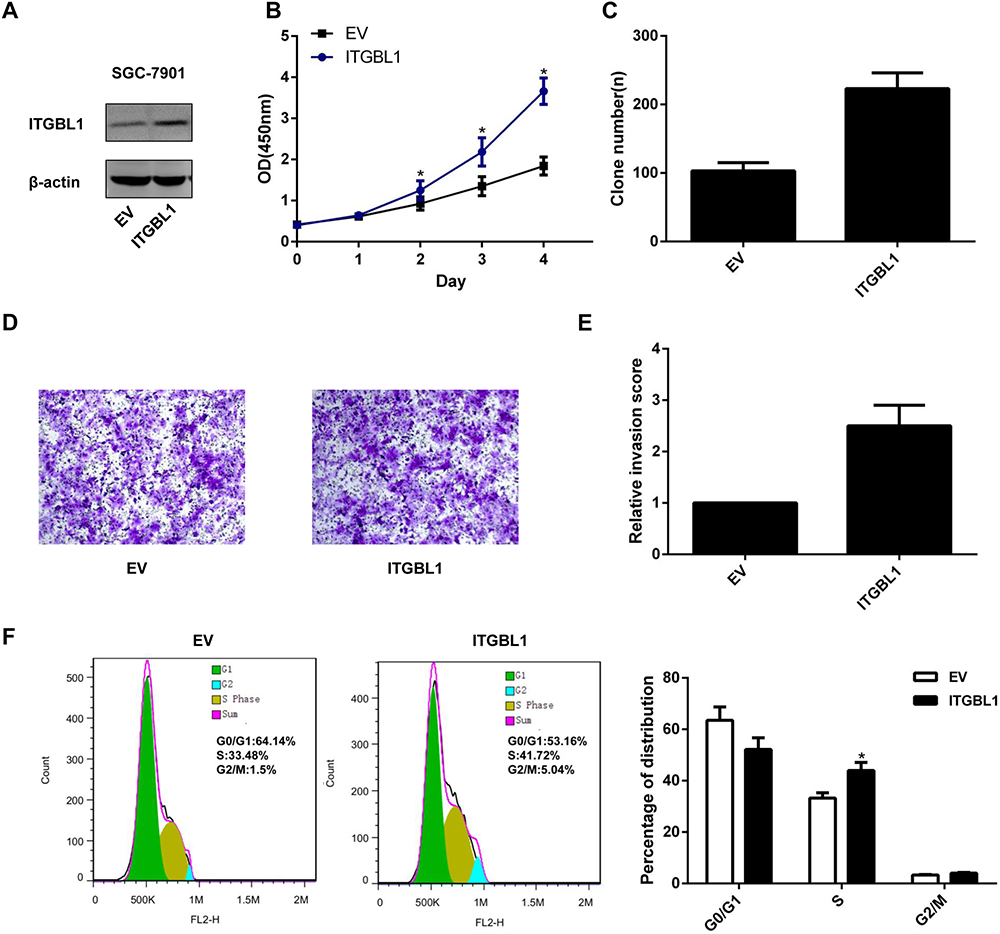 Based on our previous data in which ITGBL1 induced S phase arrest and proliferation, we determined the expression of genes involved in these cellular processes, including NF-kB, JAK-STAT , Akt and mTOR pathway-associated proteins. We found that there was no correlation between the expression of ITGBL1 and the level of NF-kB, JAK-STAT and mTOR pathway-associated proteins (Figure 4). 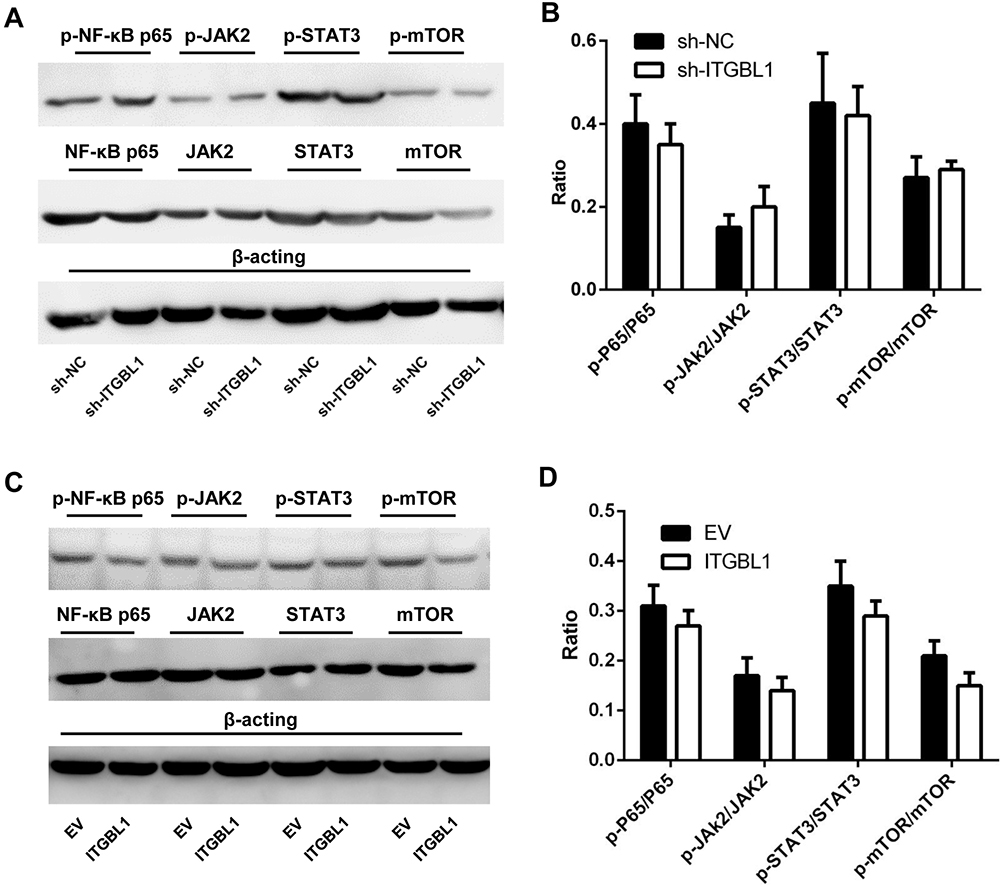 Akt signal pathway has been considered to play an important role in tumorigenesis of various cancers (13). It has been reported that Akt is overexpressed in gastric cancer and that such increased expression is associated with enhanced cell proliferation (14). We further explored whether ITGBL1 regulates cell proliferation by activation of Akt signaling. Figure 5A, shows that silencing ITGBL1 significantly inhibited phosphorylation of Akt in AGS/ITGBL1-shRNA and N87/ITGBL1-shRNA cells, while upregulation ofITGBL1 promoted phosphorylation of Akt in SGC7901/ITGBL1 cells (Figure 5B). Therefore, ITGBL1 may act as an upstream molecule of the Akt pathway. Next, we investigated whether ITGBL1 could activate the Akt pathway to regulate cell proliferation, by treating SGC7901/ITGBL1 cells with an Akt inhibitor (MK-2206 2HCl) (5 μM). Cell proliferation assays indicated that Akt inhibitor, MK-2206 could partially rescue ITGBL1 induced cell proliferation (Figure 5C). These results were further validated by another Akt inhibitor (AZD5362l) (300 nM) (Figure 5D). In conclusion, ITGBL1 plays an oncogenic role and can regulate cell proliferation and invasion via Akt signal pathway in GC. ITGBL1 regulates Akt/pAkt signaling in GC cell lines. A. Western blot revealed that depletion of ITGBL1 inhibits phosphorylation of Akt and decreases the ration of pAkt in AGS and N87 cells. B. overexpression of ITGBL1 promoted the phosphorylation of Akt and increased the ration of pAKT in SGC-7901 cell line. C, D. Akt inhibitor MK-2206 2HCl rescues the promotive effects in SGC-7901 overexpression stable cell lines which was confirmed by another Akt inhibitor, AZD5363. All experiments were performed in triplicate. 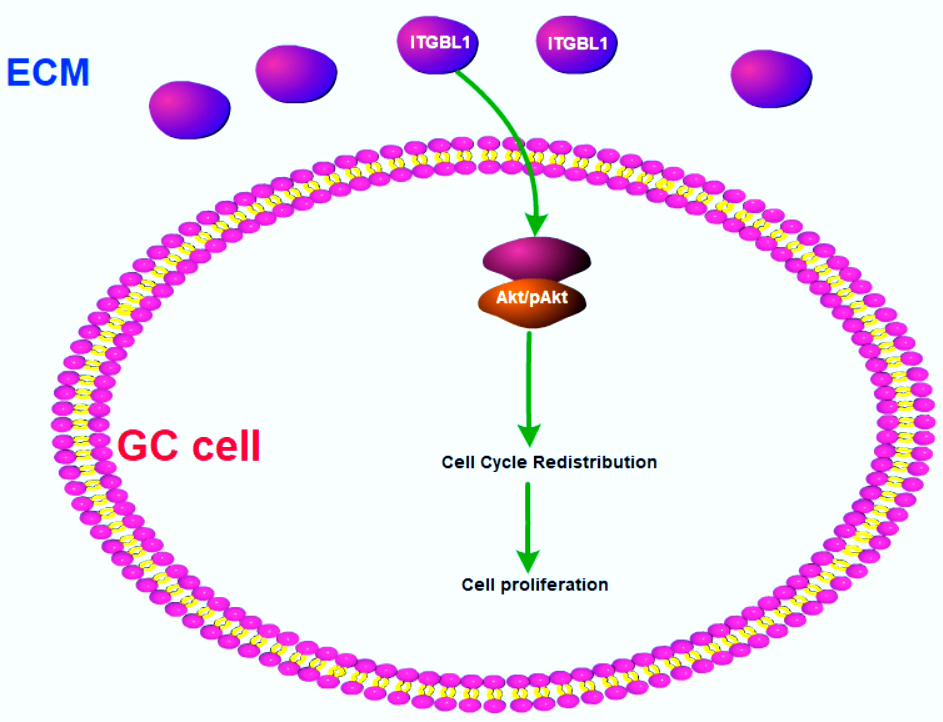 A schematic diagram illustrating the effects of ITGBL1 on GC cells proliferation.

Abnormal extracellular matrix (ECM) dynamics leads to irregular cell proliferation and invasion, reduces cell death, leads to loss of cell differentiation, and results in congenital defects and pathological processes including cancer (16, 17). Accumulating evidence have demonstrated that various extracellular matrix proteins play a vital role in ECM-cell interaction by activating several signal pathways, for example, Wnt/PCP, FAK/SRC, or Akt, ERK1/2 (5, 18, 19). ITGBL1, as an extracellular matrix protein, can activate several signalling pathways that are conducive to its tumor-promoting properties (8-10). Akt is a serine/threonine kinase that is activated downstream of integrins which act as receptors for various proliferative and bioactive substances as well as extracellular matrix components. Activation of Akt usually contributes to tumorigenesis by regulating cell motility, which is essential for local invasion and metastasis in GC (14, 20). Thus, we hypothesized that ITGBL1 modulates Akt/pAkt signalling pathway, and that by virtue of such an effect regulates GC proliferation. Indeed, ITGBL1 knockdown suppresses phosphorylation of Akt, inhibits growth and invasion in vitro, whereas reverse phenomenon is observed by ectopic expression of ITGBL1. Moreover, MK-2206 which is aspecific Akt inhibitor partially rescues GC cell proliferation caused by highly expressed ITGBL1, indicating that Akt/pAkt pathway is involved in modulating ITGBL1 function in GC, and confirmed by another Akt inhibitor (AZD5363). The data show that ITGBL1, regulates GC cell proliferation and invasion likely by its action by acting on its downstream Akt signaling.

We acknowledge that participation of all authors in conducting the experiments and constructive comments on the writing of this manuscript.