Chronic kidney disease (CKD) is a life-threatening condition characterized by irreversible and progressive loss of kidney functions due to loss of renal units and replacement by extracellular matrix (ECM), which ultimately leading to fibrogenesis and renal scarring (1, 2). Transforming growth factor-beta 1 (TGF-beta 1) is a crucial factor that drives fibrosis in various forms of human CKDs (3-5). Specifically, TGF-beta 1 has been shown profibrogenic effect in CKDs by activating downstream Smad signaling in both experimental animal models and human kidney diseases (6, 7). Additionally, TGF-beta 1 displays profibrogenic-like effects in vitro by promoting ECM synthesis and inhibiting ECM degradation, as shown in mTECs and NRK-49F cells (8, 9).

Notch is a highly conserved key regulator of cell differentiation, specification, and tissue patterning. In mammals, there are 5 canonical ligands (Jagged 1, Jagged 2, Delta-like ligand 1, 3, and 4) and 4 Notch receptors (Notch1-4) in mammals. All the ligands and receptors are type I single-pass transmembrane receptor proteins (10, 11). Notch signaling is diminished in normal healthy adult kidney but induced in chronic and acute kidney injuries (12). Moreover, increased glomerular epithelial Notch signaling has been closely associated with glomerulosclerosis, albuminuria and other chronic kidney disease, and the severity of fibrosis is closely correlated with Notch1 activation in the tubulointerstitium (13-15).

TMEM45A (also known as DNAPTP4, FLJ10134 or DERP7) is a multi-pass membrane protein that belongs to a large family encoding predicted transmembrane (TMEM) proteins. Previously, it was shown that TMEM45A was highly associated with epidermal keratinization (16). In addition, TMEM45A knockdown by siRNA resulted in reduced expression of matrix metalloproteinases such as MMP2 and MMP9 (17), which were associated with ECM degradation (18, 19). These findings suggest that TMEM45A is a potential regulator of ECM. However, very little is known regarding the regulatory effects of TMEM45A in this field, and the precise molecular mechanism remains unclear. In this study, surgically-induced renal fibrotic rat was generated via 5/6 nephrectomy (5/6 Nx) and used as a model to examine the expression and role of TMEM45A in renal fibrosis (20). Moreover, the regulatory functions of TMEM45A were investigated in NRK-49F cells in vitro.

3. MATERIAL AND METHODS
3.1. Chemicals and reagents

NRK-49F cells were obtained from the SIBCB (Shanghai Institute of Biochemistry and Cell Biology, Chinese Academy of Sciences, Shanghai, China). NRK-49F cells were incubated in DMEM with 10% FBS and penicillin (100 U/ml) (37 °C with 5% CO2) to exponential phase. Cells were then seeded into 6 well culture-plates (5×105 per well) and used for later experiments when the cell density reached over 50%.

Six-week-old male Wistar rats (170 ± 20 g) were provided by the Shanghai Animal Lab Center (Shanghai, China). All animals were kept in plastic cages with free access to standard commercial rodent diet and water, in a room with controlled temperature (24 – 26 °C) and on a 12-h light/12-h dark cycle.

We used the experimental model of 5/6 nephrectomy or the remnant kidney model for generation of fibrosis in the kidney. The reduction of renal mass was achieved by surgical excision of both poles, with removal of the contralateral kidney (20). After one week of the adaptive feeding, a total of 24 rats were randomly divided into 2 groups (n = 12): control group and 5/6 (model) group. For the first step, rats were anaesthetized and two poles of the left kidney were cut out. One week later, the right kidney was removed. In addition, sham operations were carried out in the control group.

Rats were sacrificed at 4 and 8 week after operation (6 rats each group at each time point) and samples were collected. Serum creatinine, total urinary protein and BUN concentration were detected to evaluating the renal function. Relative mRNA expression and protein levels of TMEM45A and Notch1 were also examined.

3.4. Experimental groups
3.4.1. Effects of different concentrations of TGF-beta 1 on mRNA and protein expression of TMEM45A and Notch1 in NRK-49F cells

NRK-49F cells were divided into 4 groups: EPC group, TMEM45A OE group, EPC + DAPT group and TMEM45A OE + DAPT group. Viral supernatants and DAPT (20 μM) were added into cells correspondingly and cells were cultured for 48 h in DMEM with 10% FBS at 37 °C with 5% CO2. Hydroxyproline concentration and CTGF, FN, Notch-l and Jagged-l protein levels were measured at the end of experiments.

Relative contents of serum creatinine, total urinary protein and BUN were determined using colorimetric method according to the manufacturer’s protocol.

3.7. Determination of hydroxyproline, Col -I, Col-III, TNF-alpha and IL-6

Cell samples were centrifuged at 12,000 × g for 5 min at 4 °C to obtain the cells. The total protein of each sample was determined by BCA method. Equal volumes of hydrolytic reagent was added and boiled for 20 min. After cooling to room temperature, samples were adjusted to pH 6.6 - 6.8 with phosphoric acid (or NaOH) and treated with activated carbons to decolorize for 30 min. Samples were then centrifuged at 12,000 × g for 15 min. The absorbance of supernatant fraction (1 mL for each sample) was determined at 550 nm using an automatic biochemistry analyzer (HITACHI 7170S, Japan). Finally, using standard curve, the concentration of hydroxyproline was calculated. IL-6, TNF-alpha, Col-I and Col-III contentsin NRK-49F cells were determined using ELISA assay kits according to the manufacturer’s protocol.

Protein lysates (35 μg) from the renal tissues and cultured cells was extracted. After the standent operation of loading to SDS-PAGE and transferred onto nitrocellulose membranes, which were subsequently blocked in 5% non-fat milk for 1 h at room temperature followed by incubation with primary antibodies overnight at 4 °C. After washing, membranes were incubation with HRP-conjugated secondary antibodies. Relative protein ratios were determined and normalized to GAPDH.

Data obtained from this study were expressed as mean ± SD. Statistical data analyses were carried out by Student's t-test and ANOVA on SPSS 20.0 software (SPSS Inc., USA).

According to a previous report, glomerulosclerosis occurred at 8 weeks after operation and the untreated control group showed progression with more severe sclerosis 12 weeks after 5/6 Nx (22). In the present study, histopathological changes of rat renal tissues were examined at 8 weeks after operation by H&E staining and Masson’s trichrome staining. As shown in Figure 1a, renal cells were arranged normally and there were no signs of histopathological abnormalities in normal rats, whereas significant fibrosis and degeneration were detected in 5/6 Nx rats (n=6, 100%). Moreover, creatinine and BUN contents in serum, as well as total urinary protein content, were significantly higher in the 5/6 Nx rats than in control rats at both 4 and 8 weeks after operation. Furthermore, these contents were increased in a time-dependent manner (Figure 1b). Relative mRNA expression and protein levels of TMEM45A and Notch1 in 5/6 Nx rats were also up-regulated in a time-dependent manner (Figure 1c). 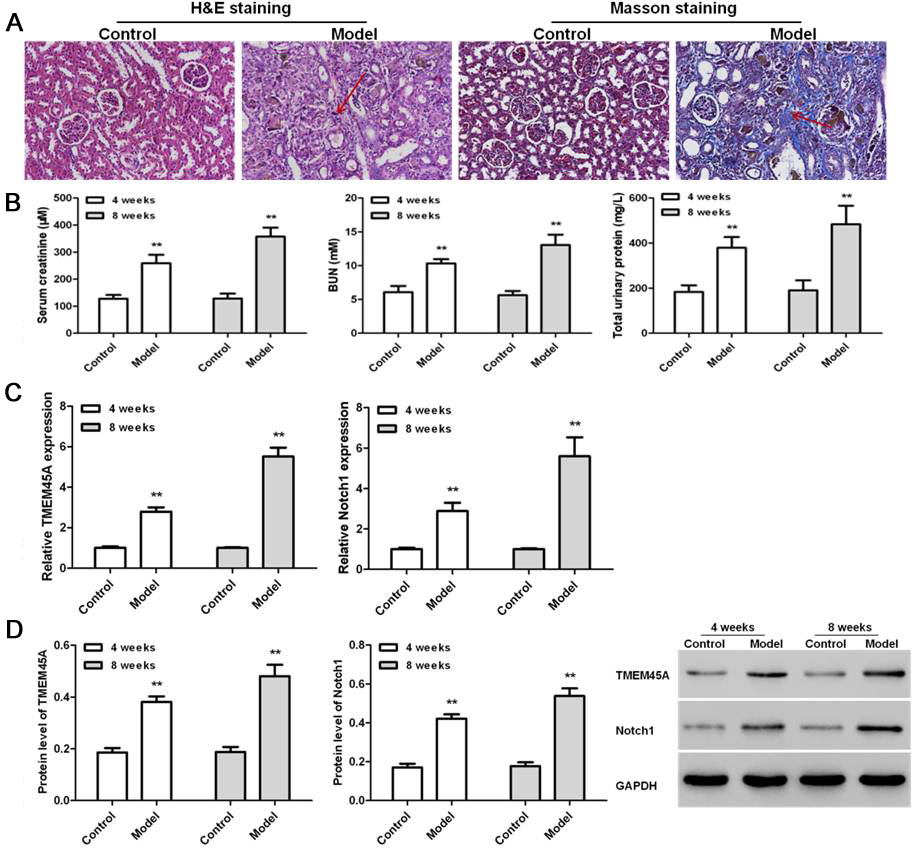 The effect of TMEM45A overexpression on hydroxyproline concentration in NRK-49F cells were measured by UV spectrophotometry. The protein levels of CTGF, FN, Notch-l and Jagged-l were examined by Western blot. The results showed that hydroxyproline concentration in NRK-49F was increased by TMEM45A OE and this effect was weakened by DAPT (Figure 3a). Moreover, the protein expression of CTGF, FN, Notch-1 and Jagged-1 displayed similar trend as that of hydroxyproline (Figure 3b).

The effect of TMEM45A siRNA on hydroxyproline, Col-I, Col-III, TNF-alpha and IL-6 contents as well as was of CTGF, FN, Notch-1 and Jagged-1 protein levels were determined at the end of experiment. As shown in Figure 4, the concentrations of hydroxyproline, Col-I, Col-III, TNF-alpha and IL-6 in NRK-49F cells were elevated by TGF-beta 1 treatment, and these effects were weakened upon TMEM45A knockdown by siRNA (Figure 4a). Relative protein levels showed the same trend (Figure 4b).

Patients with CKD show a steady decline in nephric function over time, and fibrosis is the primary cause of the pathophysiology (23). Fibrosis is involved in the accumulation of excess ECM whick usually leads to loss of function when normal tissues are replaced by scarring (24). In this study, histopathological abnormalities and gradually loss of kidney function were observed in 5/6 Nx rats, which correlated with increased serum creatinine, BUN and total urinary protein. Moreover, relative mRNA and protein levels of TMEM45A and Notch1 were up-regulated in 5/6 Nx rats. The increase in TMEM45A and Notch1 expression was associated with renal dysfunction and fibrogenesis in 5/6 Nx rats at 8 weeks after operation (Figure 1).

TGF-beta 1 is a well-known pro-fibrogenic cytokine that can induce renal fibrosis via activation of both canonical (Smad-based) and non-canonical (non-Smad-based) signalling pathways (25), both of which lead to activation of myofibroblasts, overproduction of ECM components such as connective tissue growth factor, fibronectin, collagenand alpha-smooth muscle actin, and inhibition of ECM degradation (23, 26). Previous reports showed that TGF-beta 1 signaling played a role in regulating mouse hepatic stellate cell differentiation into myofibroblast via the Jagged1/Notch pathway (27), and that TGF-beta -induced epithelial mesenchymal transition (EMT) was blocked by RNA silencing of Jagged1 and chemical inactivation of Notch (28). These results suggest that Jagged1/Notch signaling is positively regulated by TGF-beta 1, a finding that was confirmed in the present study (Figure 2 and Figure 4). 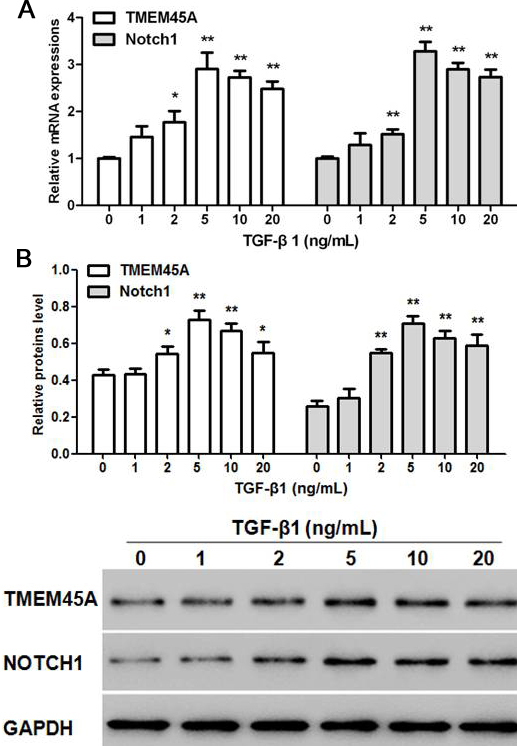 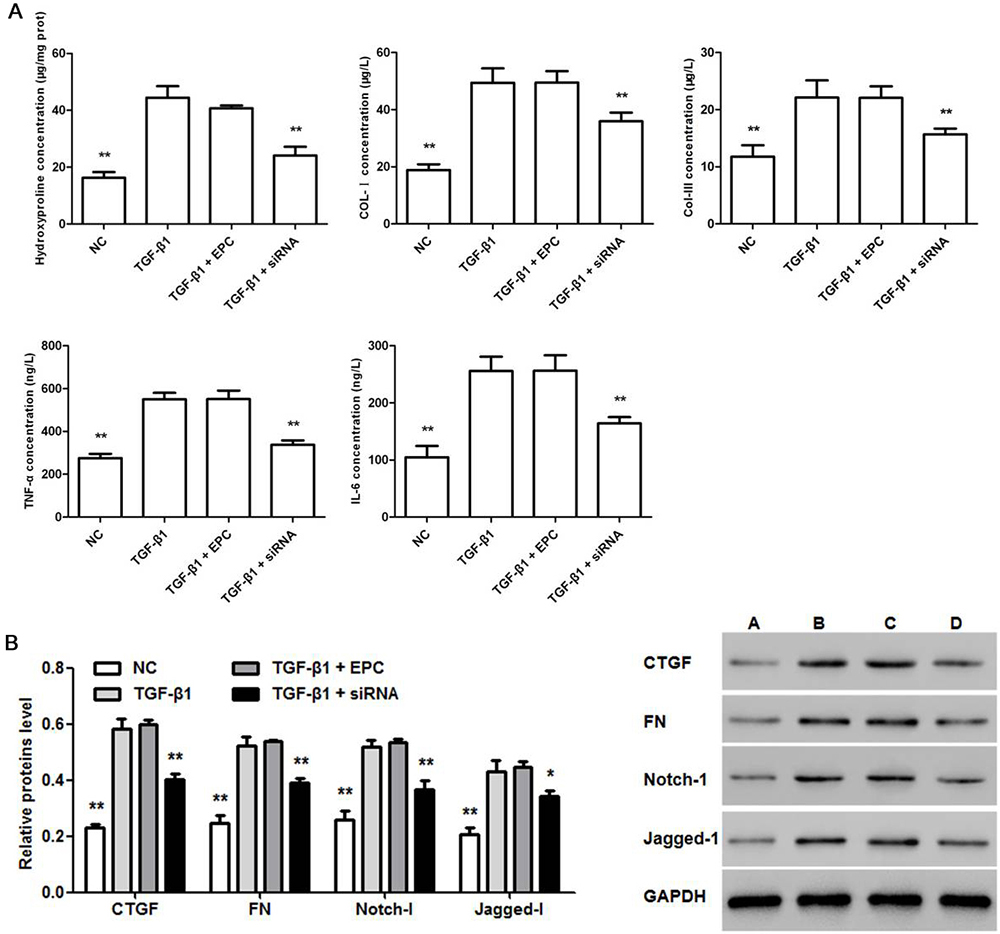 TMEM45A is a multi-pass membrane protein whose elevated expression has been previously associated with epidermal keratinization (29). Moreover, knockdown of TMEM45A resulted in downregulation of of MMP2 and MMP9 (30), which were involved in collagen degradation (18, 19). In the present study, TMEM45A was found to be up-regulated in Nx rats. In addition, TGF-beta 1 induced TMEM45A expression in NRK-49F cells in vitro and over-expression of TMEM45A increased hydroxyproline concentration, as well as CTGF, FN, Notch-1 and Jagged-1 protein levels in NRK-49F cells. The effects of TMEM45A overexpression on ECM components were diminished when Jagged1/Notch signaling was blocked, indicating that Jagged/Notch act downstream of TMEM45A to mediate TMEM45A functions. Moreover, TGF-beta 1-induced expression of ECM components (hydroxyproline, collagen, CTGF and FN) and inflammatory cytokines (TNF-alpha and IL-6) as well as increased protein levels of Notch-1 and Jagged-1 in NRK-49F cells. The observed effects of TGF-beta were greatly diminished by TMEM45A knockdown, suggesting a regulatory path from TGF-beta 1 to TMEM45A to Jagged/Notch1.

Taken together, the results demonstrate that TGF-beta 1 exhibits pro-fibrogenic like effects in NRK-49F cells by upregulating Jagged1/Notch signaling and may show similar effects in 5/6 Nx rat model (Figure1). Moreover, TGF-beta 1 induced the expression of TMEM45A, which positively regulated Jagged/Notch1 signaling. Thus, TMEM45A may be a potential biomarker in renal fibrosis. Reducing TMEM45A expression may attenuate fibrogenesis in patients with CKDs. It will be important to verify in future studies whether this regulation is observed in other renal fibrosis models as well as in clinical trials.

This work was supported by the science and technology project of Fujian Province (No. 2018Y0012), and the construction project of Zhang Xuemei's Academic Inheritance Studio of Famous and Aged Chinese Medicine Experts in Fujian Province.