Gastric cancer, which accounts for 10% of malignant tumors, is the fourth most common malignancy in the world and second leading cause of cancer death (1-2). Although, gastric cancer is treated with surgery and chemotherapy, there is as yet no cure due to cancer invasion, metastasis and development of resistance to chemotherapy (3-5). To invade, cancer cells undergo an Epithelial to Mesenchymal Transition (EMT), by which, cancer cells lose their epithelial cell lineage and acquire mesenchymal cell characteristics capable of displaying invasive behavior and drug resistance (6-9).

Sorcin is a class of drug-resistant calcium-binding proteins that is highly expressed in gastric, colorectal, breast and lung cancers (10-12). Sorcin participates in EMT and its silencing inhibits EMT and metastasis of breast and rectal cancers (12-13). miR-1 is a short-chain non-coding RNA that is known to regulate Sorcin through Ca2+ channel, to control the development of diverse forms of cancer and to restrain epithelial-mesenchymal transition and metastasis (14-22). In the present study, we examined the expression of both miR-1 and Sorcin in gastric cancers and examine how they jointly regulate the mobility and migration of cancer cells in vitro.

Cells were seeded in six-well plates at a density of 1×05 cells/ml. After incubation for 24 h, cells were treated with miR-1 mimic, miR-1 inhibitor or with small interfering RNA (siRNA) in presence of lipofectamine 3000 (InVitrogen, Carlsbad, CA) according to the manufacturer’s instructions for 24 h. RNA fragments were synthesized by Shanghai JiMa Pharmaceutical Technology Co., Ltd. (Shanghai, China).

Total protein in protein extracts was measured using a BCA kit. Proteins were resolved in SDS-PAGE and transferred onto PVDF membranes. Membranes were blocked in 5% skim milk powder at room temperature for 2h. These were then incubated with the primary antibodies, followed by washing and incubation with HRP-conjugated secondary antibodies. Bands were revealed by use of enhanced luminol-based chemiluminescent (ECL) substrate and analyzed by ChemiDoc XRS imaging system. In each assay GAPDH was used as housekeeping control.

For the transwell invasion assays, SGC-7901 cells pre-transfected with miR-1 mimic or miR-1 inhibitor (2×104 cells per well) were placed in the upper chamber of each Transwell dish (8 mm pore size; Merck Millipore Corp, Billerica, MA, USA) that were coated with Matrigel (Becton-Dickinson, New Jersey, USA). The lower chamber was filled with complete medium (containing 20% FBS). Cells were incubated at 37°C for 24 h and non-invading cells on the upper membranes were removed and the invasive cells entering the lower chamber were fixed in 95% ethanol, stained with hematoxylin, photographed and quantified. Briefly, the invasive cells in the lower chamber were counted by blindly by three individuals.

For wound-healing assays, cells were seeded at 1×05/ml in a 6-well plate coated with Matrigel and were cultured until reached a 90% confluent. Then, the dishes were scored by creation of a straight scratch line using a sterile pipette tip. Dishes were gently washed to removed detached cells. Cells migrated to the scratch line were counted in 24 h with a digital camera (Leica DFC300FX).

Experiments were carried out at least in triplicates. Data were analyzed using SPSS 10.0. Statistical software and the results were expressed as means ± standard deviations. T test was used to determine differences between two groups. The one-way-ANOVA test was used and the variances were analyzed when the variances followed a normal distribution. Results with p values < 0.05 were considered significant.

4. RESULTS
4.1. miR-1 is down-regulated and Sorcin is highly expressed in gastric cancer cells 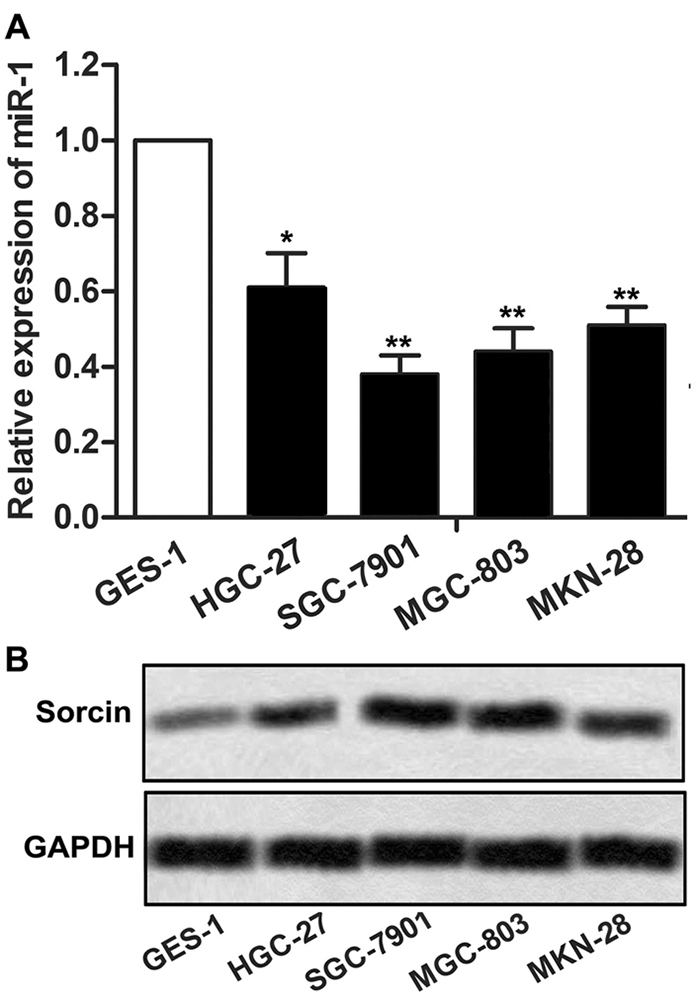 4.2. Overexpression of miR-1 inhibits the mobility and migration of gastric cancer cells Up-regulated miR-1 inhibited the invasion and migration of gastric cancer cells. The cells were divided into control group, miR-1 mimic group and miR-1 inhibitor group. MiR-1 mimic and miR-1 inhibitors were synthesized and transfected into SGC-7901 cells, respectively. (A) The expression of miR-1 was detected by qRT-PCR. (B) Transwell invasion assay was used to detect the invasive ability of gastric cancer cells. (C) Quantitative analysis of invasive cells. (D) The migration ability of gastric cancer cells was detected through wound healing assay. (E) Quantitative analysis of wound healing assay. (F) Western blot was used to detect the expression of MMP-7 and VEGF. (G) Quantitative analysis of MMP - 7 and VEGF protein expression levels. GAPDH was used as internal reference. * p < 0.0.5., *** p < 0.0.0.1 versus control group. 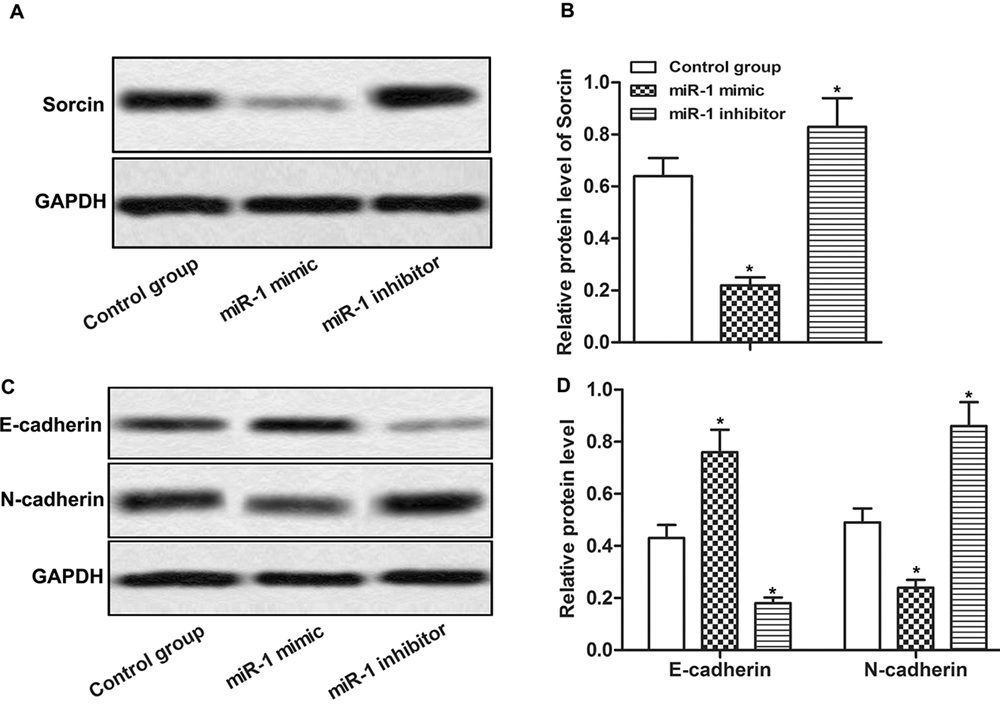 The TargetScan showed that Sorcin has a miR-1-complementary binding site, suggesting existence of interaction between miR-1 and Sorcin (Figure 4A). The existence of such an interaction was examined by transfecting cells alone or simultaneously with 100 nM miR-1 mimic and wild type or mutant form of Sorcin and then carrying out luciferase assay. The results showed a distinct downtrend when cells were co-transfected with miR-1 mimic and wildtype Sorcin 1. However, and no effect was observed when the cells were transfected with the mutated form of Sorcin (Figure 4B , ** p < 0.0.1.). These findings establish of existence of a negative feedback loop comprised of miR-1 andSorcin. 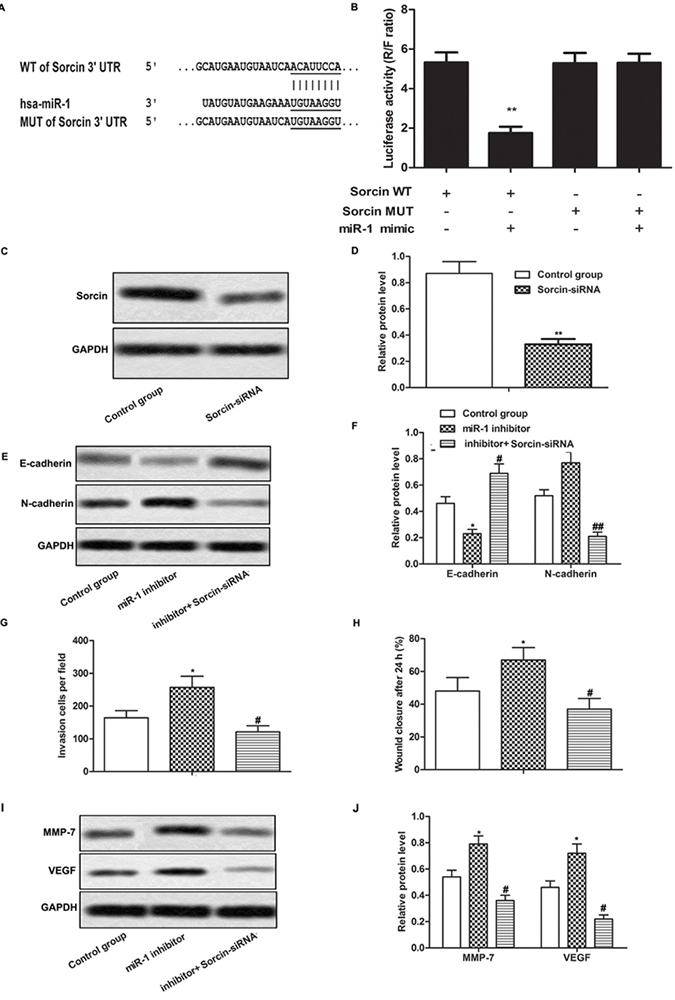 The invasive and migratory ability of cancer cells in miR-1 inhibitor group cells were also significantly enhanced by suppressing Sorcin by transfecting cells with Sorcin siRNA (Figure 4G-H). On the other hand, the expression of MMP-7 and VEGF in gastric cancer cells which was significantly increased by inhibition of miR-1 was further enhanced by transfecting the gastic cancer cells with Sorcin siRNA (Figure 4I-J, * p < 0.0.5., # p < 0.0.5.).

Together, such results suggest that miR-1 suppresses cell migration and mobility and enforces the epithelial phenotype by down-regulating the expression of Sorcin.

A large number of studies show that miRNAs are involved in the development of various cancers, including gastric cancer, and act either as tumor suppressors or tumor oncogenes. For example, miR-194, miR-34A, miR-410 and miR-1 are recognized as tumor suppressors and inhibit cell proliferation as well as EMT and migration of gastric cancer cells (23-25). On the other hand, miR-362 and miR-630 act as oncogenes and promote the proliferation and migration of gastric cancer cells (26-27).

The prognosis of gastric cancer appears to be directly related to the expression level of miR-1. For example, in one study, the 5-year survival rate of patients with gastric cancer was higher when the expression of miR-1 was found to be high while a low miR-1 expression correlated with a poor prognosis (28). To find how miR-1 might be involved in gastric cancer behavior, we used cell lines that inherently show a low level of miR-1. Then, the miR-1 was overexpressed in these cells and motility and migration ability of gastric cancer cells were assessed. This showed that such an over-expression inhibited the mobility and migration of SGC-7901 cells. This treatment also reduced the protein levels of MMP-3 and VEGF that participate in tissue remodeling and angiogenesis and which are required for invasive behavior (26, 28). The knock down of miR-1 exerted an opposite effect. These findings are consistent with previous results that show that miR-1 has a tumor supressive role by regulating the expression of downstream oncogenes including c-MET, MALAT1, KRAS, etc (29-31).

EMT is an important process which is closely associated with cancer cell metastasis. In the EMT process, tumor cells lose epithelial cell characteristics. Up-regulated MMP-7, MMP-3 and VEGF accelerate the degradation of extracellular matrix proteins, which increase the metastasis ability of cancer cells and promote tumor cells to obtain stem cell characteristics (9). Lijun Xu et al. found that miR-1 was able to inhibit EMT by regulating MAPK and PI3K / Akt pathway in rectal cancer cells (21). Y-N Liu et al. have shown that miR-1 regulates the expression of Slug which is the downstream target of EMT to inhibit EMT in prostate cells (36). Our investigation showed that overexpressed miR-1 elevated the expression of E-cadherin and suppressed the expression of N-cadherin. Combine the experimental results mentioned above we know that overexpressedmiR-1 inhibited cell invasion and migration by inhibiting the occurrence of EMT in gastric cancer cells. Sorcine and long non-coding RNAs are key regulators of EMT and tumour drug resistance of cancer stem cells (6-9, 37-38). Sorcin might be involved in such processes by regulation of E-cadherin and VEGF expression (12). Here, we showed that overexpression of miR-1 suppressed the expression of Sorcin and coordinately increased E-cadherin and VEGF expression. Moreover, knockout of Sorcin abolished the effect of miR-1 inhibitor on cell migration and the expression of MMP-7 and VEGF. Taken together, the findings support the view that miR-1 controls the mobility and migration of gastric cancer cells.

We sincerely appreciate the technical support from The F.irst affiliated hospital of Wenzhou medical University.