Glucose is a physiological stimulator of insulin secretion by pancreatic islet cells. However, Type 2 diabetes mellitus (T2DM) leads to oxidative stress and apoptosis of beta cells, which leads to further hypoinsulinemia and hyperglycemia (1-4). C/EBP homologous protein (CHOP), and peroxisome proliferator-activated receptor-γ coactivator-1α (PGC-1α) are involved in oxidative stress (11-12). CHOP, an enhancer binding protein, is involved in endoplasmic reticulum stress-induced apoptosis and inhibits peroxisome proliferator-activated receptor-γ coactivator-1α (PGC-1α), which is a master regulator of mitochondrial biogenesis (4, 13-14). PGC-1α is a master regulator of ROS scavenging enzymes that appears to contribute to cell survival (15). In present study, we examined whether curcumin, which is extracted from rhizomes of curcuma longa, rhizome curcumae, rhizoma curcumae and acorus calamus, might reduce the apoptosis through, its anti-oxidative, anti-inflammatory, anti-apoptotic, and angiogenic properties (5-10). We also examined whether the effect of curcumin is mediated through CHOP, PGC-1α and ERK1/2 mediated regulation of oxidative stress and apoptosis in pancreatic beta cells that were subjected to a high glucose environment.

The adenovirus of CHOP used in this study was purchased from Genekey Co., Ltd .(Genekey, Shanghai, China). Cells were transfected with Lipofectamine 2000 (Invitrogen-Thermo Fisher Scientific, Carlsbad, CA) with PGC-1 using the target sequences shown in Table 1. 48 h after each transfection, the efficiencies of CHOP overexpression and PGC-1α knockdowns were assessed using Western blotting.

Total RNA was extracted from Min-6 cells using TRIzol reagent (Thermo Fisher Scientific, MA, USA). The purity of RNA was assessed by measuring the absorbance ratio of 260/280 nm using a NanoDrop ND-1000 spectrophotometer (Thermo Scientific, MA, USA). Reverse transcription of RNA was carried out using a PrimeScript™ RT reagent Kit with gDNA eraser (RR047A; Takara, Tokyo, Japan). The cDNAs were quantitated by qRT-PCR using SYBR® Premix Ex Taq™ (RR420A; Takara, Tokyo, Japan). The data were normalized using levels of GAPDH as a housekeeping control and were further analysed by the 2−ΔΔCT method. The primers used for qPCR are listed in the Table 1.

To explore the influence of high glucose on oxidative stress and apoptosis, pancreatic beta cells were cultured with normal glucose (NG 5 mM) or high glucose (HG, 25 mM) in presence and absence of curcumin. The treatment of cells with HG and not NG led to oxidative stress as evidenced by increase in ROS, MDA and SOD activity and apoptosis as evidenced by increased in TUNEL positivity (Figure 1A-B). Treatment of cells with curcumin alone at 1-10 μM did not change the viability of cells after 24 hr of treatment, however, the viability of cells decreased with 50 μM (Figure 2A). The treatment of cells with curcumin at a concentration of 10 μM led to a significant reduction in ROS, and MDA and decreased SOD activity inducible with HG (Figure 2B-2D). Moreover, curcumin (10 μM) significantly inhibited HG (25 mM) induced apoptosis in a dose dependent manner (Figure 2E). 4.2. Curcumin reduces oxidative stress and apoptosis by regulation of CHOP and PGC-1α We, then, carried out the analysis on cells that were treated with HG in presence and absence of curcumin. Treatment of cells with 25 mM HG led to increased CHOP while PGC-1α was decreased (Figure 3E). These effects were not due to increased osomotic pressure by HG since the cells that were treated with 25 mM mannitol (HM, 25 mM mannitol and HG have the same osmotic pressure Figure 3F) failed to show any effect on the expression of CHOP or PGC-1α.

Treatment of pancreatic beta cells with curcumin for 4 h prior to incubation with HG 25 mM for 24 hours showed that curcumin counteracted the effect of HG (Figure 3G-H). The inverse relationship of CHOP and PGC-1α expression in curcumin treated cells induced by HG is shown in Figure 3I. To further validate the existence of an inverse relation between expression of CHOP and PGC-1α, CHOP was overexpressed by an adenoviral vector (Ad-CHOP). The overexpression of CHOP led to inhibition of PGC-1α, at the mRNA and protein level (Figure 4A-B). These results were further validated by the siRNA knockdown of PGC-1α, which also showed that this knockdown markedly upregulated the mRNA and protein expression of CHOP (Figure 4C-D). Moreover, We found that overexpression of CHOP or knockdown of PGC-1α can induce oxidative stress injury of pancreatic beta cells and further aggravate the level of oxidative stress induced by HG (Figure 4E-G). 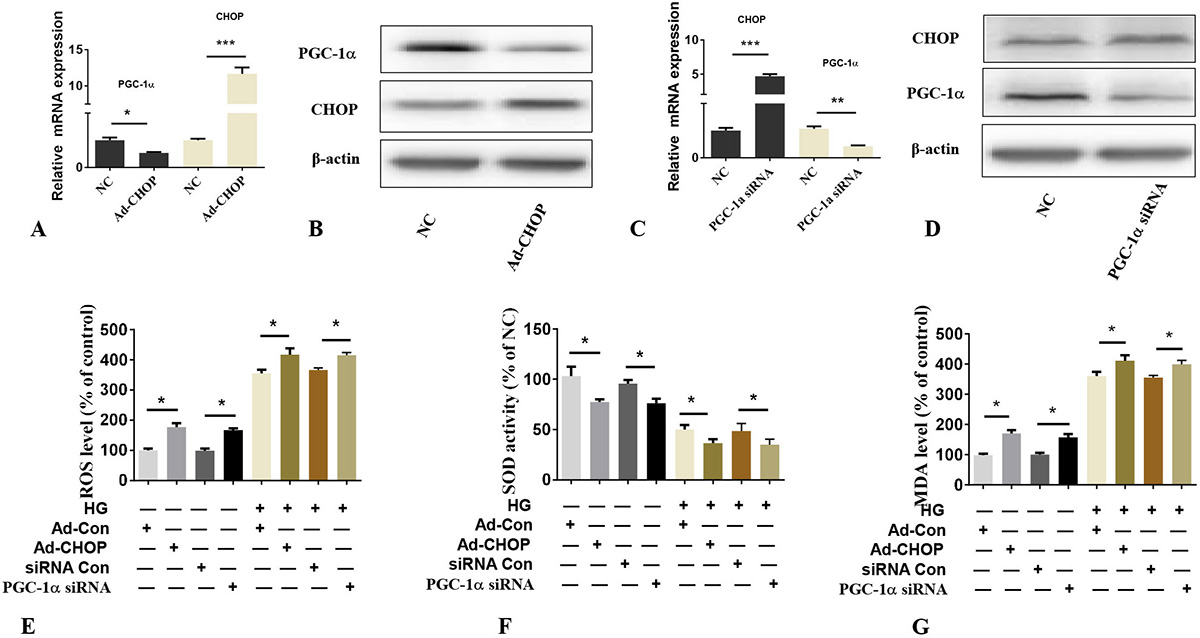 CHOP and PGC-1α appear to inversely regulate oxidative stress and apoptosis in the pancreatic beta cells that are treated with HG. To show this, we examined the apoptosis and oxidative stress as evidenced by cellular levels of ROS, MDA and SOD acitvity in cells that were treated with HG, or HG and curcumin in cells that were either tranduced with empty adenoviral vector or CHOP or control siRNA and PGC-1α siPNA (Figure 5A-C). 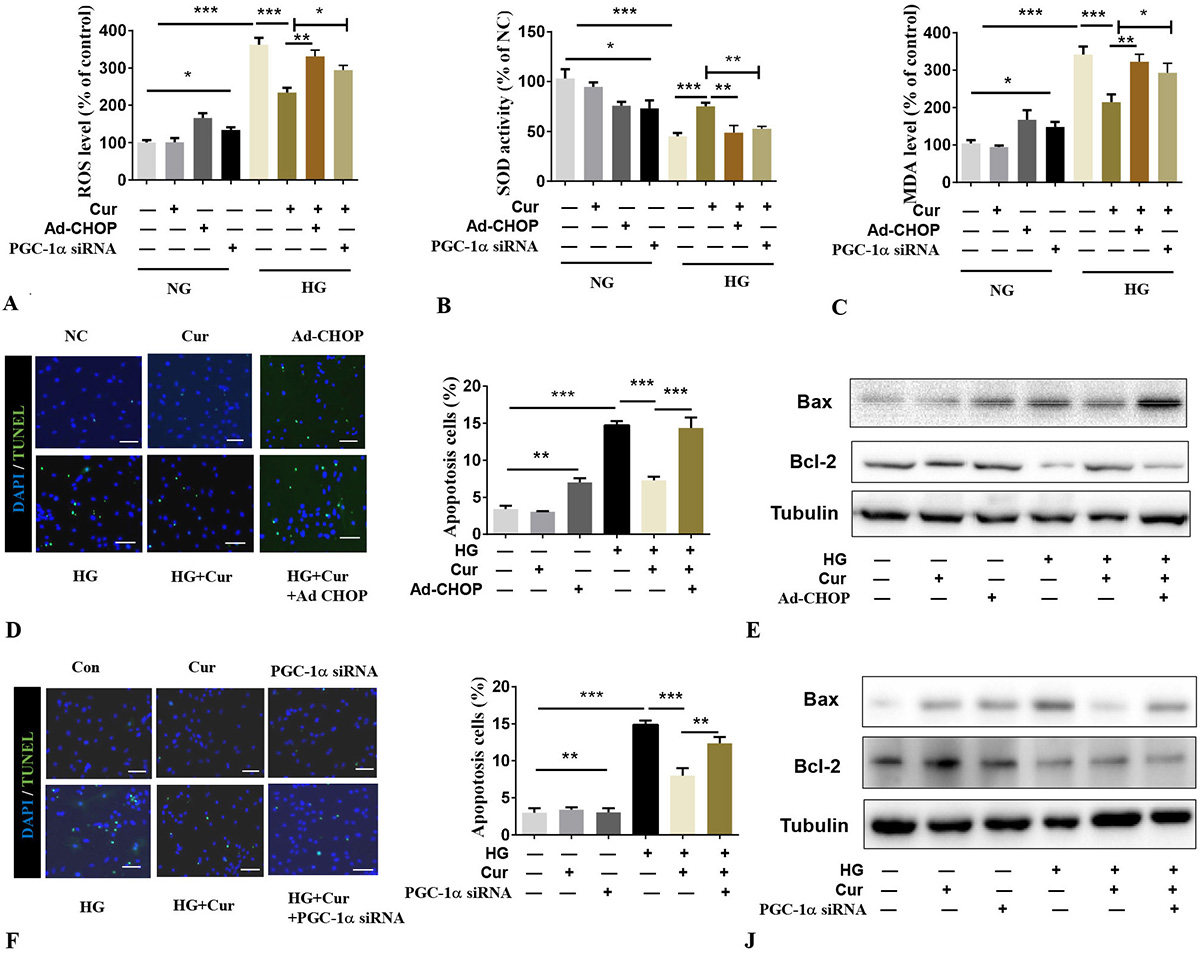 These experiments confirmed that HG leads to a significant increase in oxidative stress as evident by increased ROS, and MDA while reducing the activity of SOD whereas treatment of cells with curcumin significantly reduced the level of ROS and MDA and increased the activity of SOD. Overexpression of CHOP or knockdown of PGC-1α partially blocked the inhibitory role of curcumin on HG induced oxidative stress (Figure 5A-C).

4.3. Curcumin regulates the phosphorylation of ERK 1/2 and reduces oxidative stress and apoptosis 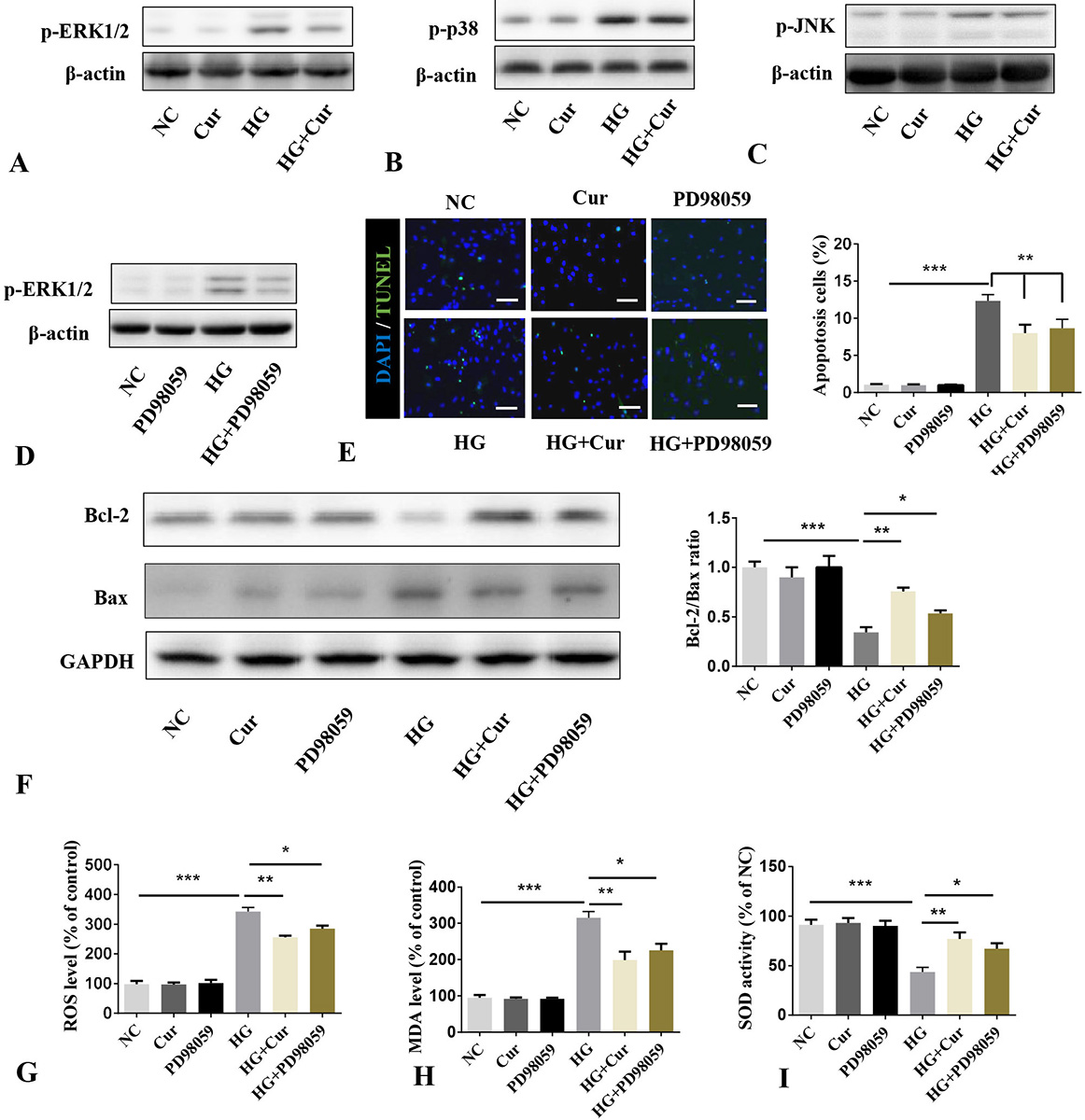 In conclusion, consistent with other published reports, we show that HG treatment of beta islet beta cells induced pERK1/2 expression (19-21). Yet, in some studies, HG decreased the phosphorylation of ERK1/2 and also increased the phosphorylation of p38 and JNK (22-23). In our analysis, we failed to see a similar effect of HG on phosphorylation of p38 and JNK (21, 23). We also show here that curcumin relieves oxidative stress and opposes apoptosis induced by HG in pancreatic beta cells jointly by modulating the expression of CHOP and PGC-1αlpha as well as regulation of ERK 1/2 phosphorylation without any effect on the phosphorylation levels of p38 and JNK. Furthermore, overexpression of CHOP or siRNA knockdown of PCG-1alpha counteracted the effects of curcumin on HG induced oxidative stress and apoptosis. Finally, blockade of pERK1/2 reduced the HG induced apoptosis in pancreatic beta cells. Together, these data show that curcumin might have clinical application in reducing the negative impact of hyperglycemia in diabetic patients (Figure 7). 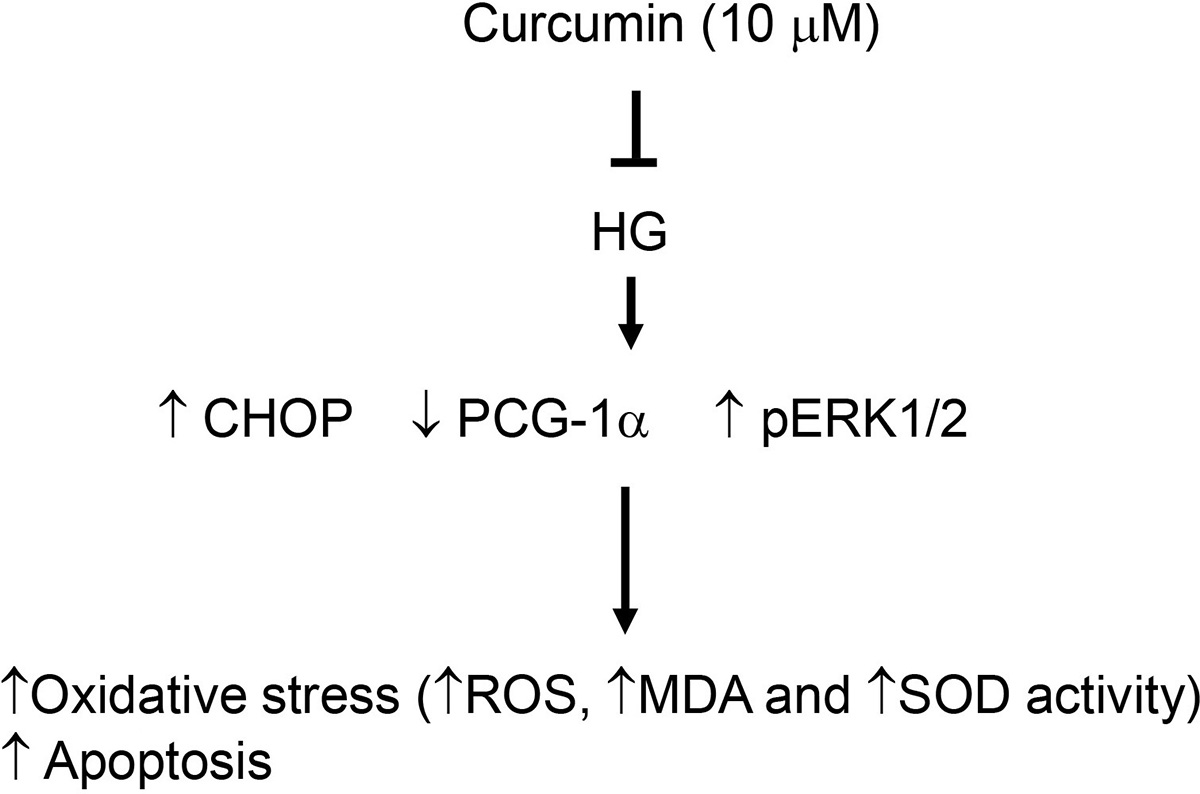 #Hou Kaijian, Yongru Chen contributed equally to this work. This study was supported by Shantou science and technology project (No:180828094013938).