Glioblastoma multiforme (GBM) is the most common and deadliest primary malignant tumor of the adult central nervous system, and exhibits highly invasive and proliferative characteristics. Currently, the standard treatment for GBM is surgical resection followed by chemoradiation. However, even with standard treatment, the survival time of patients with GBM is only 18 months (1). Additional treatment options include passive and active immunotherapy, and the application of angiogenesis inhibitors in combination with chemotherapeutics and gene/antibody therapy. However, the presence of the blood–brain barrier (BBB) and the invasive nature of brain-derived tumor cells have meant that these therapies have been unsuccessful in the treatment of GBM. A better understanding of the unique biology of glioma invasion may therefore provide brain-specific interventions for the treatment of this rapidly progressing disease (2,3).

Bone morphogenetic proteins (BMPs) are members of the transforming growth factor-β (TGF-β) superfamily. There are more than 30 members in the BMP family. These proteins are also referred to as osteogenic proteins, growth/differentiation factors, and cartilage-derived morphogenetic proteins (2,4,5). The BMP family protein BMP4 was first identified in 1988 (6). A series of recent studies have demonstrated that activation of the BMP4 signaling pathway can induce tumor suppression, both in mice and humans (7,8). Su et al. have reported that Adriamycin inhibits lung cancer cell proliferation through BMP4 (9). Piccirillo et al. have reported that exposure of dissociated GBM cells to BMP4 for 48 hours prior to transplantation into the striatum of SCID Beige mice dramatically reduces the tumor-promoting properties of these cells (8). BMP4 has also been shown to regulate the invasion and migration of various tumor cell types (10-12). For example, GBM invasion in nude mice is significantly decreased following BMP4 overexpression in the tumor cell population. However, until now, the mechanism by which BMP4 regulates invasion and migration in GBM has remained unclear.

Twenty-seven human GBM samples were collected from patients with primary GBM who underwent total tumor resection at Renmin Hospital of Wuhan University from January 2013 to January 2015. The average age of patients was 35 years (range 18–75). All tumor samples were subjected to pathological examination and related molecular testing (MGMT promoter methylation, 1p19q co-deletion and IDH1/IDH2 mutation analysis), and were defined according to the 2016 WHO classification (14). Three normal brain tissues were obtained from patients who underwent surgical decompression for cerebral edema. All tissues were placed immediately into liquid nitrogen after resection and were subsequently stored at -80 °C. The study was approved by the Ethics Committee of the Renmin Hospital of Wuhan University (No. 2012LKSZ (010) H), and written informed consent was obtained from each patient.

Human U251 and U87 malignant glioma cells were obtained from the Shanghai Institute of Biochemistry and Cell Biology, at the Shanghai Institutes for Biological Sciences, Chinese Academy of Sciences, and were cultured in Dulbecco’s modified Eagle’s medium (DMEM) containing 10% fetal bovine serum, HEPES buffer 1M, PH 7.0 and 3% Glutamine. Adherent cell cultures were passaged at a ratio of 1:3 every 3 days using 0.25% trypsin-EDTA. FuGENE HD (Promega, Madison, WI, USA) and LipofectAMINE 2000 (Invitrogen, Carlsbad, CA, USA) were used to transfect cells with plasmids and siRNAs, respectively.

Lentiviral gene transduction was used to establish a U251 GBM stable cell line constitutively expressing BMP4. Human cDNA encoding BMP4 was inserted into the pLVX-AcGFP1-C1 lentiviral transfer vector (632155, Clontech Mountain View, CA, USA). The empty pLVX-AcGFP1-C1 vector was used to establish the stable control cell line. Lentiviral packaging was performed in 293FT cells (Invitrogen, Carlsbad, CA) following the co-transfection of control or BMP4 transfer vectors with the pMD2.G and psPAX2 packaging plasmids. U251 cells were infected with lentivirus at a multiplicity of infection (MOI) of 10 using Polybrene (8 µg/mL) to enhance viral transduction. The efficiency of viral infection was monitored by GFP expression. Puromycin (10 µg/mL) was used for cell selection.

Eight-week-old congenitally athymic male nude mice (Beijing Vital River Laboratory Animal Technology Co., Ltd.) were used in all tumor xenograft experiments. Intracranial injection of U251 cells into the lateral ventricle was performed as described previously (16). Briefly, mice were anesthetized by isoflurane, and a 1-cm midline sagittal incision was made over the parieto-occipital bone using a sterile scalpel. A sterile 25-gauge needle was used to penetrate the skull at a position 2 mm to the right of the bregma and 1 mm anterior to the coronal suture. Then, 5 × 105 cells in 3 μL of phosphate buffered saline (PBS), or PBS alone for the control, were slowly injected into the target site. Tumor growth was analyzed 15 weeks after injection. The experimental protocol was approved by the Institutional Ethics Committee of the Faculty of Medicine at Renmin Hospital of Wuhan University and conducted in accordance with institutional guidelines and regulations.

For scratch wound assays, U251MG cells were seeded in six-well plates at a density of 2 × 105 cells per well. At 8 h post-seeding, scratches were made in the cell monolayer using a 200 µl pipette tip and any floating cells were subsequently removed with PBS washes. The cells were then incubated in DMEM supplemented with 1% FBS. Photomicrographs were taken at 0 h and 24 h post-wounding. The distance traveled by the cells was determined by measuring the wound width at 24 h and subtracting this value from that obtained for the 0 h measurement. Wound closure was expressed as a percentage relative to the 0 h measurement.

For transwell assays, 4 × 105 U251MG cells were seeded into the upper well of the transwell chamber. For invasion assays, cells were seeded into wells in which the polycarbonate filters were coated with Matrigel (QCM 24-Well Cell Invasion chambers; Cell Biolabs, San Diego, CA, USA). For invasion assays, cells were seeded in medium without serum, and medium supplemented with serum was used as a chemoattractant in the bottom chamber. The cells were then incubated at 37°C for 12 h. Non-migratory or non-invasive cells that remained on the upper surface of the polycarbonate filter were removed with a cotton swab. Those cells that had migrated to the lower surface of the membrane were fixed in 100% methanol for 10 min, air dried, and then stained with 4′, 6-diamidino-2-phenylindole and then counted under a microscope.

Results were analyzed using SPSS17.0 statistical software (SPSS, Chicago, IL, USA) and expressed as means ± standard deviation (SD) in the transwell analysis. The Student’s t-test was used to compare the means of two groups, one-way ANOVA was used to compare the means of multiple groups, and Pearson’s test was used to investigate correlations between two groups and to compare quantitative values of expression. A P value < 0.05 was considered statistically significant. All the experiments were repeated three times. 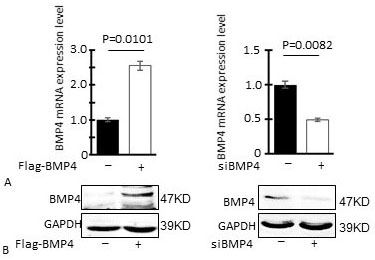 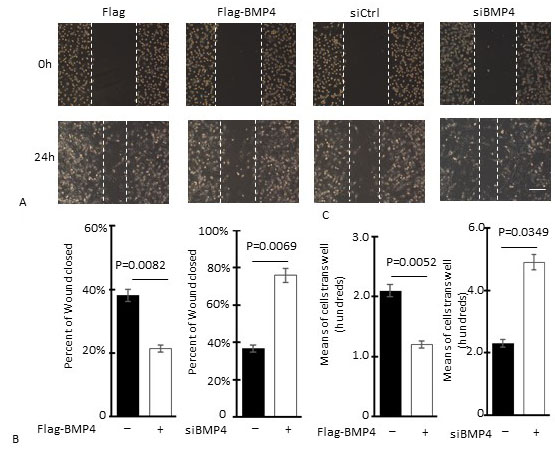 Transwell migration assays also revealed a role for BMP4 in the migration and invasion of GBM cells. BMP4 overexpression resulted in a reduction in the number of U251 cells migrating through to the underside of the transwell filter (mean cell counts for Flag control and Flag-BMP4 groups were 22.5 ± 1.8 and 12.6 ± 1.6, respectively; P = 0.0052, Figure 3C left), while suppression of BMP4 expression with siRNA resulted in enhanced U251 cell transwell migration and invasion (mean cell counts for siCtrl and siBMP4 groups were 23.1 ± 1.1 and 48.2 ± 3.3, respectively, P = 0.0049; Figure 3C right). 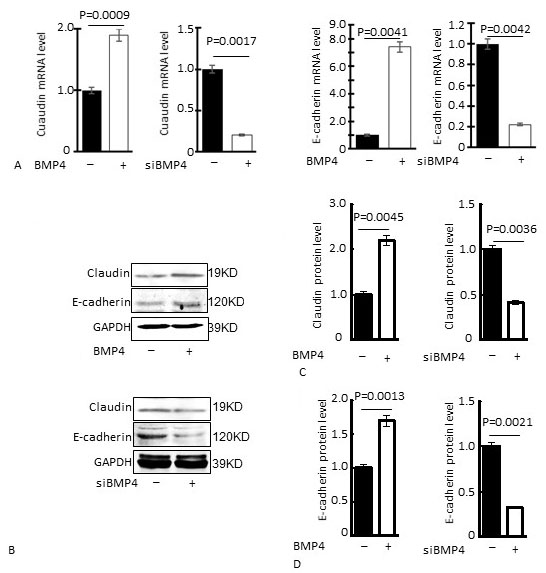 In parallel to our in vitro assays, we also examined the effects of BMP4 overexpression on the ability of U251 cells to generate solid tumors in vivo. Cells stably overexpressing BMP4 were established by lentiviral-mediated gene delivery using a vector that carried a GFP reporter for viral transduction. Analysis of GFP fluorescence demonstrated that the percentage of virally transduced cells was greater than 95% (Figure 5 A), and RT-PCR and western blotting assays showed that BMP4 expression was significantly increased in the GFP-BMP4 group, when compared with the GFP control group (Figure 5 B, C). An intracranial GBM model (n = 12 for each group), which involved the injection of GFP-BMP4-U251 or GFP-U251 cells into the cerebral cortex of athymic-nu/nu male mice, was then used to evaluate the effects of constitutive BMP4 expression on GBM invasion in vivo. At 15 weeks post-injection, the depth of invasion of brain tissue was shallower and the boundary between brain tissue and tumors was clear in BMP4 over expression group, while the depth of invasion of brain tissue was deeper and the boundary between tumors and brain tissue was not clear in control group (Figure 5 G). At the same time, the expression of the invasion markers E-cadherin and claudin was evaluated in tumor specimens by immunohistochemistry. Significantly increased expression of both E-cadherin and claudin was observed in the tumors generated from U251 cells with stable BMP4 overexpression, when compared with those generated from the GFP controls (Figure 5F). These results therefore suggested that expression of BMP4 in GBM negatively regulates tumor invasion. BMP4 inhibits GBM cells invasion in vivo. (A) Immunofluorescence micrographs showing U251 cells infected with Lentivirus -GFP and Lentivirus -BMP4 at MOI 30 for 72 h; The efficiency of viral transduction was greater than 95%, as determined by analysis of GFP fluorescence; (B) Analysis of BMP4 mRNA and (C) protein levels in stable cell lines; (D) : Analysis of BMP4 mRNA and (E) protein levels in nude mice tumors; (F) E-cadherin and claudin expression in tumors was assessed by immunohistochemical staining (dark red); G: The depth of invasion of brain tissue by tumors and the boundaries between tumors and brain tissue; Statistical analysis in B and D was performed using the paired Student’s t-test; Scale bars in A and F = 100 μm, G1=400 μm, G2= 200 μm, G3=50 μm. 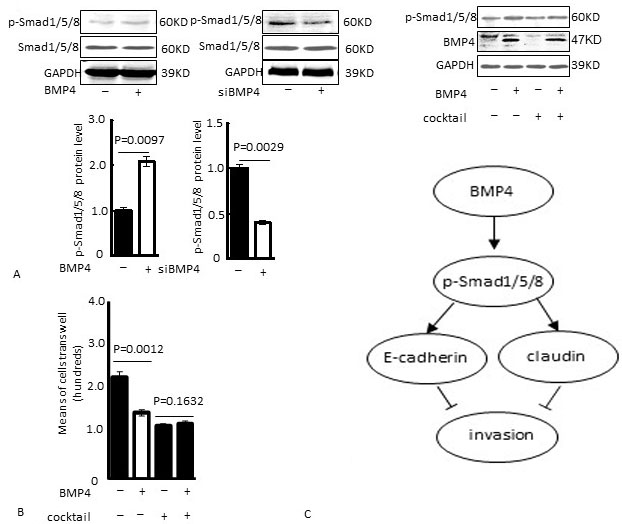 The highly invasive nature of GBM remains a significant challenge in the treatment of this disease and a is major reason for the failure of current treatment regimens (17). In GBM, tumor cells can invade the surrounding brain tissue at any stage of tumor progression, and consequently small populations of cells can persist even after surgery, radiation therapy or chemotherapy. Although drugs that target angiogenesis can prolong the life of patients with recurrent GBM, the disease is incurable (18,19). Therefore, there is an urgent need to identify new therapeutic targets and strategies for the treatment of GBM.

In previous studies, we have shown that BMP4 expression is significantly lower in GBM (13), and that low BMP4 expression promotes the proliferation and tumorigenic potential of GBM cells (7,13). In agreement with our findings, other studies have also shown that GBM tumor invasion is significantly decreased following overexpression of BMP4 (20), suggesting that BMP4 functions as a tumor suppressor in this disease.

In this study, we examined the effects of BMP4 expression on human GBM tumor cell invasion, both in vitro and in vivo, and found that BMP4 negatively regulated this process. Importantly, our analysis of human GBM samples revealed that BMP4 expression positively correlates with the expression of E-cadherin and claudin, known negative regulators of invasion. This result suggests that down regulation of BMP4 expression contributes to the invasive phenotype of tumor cells, and therefore provides further evidence to support a role for BMP4 in the invasion of GBM.

In conclusion, we have found that BMP4 can inhibit the invasion of GBM cells through the activation of the BMP/Smad signaling pathway. BMP4 expression in tumor cells can increase the phosphorylation of Smad1/5/8 to active BMP/Smad signaling, which further promotes the expression of E-cadherin and claudin, thereby inhibiting cell invasion and migration. These findings provide additional insights into the regulatory role of BMP4 in GBM cell invasion, and identify this protein as a new putative therapeutic target in the treatment of GBM.

This work was supported by the National Natural Science Foundation of China (grant no. 81502175 to B.L, 81572489 to Q.C, 81372683 to Q.C, Hubei Province health and family planning scientific research project (grant no. WJ2017Q008 to B.L). We thank James Monypenny, PhD, from Liwen Bianji, Edanz Group China (www.liwenbianji.cn/ac), for editing the English text of a draft of this manuscript.