Cardiovascular diseases remain a major challenge of modern medicine because of relatively high associated mortality or lasting disability and growing occurrence due to ageing of the population in many countries. Atherosclerosis can affect virtually any artery, but is most dengerous in major vessels, such as coronary artery, where it can lead to the development of fatal cardiovascular events. Despite recent advances in cardiovascular diseases treatment, there is still no effective cure against atherosclerosis, partly due to the multifactorial nature of this disease. Three major pathogenesis mechanisms of atherosclerosis have been defined to date: lipid accumulation in the arterial wall, inflammation and changes of the arterial wall cellular structure, involving cellular proliferation, migration and phenotype changes (1). These processes are tightly linked to each other and to global events in the body, involving chronic inflammation, oxidative stress and impaired lipoprotein metabolism.

Mitochondrial dysfunction and associated oxidative stress underlie many chronic human pathologies, including cardiovascular diseases (2-4). Oxidative stress results from excessive production of reactive oxygen species (ROS) that can be formed by the mitochondria as by-products of the respiratory chain functioning. In normal conditions ROS levels are relatively low, and the oxidants play a role of messenger molecules. Elevated production of ROS that overcomes the antioxidant capability of cells leads to the pathology development through oxidative damage of proteins, lipids and DNA. Dysfunctional mitochondria can therefore become dangerous sites of uncontrolled ROS production and cell damage.

Pathogenesis of atherosclerosis involves several mechanisms that are active at different stages of the disease development. Endothelial dysfunction is regarded as one of the earliest events in atherosclerotic lesion formation (9). Endothelium provides the functional link between the blood circulation and the vessel wall (10). Local disturbance of the arterial endothelium leads to cell activation promoting the recruitment of circulating immune cells and increased permeability for circulating lipoprotein particles. Low-density lipoprotein (LDL), especially in its modified atherogenic form, has been identified as the main source of lipids accumulating in the arterial wall.

Atherosclerotic plaque growth depends both on the recruitment of immune cells from the bloodstream and on migration of vascular smooth muscular cells (VSMCs). Circulating monocytes recruitment and adhesion to the vascular endothelium and activation is directed by cytokine signaling. VSMCs undergo a phenotype switch to acquire the ability to migrate to the lesion site (11). Both of these cell types actively participate in lipid accumulation by internalizing atherogenic modified LDL particles, such as oxidized LDL or desialylated LDL (12). Cells with cytoplasm filled by accumulated lipid droplets, so-called “foam cells” are a characteristic feature of atherosclerotic plaques. Inside the plaque, cell death and defects in autophagy and cleaning of cell debris result in the formation of the necrotic core (13). At later stages of the development, the plaque is separated from the vessel lumen by a fibrous cap that has protective functions. At advanced stages, atherosclerosis is associated with prominent vascular wall thickening and calcification (14). Although large plaques can by themselves obstruct the vessel and result in ischemia development, most dangerous is associated thrombogenesis. Unstable plaques are characterized by the disturbance of the fibrous cap, and can induce thrombogenesis on the surface, which can be followed by fatal events caused by the obstruction of vital blood vessels by a detached thrombus. Progression of atherosclerosis involves molecular mediators of both the innate and adaptive immune systems, which supports the concept of atherosclerosis being an autoimmune disease (15).

According to endosymbiotic origin hypothesis, mitochondria derive from α-proteobacteria. These organelles have their own genome resembling bacterial genome in its organization. In human mitochondria, mtDNA is a double-stranded circular molecule of approximately 16,569 base pairs containing 37 genes encoding 13 mRNAs, 22 tRNAs and 2 ribosomal rRNAs. Mitochondrial transcription factor A (TFAM) is crucial for condensing mtDNA molecule into nucleoid structure (16). Mitochondria possess their own proteolysis system, which processes defective protein molecules. At the same time, degradation of damaged mitochondrial outer membrane proteins is proteasome-mediated. Mitochondria are dynamic organelles capable of fission and fusion, which also helps their repair. Damaged beyond repair, mitochondria normally are cleared from the cell by a lysosome-driven mechanism similar to autophagy (mitophagy). Together, these processes ensure the mitochondrial homeostasis within the cell (17).

Mitochondrial dysfunction and atherogenesis are related through metabolic disbalance, oxidative stress, and inflammation. Inflammation caused by exogenic factors can be complemented by possible immunogenic properties of defective mitochondria, considering their endosymbiotic origin, which is confirmed by a number of studies (19). Free mtDNA released by defective mitochondria under certain circumstances is recognized by the cell as an antigen, which, via interaction with cGAS receptor in the cytoplasm, activates IFN-1-dependent antiviral cascade, although normally, mtDNA in the cell cytoplasm is immunologically neutral (20). Despite a considerable body of experimental data, causality between oxidative stress and cardiac ageing is not yet definitive (8).

5. CONTRIBUTION OF ROS TO ATHEROSCLEROSIS

Thioredoxin-1 (Trx-1), a critical component of cellular antioxidant system was found to polarize macrophages towards alternatively-activated (M2) phenotype, as opposed to the classically-activated, pro-inflammatory (M1) phenotype. This had a protective effect against atherosclerosis in animal models. However, Trx-80 studied in the same experimental model had an opposite effect, inducing M1 polarization of macrophages and promoting atherosclerosis (25). Moreover, transcriptional factors FOXOs, that regulate multiple physiological and pathological processes, display similar behavior. FOXO3a has a protective effect in cells under oxidative stress, but sustained activation of FOXO3a leads to apoptosis in hematopoietic cells and promotes atherosclerosis (26). 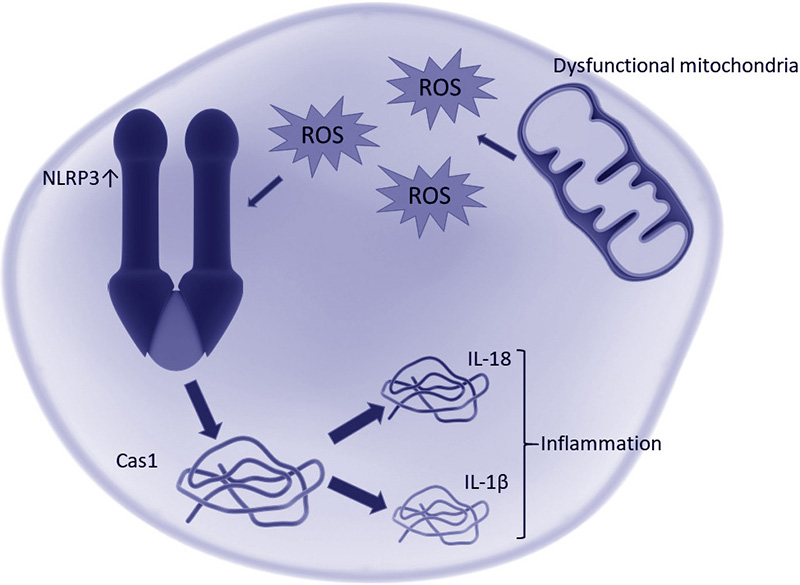 Mitochondria and the endoplasmic reticulum (ER) show an interplay during cellular response to oxidative stress and inflammation. The ER contributes to oxidative stress by generating ROS via NADPH oxidase 4 (NOX4). Mitochondrial ROS can induce the ER stress further increasing ROS formation (29). Interestingly, NOX4 plays a protective role in atherogenesis, but NOX1 is proven to contribute to atherosclerosis-related oxidative damage (30). Contacts between mitochondria and the ER are called MERCs (mitochondria-ER contacts) and represent several nanometer-long prolonged structures. Disrupted functionality of MERCs is associated with a variety of pathologic conditions. Elevated cholesterol levels in the ER of macrophages leads to ER stress and apoptosis, and furthermore MERCs are potential contributors to the inflammasome-related inflammatory response in cardiovascular diseases, activating inflammasome molecular complex (31). Molecular basis of MERCs, as it is understood now, is a physical connection between two organelles and formation of mitochondria-associated membranes (MAMs), which are comprised of fragments of mitochondrial outer membrane and ER membrane fragments. Furthermore, NLRP3 is the only inflammasome molecular complex associated with MAMs (32). Mitochondria are involved in macrophages apoptosis, which is one of the key molecular events in the disease progression. It was found that palmitate is able to induce oxidative stress and mitochondrial dysfunction, possibly through uncoupling of mitochondrial respiratory chain (33). Thus, under pathologic conditions, components of fatty acid oxidation system may alternate mitochondria functionality shifting the accent from ATP production to fatty acid-induced generation of ROS and subsequent activation of NLRP3 inflammasome (34).

Defects in mitochondrial homeostasis are linked to cardiovascular diseases development and progression. Fission and fusion of mitochondria are especially interesting in this regard, as decreased expression of key regulators of these events MFN1 and MFN2, promotes atherosclerosis, cardiac hypertrophy, cardiomyopathy and heart failure in animal models (35). Various molecular components of mitophagy display opposing effects on cardiovascular diseases progression: Parkin, PINK1 and PGAM5 act as protectors and prevent damage, while FUNDC1, MFN1 and MFN2 in the absence of BNIP3 have the opposite role (36).

Gaseous signaling molecules, such as NO, CO, and H2S and are long-known mediators of various cell activities, including maintaining cardiovascular system functionality. It was found that mitochondria are largely responsible for producing H2S, containing two thirds of 3-mercaptopyruvate sulfurtransferase. Furthermore, mitochondrial metabolism mediates M2 macrophage polarization induced by H2S (39).

Uncoupling protein-2 (UCP2) is one of the major mitochondrial regulators of ROS production that has a direct role in atherosclerosis development. A significant body of evidence suggests that lack of UCP2 leads to various atherogenic events in animal models, while activation of UCP2 expression has a beneficial effect in models of hyperglycemia and dysfunctional endothelium (40). However, another uncoupling agent, oleic acid, was found to induce atherogenesis through inflammasome-independent IL-1α release (41).

Mitochondria and circulating mtDNA have been identified as important sources of DAMPs. Accumulation of damaged mtDNA in circulation is one of the factors promoting atherosclerosis (42). Since mtDNA lacks histones and has relatively poor repair mechanisms, it is more vulnerable to oxidative damage than genomic DNA. Mutations induced by ROS in mtDNA further promote ROS production, thus creating a vicious cycle. If the concentration of free mtDNA reaches the critical limit, it can trigger the inflammatory response pathways leading to inflammation-associated pathologies. Reportedly, high levels of mtDNA damage are present prior to atherosclerotic plaque development and continue to increase during the plaque progression. Therefore, a positive correlation between mtDNA damage and atherosclerosis is observed (43). Damaged mtDNA alone seems to be sufficient to reduce mitochondrial respiration leading to atherosclerosis in humans and mice. Reduction of mtDNA copy number is a marker of atherosclerotic plaques (44).

It is now clear that many human diseases result from the disruption of energy production due to defects in mtDNA or defects in the nuclear-encoded genes which are responsible for the mitochondrial maintenance (38). Consistent with the available data, mitochondrial dysfunction also leads to atherogenesis. Existence of mitochondrial defects and release of mtDNA into the circulation can be established clinically for detection of circulating free mtDNA and identification of mtDNA mutations that underlie increased ROS production. Strategies that remove the defective mitochondria might allow reducing the ROS overload and hence ROS mediated atherogenesis. Moreover, assays based on free mitochondrial DNA analysis can potentially be developed and then utilized for diagnostic purposes opening a way for creating mitochondria-oriented diagnostic procedures for detecting cardiovascular pathologies, diabetes, cancer and other socially significant diseases.

Reduction of the oxidative stress has long been considered as promising therapeutic strategy for treatment of atherosclerosis. However, numerous clinical studies failed to demonstrate the efficacy of widely used antioxidants, such as vitamins C and E or folic acid against atherosclerosis progression (17, 46). This could be due to the lack of standardization in assessing the oxidative stress in human subjects and by the complex nature of the pathology. Targeted approach aiming to reduce the oxidative stress at the level of mitochondria appears therefore more interesting. Several such agents are being tested currently in preclinical and clinical studies (47-49).

Risk factors of atherosclerosis, such as smoking, unfavorable blood lipid profile, low physical activity, diabetes and obesity, are linked to enhanced ROS production by mitochondria. Atherogenic modification of LDL particles and accumulation of modified LDL is also related to mitochondrial dysfunction. Atherosclerosis-related inflammatory response can be influenced by mitochondria directly and indirectly. Indirect mechanism involves activation of inflammasome by mitochondrial ROS followed by release of interleukins. Moreover, mitochondria themselves can serve as immunologic stimuli, releasing damaged mtDNA into circulation and promoting further atherogenic events. The relationship between oxidative stress and atherosclerosis development is less straightforward: certain molecular interactions proven as beneficial in some studies are deleterious under different conditions, and in this review, we show several examples of such inconsistency. This highlights that Oxygen paradox, with oxygen being both savior and killer, is important for our understanding of atherosclerosis pathogenesis and mitochondrial pathology in general.

This work was supported by the Russian Science Foundation (Grant # 19-15-00010). The authors declare no conflict of interest.