Uterine lipoleiomyoma is a rare benign type of uterine leiomyoma with an incidence ranging from 0.03% to 0.2%, which is most common in the uterine corpus [1]. Malignancies arising from the tumor have rarely been reported though it is considered benign [2, 3]. Herein, we report three cases of uterine lipoleiomyoma in our institution with a literature review for deeply understanding of etiology, characteristics, differential diagnosis and malignant transformation potential of the tumor.

Three cases of uterine lipoleiomyoma were identified in Tianjin Medical University General Hospital. Serum level of cancer antigen 125 (CA125) and human epididymis protein 4 (HE4) of all patients were within normal value. All patients have a good recovery without recurrence.

A 58-year-old postmenopausal woman presented with vaginal bleeding to hospital. Serum level of total cholesterol was a little higher than normal value. TVS revealed a media-hyperechoic mass arising from the fundus uteri (Fig. 2a). The patient underwent TLH and BSO, and a yellow oval-shaped mass measuring 1.5 1.4 1.7 cm was found (Fig. 2b). Uterine lipoleiomyoma with uterine endometrial hyperplasia changes was made for diagnosis by histopathology (Fig. 2c). 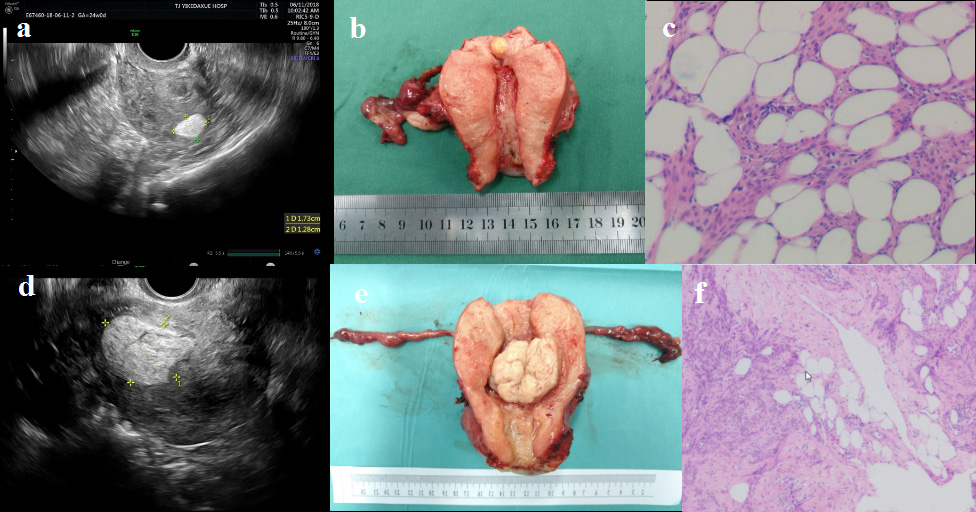 A 45-year-old perimenopausal woman presented with complaints of hypermenorrhea, who had a history of uterine leiomyoma for 2 years. Multiple hypoechoic masses and a media-hyperechoic mass arising from the inferior aspect of the uterine corpus were shown on TVS (Fig. 2d). The patient underwent a total abdominal hysterectomy (TAH) and bilateral salpingectomy (BS), and a well-defined soft yellowish mass measuring 5.7 5.2 3.4 cm was found (Fig. 2e). Histopathology report showed uterine lipoleiomyoma for diagnosis (Fig. 2f).

The electronic medical database PubMed was used for research, combining the following terms: (“lipoleiomyoma” or “myolipoma”) and (“uterine” or “uterus”). Up to now, approximately 240 cases of lipoleiomyoma of uterine corpus have been reported in English literature. Relative complete clinical and imaging data (the items listed in Table 1) were available in 24 cases that include manifestation, medical history, imaging examinations (ultrasound and at least one of computed tomography (CT) or MRI), treatment, etc. To better understand the characteristics of this tumor, herein we make a literature review with these 24 cases [1, 4, 5, 6, 7, 8, 9, 10, 11, 12, 13, 14, 15, 16, 17, 18, 19, 20, 21, 22, 23, 24] plus our 3 cases.

Table 1.Characteristics of 27 cases of lipoleiomyoma in the uterine corpus.

Table 1 showed characteristics of 27 cases of lipoleiomyoma in the uterine corpus. The age at diagnosis of uterine lipoleiomyoma ranged from 39 to 80 (mean 60) years. The symptoms were similar to those of leiomyoma. CA125 levels of two patients were higher than normal range, and they were preoperatively misdiagnosed as liposarcoma and leiomyosarcoma respectively [12, 14]. Seventeen of the 27 patients showed a well-defined homogenous hyperechoic mass on ultrasound. Nineteen patients underwent CT that the result of a well-circumscribed heterogeneous hypodense mass accounted for 63% of all. A half of 16 patients showed a heterogeneous signal mass, and the signal suppressed in all FS images on MRI. Patients underwent a variety of treatments. Seven patients didn’t choose invasive excisions mainly due to the preoperative diagnosis. Two of the seven patients were diagnosed by histological examination of a core needle biopsy specimen and another five only based on clinical and imaging features. Follow-up was available for 14 patients and no recurrence was reported. But an 80-year-old patient preoperatively misdiagnosed as a liposarcoma died of catastrophic postoperative complication 10 days after surgery [12]. This case suggests that surgery should be seriously considered for elderly and high-risk patients despite suspicious malignancy, and a sample needle biopsy may be helpful to identify [13, 16].

The histogenesis of lipoleiomyoma is controversial. Traditionally, the adipose tissue element of lipoleiomyoma is thought to be derived from degeneration of leiomyoma. Recently, immunohistochemical studies support a complex histogenesis of lipoleiomyoma that it might arise from lipomatous metaplasia of the smooth muscle cells of leiomyoma, or the direct transformation of smooth muscle cells into adipocytes that may originate from the transformation of a totipotent mesenchymal cell [1, 5, 25]. Positive vimentin, estrogen (ER) and progesterone (PR) can be seen in both elements, as well as negative pancytokeratin (AE1/3, CAM5.2), MDM2, CDK4, p53, CD34 and KIT. Respectively, the adipose cells are strongly positive for S-100 protein, and strongly positive -SMA and desmin are found in the smooth muscle cells [26].

There have been some findings reported about the etiology. Hyperestrogenic associated lesions coexist with the lipoleiomyoma like other leiomyoma in some patients, such as endometriosis, adenomyosis, endometrial hyperplasia, polyps and related malignancies, which may contribute to the development of lipoleiomyoma [25]. Lipoleiomyoma may also be associated with some metabolic disorders such as hyperlipidemia, hypothyroidism, and diabetes mellitus [2, 25]. It is consistent with our review findings that nearly 30% of patients were related to abnormal lipid metabolism and most of them were postmenopausal [4, 8, 11, 14], which suggests that increased risk of abnormal lipid metabolism associated with oestrogen deficiency after menopause transition may facilitate the development of lipoleiomyoma.

However, whether malignant transformation can occur in lipoleiomyoma is controversial. Four cases have been reported about uterine liposarcomas or leiomyosarcomas with lipoleiomyomatous component up to now [2, 3]. In these four malignancies, patients ranged in age from 49 to 70 (mean 62) years and presented with abnormal uterine bleeding (1/2), enlarged uterus (3/4) and lower abdominal mass (1/4). TAH and BSO were performed for all patients. Partial vaginectomy and appendectomy were also respectively performed for the metastasized case and the case with a carcinoid tumor in the appendix. In gross, all tumors were centered in the myometrium ranged in size from 10 to 18.5 (mean 12.4) cm with well-circumscribed pushing margins. One tumor had a vaginal metastasis nodule in size of 3 cm [2], other findings included multiple leiomyomas, ovarian stromal hyperthecosis, and a carcinoid tumor in the appendix [3].

Histopathologically, in addition to the malignant features of liposarcoma or leiomyosarcoma, three of the malignancies merged imperceptibly with a lipoleiomyoma (two typical and one atypical), another was consistent with a well-demarcated infarcted lipoleiomyoma contained by it. In three cases, the findings were further confirmed by immunohistochemical analysis using S100, desmin, h-caldesmon and MDM2. Follow-up was available for three patients, and they were alive and free of disease for 1, 2 and 20 years after surgery respectively at the last time [3]. Tumor markers and imaging findings were not mentioned with emphasis in these four cases, but some related features of liposarcoma and leiomyosarcoma have been reported in other literature that is helpful for the differential diagnosis. Well-differentiated liposarcoma may confound diagnosis of lipoleiomyoma because of the fatty nature on MRI. T1-weighted images show a predominantly high signal mass containing multiple nonuniformly thickened or partially nodular septa of low signal in the well-differentiated liposarcoma of uterus. The septum is enhanced on T1-weighted, fat-saturated, and gadolinium-enhanced imaging [27]. Reportedly, well-differentiated liposarcomas are diagnosed with 100% sensitivity and 83% specificity when the following three features are present on MRI: a thickened or nodular septum (generally 2 mm), areas of enhancement, and areas of high signal on T2-weighted imaging [28]. Leiomyosarcomas (LMS) show small heterogenous focal/multifocal areas of increased high signal on T1-weighted images and non-suppressed signal on FS images, which suggests focal hemorrhage or coagulative necrosis in LMS rather than intralesional fatty tissue of lipoleiomyoma. Additionally, an area of central non-enhancement on contrast-enhanced MRI can also differentiate hemorrhage or necrosis in LMS, as well as higher grade liposarcoma. There is no consensus on the utility of CA125 in the diagnosis of uterine sarcoma [29]. A high serum lactate dehydrogenase (LDH) level may be related to LMS but lack specificity [30]. The pathogenesis of malignancy transformation in lipoleiomyoma is unclear. The origin of sarcomas arising from preexisting leiomyomas was confirmed by positional relationship and certain genetic alterations between the two different tumor components [31, 32]. Some studies have shown that leiomyoma-like areas can be seen associated with uterine leiomyosarcoma that nearly all the genetic aberrations found in leiomyoma-like areas were also found in the corresponding uterine leiomyosarcoma areas, raising the possibility of precursor lesions for uterine leiomyosarcoma [33]. Similarly, sarcomatous transformation from lipoleiomyoma may be the most likely origin of these 4 cases. Sarcomas arising from lipoleiomyoma is difficult to diagnose preoperatively, especially in the early stage. In addition, lipoleiomyoma should be differentiated from other uterine wall tumors with malignant potential, such as uterine perivascular epithelioid cell tumor (PEComa), which reveals similar heterogeneous echogenicity but significant vascular modifications characterized by a rich central vascular network in Color Doppler [34]. Sample needle biopsy can be considered, and a preoperative diagnosis of the tumor may be improved using a combination of clinical, imaging and histological findings [13, 16, 30]. But the biopsy specimens are very small and the diagnosis may be underestimated. In view of the potential malignancy risk, if surgical treatment was opted for, intraoperative frozen section should be emphasized as it is a very useful aid to decide the extent of surgical management and postoperative histological examinations should be carefully performed. In addition, it is worth discussing whether aggressive surgery should be considered more for treatment options of the giant lipoleiomyomas (10 cm) or rapid growth cases. Follow-up with clinical and imaging features is still necessary especially for patients without radical operations. There have only four cases been reported about malignant transformation in lipoleiomyomas and further studies remain to be done.

Uterine lipoleiomyoma is a rare benign lipomatous variant of uterine leiomyoma, typically found in peri or postmenopausal women. The histogenesis of the tumor remains controversial. Symptoms are generally similar to uterine leiomyoma. Imaging examinations especially MRI played an important role in preoperative differential diagnosis. There is no reliable method of preoperative diagnosis of uterine lipoleiomyoma. For large size and rapid growth of lipoleiomyoma, malignant transformation potential of the tumor should be considered and surgery is required. Follow-up is still necessary.

GL and YW conceived the report. YW and XZ contributed to manuscript writing, YS and LW were involved in the data collection. All authors read and approved the final manuscript.

The patients have given their written informed consent to publish their case. All clinical information and images used in this paper were approved by the ethical committee of Tianjin Medical University General Hospital.

We would like to thank Xiaohui Yang and Haiwei Dong for their assistance in ultrasound examination.