Tamoxifen is a nonsteroidal selective estrogen receptor modulator that is widely used for the treatment of estrogen receptor-positive breast cancer patients [1,2]. Clinical trials have shown that long-term therapy for at least 5 years, is more effective than short-term treatment (2 years). Although it acts as an antiestrogen in breast tissue [3], it has a partial agonist effect on other tissues, such as the endometrium and myometrium [4]; hence, prolonged therapy is associated with various uterine pathologies, including endometrial polyps, submucosal leiomyomas, endometrial hyperplasia, and endometrial cancer [5-8]. However, literature background showed that the benefits achieved in breast cancer treatment, may overcome any potential uterine abnormalities that may occur [9]. In this scenario, it is emerging the necessity to develop adequate methods to diagnose endometrial complications. Nevertheless, the optimal method of surveillance has not yet been determined [6,9-11].

Transvaginal sonography (TVS) is the imaging technique of choice for first-line investigation of intrauterine abnormalities [12-14]. This procedure is relatively painless, well accepted by patients, and can be easily performed by the gynecologist at a relatively low cost [15]. Nevertheless, several studies reported a limited value of TVS in tamoxifen-treated patients due to false-negative [16] as well as false positive results [10,15] and proposed additional diagnostic procedures, such as hysteroscopy (HS) or transvaginal saline infusion sonohysterography (SIS).

HS, combined with histological examination of an endometrial aspiration or biopsy, remains the current gold standard for uterine cavity assessment [16-19]. Moreover, it represents a highly effective therapeutic approach to treat various conditions [20] and it can be useful to assess their eventual recurrence [21]. However, discomfort due to anatomical impediments may represent a cause of office hysteroscopy failure, requiring the necessity for anesthesia and operating theater [22]; a fact that increases both risks and costs. Furthermore, it should be performed by a gynecologist with enough facilities and expertise [23].

In the last 20 years, several studies have proposed the use of SIS, as a less invasive alternative to HS [22,23]. Indeed, it is an affective “add-on” to TVS which involves the use of slow instillation of sterile saline solution into the endometrial cavity through a 5-French catheter under continuous TVS guidance, providing both a contrast medium and an expanding agent [24]. Along this line, sensitivity, specificity, and predictive values of SIS are clearly superior in comparison to TVS. Moreover, SIS is associated with minimal discomfort and lower costs, being easily performed by most of gynecologists [25-29]. With regards to contraindications, only few has been reported in literature [30] eventually leading to no potential complications. Finally, it can accurately differentiate focal lesions such as polyps and submucous fibroids [31,32] from diffuse lesions like hyperplasia and cancer [26,30]. Conversely, although the use of HS in detection of intrauterine alteration has widely gained a strong agreement [33], there is a trend towards encouraging the use of SIS as primary method to detect endometrial abnormalities also related to tamoxifen use [32-39].

Given this, the aim of the current review is to evaluate the incidence of endometrial diseases in tamoxifen-treated breast cancer patients identified by HS and SIS and the diagnostic accuracy of the two methods to detect them.

A systematic review of the literature concerning the role of HS and SIS for evaluation of the endometrium in tamoxifen-treated breast cancer patients was performed. We searched MEDLINE (PubMed), EMBASE, Cochrane Central Register of Controlled Trials, IBECS, BIOSIS, Web of Science, SCOPUS, congress abstracts, and Grey literature (Google Scholar; British Library). The following keywords were used: “hysteroscopy”,“hysterosonography”,“sonohysterography”. These terms were further combined with “tamoxifen”.

2.2 Screening of abstract for eligibility

According to all Authors, the inclusion or exclusion of studies were established at first. Two investigators (F.D.G. and G.G.I.) screened abstracts and titles of the research. A third investigator (G.D.) screened the abstract and the title in case of disagreement.

Our systematic search strategy identified a total of 222 citations, after screening of abstracts and titles and removal duplicates, 89 records were identified and selected, finally 28 studies were included in the systematic review (Fig. 1). There were 61 citations excluded because they were review articles (n = 9) or case report (n = 5) and non-English articles (n = 8), and had too little information in the full text (n = 39). The selection process of suitable studies is displayed in Fig. 1. 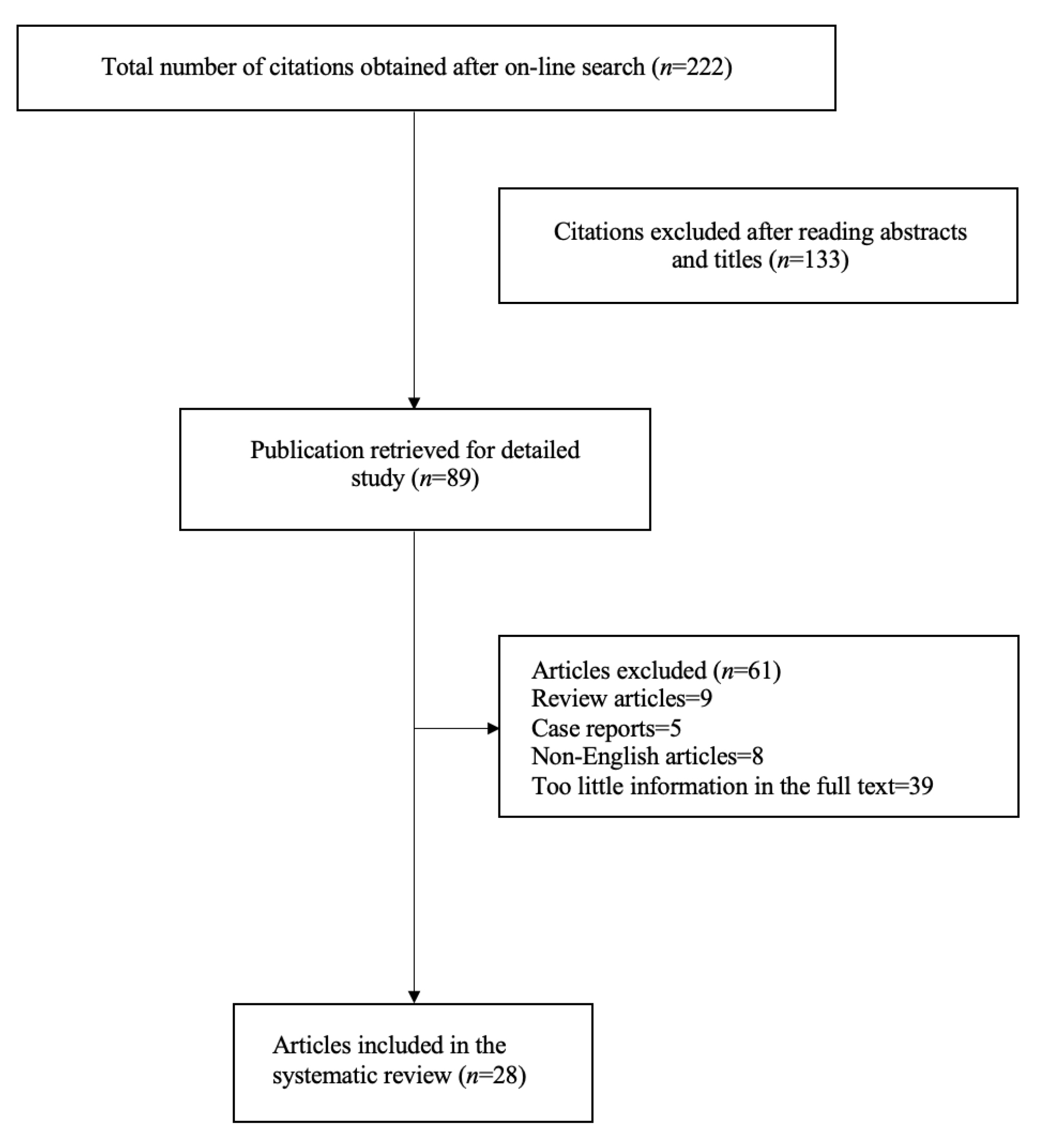 Selection process for the inclusion of suitable studies for the systematic review.n, number.

The first large, prospective study showing the association between endometrial cancer and tamoxifen intake was the National Surgical Adjuvant Breast and Bowel Project (NSABP) B-14 trial [6] published in 1994. Subsequent studies showed the incidence of endometrial lesions in tamoxifen-treated breast cancer patients ranges from 15.6% to 62.2% [10,38,44,56,62,65,66], in agreement with our mean incidence (38.7%).

The long-term endometrial sequels of prolonged tamoxifen treatment necessitate adequate endometrial monitoring for women on tamoxifen therapy. However, what is the most effective and acceptable procedure is controversial [6,9-11]. TVS is widely used for endometrial assessment [13]. Nevertheless, considering that some studies showed a high incidence of false-negative [16] and false positive [10,15] findings in tamoxifen-treated patients, most investigators proposed other diagnostic procedures, such as HS or SIS.

Few studies resembling SIS role in the evaluation of uterine cavity of tamoxifen-treated cases have been published. Fong et al. [67] reviewed the spectrum of uterine findings at SIS in women with breast cancer who were undergoing tamoxifen therapy and summarized the features that can help in recognizing each lesion. A polyp appears as an echogenic mass with smooth margins that often has a narrow attachment to the adjacent endometrium and is completely surrounded by fluid and contains cystic areas. A submucosal leiomyoma is seen as a round structure arising from the myometrium with a thin, overlying echogenic endometrium. Diffuse, smooth thickening of the endometrium suggests endometrial hyperplasia. Finally, an irregular inhomogeneous mass or irregular, focally thickened endometrium is highly suggestive of endometrial carcinoma and lack of distensibility of the endometrial cavity has been described as a potential sign. In this scenario, the development of a new system is desirable for classifying uterine lesions on the basis of sonographic findings and estimating the probability of malignancy, similarly to that used for adnexal masses (GI-RADS) [68].

Some studies suggested that SIS has high sensitivity and specificity rates, ranging from 79% to 100% [60,67,69]. We compared diagnostic accuracy of SIS and HS in distinguish between normal and abnormal endometrium in postmenopausal tamoxifen-treated breast cancer women, founding similar results between the two methods.

Several studies have compared HS with SIS, some of which demonstrated that SIS can detect lesions not seen by HS. Hann et al. [62] found that 5 of 31 endometrial polyps diagnosed using SIS were not confirmed by HS despite their classic appearance. Similar results were shown by Schwärzler et al. [70], who reported that HS missed 2 of 25 polyps detected using SIS. In patients with positive endometrial features by basal SIS, postoperative SIS identified endometrial polyps, which were histologically verified in 16/22 (72%) patients. Although the study patients constituted a selected group, the rate of endometrial pathologies, primarily endometrial polyps, was still very high, especially when compared with other documented studies in literature not using SIS [40,46,70,71]. This high rate concurs with the findings of Achiron et al. [72], who performed SIS in a group of 20 tamoxifen-treated patients and identified endometrial polyps in 8 (40%) of them. Bourne et al. [73] also claimed that SIS revealed a higher proportion of polyps in such patients. In 46 patients who had no specific basal endometrial features by SIS, no endometrial polyps were identified by HS. Thus, SIS yielded no false-negative findings, and its accuracy was not significantly different from the accuracy of HS.

Moreover, SIS is virtually devoid of complications [82]. HS complications are rare, but if left unrecognized can become life threatening. The overall complication rate of the latter procedure is 0.28% and uterine perforation is its most common complication (0.13%) [83].

Patients undergoing tamoxifen are often those that have been received a surgical treatment for breast cancer and that may probably benefit (also psychologically) of SIS as a less invasive alternative to HS. Timmermann et al. [66] compared the acceptability of the two methods, including 52 patients with breast cancer who had taken tamoxifen and underwent HS and/or SIS. When asked which test patients would prefer to have in the future, 68% opted for SIS and 21% opted for HS. Garuti et al. [64], showed that pelvic pain experienced by breast cancer patients taking tamoxifen at HS was not significantly higher than in the group of women underwent SIS, although the trend favors the latest approach.

A study by Saidi et al. [84] showed that the average cost for SIS was $195 and the cost for HS was $675, concluding that SIS may represent a cost-effective alternative to HS.

In conclusion, long-term tamoxifen use for the treatment of breast cancer seems to be associated with an increased incidence of endometrial polyps, submucosal leiomyomas, endometrial hyperplasia, and endometrial cancer. Adequate monitoring of endometrial response to tamoxifen in these patients is crucial. We showed similar accuracy between SIS and HS in detection of endometrial tamoxifen-related lesions. Along this line, SIS may represent a minimally invasive, simple, safe, well-tolerated and cost-effective alternative to HS, associated with few contraindications and no potential complications.

We express our gratitude to Dr. Maria Cecilia Cerana for the native English language revision.

The authors declare no conflict of interest. MP is serving as one of the Editorial Board members of this journal. We declare that MP had no involvement in the peer review of this article and has no access to information regarding its peer review. Full responsibility for the editorial process for this article was delegated to Prof. Enrique Hernandez.

Selection process for the inclusion of suitable studies for the systematic review.n, number.