Over 95% of primary small cell carcinomas (SCC) occur in the lungs, and a small number of primary SCC originate in the genital tract. SCC accounts for only 1%–2% of all gynecological malignant tumors [1]. It occurs most frequently in cervix and rarely in the vagina. Most of the patients die within 1 year of diagnosis [1]. After searching the PubMed and MEDLINE database, we found only 39 reported cases [2-30] of primary vaginal small cell carcinoma (SCCV) and the current managements have usually resulted in poor outcomes, however, due to the rarity of the lesion, there is no standard guideline of treatment.

A 51-year-old woman complaining of vaginal discharge was admitted to the hospital in December 2017. She had no significant medical history. Thin-prep cytology test of cervix was benign and HPV DNA assaywas negative. The special tumor marker of SCC, neuron specific enolase (NSE), and other tumor markers such as squamous cell carcinoma antigen were almost normal. The physical examination showed a neoplasm about 2 cm in the posterior fornix of vagina. Hematoxylin-eosin (HE) staining of biopsy tissue was consistent with malignancy (Fig. 1). The immunohistochemical stains demonstrated positivity for chromogranin A (CgA) and synaptophysin (Syn) (Fig. 2). The MRI film of the pelvis showed that the lymph nodes were not enlarged. PET/CT scans were negative for metastatic diseases. 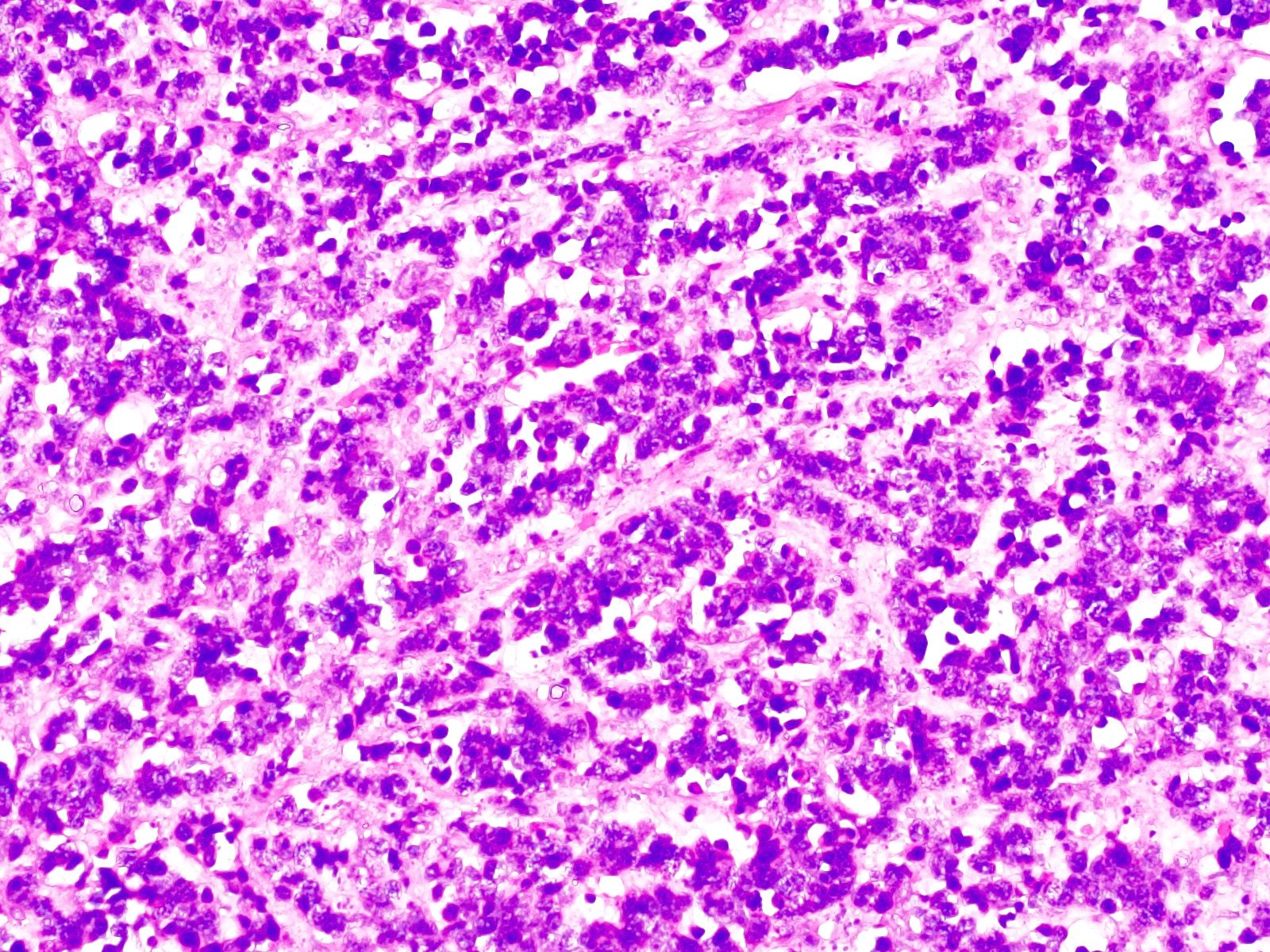 Immunohistochemical stains under light microscope. It shows chromogranin A expression (A) and synaptophysin expression (B) (Original magnification 400).

Subsequently she underwent radical hysterectomy with partial vaginectomy, bilateral salpingo-oophorectomy and pelvic lymphadenectomy. Gross examination of the specimen found the greatest tumor width was 2 cm with invasion of deep soft tissue. Microscopy showed the tumor deeply infiltrated all layers of the vaginal wall but didn’t extend beyond tunica adventitia to paravaginal tissue, and cancer thrombus was found in vessels. Lymph nodes and vaginal margins were negative. Immunohistochemical analysis was consistent with the earlier results. Finally, clinical stage I (T1N0M0) SCCV was confirmed. Postoperatively she received etopside a dose of 100 mg/m and cisplatin at a dose of 60 mg/m every 3 weeks for 6 courses, followed by external beam radiotherapy to the pelvis, 45 Gy in 25 fractions. Eight months after initial visits, her MRI of the pelvis demonstrated no evidence of local recurrence or distant metastases. She has remained clinically free of disease of 36 months since surgery.

An asymptomatic 44-year-old woman was found to have a 2 2 cm, right-sided, firm vaginal polypoid mass in October 2019. She had no signifificant medical or surgical history. Neuron specific enolase (NSE) was normal. A biopsy was consistent with a small cell malignant neoplasm. A MRI of the pelvis confifirmed the presence of a vaginal mass arising from the right side of the vagina and a lymph node near the right side of upper vagina (Fig. 3). CT scan of lungs and Papanicolaou test were negative. A MRI film of the pelvis. The vaginal mass arising from the right side of the vagina shows slight high signal in T2WI.

The first case of SCCV was reported by Scully et al. [30] in 1984. SCCV is extremely aggressive and rarely reported with only 39 patients found in our search of the PubMed and MEDLINE database. SCCV may be asymptomatic with a lesion in vagina but usually manifest with postmenopausal bleeding or vaginal discharge. They may also manifest with symptoms due to metastasis, such as abdominal pain, and hemoptysis. Though it has been well known that SCC of cervix are associated with human papilloma virus (HPV) especially HPV 16 and18 infections, there is not definitive evidence to show that SCCV is related to HPV infection, because only one case [3] of SCCV reported HPV status.

The histologic appearance of SCC under light microscopy is small cells with round or oat-shaped nucleus, scant cytoplasm and deeply stained nucleoli to differentiate SCC form other tumors appearing as small blue cells such as lymphoma and sarcoma, immunohistochemical analysis is often performed. The positivity of neuroendocrine markers CD56, neuron-specific enolase (NSE), chromogranin A (CgA) and synaptophysin (Syn) are significant for diagnosis. As reported by Bing et al. [14], 7 cases were subjected to NSE and Syn, and all showed positivity. CgA was performed in 8 cases with 7 positive and 1 negative. The negativity of lymphocytotoxic antibody helps to exclude lymphoma. Thyroid transcription factor 1 (TTF-1) is a sensitive marker for SCC of pulmonary origin, but the expression in urinary bladder, uterine cervix and vagina has also been reported [14,31], in other words, it is not specific enough to distinguish primary SCCV and SCC metastatic from the lung. Though the HE and immunohistochemical staining patterns of SCC in different parts of genital tract are similar [32], SCC metastatic from cervix or lung must be excluded before SCCV diagnosed. Thus clinical evaluation combined with radiographic examination and ThinPrep cytologic test (TCT) is necessary to determine whether there are cervical or pulmonary lesions.

Currently most studies about SCCV are case reports and there is no standard guideline for treatment. With the neuroendocrine phenotype, the management strategies for SCC of female genital tract are often adopted from strategies for SCC of the lung [32]. A clinical document about SCC of genital tract released by Society of Gynaecologic Oncology in 2011 suggested that the approach to managing SCC of the cervix could be extrapolated to SCCV. Radical excision was suggested in early-stage disease, and chemo-radiotherapy with platinum and etoposide is suitable for advanced cases [1]. Considering the different clinical outcomes of we reported two patients, we believe that supplementary radiotherapy and chemotherapy after surgery may be necessary for patients with early-stage disease. To date, 33 [2-5,7-9,11-15,17-28] of the 39 patients with SCCV reported in the English literature are available for clinical and pathological information. The clinical details of patients including 6 in stage I, 13 in stage II, 7 in stage III, and 7 in stage IV were showed in Table 1 (Ref. [1,3-30]). The age of all patients ranges from 32 years to 81 years and the median is 59 years. The median survival time was 12 months, ranging from 4 months to 41 months. Four patients (1 in stage I and 3 in stage II) underwent surgery and postoperative chemo-radiotherapy. When therapy finished, all of them showed a clinical complete response (CR) and were alive without disease progression when reported. A patient in stage II received chemotherapy following surgery and two patients in stage III underwent surgery alone, all of them died within 1 year. Interestingly, the median survival time of the patients receiving radiation alone (1 in stage I and 4 in stage II) was 15 months and 80% of them achieved CR. Chemo-radiotherapy was administered to 14 patients (3 in stage I, 3 in stage II, 3 in stage III and 5 in stage IV). 7 of them achieved CR and 2 achieved partial response (PR). Disease progressed in 2 of them and outcome of 3 patients was unknown. The median survival time of patients treated by chemo-radiotherapy was 8 months. Three patients underwent chemotherapy alone and one of the them reported by Hayashi et al. [17] was alive for more than 41 months with no evidence of disease, and other of them die in 8 months and 9 months of diagnose, respectively.

JZ, YL and RY conceived and designed the review. JZ was involved in the collection and collation of references. YL collected and assembled the data presented in Table 1. JZ and YL wrote the manuscript. All authors approved the final manuscript.

The Ethics Committee of the First Affiliated Hospital of Chongqing Medical University approved the study. Approval number is 2020-655. All subjects gave their informed consent for inclusion before they participated in the study.