Cervical cancer (CC) is one of the most common gynecologic tumors and is responsible for more than 300,000 deaths worldwide each year [1,2]. In developed countries, early detection through screening has led to a substantial decline in mortality from CC. However, mortality remains high in developing countries and in low-income families [2,3]. Most patients diagnosed with CC receive radiotherapy or chemotherapy, resulting in a heavy financial burden [2,4]. Furthermore, the clinical outcome varies greatly and some patients diagnosed with early stage disease later develop tumor metastasis resulting in shortened survival [5]. The molecular mechanisms that underlie the progression of CC remain unclear, thus hindering the development of more effective treatments. Hence, the identification of important pathways and molecules involved in the pathogenesis of CC will be of great significance for early detection through screening and for improved treatment.

Cancer cells are able to carry out relatively minor modifications to normal physiological processes, which can in turn result in markedly altered phenotypes. Endocytosis has been identified as one such physiological process that undergoes modification during carcinogenesis [6,7]. Many cancer cell types lose the ability to regulate the function of important growth control receptors such as epidermal growth factor receptor (EGFR) and ErbB family of receptor tyrosine kinases (RTK). These key regulators of growth cannot be internalized, recycled or degraded by the cancer cell, thereby accelerating tumor development [6-8]. The process of unregulated receptor endocytosis provides a range of potential targets for the treatment of cancer. In theory, the removal or inhibition of oncogenic proteins that are defective for endocytosis might inhibit cancer progression. Significant advances have recently been made in understanding the molecular changes that occur to the endocytic pathway during cancer progression [7,8]. A multi-subunit tethering complex called endosomal-associated recovery protein (EARP) is involved in endocytosis. This complex consists of four vacuolar protein sorting-associated (VPS) proteins that are referred to as VPS50, VPS51, VPS52 and VPS53. There is growing evidence to suggest that VPS proteins play important roles in tumor biology. VPS52 can induce apoptosis in gastric cancer and suppress the growth of this cancer type [9]. VPS53 may have multiple roles in a variety of human tumor types. For example, in human CC it can act as a tumor suppressor by regulating the apoptosis pathway [10,11]. VPS50, also known as CCDC132 or Syndetin, is another component of EARP. To date, a role for VPS50 in tumors has yet to be reported [8]. In the present study we found that VPS50 is highly expressed in various cancer types, including human CC. Knockdown of VPS50 expression inhibited the proliferation of CC cells, enhanced their apoptosis and prevented colony formation. Furthermore, molecules involved in the Stress and Apoptosis-related signaling pathway were significantly up regulated according to the Path Scan intracellular signaling array. Therefore, these results suggest that VPS50 is required for the growth of CC cells.

The colony formation assay was performed as described previously [13]. SiHa cells were seeded into 6-well plates at 200 cells/well with 2 mL of medium and grown at 37 C for 2 weeks. Cells were then fixed in 4% Paraformaldehyde, stained with 0.1% Crystal Violet (Cat# C8470, Solarbio, Beijing, China) and the total number of colonies per well was counted. Three independent replicates were counted.

2.6 Construction of the shRNA lentiviral vector and transfection

Lentiviruses expressing short hairpin RNAs (shRNAs) that target the VPS50 gene sequence (5’TCAAGAAAGCCTCAGT GAT3’) and scramble shRNA as the control were obtained from Shanghai GeneChem Co., Ltd (Shanghai, China). The corresponding shRNAs were cloned into a pGCSILgreen fluorescent protein lentiviral vector to generate recombinant lentiviral shRNA expression vectors. For the packaging of lentivirus, HEK293FT cells were co-transfected with shRNA plasmid constructs and with packaging plasmids using Fugene HD transfection reagent as recommended by the manufacturer. Lentivirus particles were purified by ultracentrifugation and endpoint dilution assay was used to determine their titer. SiHa cells seeded into 6well plates (3 10 cells/well) were infected with either shVPS50 lentivirus or shCtrl-lentivirus.

SiHa cells from logarithmic growth phase were resuspended in culture medium and seeded into 96-well plates at a density of 1.000 cells/well. Starting the next day, a Celigo Image Cytometer (Nexcelom Bioscience, Lawrence, MA, USA) was used to measure at 488 nm wavelength each day for five consecutive days, thus generating cell growth curves.

Cells were harvested and then lysed on ice with 100 L of lysis buffer for 5 min. The lysates were centrifuged at 10,000 g for 10 min at 4 C. The PathScan® Stress and Apoptosis Signaling Antibody Array Kit (Fluorescent Readout, Cat# 12923, Cell Signaling Technology, Danvers, MA, USA) was used to detect intracellular signaling molecules as per the manufacturer’s instructions. Fluorescent images of the slide were captured with the Odyssey® Infrared Imaging System (LI-COR, Lincoln, NE, USA) and spot intensities were quantified using Image Studio analysis software.

Data are shown as the mean SD. Two-tailed t-test was used to compare results for two groups. A p-value of 0.05 was considered to show statistical significance. Experiments were independently repeated at least three times.

To examine the role of VPS50 in oncogenesis, VPS50 expression and mutation in various cancer types was investigated using published datasets. Data from the cBioPortal database (http://www.cbioportal.org/) showed high VPS50 expression in adrenocortical carcinoma, bladder urothelial carcinoma, invasive breast carcinoma, CC, glioblastoma, lung adenocarcinoma and ovarian serous cystadenocarcinoma, but low expression in gastric adenocarcinoma (Fig. 1A). Various genetic alterations to VPS50 were also found in these cancer types, including gene amplification, point mutation and fusion, (Fig. 1B), with the former being the most frequent. The highest mutation frequency for VPS50 was found in gastric cancer, followed by lung cancer. Approximately 2% of all VPS50 mutations occurred in CC. The above results indicate that VPS50 may play a role in various cancer types. To investigate a potential role for VPS50 in CC, qPCR was carried out on two CC cell lines, Hela and SiHa. This confirmed that VPS50 was expressed at a high level in CC (Fig. 1C).

To examine the function of VPS50 in CC, SiHa cells were infected with lentivirus that expressed shRNA directed against VPS50 (shVPS50), or with lentivirus that expressed a non-target control shRNA (shCtrl). This generated cells lines with stably repressed VPS50, and control cells with normally expressed VPS50, respectively. qRT-PCR assays showed the VPS50 mRNA level was significantly reduced by 50% in shVPS50-treated SiHa cells compared to shCtrl-treated SiHa cells (Fig. 2A). Moreover, VPS50 protein levels were also reduced in shVPS50 SiHa cells (Fig. 2B). These results indicated that lentivirus-mediated shRNA silencing efficiently inhibited the expression of endogenous VPS50 in SiHa cells at both the RNA and protein levels. 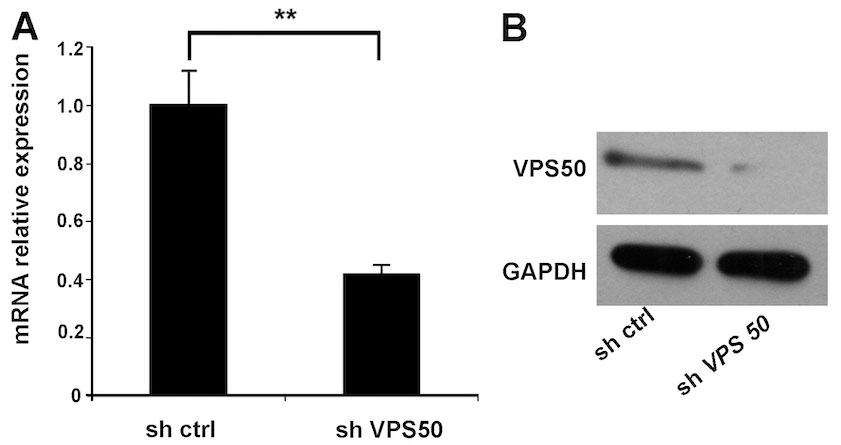 Effect of VPS50 knockdown on the proliferation of SiHa cells. (A) Representative images of SiHa cells infected with either shCtrl or shVPS50 at different time points. (B,C) Proliferation data are shown as cell numbers (B) and fold-changes of cell numbers (C). Triple experiments were performed. Values were represented as mean SD. n = 3, **p 0.01, 2-tailed t-test. A better understanding of the molecular mechanisms that underlie the progression of CC could lead to development of more effective therapies for this disease. Recently, many studies have implicated endocytosis in the development and progression of cancer. Further research into this process may therefore uncover potential targets for the treatment of CC [6,7]. Endosomal associated restorer protein (EARP) is a vital component of the endocytic pathway. Two of its subunits, VPS52 and VPS53, have already been identified as having important roles in tumor development [8,14-16]. However, the role of the most recently identified ERAP subunit, VPS50, remains unclear and only a few studies have so far been reported. VPS50 is expressed at high levels in T cells from atopic dermatitis and may be involved in the aetiology of this disease [14]. VPS50 is also expressed in neurons, where it may regulate vesicle acidification and therefore have a role in synaptic function. Functional mutations in VPS50 may also contribute to neurodevelopmental disorders [15,16]. Cancerous pancreatic ductal fluid contained increased levels of VPS50 compared to normal pancreatic ductal fluid, suggesting it may also play a role in this cancer type [17]. By analyzing public data, the present study found high levels of VPS50 expression in adrenocortical carcinoma, bladder urothelial carcinoma, invasive breast carcinoma, CC, glioblastoma, lung adenocarcinoma and ovarian serous cystadenocarcinoma, but low levels in gastric adenocarcinoma. It is worth noting that various genetic alterations to VPS50 have been reported in these tumor types, including gene amplification, point mutation and fusion. Amongst these, gene amplification is the most frequent alteration. Together, these findings suggest VPS50 may have an important role in tumorigenesis. Whether VPS50 expression or genetic alteration is associated with the clinical outcome of cancer patients requires further investigation.

The present results revealed a potential role for VPS50 in CC. Using lentivirus-mediated shRNA knockdown, it was demonstrated here that VPS50 is required for CC cell growth. Knockdown of VPS50 expression led to inhibition of CC cell proliferation, enhanced apoptosis of CC cells, and prevention of colony formation. In contrast to the apparent oncogenic effects of VPS50, two other members of the ERAP complex (VPS53 and VPS52) are thought to exert inhibitory effects on the growth of cancer cells. VPS52 induces apoptosis and acts as a suppressor of gastric cancer cells [9]. VPS53 has been shown to suppress tumor growth in human CC by regulating apoptosis pathways [10,11]. The possible reasons for these apparent functional differences between VPS proteins require further investigation, but may be due to the different cellular contexts in which they were studied. The different subunits could participate in the formation of alternate complexes depending on the cellular context.

The Path Scan Stress and Apoptosis Signaling Antibody Array was used here to investigate the molecular mechanisms by which VPS50 can affect CC cell growth. The results suggest that a large set of molecules involved in stress- and apoptosis-related signaling were significantly altered by VPS50 knockdown, including cleaved Caspase-3/7, Survivin, p-ERK1/2, p-Bad, p-p53, p-p38 MAPK and p-eIF2. Cleaved PARP-1 and cleaved Caspase-3/7 are both well-known apoptotic markers. Activation of p-p38 MAPK and p-p53 triggers programmed cell death [18-20]. In contrast, up-regulation of Survivin, p-Chk1/2, p-ERK and p-eIF2 inhibits apoptosis [21-23] in what could be a secondary reaction caused by self-rescue of the apoptotic cells. Activation of these stress- and apoptosis-related molecules following VPS50 knockdown strongly suggests that VPS50 is necessary for the survival of CC cells. However, a full understanding of the molecular mechanism involved requires further study.

This is the first report of high VPS50 expression in CC and the first to suggest this endocytosis-related protein has an important role in CC pathogenesis. Downregulation of VPS50 expression in SiHa cells resulted in the inhibition of colony formation due to decreased cell proliferation and increased cell death. The mechanism by which this occurs is through activation of the Stress and Apoptosis pathway, thus preventing the survival of SiHa cells. These results provide strong evidence that VPS50 could serve as a potential therapeutic target for CC.

ZHY and TPP designed the research study. XYH and SJJ performed the research. XYH and WYG provided help and advice on the lentivirus infection experiments. SJJ and ZYM provided help and suggestions for apoptosis experiments. ZYM and WYG analyzed the data. ZHY and TPP wrote the manuscript. All authors contributed to editorial changes in the manuscript. All authors read and approved the final manuscript.

We thank Genechem (Shanghai, China) for providing us with the lentiviral particles and technical assistance.

This work was supported by grants from the Shaoxing Bureau of Science and Technology Foundation of China (2018C30060) and Special Fund for people’s livelihood development project of Pudong New Area science and technology development (No. PKJ2017-Y34).