Human papilloma viruses (HPVs) are DNA viruses etiologically implicated in development of cervical, vaginal, and vulvar cancer and its precursors [1]. More than 200 types HPV ranging from HPV1 to HPV205 have been found and are classified as high-risk (HR) or low-risk types according to their oncogenicity [2]. HPV16 and HPV18 cause 70% of cervical cancers and cervical intraepithelial neoplasia (CIN) whereas HPV6 and HPV11 cause most of genital warts or condylomas [3,4].

Overall HPV infection prevalence worldwide was estimated to be 10% [5]. However, the HR-HPVs prevalence in women with cervical cancer was as high as approximately 95% (range, 91%–99.7%) [6,7]. Therefore, detection of HR-HPV is becoming increasingly attractive as a primary screening tool for cervical cancer because of its sensitivity and cost-effectiveness [8,9]. In 2014, the United States Food and Drug Administration (FDA) approved the first assay to be used as a first-line cervical cancer screening to detect HR-HPV in women 25 years of age or older. Approval was based on results from the Addressing THE Need for Advanced HPV Diagnosis (ATHENA) observational clinical trial that assessed HPV-alone screening in 42,209 women [10].

The 2019 American Society for Colposcopy and Cervical Pathology (ASCCP) guideline for cervical cancer screening recommends that women with negative Pap cytology but HPV16 or HPV18 positive should undergo colposcopy [11,12]. In women with cytology negative but other HR-HPVs positive except HPV16 and HPV18 types, the 2019 ASCCP guidelines recommend co-testing of Pap cytology and HPV test again in one year without the immediate referral to colposcopy [11,12]. However, this can be lead to a significant problem in the diagnosis and treatment for cervical cancer women with a false-negative error of Pap cytology. Because understanding the natural history of HPV infection is important to identify high risk population of cervical cancer and guide the prevention of cervical cancer, this study aimed to evaluate the risk of CIN grade 2 or worse (CIN2+) according to specific HR-HPV type infection in women with negative cytology.

This cross-sectional study retrospectively analyzed data of the private clinics/hospitals and health examination centers of university hospital for 29,282 women who had undergone Pap + HPV co-testing for the cervical cancer screening in Korea from January 2015 to December 2016. Colposcopic examination was carried out if co-testing revealed any abnormal results. Inclusion criteria were as follows: age between 18 and 80 years, HPV genotyping data available, and the presence of data of colposcopic cervical biopsy as the gold standard diagnostic test. Exclusion criteria were: history of operative hysterectomy, current or prior history of CIN or worse within the recent two years, or pregnant status. This retrospective study was approved by the local ethics committee of Kangbuk Samsung Hospital (Approval No.: KBSMC 2018-05-023; Approval date: 15 May 2018), and the need for written informed consent was waived.

SPSS 20.0 (SPSS Inc., Chicago, IL, USA) was used for all statistical analyses. Qualitative data were presented as frequencies (percentages) whereas quantitative variables were presented as means standard deviations (SDs) or medians (interquartile ranges) after checking for normality of data distribution. To evaluate the risk of CIN2 or worse (CIN2+) according to specific HR-HPV types, odds ratios (ORs) and 95% confidence intervals (CIs) were calculated by a logistic regression model. Statistical significance was set at p-values 0.05.

Of 33,531 women who received Pap + HPV co-testing for cervical cancer screening during the study period, 32,123 women were excluded because of follow-up screening data of identical person (n = 334), co-testing not conducted simultaneously (n = 4249), no available data of colposcopic punch biopsy (n = 24,760), or Pap cytology results of ASCUS or worse (n = 2780). A total of 1408 women with negative Pap result but HR-HPV positive were identified. However, 71 women were further excluded due to no available data about other HR-HPV genotyping. Therefore, 1337 women were finally included in this study (Fig. 1). 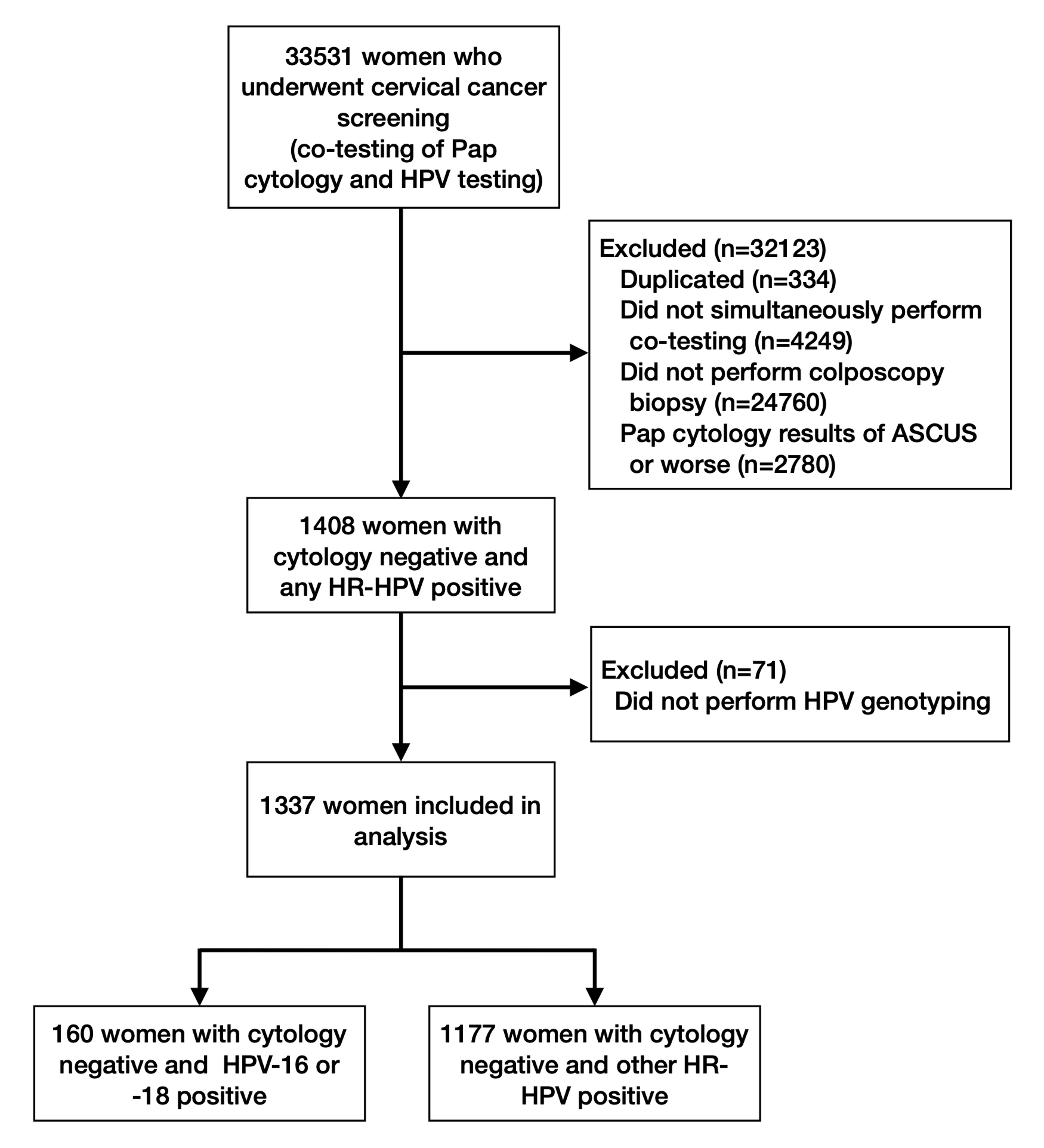 Our data confirmed the 2012 and 2019 ASCCP guideline for HR-HPV genotyping. It recommends immediate referral to colposcopy of HPV16 or HPV18 positive women with negative Pap result. Our data suggest that colposcopy should also be referred to women with multiple HR-HPVs, HPV35, or HPV58 infections. We believe that this study is very valuable because understanding the natural history of specific HR-HPV genotype infections is important to build cervical cancer screening guideline.

Cervical cancer screening strategies vary from country to country [12,16-18]. Some countries have population-based screening programs for cervical cancer, which this program can be implemented nationwide or only in specific province. The most common method used for cervical cancer screening is Pap cytology, followed by HPV DNA test, visual inspection with acetic acid (VIA), and cervicography. VIA is an alternate screening program to Pap cytology in low-resource settings (so-called ‘see and treat’ method). Cervicography is a photographic diagnostic test which a non-gynecologic oncologist takes pictures of the cervix and submits them to a gynecologic oncologist for interpretation. HPV test is being introduced into some middle- or high-resource countries as the primary screening program or as an adjunct test to Pap cytology screening [12,16-18].

Recently, ASCCP guidelines for management of cervical cancer screening abnormality have been updated to the 2019 version [12]. Four new guiding principles were added to the 2019 version. First, HPV DNA test is based on the risk estimation. The HPV test can be performed either primary HPV testing alone or co-testing in conjunction with Pap cytology. Second, personalized management is recommendable with understanding of current results and individual history. Third, guidelines should allow updates to unify new screening methods because of risk reduction from HPV vaccination. Finally, colposcopy practice should be performed with guidance detailed in the ASCCP Colposcopy Standards [19].

This study had some limitations. First, colposcopic biopsy samples were not centralized because of the following two reasons: (1) approximately 60% of CIN1 lesions could spontaneously regress without any treatment [26], and (2) the intraobserver and interobserver agreements for pathologic diagnosis of CIN1 were poor, while agreements for CIN2+ lesions were good [27]. However, according to data from histology reviews from population-based studies, diagnosis of CIN2 was a less reproducible and less confirmative than those of CIN3 [28-30]. Second, our findings could not be simply extended to Western women because HPV infection is population-specific. Third, HPV genotyping was evaluated in various laboratories under real clinical practice. Therefore, there were three different assays used for HPV-detection in this study. Because of the limitation of the retrospective study, we could not assess the distribution of genotypes between the different HPV tests. Meanwhile, this study has several strengths of this study. First, it included a large number of women who were evaluated. In addition, all women enrolled had Pap cytology, HPV genotyping, and colposcopic punch biopsy performed. Moreover, real-world data in clinical practice were used.

In conclusion, our findings suggest that colposcopy should also be referred to women with multiple HR-HPVs, HPV35, or HPV58 infections, as well as those with HPV16 and HPV18, although the current 2019 ASCCP guideline recommends that HPV16+ or HPV18+ women with Pap cytology result referred for immediate colposcopy whereas those who are positive for the other HR-HPV genotypes are recommended to undergo repeated co-testing with both Pap cytology and HPV test at 12 months. This is the first study that documents referral to colposcopy of multiple HR-HPVs, HPV35, or HPV58 positive women with negative cytology. However, further large and randomized controlled trials are needed to change current guideline based on our findings.

TS and SJS designed the study and wrote the paper. SKL, BRK, WJ, KHK, KN, JCS, and TJK participated in the design of the study and performed the static analysis. All authors read and approved the final manuscript.

The study protocol was approved by the local ethics committee (Approval No.: KBSMC 2018-05-023; Approval date: 15 May 2018), and the need for written informed consent was waived.

Thanks to all the patients.