Cervical intraepithelial neoplasia (CIN) is a common precancerous lesion in women of reproductive age group worldwide [1]. Although no treatment is considered superior among the various excisional treatment modalities [1-4], the loop electrosurgical excision procedure (LEEP) has widely been preferred. This is because it can be performed under local anesthesia, it is easy to obtain specimens for pathological examination, and it has a high success rate with low major surgical morbidity rates [1,5].

Postoperative bleeding is a major distressing complication after the LEEP, not only for the physician, but also for the patients, because it results in an unscheduled visit to the outpatient clinic or the emergency room. Hence, several studies have been conducted on the prevention of hemorrhage after the procedure, using vasopressin, epinephrine, Monsel’s solution, tranexamic acid, or local hemostatic agents [6-11].

Of the several local hemostatic methods, a kaolin-impregnated gauze is a United States Food and Drug Administration-approved hemostatic dressing for external use to control moderate-to-severe bleeding. Kaolin is a mineral that is effective in controlling hemorrhage when combined with a standard gauze and applied to wounds. Kaolin activates clotting factor XII (Hageman factor) when exposed to plasma, thus activating factors XI, XII, and prekallikrein. A kaolin-impregnated gauze has been shown to be effective in stabilizing arterial hemorrhage in swine models [12].

This retrospective study was approved by the Institutional Review Board of Kangbuk Samsung Hospital (Approval No.: KBSMC 2018-06-044-001; Approval date: 8 July 2018), and the need for written informed consent was waived. We retrospectively identified patients who underwent the LEEP between January 2011 and May 2018 at the Department of Obstetrics and Gynecology, Kangbuk Samsung Hospital, Seoul, Republic of Korea. The inclusion criteria were age 18–70 years and non-pregnant status. The exclusion criteria were as follows: no follow-up care received; use of a local hemostatic (i.e., local vasoconstrictor or prophylactic suture) other than a kaolin-impregnated gauze was used during the procedure; or subsequent hysterectomy performed within a month of the LEEP. Demographic data, Papanicolaou (Pap) cytology results, human papillomavirus (HPV) test results, colposcopy results, treatment, pathology results, and follow-up data were extracted from the electronic medical records.

The LEEP was performed in an outpatient or inpatient setting by the attending physicians for various reasons such as the extent of cervical lesions, difficulty in exposing the cervix in an ambulatory setting, or patient preference. Under local or general anesthesia, a virginal speculum was inserted, and the uterine cervix was grasped with an Allis forceps or Tenaculum forceps. The electrosurgical generator used was Force-FX (Valleylab, Boulder, CO, USA), along with loop electrodes (Valleylab). The size of the loop was dependent on the extent of the lesion. The electrical power of the loop electrode was set to 80 W. After completion of the excision, ball tip electrocauterization with a pure coagulation frequency was routinely performed to prevent bleeding and to destroy any possible residual lesions. No prophylactic hemostatic suturing was performed in any of the patients in order to avoid any long-term complications, especially cervical stenosis. A vaginal suppository was not prescribed postoperatively, but all patients were prescribed oral antibiotics after the procedure to prevent any infection from occurring. At the discretion of the physician, a kaolin-impregnated gauze (QuikClot combat gauze, Z-Medica, Newington, CT, USA; Q-Guard topical hemostatic dressing, Samyang Biopharm, Seongnam-si, Gyenggi-do, Korea) was placed over the cervical wound and vagina. The patients were instructed to remove the gauze after approximately 4 h if no vaginal bleeding was observed. All patients were scheduled for follow-up at 1 week and 4 weeks after the LEEP, to counsel them about their pathological reports and treatment decisions and to inquire about their symptoms and complications. Pap cytology was analyzed using the liquid-based method and reported by gynecological pathologists. An HPV test was performed on the cervicovaginal swab samples, using commercial nucleic acid amplification assays available in Republic of Korea, to detect the high-risk (HR) HPV group (types 16, 18, 31, 33, 35, 39, 45, 51, 52, 53, 56, 58, 59, 66, 68, 69, 73, or 82). A sample was considered positive if the HPV test detected an HR-HPV type.

The primary outcome measure was the incidence of postoperative bleeding necessitating hemostatic intervention after the LEEP. Postoperative vaginal bleeding was classified into two categories according to the timing of the bleeding: early onset (within 24 h after the procedure) or delayed onset (between 1 day and 1 month after the procedure). A hemostatic intervention included chemical cauterization, electrocauterization, hemostatic suturing, and vaginal gauze packing. Postoperative cervical infection was defined as the need for the administration of additional antibiotics for the treatment of purulent vaginal discharge, endometritis, cervicitis, or pelvic inflammatory disease.

Statistical analyses were performed using SPSS software (version 20.0, SPSS Inc., Chicago, IL, USA). Qualitative data are presented as frequencies (percentages) and quantitative variables were presented as means standard deviations (SDs) or medians (ranges) after checking for the normality of data distribution. The baseline characteristics and study outcomes were compared using student’s t-test or the Mann-Whitney U-test for continuous variables and the test or Fisher’s exact test for categorical variables, as appropriate. A logistic regression model was used to identify the clinical variables associated with postoperative bleeding after the LEEP. A multivariate analysis was performed using variables that were deemed statistically significant in the univariate analysis. Statistical significance was set at p values 0.05. A post-hoc power analysis was performed using G*Power version 3.1.9.3 (Heinrich-Heine-Universität Dusseldorf, Dusseldorf, Germany) to ensure that there was adequate power to interpret the data. 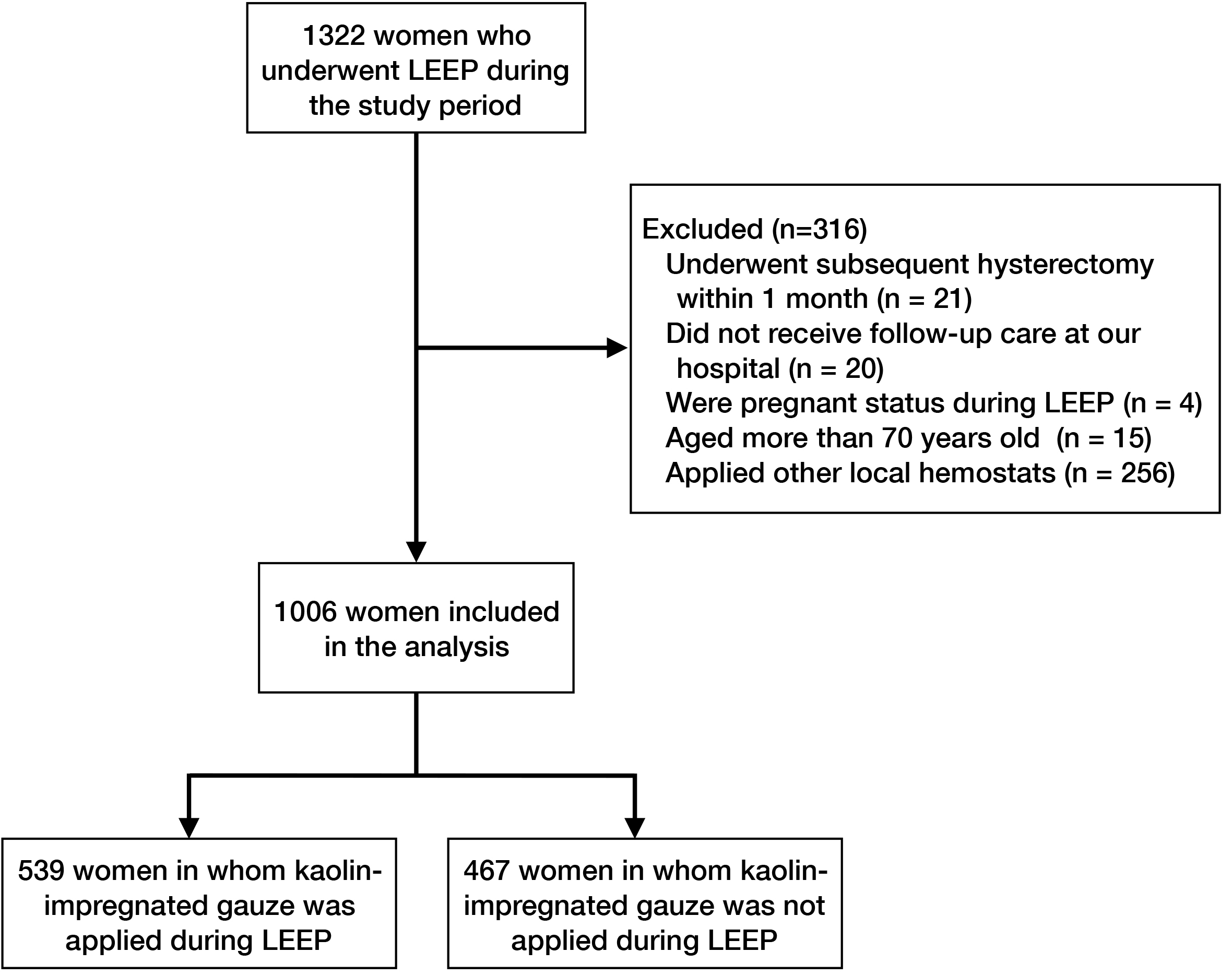 The average age of the 1006 women was 43.4 10.7 years, and their characteristics are summarized in Table 1. The baseline demographic data, including age, parity, Pap smear results, HPV test results, LEEP pathology, resection margin involvement, and specimen depth, were similar between the two groups.

Table 2 shows the study outcomes of between the two groups. Postoperative vaginal bleeding necessitating an intervention developed in 12.8% of the study population (129 of 1006 women), with a significant difference between the two groups (9.3% in the treatment group vs. 16.9% in the control group; p 0.001). A post-hoc power analysis of the primary outcome (postoperative bleeding) was performed with the -value set at 0.05; the study was found to be adequately powered at 94.7%. The most frequently performed intervention was electrocauterization (n = 55, 42.6%), followed by chemical cauterization (n = 48, 37.2%), vaginal gauze packing (n = 20, 15.5%), and hemostatic suture (n = 6, 4.7%), with no significant difference between the two groups. Women in the treatment group had a significantly lower incidence of both delayed onset bleeding and early onset bleeding as compared to those in the control group (8.8% vs. 14.6% for delayed onset bleeding; p = 0.004 and 0.6% vs. 2.4% for early onset bleeding; p = 0.015).

The major finding of this study was that a kaolin-impregnated gauze reduced the incidence of postoperative bleeding in patients who underwent the LEEP for the treatment of CIN. We also found that the application of this local hemostatic on the cervical wound site was effective in reducing both delayed onset and early onset hemorrhage. The results of this study are consistent with those of earlier studies, which reported that a kaolin-impregnated gauze such as a QuikClot combat gauze, has significant hemostatic effects in various surgical fields [13,14]. Delayed hemorrhage, defined as bleeding occurring from the surgical site several days after the surgery, is the most distressing complication of the LEEP for the physicians in outpatient settings. Moreover, delayed hemorrhage usually requires medical assistance and more time and effort to be invested in its management for both the patient and the physician. Hence, we believe that the identification of the clinical factors for the prevention of postoperative bleeding in this study is very valuable. Furthermore, this is the first study to demonstrate the potential hemostatic effects of a kaolin-impregnated gauze in the LEEP.

A kaolin-impregnated gauze has predominantly been used in combat settings and trauma surgery [15,16], and its use in the field of obstetrics and gynecology is limited [13]. Although there are many conventional methods to control hemorrhage in the ambulatory and surgical setting, these interventions have certain limitations. Moreover, in some clinical settings, creative approaches for achieving hemostasis are required to attain rapid hemostasis and/or avoid additional surgical procedures, which could be associated with higher morbidity. Vilardo et al. [14] reported three cases in which they found a kaolin-impregnated gauze was found to have a significant clinical efficacy in controlling cervical and vaginal hemorrhage. In all three cases, excellent hemostasis was achieved without any identifiable adverse effects. In two of these cases, one of vaginal cuff hemorrhage in the setting of therapeutic anticoagulation and another of delayed hemorrhage from a cervical cone bed, no additional surgical intervention to control bleeding was required. In the third case of obstetric hemorrhage after cesarean hysterectomy, hemostasis was achieved with disseminated intravascular coagulation when all other means of achieving hemostasis had failed.

Several methods have been described in the literature for the prevention of postoperative hemorrhage after cervical procedures. A randomized controlled trial on the use of vasopressin in patients undergoing laser vaporization of the cervix revealed no significant difference in the risk of clinically relevant bleeding between women receiving vasopressin and those receiving placebo [8]. A retrospective study investigating factors preventing delayed hemorrhage in 369 patients who underwent the LEEP showed that patients administered with a local injection of 2% lidocaine hydrochloride with 1 : 100,000 epinephrine presented a significantly lower incidence of delayed onset bleeding than those not injected with it (p = 0.02). The prophylactic use of a fibrin sealant (Tisseel, Baxter Healthcare Co., Westlake Village, CA, USA) reduced the incidence of postoperative hemorrhage after the LEEP [10,17], but the prophylactic application of a mixture of collagen, fibrinogen, and thrombin (TachoSil, Nycomed, Zurich, Switzerland) did not reduce the incidence of postoperative hemorrhage [11].

Our study had several limitations. First, this study had a retrospective comparative design, and sample size calculation was not performed. However, we performed a post-hoc power analysis of the primary outcomes. The second limitation of this study was the possibility of a selection bias due to many surgeons involved, though all the surgeons were from the same institution and followed the same surgical standards. Notably, the strength of this study was that it was conducted using a large sample. We believe that an adequate sample size is necessary to reveal small but significant differences in the risk of postoperative bleeding between the groups.

In conclusion, local hemostasis using a kaolin-impregnated gauze is effective not only in controlling perioperative bleeding, but also in preventing delayed-onset hemorrhage after the LEEP. Preventing postoperative bleeding after the LEEP can help physicians during clinical practice and patients in terms of quicker recovery. However, our findings may not be generalizable because this study was a retrospective review of a non-randomized population. Therefore, additional randomized controlled trials are necessary to confirm the results of this study.

TS designed the study and wrote the paper. KHK and KWL participated in the design of the study and performed the static analysis. All authors read and approved the final manuscript.