The global statistic reported that cervical carcinoma was the 4th most frequently diagnosed cancer and the 4th leading cause of cancer death in females worldwide. About 311,365 deaths and 569,845 new cases were reported in 2018 [1]. Despite advances achieved in screening and human papillomavirus (HPV) vaccination, locally advanced cervical carcinoma (LACC) was detected in a great number of patients at the initial diagnosis [2] and the locally advanced stage was associated with high mortality [3].

The National Cancer Institute (NCI) suggested that cisplatin-based concomitant chemoradiotherapy was the main care regarding LACC [4,5]. Although CCRT has been used as the first-line therapy for LACC, it only yielded a 60%–65% survival rate and there were elevated rates of distant and local failure (18%, 17%, respectively) [6,7]. Thus, new treatment options for patients with LACC are urgently needed. CCRT followed by ACT is a promising way to prolong life and reduce the recurrence of LACC patients, because it can help to eradicate the residual disease in the pelvis and eliminate the potential metastases, thereby improving survival [8]. The role of CCRT followed by ACT for LACC has been explored in several studies. Some papers have proved beneficial results [9,10]. Nevertheless, some papers also indicated that CCRT followed by ACT has no survival benefit and this was the main reason that adjuvant chemotherapy was not widely applied in clinical practice [10,12]. On the whole, there is no consensus on the role of CCRT followed by ACT in the treatment of LACC. This meta-analysis integrated risks and benefits of CCRT followed by ACT that has been studied in published researches of LACC. The results of our study may provide helpful guidance for future researches.

The current study was based on the Preferred Reporting Items for Systematic Reviews and Meta-Analyses (PRISMA) Statement[13]. The Web of Science, Cochrane Library, EMBASE, and PubMed were systematically reviewed for finding eligible studies up to the date of 28 February 2020. The following terms and their combinations were applied: (uterine cervical neoplasms OR cervical cancer OR uterine cervical cancer) AND (chemoradiotherapy OR radiochemotherapy OR concurrent chemoradiotherapy) AND (chemotherapy, adjuvant OR adjuvant chemotherapy OR sequential chemotherapy). References were manually screened to seek potential researches.

Those studies would be selected under the following conditions: (1) the trial should enroll FIGO stage IB to IVA cervical carcinoma patients, regardless of histology; (2) retrospective cohort study or randomized controlled trial (RCT); (3) curative platin-based CCRT followed by ACT, as intervention; (4) curative platin-based CCRT alone as a comparison; (5) at least 30 people in each arm; (6) at least one of the clinical outcomes including OS, PFS, LFR, DM, and AEs were reported; (7) the full text of original studies had to be written in English. The most recent version was selected in cases with duplicated data. Case reports, reviews and single-arm cohort studies were not included.

The Cochrane Risk of Bias tool and the Newcastle-Ottawa Scale (NOS) are the tools to evaluate the quality of RCTs and retrospective studies, respectively [14,15]. The risk of bias was assessed independently by two authors and any disagreements were resolved by discussion with a third author. The following relevant datum from the included articles were extracted: name of the first author, date of publication, study design, inclusion period, histology type, FIGO stage, number and the median age of patients in CCRT followed by ACT group and CCRT group, details of curative concurrent chemoradiotherapy and adjuvant chemotherapy.

OS and PFS datum were assessed by HR (hazard ratios) with a 95% confidence interval (CI); relative risks (RRs) and 95% CI of LFR, DM, and treatment-related adverse events were computed through each study’s original datum. The RevMan 5.3 statistical software (The Cochrane Collaboration, London, UK) provided by “www.cochrane.org” was used for the meta-analysis. Cross-study heterogeneities were studied through the I statistic and Cochran Q test [16,17]. The Mantel-Haenszel methods were employed to perform a fixed-effect model when minimal heterogeneity was present (Q test, p 0.1, I 50%) among the eligible studies. When significant heterogeneity existed (Q test, p 0.1, I 50%), the DerSimonian-Laird method was used to perform a random-effect model. The sensitivity analysis was used to determine the stability of the results. Funnel plots were used to evaluate potential publication bias.

1021 related publications were identified through the Cochrane Library, Web of Science, PubMed, and EMBASE. After reviewing abstracts and titles, we locked 35 potential studies and reviewed them in full. Thirty articles did not meet inclusion conditions and were excluded. Ultimately, 5 studies [9,18-21]. formed the final meta-analysis comprising two RCTs and three retrospective cohort studies. Fig. 1 showed the screening process. Flow diagram of the selection procedure.

The selected studies were published between 2007 and 2019, summing 1172 patients for sampling. The entire samples who were newly diagnosed as LACC received primary curative CCRT with or without ACT. All patients received platin-based chemotherapy with concurrent external beam radiation therapy (EBRT) of 45–50.4 Gy in 25–28 fractions, followed by intracavitary radiation therapy (ICRT) of 28–35 Gy. EBRT was performed with two-field box technique or four-field box technique using linear accelerator or cobalt 60 external irradiation. ICRT was administered using high-dose three-dimensional brachytherapy with iridium-192 (Ir). Table 1 (Ref. [9,18-21]) displayed the characteristics of included researches. The quality assessment of two RCTs was displayed in Table 2[9,18]. Three retrospective studies all got seven-star (Table 3) [19-21]. 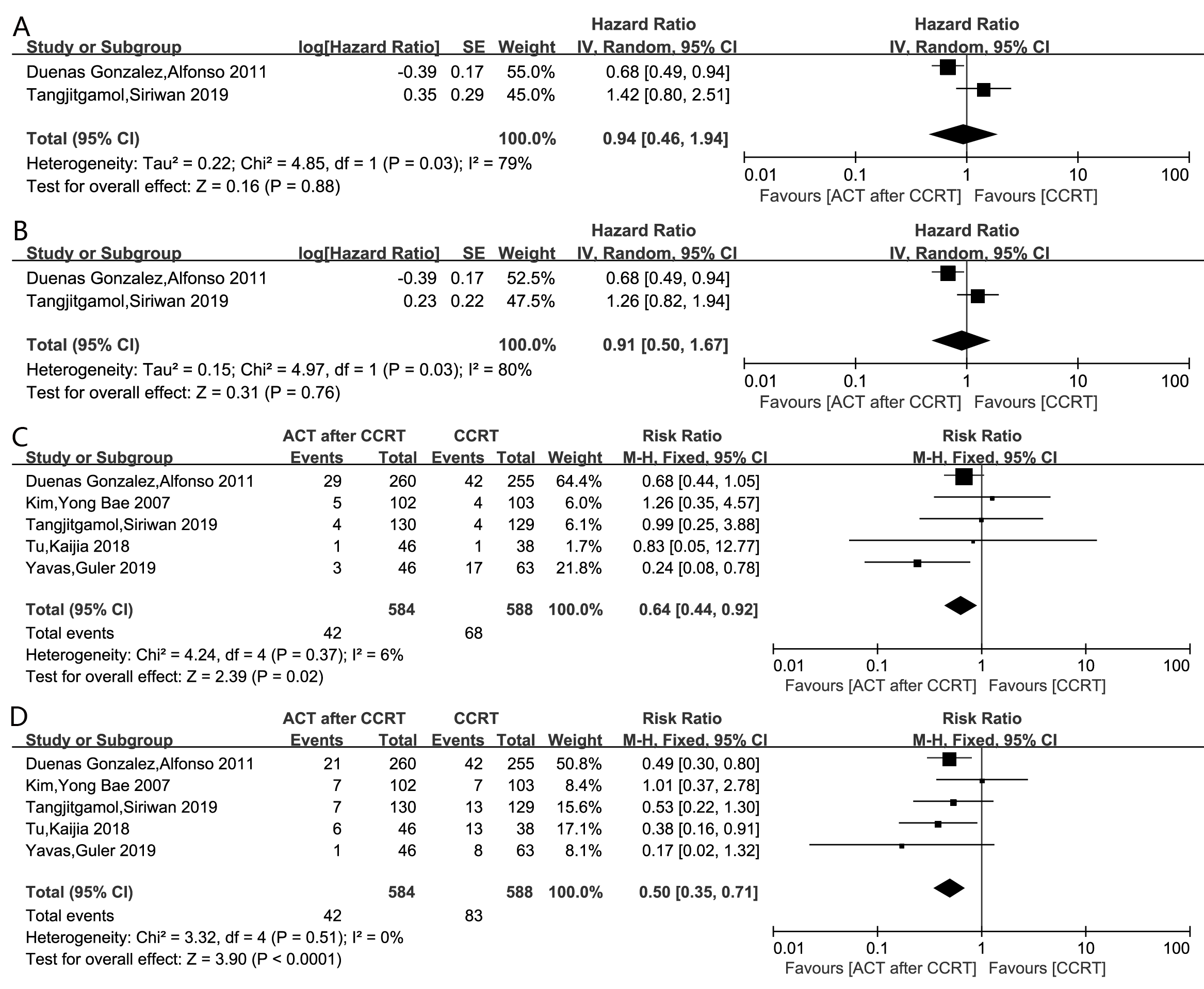 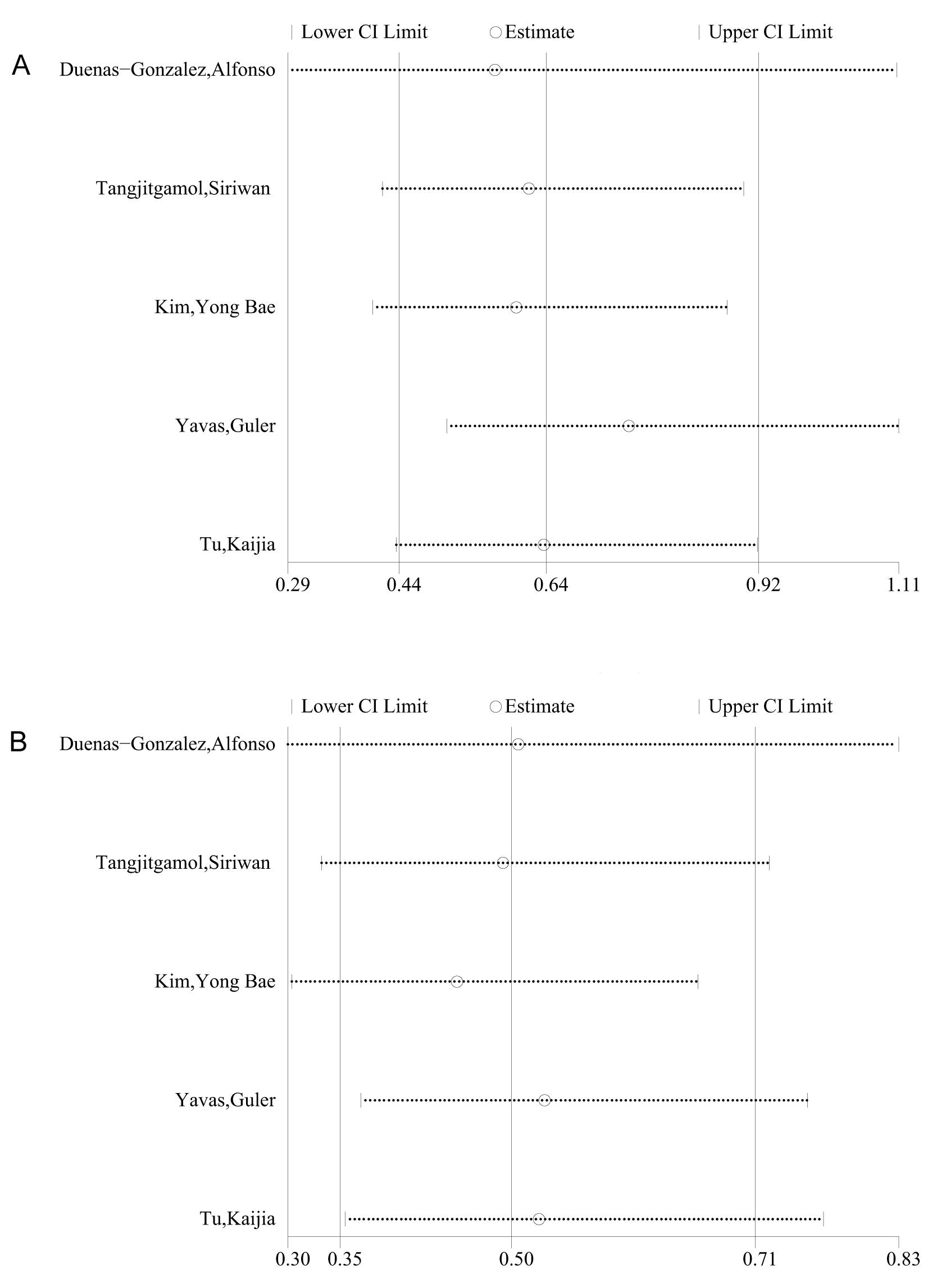 The sensitivity analysis of LFR (A), DM (B) in patients with local advanced cervical carcinoma between CCRT followed by ACT group and CCRT group.

The funnel plots of OS, PFS, LFR, and DM were displayed in Fig. 4 and no obvious asymmetry was presented. Therefore, publication bias could be disregarded. 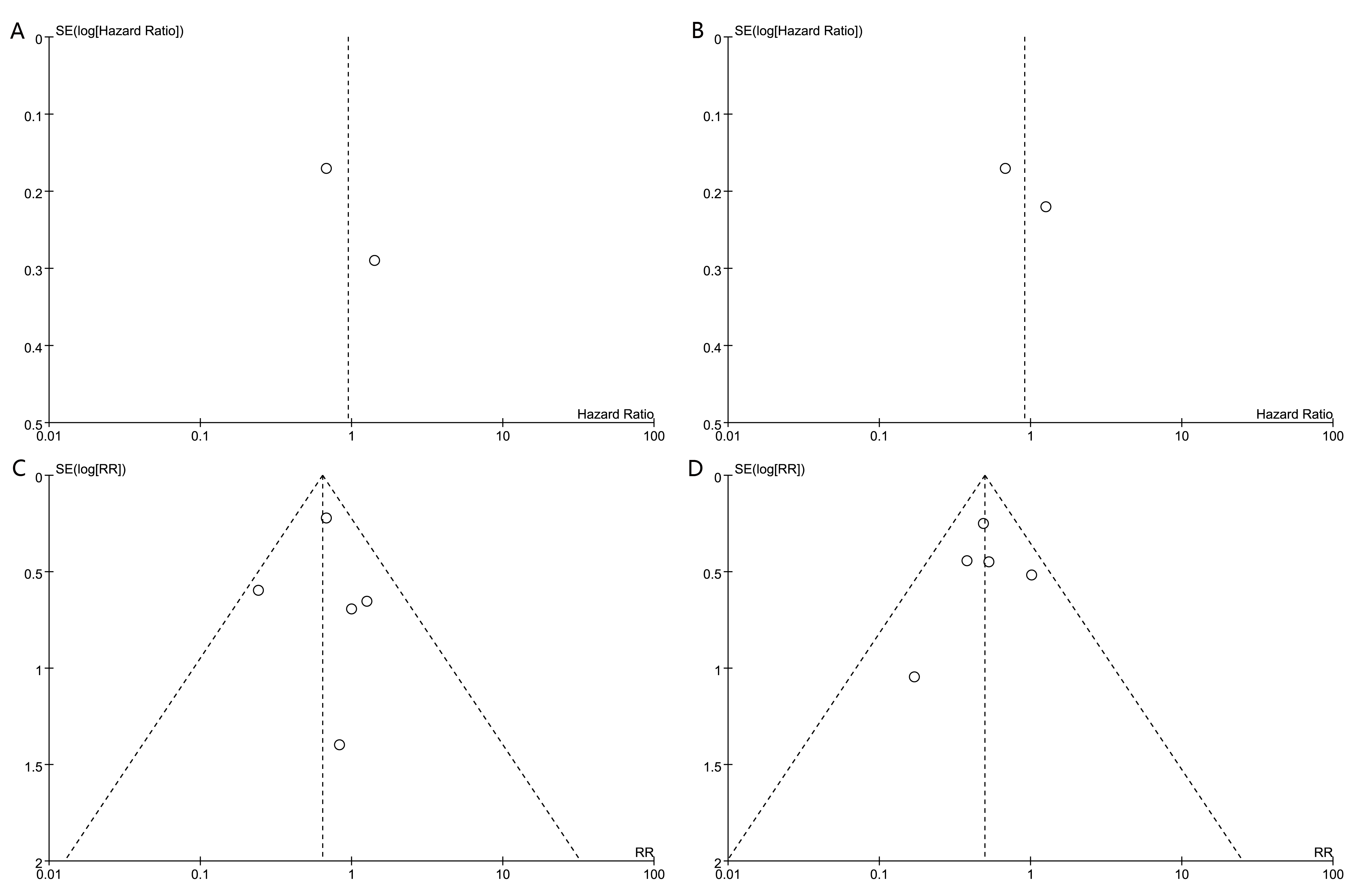 At present, cisplatin-based concurrent chemoradiotherapy has been the main care in LACC following the National Comprehensive Cancer Network (NCCN) guidelines based on 5 randomized trials’ results [22-26]. However, most patients with LACC experienced disease progression after accomplishing standard CCRT, indicating the need for a new treatment that could reduce recurrence or metastasis in patients with LACC [1]. One option was to give ACT after CCRT. Concerning this study, the efficiency of CCRT followed by ACT and CCRT alone was compared. The results suggested that CCRT followed by ACT group did not obtain better survival outcomes (OS and PFS), but it reduced the risk of LFR and DM. CCRT followed by ACT increased the risk of acute hematologic toxicities and grade 3–4 proctitis but did not increase late toxicities.

When comparing to CCRT, the efficiency of CCRT followed by ACT is still controversial and needs further research. Zhang’s [11] results in 2019 revealed that statistical difference was not found in OS and PFS among CCRT followed by ACT and CCRT, the same results were also reported in the results of Chatterjee [27] and Cheng [12]. However, Chen’s [10] results indicated that CCRT followed by ACT was associated with better PFS. Branka et al. [28] reported that CCRT followed by ACT (cisplatin plus ifosfamide) was a valuable treatment option for LACC (IB-IVA) and they observed an overall survival of 74.6% at 96 months. The previous meta-analysis included only RCTs which was few, so the authors conducted systematic review [29]. The present meta-analysis included five studies to explore the differences between CCRT and CCRT followed by ACT in FIGO stage IB-IVA cervical carcinoma patients. However, only 2 researches mentioned OS and PFS. There were heterogeneities in the analysis of OS and PFS. Finally, our study has not shown survival benefit from adding chemotherapy to CCRT. On one hand, there are limited studies containing survival outcomes about adding chemotherapy to CCRT compared to CCRT alone;on the other hand, the reasons for the heterogeneities might be the differences in some uncontrolled aspects, such as the median age of patients (Dueñas-González 2011 vs Tangjitgamol 2019: 46 y vs 50 y), the proportion of histological classification (non-adenocarcinoma of Dueñas-González 2011 vs Tangjitgamol 2019: 93.8% vs 79.2%) and the scheme of chemotherapy. One study used a combination of cisplatin and gemcitabine during CCRT and then followed by the same regimen as the experimental group while the control group was given single-agent cisplatin during CCRT, whereas another study used cisplatin alone during CCRT before ACT (paclitaxel plus carboplatin) in comparison with single regimen cisplatin during CCRT [18]. As a matter of fact, the recurrence rate of LACC is about 50–70% after completing the standard treatment [30]. The poor prognosis of advanced cervical carcinoma was connected with stage, tumor size, metastasis of the lymph nodes, and the hemoglobin level [31]. The purpose of ACT is to eliminate distant micro-metastases and thus improving survival. Chen et al. [10] revealed that CCRT followed by ACT reduced distance metastasis but is correlated with poorer response to locoregional recurrence. Cheng et al. [12] reported that CCRT followed by ACT exhibited a lower pelvic recurrence and distant metastasis rates for patients with LACC, the same results as ours. In our study, five researches mentioned LFR and DM and there was no heterogeneity in the analysis of LFR and DM. Finally, our study suggested that CCRT followed by ACT reduced local recurrence and distant metastasis and the results were stable through sensitivity analysis. It is necessary to further explore the potential value of adjuvant chemotherapy for LACC. Of course, CCRT followed by ACT has some disadvantages. It prolongs the treatment time, increases the medical burden, and causes some adverse effects. Acute hematological toxicity caused by chemotherapy and acute radiation injury caused by radiotherapy (e.g., proctitis, cystitis, dermatitis, etc.) are well known and usually reversible with aggressive treatment. Acute hematological toxicity could be corrected by drugs in clinical practice, such as subcutaneous injection of erythropoietin (EPO), thrombopoietin (TPO), granulocyte colony-stimulating factor (G-CSF), etc., so that CCRT followed by ACT could be successfully completed; acute radiation injury can be resolved by adjuvant therapy, adjustment of radiation dose, and suspension of radiotherapy when necessary. However, late chronic effects of radiotherapy on the rectum, urinary tract, and vagina, while uncommon, can be devastating for patients. Our study suggested that CCRT followed by ACT increased the risk of acute hematologic toxicities and grade 3–4 proctitis but did not increase late toxicities (proctitis, cystitis).

The value of ACT in the treatment of LACC is not clear because of the differences in experimental design and biases (intervention measures, etc.). However, no statistical difference does not mean that there is no clinical survival benefit. Whether the CCRT followed by ACT could have survival benefit for LACC patients with those risk factors, such as non-squamous cell carcinoma, large tumor, lymphatic metastasis, lymphovascular invasion, etc. This is a problem that needs to be solved in the future.

The present study has several limits. First, three selected researches were retrospective. Second, cycles and drugs of CCRT and ACT between studies were applied differently. Third, only the articles written in English were searched and examined. All-round research with various languages was not conducted, because it was difficult to obtain accurate translation and data. To confirm the efficacy of CCRT followed by ACT, broader randomized clinical trials in more centers are needed. Researches meeting these conditions are currently being carried out. The ongoing OUTBACK trial (ClinicalTrials.Gov No. NCT01414608) is testing the effect of CCRT followed by ACT versus CCRT in patients with LACC [32]. Unfortunately, these results are not yet published and are impossible to be included in the current study. Future researches may clarify the potential value of CCRT followed by ACT.

This meta-analysis’s results suggested that CCRT followed by ACT did not prolong OS and PFS. It decreased the local failure recurrence and distant metastasis compared with CCRT alone. CCRT followed by ACT increased acute hematologic toxicities and acute proctitis but did not increase late toxicities. Further study is needed in ACT after CCRT for locally advanced cervical carcinoma.

This research was funded by The National Natural Science Foundation of China, grant number: 81703758.

Flow diagram of the selection procedure.