Compartment syndrome is a condition in which an increased internal pressure in the upper/lower leg compartment results in a circulatory disturbance causing muscle and nerve dysfunction. Although most commonly caused by trauma, compartment syndrome can also be caused by surgical positioning as first described by Volkmann et al. [1] in 1882. Later, in 1979, Leff et al. [2] reported a case caused by the lithotomy position. Well leg compartment syndrome (WLCS) is a surgical complication of improper intraoperative positioning [3] that has an incidence of 1/3500, as reported by Halliwill et al. [4]. In addition, a German survey reported a WLCS incidence rate of 0.067% to 0.28% after gynecological surgery [5]. Delayed diagnosis and treatment of WLCS can eventually lead to renal failure, rhabdomyolysis, irreversible nerve damage, and sepsis, which can be fatal [6,7].

In recent years, endoscopic surgery has been introduced in the gynecology field for treating malignant tumors and prolonged surgeries in the lithotomy position have become more common. There are many reports of WLCS cases after colorectal cancer surgery, which are also performed for the pelvis in the lithotomy position [8]. However, to the best of our knowledge, there have been only five case reports of WLCS following gynecologic laparoscopic surgery including our report [9-12]. The present case is of a laparoscopic modified radical hysterectomy performed for uterine cancer. The surgery was prolonged in the lithotomy position causing postoperative compartment syndrome for which fasciotomy was performed.

The patient was a 44-year-old primigravida woman. At the age of 37, when she visited his local doctor complaining of pain in her left foot, she was diagnosed with chronic rheumatoid arthritis based on bone atrophy in her left foot and blood sampling results. She had a history of taking Methotrexate and Salazosulfapyridine and her condition was stable. She was 163 cm tall, weighed 85 kg, had a body mass index (BMI) of 32.0 kg/m, and had no history of smoking. She visited a gynecologic clinic for abnormal genital bleeding lasting approximately 2 weeks 3 months before being referred to our department.

Endometrial histopathology revealed endometrial carcinoma G1, and uterine cancer was diagnosed. She was referred to our department for further examination and treatment of endometrial cancer. Computed tomography (CT) showed no obvious lymph node or distant organ metastasis, and magnetic resonance imaging results showed that the tumor had invaded into half the depth of the myometrium. Therefore, she was diagnosed with stage IA uterine cancer and underwent laparoscopic modified radical hysterectomy, bilateral adnexal resection, and pelvic lymph node dissection. The surgery was performed under general anesthesia with the patient in the lithotomy position. During surgery, she wore elastic stockings from her toes to her knees to prevent deep vein thrombosis. She also had intermittent pneumatic compression of the thighs and lower legs. She was insufflated through the umbilical region by the closed method with the head down at 15 degrees, and a 5-mm trocar was inserted to observe the abdominal cavity. A 12-mm trocar was inserted into the left lower abdomen, and there were 5-mm trocars in the right lower abdomen, lower midline, and on the right and left umbilical sides respectively. With a total of six trocars, the operation began with a pelvic lymph node dissection. Subsequently, a modified radical hysterectomy and bilateral adnexal resection were performed by cutting the anterior layer of the bladder uterine ligament. Anti-adhesion material was applied onto the entire wound, and the surgery was completed. The operative time was 6 h and 49 min, the blood loss was 9 mL; and the weight of the removed uterus was 257 g. During the operation, insufflation was once suspended for 10 min at 3 h after the start of the operation, and the patient was returned to a horizontal position.

After waking from general anesthesia and extubating, she complained of sudden pain in her left leg. Her left gastrocnemius muscle was markedly swollen, and the distinct pain was localized to this muscle as well (Fig. 1). She had motor deficits, but her skin sensation was normal. Prompt contrast-enhanced CT showed no obvious arterial occlusion or venous thrombus, but tension was observed in all four compartments of the left lower leg (Fig. 2). Following consultation with an orthopedic surgeon, she was diagnosed with compartment syndrome, and a decompression incision was indicated. Contrast-enhanced computed tomography images of the lower extremity. Tension was observed in all four compartments of the left lower leg. Compartment syndrome was diagnosed.

A skin incision was made on the medial and lateral sides of the left lower leg extension, the fascia was incised, and decompression of the internal muscles was performed (Fig. 3). Changes in serum creatinine kinase (CK) concentrations are shown in Fig. 4. Immediately after surgery, the CK level was 1089 U/L, which increased to 7861 U/L on postoperative day 1, decreased to 3058 U/L on postoperative day 3, and continued to decline thereafter. In terms of lower extremity motor deficits, she began rehabilitation on postoperative day 2. Before the start of rehabilitation, the manual muscle test for her left lower extremity showed a level of 3–4, and she had numbness in the medial and plantar areas. On postoperative day 3, she could walk with a walker, a cane on postoperative day 4, and with no aide postoperative day 9 onward. Pathological examination revealed that the histological type of the uterine body was endometrial carcinoma G2 with one pelvic lymph node metastasis (1/43) and metastasis to the right ovary. As a result, uterine cancer IIIC1 was diagnosed with a high risk of postoperative recurrence. Carboplatin and paclitaxel were administered as adjuvant chemotherapy. CT after three cycles showed multiple nodules and invasive shadows in the lung fields. Concomitant polymyositis and associated interstitial pneumonia were diagnosed, and chemotherapy was discontinued. She underwent steroid pulse therapy for polymyositis, which required 3 months of inpatient treatment. Her interstitial pneumonia has since abated and she is taking oral steroids on an outpatient basis. In the meantime, there was no deterioration of the left lower extremity after compartment syndrome and chronic rheumatoid arthritis. She is now in postoperative month 34 with no recurrent findings and good postoperative course of compartment syndrome with no evidence of clinical sequelae. For polymyositis, she has been prescribed steroids in the internal medicine department and is currently in stable condition. 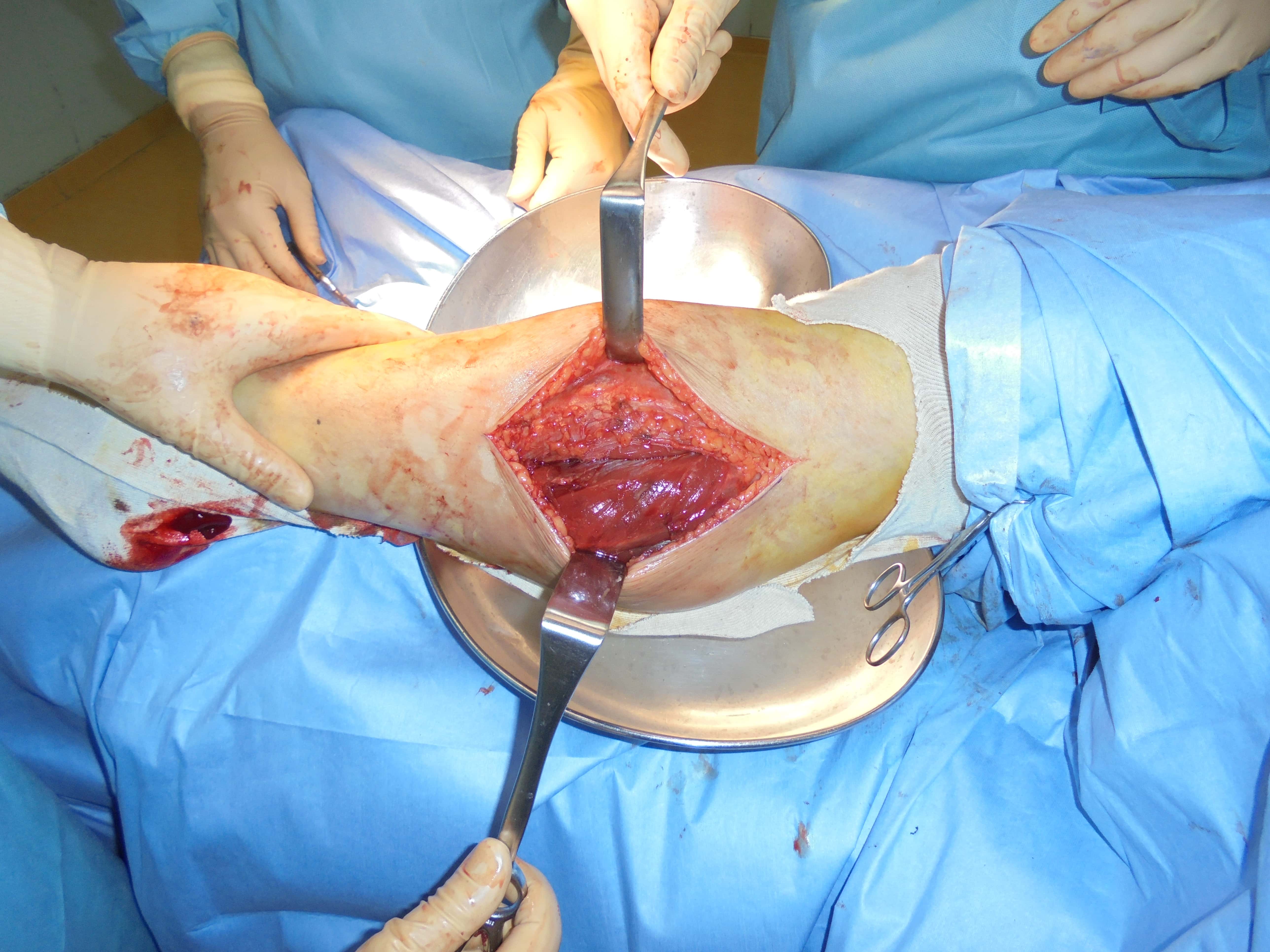 Emergency fasciotomy. A skin incision was made on the medial and lateral sides of the left lower leg extensor, fascia was incised, and decompression of the internal muscles was performed.

A MEDLINE search led to 15 articles. On the other hand, Web of Science led to 5 articles. We reviewed the 20 articles and found 5 reports of compartment syndrome with fasciotomy after laparoscopic gynecologic surgery (including our case). Table 1 shows these 5 cases [8-11].

In all five reported cases, laparoscopic surgery was performed in the lithotomy position. The patients were in a relatively higher weight range including the patient who had a BMI of 32 kg/m. The operative time was 6 h and 49 min in the present case. This long operative time was due to the obesity of the patient with a BMI of 32 with a significant amount of fat that caused prolonged lymphadenectomy. In previous reports of the cases in Japan, the operative time was longer than 4 h except for one patient with ectopic pregnancy who developed compartment syndrome at 90 min after the start of the operation [12]. However, the number of reported cases is too small to predict the development of compartment syndrome due to the lack of clear evidence, but prolonged elevation of the pelvis in the lithotomy position is a risk factor. The patient had a history of rheumatoid arthritis, and her vessels may have been more fragile than usual. Rheumatoid arthritis tends to cause vasculitis which is also known as rheumatoid vasculitis, and eported to be most common in the lower limbs [17]. In this case, the patient did not have the systemic condition of rheumatoid vasculitis, but the inflammation and vulnerability of blood vessels may be a factor. The lithotomy position during surgery, intermittent pneumatic compressions, and prolonged surgery with elastic stockings in our patient may have compressed the originally fragile blood vessels in the leg causing them to swell and resulting in the development of compartment syndrome.

The differential diagnosis of compartment syndrome is deep vein thrombosis (DVT), which requires absence of DVT on contrast-enhanced CT after the onset of symptoms as in this case. Risk factors for DVT include prolonged surgery, malignancy, old age, and large pelvic masses [18,19]. We assessed the present patient to be at a high risk of DVT; therefore, we used elastic stockings and an intermittent pneumatic compression device during the operation; these were our usual measures of DVT prevention. The patient was also given low-molecular-weight heparin for a week after returning to the postoperative room. However, these external foot compressions have also been reported to be involved in the development and aggravation of compartment syndrome [20,21]. Some reports suggest that it is safer not to use elastic stockings or other intermittent pneumatic compression techniques in lithotripsy surgery [22]. The countermeasures and prevention of DVT and compartment syndrome are contradictory thus making it a challenge to decide which of the two should be the emphasis.

From the above, there is no clear evidence or guidelines for compartment syndrome in laparoscopic surgery for malignancies. However, reports from various authors have said that the greatest risk of compartment syndrome may be the lithotomy position [4,9,11]. In our department, after this case, the lithotomy position was stopped, and laparoscopic surgery was performed in the open leg position. There is also no exact time frame, but some reports suggest that it is better to release the pelvic elevation in about 2 to 4 hours [9,23]. In our department, the high pelvic position is released for 10 min every 3 h during which the nurse decompresses the feet. However, there is no clear evidence that repositioning is useful to avoid compartment syndrome, and further studies are required to investigate more cases. More than two years have passed since these measures were implemented and not a single case of compartment syndrome has occurred.

Complications of vasculitis such as rheumatism, lengthy surgery, and lithotomy position may need to be considered as a risk of compartment syndrome.

HS, YK, and MK were major contributors in writing the article. HS, YK, ST, MO, RS, and KY made clinical examinations, performed surgery, and administered chemotherapy. NM supervised the project. All authors have read and approved the manuscript.

All subjects gave their informed consent for inclusion before they participated in the study.