Intravascular large B-cell lymphoma (IVLBCL) is a rare subtype of non-Hodgkin lymphoma with concentration of neoplastic cells in small- to medium-sized blood vessels [1]. IVLBCL is rarely detected in peripheral blood samples or lymph nodes but usually involves bone marrow and a variety of other sites, including the central nervous system (CNS) and skin [1]. There is no consensus for standardized treatment; most IVLBCL patients are treated with anthracycline-containing multiagent chemotherapy, radiation, and surgical resection. IVLBCL has an aggressive course and typically poor outcome. The diverse and unusual clinical presentations of this rare disease often lead to delays in diagnosis, worsening the poor outcome of these patients. Only eight other cases of uterine IVLBCL have been reported [2-9].

A 55-year-old woman with a history of hypertension, diabetes mellitus, and coronary artery disease presented to the emergency department with acute altered mental status. She had generalized weakness, fatigue and a 23-kg weight loss over several months. Head CT and MRI showed multiple small subacute infarctions in the central pons and only mild microvascular ischemia in the subcortical white matter. No masses were detected. A complete blood count showed pancytopenia (WBC 3.7×109/L, Hb 10.4 g/dL, PLT 24×109/L) with no blasts or lymphoma cells. Serum lactate dehydrogenase (LDH) was markedly elevated (13,11U/L), but there were no abnormalities in the serum electrolyte, liver function, and kidney function tests. A bone marrow biopsy attempt was unsuccessful due to the patient’s obese body habitus. A sternal marrow aspirate was adequately cellular and showed trilineage hematopoiesis with erythroid hyperplasia and minimal dysplastic changes. No evidence of any leukemia, lymphoma, or hemophagocytosis was seen microscopically or by flow cytometric evaluation. Chromosomal analysis showed loss of chromosome 21 in five of 20 cells examined.

Abnormal uterine bleeding led to an endometrial biopsy showing many large atypical lymphoid cells within small vessel lumina and endometrial stroma (Figures 1A and B). Flow cytometry was not performed, but immunohistochemical stains showed that the lymphoid cells expressed the B-cell markers CD20 (Figure 2A), PAX5 (Figure 2B), and CD79a, as well as CD5 and were negative for CD3, CD10, CD117, myeloperoxidase, TdT, and EBV/LMP1. The lymphoid cells were located in blood vessel lumens outlined by endothelial cells staining positive for CD34 (Figure 2C). No carcinoma was identified in this biopsy. No masses were detected on CT and MRI of the chest, abdomen, and pelvis. With a diagnosis of IVLBCL, the patient received R-CHOP multiagentchemotherapy. The first cycle led to improvement of her mental status, B symptoms, and uterine bleeding. A lumbar puncture showed no lymphoma in the cytospin sample and allowed intrathecal methotrexate administration. Six cycles of chemotherapy were completed. A post-therapy PET scan showed no evidence of lymphoma. Blood counts and LDH levels returned to normal. Then, a total abdominal hysterectomy with bilateral salpingo-oophorectomy (TAH-BSO) showed no residual IVLBCL, but did show a 2.2×1.1×0.2-cm polypoid lesion consisting of an invasive endometrial carcinoma, endometrioid type, Stage IA and FIGO Grade 1 (Figures 1C and D). Despite the initially favorable response to treatment, this patient died eight months after the initial diagnosis. No autopsy was performed. 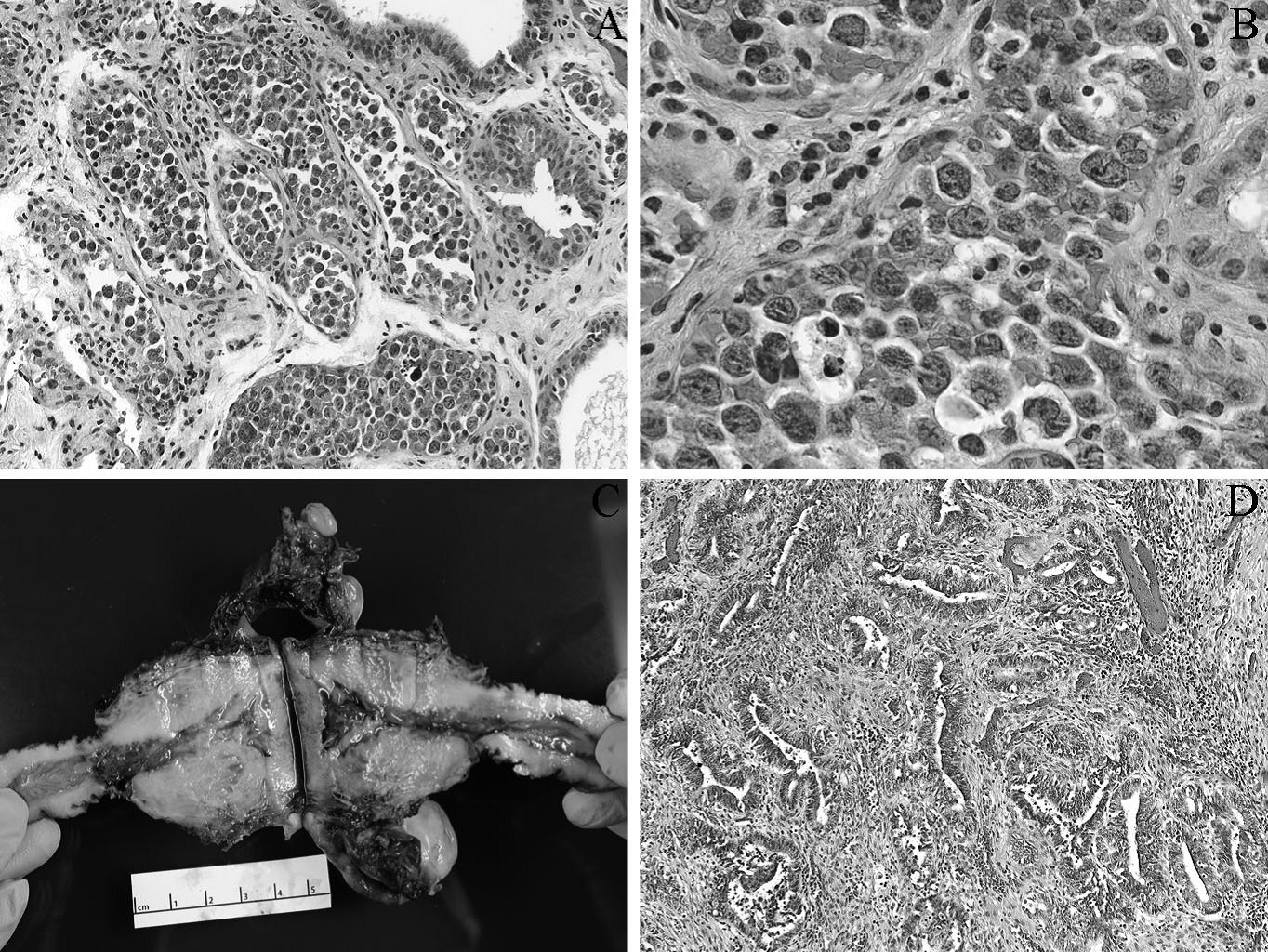 Many gynecologic tumors, including mesenchymal tumors, gestational trophoblastic tumors, and epithelial neoplasms can cause uterine bleeding, but endometrial carcinoma is the most common cause in the developed world. In this patient, the polypoid endometrial carcinoma found in the hysterectomy was not present in the initial curettage specimen. The patient’s uterine bleeding could have been caused by the lymphomatous involvement of the endometrial stroma and small vessel lumina, or, due to the polypoid carcinoma that was not sampled in the initial endometrial biopsy.

Hematopoietic neoplasms are uncommon causes of uterine bleeding. Leukemias occasionally cause uterine or vaginal bleeding due to severe thrombocytopenia. Excluding cases with extensive bone marrow involvement or prominent splenomegaly, lymphomas rarely cause thrombocytopenia. More aggressive lymphomas, such as large cell lymphomas, do occasionally involve extranodal sites and rarely infiltrate the uterus to cause bleeding. Accurate diagnosis of uterine lymphomas is essential, since treatment regimens depend mostly on chemotherapy rather than surgical resection.

IVLBCL is rare with a prevalence of less than one per million individuals. This disease has previously been classified as intravascular lymphomatosis, angiotrophic large cell lymphoma, and malignant angioendotheliomatosis. The 2008 World Health Organization Classification of Tumours of Hematopoietic and Lymphoid Tissues lists IVLBCL as a distinct entity [1]. As its name implies, these lymphoma cells proliferate within small blood vessels, typically spare lymph nodes, and do not form masses. Cases of IVLBCL are difficult to diagnose due to the unusual and inconsistent clinical presentations. Presenting symptoms do seem to differ by geographic location. In the Western Hemisphere, IVLBCL cases typically show neurological or cutaneous signs and symptoms caused by organ dysfunction from the lymphoma-induced small vessel occlusion. CNS involvement, which can be seen in up to 30% of patients at diagnosis, and, in 25% during disease progression, is manifested as acute or subacute neurologic signs, such as dementia and seizure and may be associated with cerebral vascular accidents. Cutaneous manifestations can vary from painful plaques or ulcerating nodules to palpable purpura. Compared with non-cutaneous disease, the cutaneous variant has been described mostly in younger female patients, and has a relatively favorable prognosis. Cases of IVLBCL in Asia typically present with multiorgan failure usually associated with hemophagocytic syndrome. Nakamura et al. proposed that IVLBCL could be classified based on presence or absence of hemophagocytosis instead of on geography, since IVLBCL without hemophagocytosis has more favorable prognosis [10].

The present patient had acute mental status changes with subcortical microvascular ischemia, clinically consistent with cerebral vascular occlusion by lymphoma [11]. Bone marrow aspirate examination failed to detect any evidence of lymphoma or hemophagocytosis, but the absence of a marrow core limited this analysis. Since marrow infiltration leading to marrow failure occurs often in IVLBCL, this process still represents a possible cause for this patient’s persistent pancytopenia. The clonal loss of chromosome 21 was a non-specific finding but could be seen in IVLBCL. The minimal dysplastic changes and adequate cellularity made myelodysplastic syndrome (MDS) and aplastic anemia unlikely.

Only eight cases of IVLBCL with uterine involvement have been reported [2-9]. Review of these cases (Table 1) showed that patients with only uterine and adnexal involvement at presentation who received chemotherapy [3, 5, 6, 9] usually had better survival than those who had multi-organ involvement initially or were not treated with chemotherapy [2, 4, 8]. Without chemotherapy, the overall prognosis for most IVLBCL cases is very poor, with a median survival of three months. The poor outcomes are due at least in part to delays in diagnosis. Therefore, early diagnosis plays an essential role in improving survival of patients with IVLBCL. Understandably, the diagnosis of IVLBCL cases is challenging due to the absence of an identifiable mass. Anemia is seen in most IVLBCL cases, therefore inconclusive laboratory studies might lead to a bone marrow and subsequent lymphoma diagnosis. Otherwise, few typical clinical triggers are present to prompt diagnostic testing for leukemia or lymphoma. Furthermore, the variable and often seemingly unrelated symptoms involving the nervous, cutaneous, hematopoietic or other organs do not neatly fit into a disease category. Reasonable differential diagnoses for these patients at presentation may include infectious, autoimmune, rheumatologic, and endocrine diseases in addition to hematopoietic disease.

Several modalities for early detection of this disease have been proposed. Matsue et. al. found that random skin biopsies in suspected patients had a high sensitivity (83.3%) for antemortem diagnosis [12]. Another group proposed an early diagnostic strategy using a panel of factors including age, fever, performance status, blood LDH/sIL2R level, and presence of atypical lymphoid cells in blood or bone marrow, to begin treatment in patients highly suspicious for IVLBCL before histological diagnosis [13]. There are also some reports on FDG-PET imaging of IVLBCL, employing increased glucose metabolism in tumor cells, given that IVLBCL rarely forms detectable masses or lymphadenopathy as lymphomas usually do [14]. With this approach, IVLBCL can be detected relatively early, guide biopsy in unexpected sites, and assess response to therapy. While false negative findings were reported in several cases, FDG-PET may be repeated as the disease progresses to increase sensitivity [14]. Since the present patient had uterine symptoms, an endometrial biopsy was performed which revealed findings diagnostic for IVLBCL.

Rituximab combined with anthracycline-based chemotherapy (e.g. R-CHOP) represents the cornerstone of IVLBCL treatment. Two-year overall survival rate was improved from 46%, with CHOP therapy alone to 66% with addition of Rituximab. For patients with CNS involvement, it is recommended that CNS directed therapy using drugs with high CNS penetration be added to benefit survival. In addition, auto-hematopoietic stem cell transplantation following high-dose chemotherapy is an option to consider for young patients.

One of eight reported uterine IVLBCL had a co-existing uterine myoma [6]. An invasive endometrial carcinoma, endometrioid type, was identified in the present patient after remission of the IVLBCL. Since IVLBCL is a systemic disease, lymphoma recurrence could have occurred at any site and would have been difficult to detect. Her immediate cause of death remains undetermined as no autopsy was performed. Any interaction between this patient’s two neoplastic diseases, and her underlying disease states, is uncertain and would be impossible to determine without cytogenetic and molecular studies. Interestingly, Uchiyama et al. also reported a case of serous carcinoma overlapping with IVLBCL in ovary [15].

In conclusion, the present authors described a case of abnormal uterine bleeding associated with IVLBCL and an accompanying endometrial carcinoma, endometrioid type, involving the uterine endometrium. IVLBCL is a rare and aggressive lymphoma which is difficult to diagnosis and has a dismal prognosis. The present findings highlight the importance of histology and immunohistochemistry in diagnosis of IVLBCL, when involved organs can be evaluated, allowing for early initiation of R-CHOP-based individualized therapy.