Endometrial cancer is the most common gynecologic malignancy in the United States. In 2014, 52,630 women were diagnosed with uterine cancer and 8,590 died from their disease [1].

Because women often present with abnormal uterine bleeding, 75% are diagnosed at an early stage, leading to a favorable prognosis [2]. Most women are diagnosed after menopause, at an average age of 60-years-old. The major risk factor is unopposed estrogen, either from obesity or from exogenous estrogen given without simultaneous progestin administration [3]. This is consistent with the fact that Type 1, estrogen-dependent cancer, is the most common variety.

The staging of endometrial cancer has undergone significant change over time, and it is currently staged surgically according to the 2010 International Federation of Gynecology and Obstetrics (FIGO)/TNM classification system. This system calls for routine total extrafascial hysterectomy with bilateral salpingo-oophorectomy with both pelvic and para-aortic lymph node dissection [4]. To achieve accurate disease assessment, extensive surgical staging is done in all patients in some centers. Under the current staging standards, many patients suffer the associated morbidity of the extensive surgery without an improvement in their survival.

If there was a strategy to stratify patients into likelihood of extra-uterine spread, then costly and unnecessary surgical staging procedures could be avoided. In these low-risk patients, hysterectomy and bilateral salpingo-oophorectomy could be performed without the risk of missing advanced disease. The purpose of this paper was to analyze whether CA 125 could be used to help stratify patients with preoperative Grade 1 endometrial cancer into those at risk for metastases and those not as risk or at extremely low risk.

This study was approved by the institutional review board. CA 125 was ordered on all patients with endometrial cancer since 2000. Data were collected on all patients with undergoing surgery for Grade 1 endometrial adenocarcinomas from July 2003 until December 2013. Only patients who underwent full surgical staging were included in analysis. There was no differentiation of data by procedure used for diagnosis (office biopsy versus dilation and curettage). All specimens were reviewed by a gynecologic pathologist and at institutional tumor boards before surgery.

Statistical analyses were conducted using the SPSS. The independent t-test was used to compare baseline variables and Fisher’s exact test to analyze categorical and normally distributed numerical data. The Shapiro-Wilk test was used to test for normality, and for data with a skewed distribution, the Mann-Whitney U test was used. A p value of 0.05 was considered significant, corresponding to 95% confidence intervals (CIs). All tests were two-tailed. Results for normally distributed numerical data are presented as the mean with standard deviation (SD), and results for skewed numerical data are presented as the median. 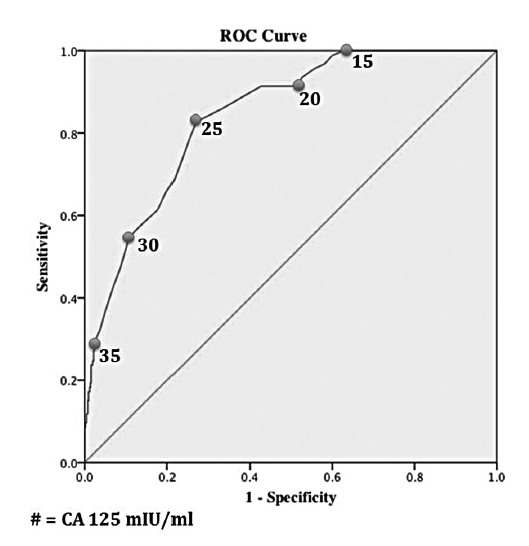 — Receiver operator characteristic (ROC) curve showing the sensitivity and 1-specificity for various CA 125 levels. At a CA 125 of below 15 mIU/ml, there are no positive lymph nodes found (100% sensitivity).

CA 125 is a tumor antigen first discovered in 1981 when it was found to be elevated in the serum of patients with epithelial ovarian cancer [10]. Since then, it has become key in the management of patients with ovarian cancer, and is now widely used to predict treatment response and prognosis. Several years after its discovery, CA 125 was found to be elevated not only in ovarian cancer, but also in patients with recurrent or widespread endometrial cancer [11], and was suggested as a method of follow up in patients after treatment of endometrial cancer. In 1997, Sood et al. found that CA 125 was the most significant predictor of extrauterine disease, correlating with not only increasing stage, but also increasing grade, positive peritoneal cytology, and positive pelvic nodes [12]. These results led to the proposal that CA 125 should be part of the preoperative workup for uterine cancer and help guide treatment decisions. Sood et al. predicted that by considering vaginal hysterectomy alone for patients with a CA 125 less than 20 U/mL and favorable histology, 24% of staging surgeries could be prevented with only a 3% risk of extrauterine disease [12]. Sood et al. also found that CA 125 levels correspond with survival rates, and therefore could serve an important prognostic role [12]. Although CA 125 is now commonly incorporated into the preoperative workup, it is not routinely used to plan for the degree of surgical staging. In this study, the authors assessed CA 125 in patients with Grade 1 endometrial cancer, and showed that preoperative CA 125 levels can be used to avoid lymphadenectomy in patients with low-risk of nodal metastases.

— Receiver operator characteristic (ROC) curve showing the sensitivity and 1-specificity for various CA 125 levels. At a CA 125 of below 15 mIU/ml, there are no positive lymph nodes found (100% sensitivity).