Cervical cancer is the fourth most common cancer in women [1]. One in every five women suffering from cervical cancer belongs to India [2,3]. The global burden occurs in developing countries - 13% of all female cancers. It is a largely preventable disease primarily because of its long lead time (gradual progression of precancerous lesions through recognizable stages before developing into full blown invasive disease).

In this study, an attempt has been made to screen for cervical cancer in all sexually active females attending Gynaecology OPD, segregate operable and inoperable cases, study varying operative management of diagnosed cases of cervical cancer, and study the outcome and complications of the same.

This was a prospective study carried out in the Department of Obstetrics and Gynaecology in a tertiary care referral hospital in urban Mumbai, from January 2011 to December 2016. A total number of 36,100 patients attended the Gynecology OPD during the study period.

All sexually active females attending the Gynaecology OPD with complains of per vaginal discharge, post-menopausal bleeding, post coital bleeding, intermenstrual bleeding or reproductive tract infection were included in the study. Patients not willing to participate in the study, women who have never been sexually active, and pregnant women were excluded.

All patients included in the study underwent a general examination followed by gynaecological examination which included per speculum, per vaginal, and a Pap smear. Patients with neoplastic Pap smear reports underwent examination under anaesthesia (per speculum, per vaginal, and per rectal examination) followed by cervical biopsy and cystoscopy. Each of these patients was staged clinically as per the FIGO 2009 staging for cervical cancer and the treatment was decided accordingly. Being an observational study, only percentage calculations were used in this study.

During the study period, the maximum number of women screened belonged to the age group 30-39 years (35.9%), 66% were multiparous (> 2 issues), 77% belonged to lower socio-economic class, 63% of the patients were pre-menopausal, and 37% were post-menopausal. Abnormal vaginal discharge was the presenting complaint in 87%. While analysing the risk factors for cervical cancer, 53% had first coitus before the age of 20 years, 85% were users of oral contraceptive pills., and 93% were tobacco users.

On cervical biopsy, there were 124 squamous cell carcinomas and 18 adenocarcinoma cases diagnosed. The non-neoplastic Pap smears included inflammatory smears and atrophic smears. After cervical biopsy, 84.61% were confirmed to have cervical cancer. (Table 2).

On histopathology, 83.78% had squamous cell carcinoma, 12.1% had adenocarcinoma, and 4.05% had adenosquamous carcinoma. (Table 3) The incidence of cervical carcinoma in this cohort (after confirmation on cervical biopsy) was 0.40%. Thus, the sensitivity of Pap smear cytology proved to be 84.57%.

Cervical cancer is the second most common cancer worldwide and the most common cancer among women in most developing countries in Asia, Africa, and Latin America [4]. Globally cervical cancer cases increased from 3,78,000 to 5,28,000 per year during the period from 1980 to 2012, reflecting a 0.6% annual increase [5]. It is the most common cause of cancer death among women in India [6], because of high HPV infection rates and lack of comprehensive cervical Pap smear testing of susceptible women [7,8]. An estimated 122,844 new cases and 67,477 deaths due to cervical cancer occurred in India in 2014, contributing 26% and 27% to the global cervical cancer incidence and mortality, respectively [9]. The peak age of incidence of cervical cancer is 55-59 years, and a considerable proportion of women report in the late stages of disease (Figure 1) [9, 10]. However, the peak incidence in present study was seen in age group of 40-49 years. 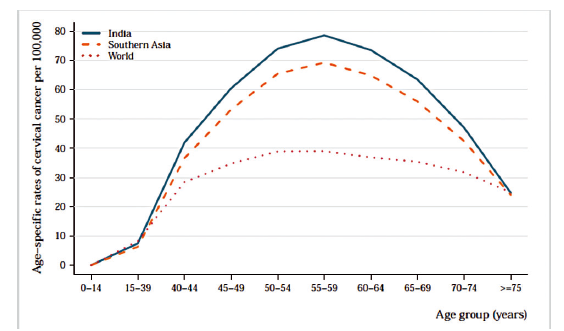 — Age-specific Incidence rate in India and in the World.

The changing risk profile in successive generations, improved education, higher socioeconomic status, later age at marriage and at first child, and lower parity may in combination, partially explain the diverging generational changes in breast and cervical cancer in Mumbai in the last decades [11].

The majority of factors related to cervical cancer are associated with sexual behaviour [12]. Other risk factors are smoking, having multiple sex partners, cervical infections, early onset of sexual intercourse, multiple parity, and lack of awareness [13]. It is well-established that HPV infections play a critical role in the development of cervical cancer [14]. The most prevalent types of HPV in cervical cancer in India are HPV 16 and HPV 18, found in 60.7% and 16% of cases, respectively [15]. A large number of women infected with oncogenic HPV types will never develop cervical cancer. Thus, there are several external environment and genetic factors involved in the progression of a precancerous lesion to invasive cancer.

Fertility preservation can be offered to patients with early-stage cervical cancer through radical trachelectomy, although radical hysterectomy remains the surgical standard of care [16]. In this study all 15 patients with Stage 1b and 2a underwent radical hysterectomy with pelvic lymph node dissection. Concurrent chemotherapy with radiation has been shown to have a survival advantage in patients with advanced-stage disease [16]. Cisplatin based chemotherapy is the most cost effective regimen for the treatment of these patients especially since the GOG 204 also showed statistically significantly improved survival for cisplatin regimes [17]. Improvements in radiation techniques and molecular targeted therapy are the current research venues in cervical cancer.

Cervical cancer screening offers unique opportunities for prevention at both the primary and secondary levels [18]. A comprehensive strategy with a judicious mix of interventions on health promotion, specific protection (vaccination), early diagnosis (screening), and treatment should be instituted to prevent and control cervical cancer in India. Specific knowledge on cervical cancer screening is a critical element in determining whether a woman will undergo Pap test in addition to making cancer screening facilities available in the primary health centre. In this study the sensitivity of Pap smear proved to be 84.57%, providing more evidence that Pap smear screening is not feasible in India, we need to develop effective alternatives [7,19]. Visual inspection with acetic acid (VIA) screening by primary health workers statistically significantly reduced cervical cancer mortality. The Pap smear showed lowest sensitivity, even at the lowest cut-off of atypical squamous cells of undetermined significance [19].

Women continue to be afflicted by a disease that is potentially preventable and treatable when detected early. Those who are lost to screening or who do not receive screening at all are most susceptible to the development of cervical cancer. Where countries like USA are celebrating a substantial decrease in HPV infection owing to their immunization programme, India still lacks a comprehensive screening programme. Federation of Obstetric & Gynae-cological Societies of India (FOGSI) has presently started “Connecting The Dots” program through their 15 centres spread all over India for compiling the data of cervical cancer patients. FOGSI has also started Pratishruti - FOGSI - FIGO - MSD Programme in 2017 which aims at training gynaecologists in Pap smear and colposcopy across the country, and about the latest updates on prevention, diagnosis, and treatment of cervical cancers.

— Age-specific Incidence rate in India and in the World.