The process of fertilized egg implantation and embryo formation includes embryonic adhesion to the uterine wall, proliferation and migration of embryonic trophoblast cells, and invasion of trophoblast cells into the endometrium [1, 2], abnormalities in this process can cause placental trophoblast hypoxia, leading to placental ischemic disease, which can lead to placental ischemic disease (PID), such as intrauterine growth retardation (IUGR), placental abruption, and preeclampsia (PE) [3, 4]. PE is an idiosyncratic condition during pregnancy and is an important cause of maternal and fetal morbidity and mortality [5, 6], and delivery of the placenta and fetus is the only way to cure PE [7]. It is estimated that PE occurs in 3%~7% of pregnant women worldwide, and the exact pathogenesis of preeclampsia remains unclear to date [8].

RNA motif binding proteins (RBM) are a family of proteins with a stable three-dimensional structure that recognize and bind to RNA, and are involved in the regulation of various physiological or pathological processes such as cell autophagy, proliferation, and apoptosis [13, 14]. Numerous studies have found striking similarities in the biological properties of normal placental trophoblasts and tumor cells [15]. Some studies have reported that RBM10 and related proteins are differentially expressed in glioma cells as well as lung adenocarcinoma cells and have an important regulatory role in apoptosis [16, 17]. Other groups have also found that RBM-related proteins are abnormally highly expressed in placental trophoblast cells intervened by hypoxia in vitro and induce autophagy and apoptosis, promoting the development of PE, but the specific role in PE development and progression has not been further explored [16, 18], and whether it regulates trophoblast apoptosis through activation of the endoplasmic reticulum stress pathway needs to be further investigated.

Total proteins were extracted from the above three groups of embryonic trophoblast cells using RIPA buffer and protease inhibitor (CW2200S, CWBIO, Taizhou, Jiangsu, China), respectively, the tissues were lysed, and the cells were centrifuged (12 000 r/min) at 4 °C for 20 min, separated by 10% gel electrophoresis, and then transfected onto PVDF membranes (IPVH00010, Millipore, Burlington, MA, USA). The PVDF membranes were transferred in an ice bath at 350 mA with a constant flow, and the RBM10 protein was transferred for 3 h. Afterwards, the PVDF membranes were removed and placed in a closure solution (5% skim milk) and closed in a shaker at room temperature for 1 h. Then, the membranes were incubated with the corresponding primary antibody (1:1000) for 12 h at 4 °C and then with the secondary antibody (1:1000) for 1 h at room temperature. All Western blots were repeated 3 times using Tublin as an internal reference. Changes in protein levels were expressed by protein bands in grayscale values, and the data were processed by Image J software (version 1.8.0, LOCI, University of Wisconsin, Madison, WI, USA) and represented as bar graphs. Antibodies were as follows: rabbit anti-C/EBP-homologous protein (CHOP) (SAB4500631), rabbit anti-endoplasmic reticulum to nucleus signaling 1 (ERN-1) (HPA027730), mouse anti-microtubule-associated protein 1 light chain 3 (LC-3) (WH0081631M1), rabbit anti-Beclin-1 (PRS3611), rabbit anti-P62 (P0067), rabbit anti-Bcl-2 (B cell lymphoma-2) (SAB4500003), rabbit anti-Bcl2-associated X protein (Bax) (SAB5701392) and rabbit anti-Active-Caspase3 (MAB10753) (Sigma, St. Louis, MO, USA).

Transwell chambers were placed in 24-well plates, and 50 L of Matrigel dilution was spread on the bottom of the upper chamber base and placed in a cell culture incubator for 2–3 h to promote solidification. The above three groups of embryonic trophoblast suspensions (density 1 10 cells/mL) were added to the upper chamber for 200 L, and RPMI 1640 medium containing 10% fetal bovine serum was added to the lower chamber, and the culture was continued for 24 h at 37 °C in a 5% CO incubator, the membranes were washed, formaldehyde fixed for 30 min, crystalline violet stained for 5 min, photographed under the microscope, and six different fields of view were randomly taken (200) to observe and record the number of membrane piercing cells, the experiment was repeated three times, and the average number of cells in each group of small chambers was manually calculated.

The above three groups of embryonic trophoblast cells at logarithmic growth stage were digested by trypsin and made into single cell suspensions, which were counted and inoculated in 96-well plates with 100 L of single cell suspensions at a density of 2.5 10 cells per well. The cell proliferation assay reagent (10 L CCK-8 + 90 L medium) was added after aspirating the original medium under light-proof conditions at 0 h, 24 h, 48 h and 72 h after cell apposition, respectively, and the cells were incubated in the cell culture incubator for 2 h, and the absorbance A450 at 450 nm was detected by an enzyme marker, and the corresponding survival curves were plotted. The experiment was repeated three times.

Apoptosis was detected with Annexin V-FITC Apoptosis Detection Kit I (331200, Thermo Fisher Scientific, Richardson, TX, USA). Annexin V binding buffer was added to the recovered cells. Annexin V/FITC mix was then added to the cell suspension. PI dye was incubated in the dark for 15 min before apoptosis analysis was performed by flow cytometry. This experiment was performed three times.

All experimental data in this study were performed using SPSS 18.0 software (IBM Corp., Chicago, IL, USA). The one-way ANOVA analysis was done to determine any difference between two groups, and differences between groups further assessed using Student T-test. Data are expressed as s, and p 0.05 was considered statistically significant.

3. Results
3.1 Effect of RBM10 on Proliferation and Migration Capacity of Embryonic Trophoblast Cells Effect of RBM10 on the proliferation ability of embryonic trophoblast cells. 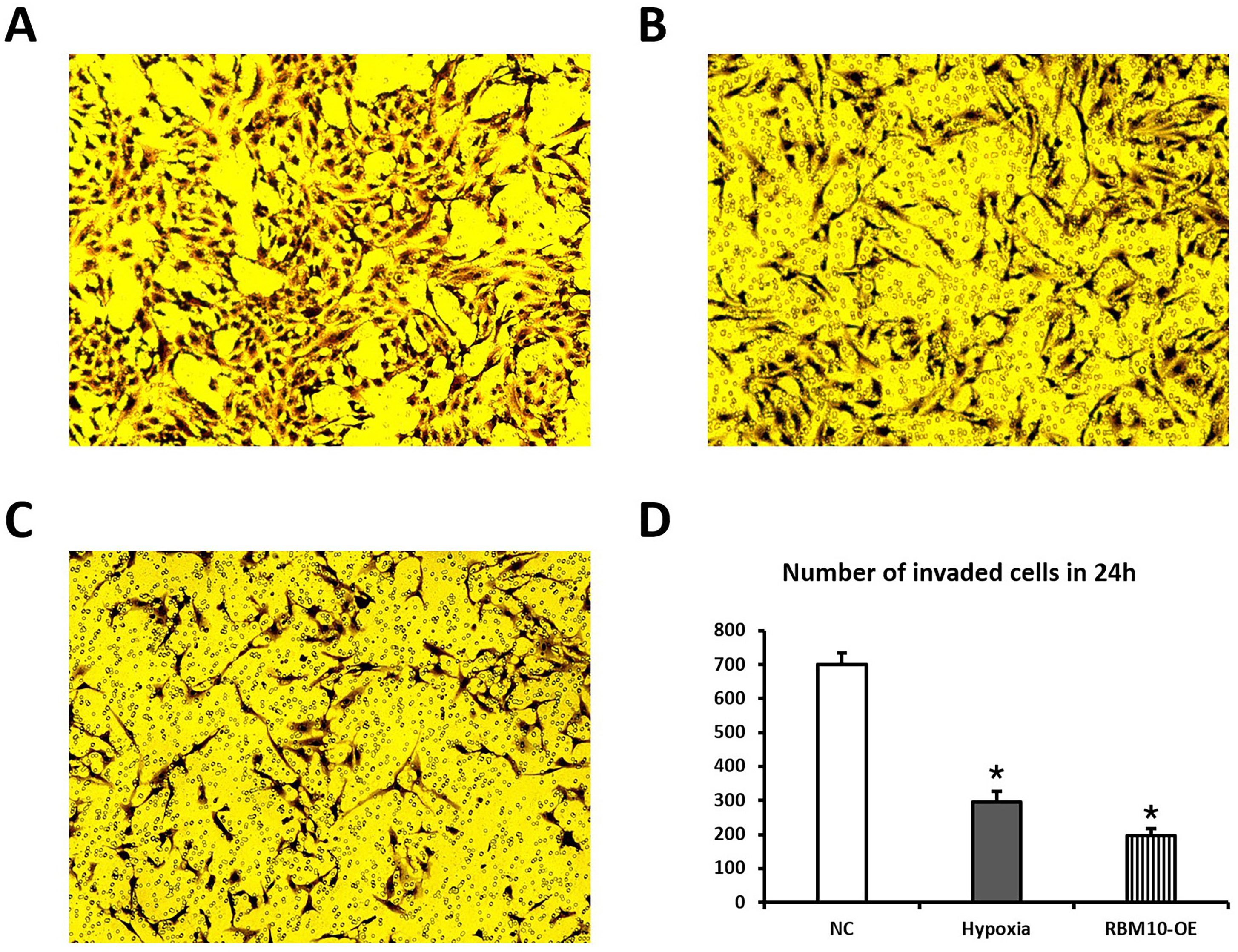 Effect of RBM10 on the expression levels of endoplasmic reticulum stress-related proteins in HTR-8 cells. (A) Expression levels of CHOP and ERN-1 in the NC, Hypoxia and RBM10-OE groups were detected by western blot assay. (B) Image J software was used to analyze the signals, the relative protein expression was normalized by Tublin expression, * p 0.05, ** p 0.01.

3.3 Effect of RBM10 on Apoptosis of Embryonic Trophoblast Cells 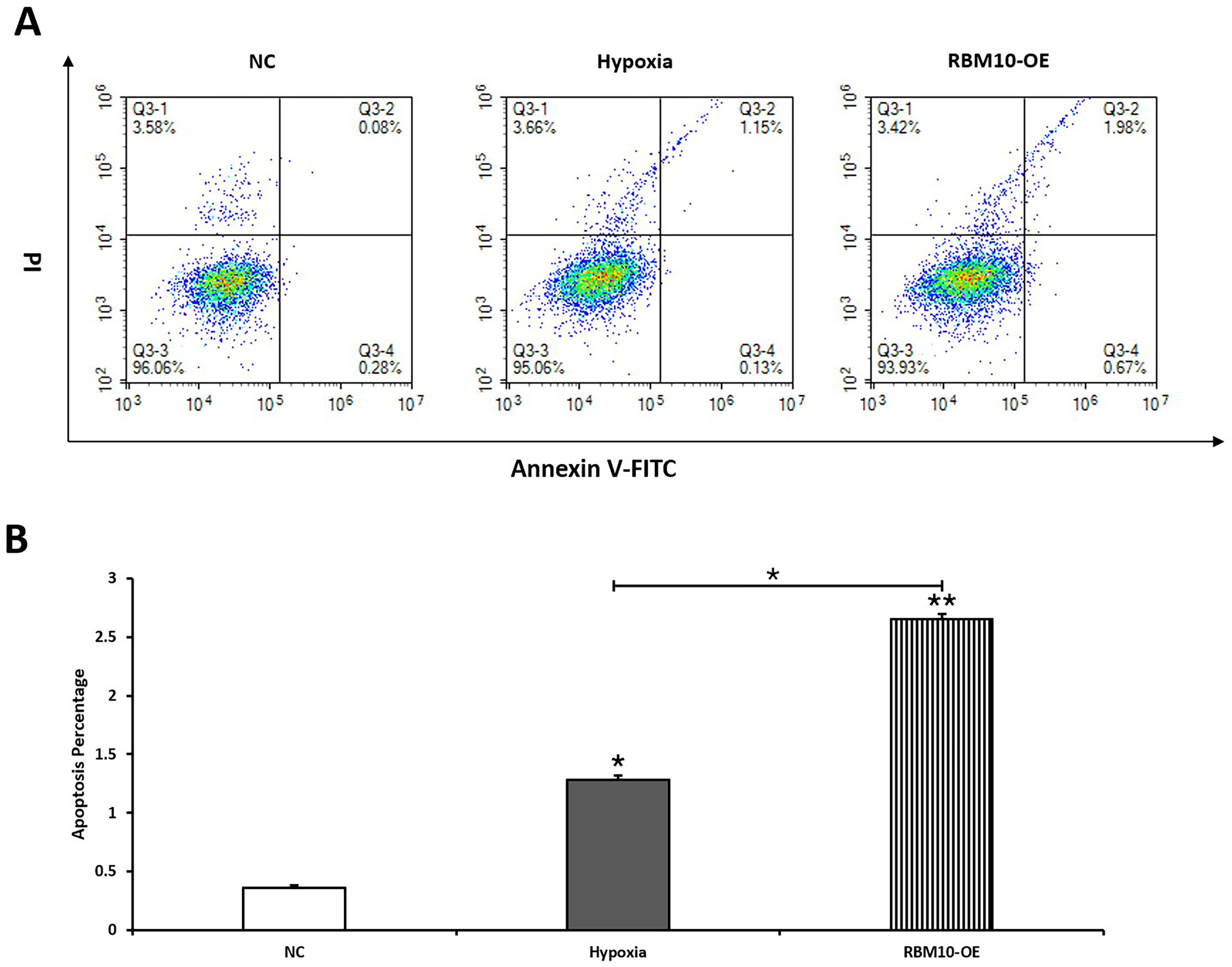 The effect of RBM10 on the apoptotic function of trophoblast cells detected by flow cytometry. (A) Flow cytometry assay detected the percentage of apoptotic cells in the NC, Hypoxia, and RBM10-OE groups. (B) The early and late apoptosis were quantified, * p 0.05, ** p 0.01.

Effect of RBM10 on the expression level of apoptosis-related proteins in HTR-8 cells. (A) Western blot assay detected the expression of Bcl-2, Bax, as well as Caspase-3 in the NC, Hypoxia, and RBM10-OE groups. (B) Image J software was used to analyze the signals, the relative protein expression was normalized by Tublin expression, * p 0.05, ** p 0.01.

3.4 Effect of RBM10 on Autophagy in Embryonic Trophoblast Cells

Effect of RBM10 on the expression levels of autophagy-related proteins in HTR-8 cells. (A) Western blot assay detected the expression of LC-3, Beclin and P62 in the NC, Hypoxia, and RBM10-OE groups. (B) Image J software was used to analyze the signals, the relative protein expression was normalized by Tublin expression, * p 0.05, ** p 0.01.

PE is a serious pregnancy complication with an incidence of approximately 2%~8% of all pregnancies and may result in maternal and fetal death [19]. Currently, the etiology and pathogenesis of PE are unclear, and iatrogenic termination is the only treatment for PE [20]. Existing studies have shown that in the early stages of pregnancy, embryonic development and placental formation take place under relatively hypoxic conditions, and trophoblast blockage of the uterine spiral artery causes a hypoxic environment that can promote vascular recasting and trophoblast differentiation and invasion, thus ensuring normal pregnancy; however, when hypoxia is excessive, it causes chronic ischemia and hypoxia in the placenta in late pregnancy, leading to PE, fetal growth restriction, miscarriage, stillbirth, and other adverse pregnancy outcome [21, 22, 23]. During early pregnancy, trophoblast cells infiltrate into the maternal uterus to form the placenta through tumor-like properties (high proliferation and high infiltration). However, the mechanisms by which hypoxia regulates the physiological function of placental trophoblast cells are not known [24], and placental trophoblast apoptosis may be a key factor in the pathogenesis of PE.

RNA motif binding proteins recognize and bind to RNA and play an important role in RNA translation, shearing and maintaining RNA stability. In addition, it was found that RBM-related proteins are also closely associated with tumor development and prognosis, and RBM10 is associated with the expression of apoptotic genes such as caspase-3 and Bax, which are key regulators of apoptosis [17]. In this study, we used a cellular hypoxic chamber device to simulate a PE hypoxic environment and constructed an RBM10 overexpression system to observe the effects of overexpression of RBM10 and hypoxia on the proliferation and invasion capacity, endoplasmic reticulum stress, apoptosis and autophagy of HTR8 cells. We found that hypoxia inhibited the proliferation and invasion ability of HTR-8 cells, and led to a significant increase in apoptosis. In addition, we found that overexpression of RBM10 further inhibited the growth and migration of HTR-8 cells and further promoted hypoxia-induced apoptosis in HTR-8 cells.

In conclusion, the results of this study show that overexpression of RBM10 induces apoptosis in trophoblast cells and reduces the proliferation capacity of trophoblast cells, and its mechanism of apoptosis induction may be related to the endoplasmic reticulum stress pathway. The findings provide a new perspective for understanding the etiology and pathogenesis of PE, and provide a new breakthrough for the early prediction and diagnosis of PE.

XC—extraction and drafting of the manuscript; XC, JD, LYC, LLW and GX—analysis of data, manuscript revision; GX—design and revision, statistical analysis. All authors read and approved the final manuscript.

The Ethics approval has been exempted by the Research ethics committee of the Second Hospital of Shandong university.

Effect of RBM10 on the proliferation ability of embryonic trophoblast cells.