Pulmonary embolism (PE) is a life-threatening condition that can complicate about 0.15 per 1000 deliveries [1]. Pregnancy is associated with the increased risk of thrombosis, and cesarean section further increases the risk via vascular injury and immobilization [2]. Treatment options for PE associated with pregnancy are thrombolysis, percutaneous thrombectomy, surgical thrombectomy, extracorporeal membrane oxygenation (ECMO), and anticoagulation therapy [3, 4]. In postpartum periods, the risk of bleeding following these treatments is high, and many authors have reported hemoperitoneum or acute vaginal bleeding following such treatments [5, 6, 7, 8]. However, there have been no reports about massive hematoma following postpartum PE in the Retzius space caused by anticoagulation therapy that were severe enough to cause acute kidney injury. In this report, we present a case of obstructive uropathy associated with a Retzius space hematoma following PE treatment in the postpartum period.

A 30-year-old multigravida woman (2-0-0-2) was referred to our hospital for syncope on the first postoperative day following cesarean section. At that time of the visit, her blood pressure had decreased to 70/40 mmHg, and her heart rate had increased to 135 bpm (Fig. 1). Her shock index was 1.9 [9], and her serum hemoglobin (Hb) had decreased to 8.2 g/dL. However, there was no sign of vaginal bleeding, and uterine contraction was normal. Arterial blood gas analysis showed a pH of 7.38, pCO2 of 33 mmHg, pO2 of 51 mmHg, and an 85% O saturation. Well-defined filling defects in both main pulmonary arteries were seen on enhanced spiral computed tomography done to reveal the PE. Echocardiography revealed dilatation and dysfunction of the right ventricle and a D-shaped left ventricle, suggesting congestive heart failure. Abdominal computed tomography showed no sign of hematoma or hemoperitoneum in the abdominal cavity. The patient underwent ECMO with heparinization. Four units of packed red blood cells (pRBCs) were transfused, and subsequent Hb was elevated to 9.1 g/dL. 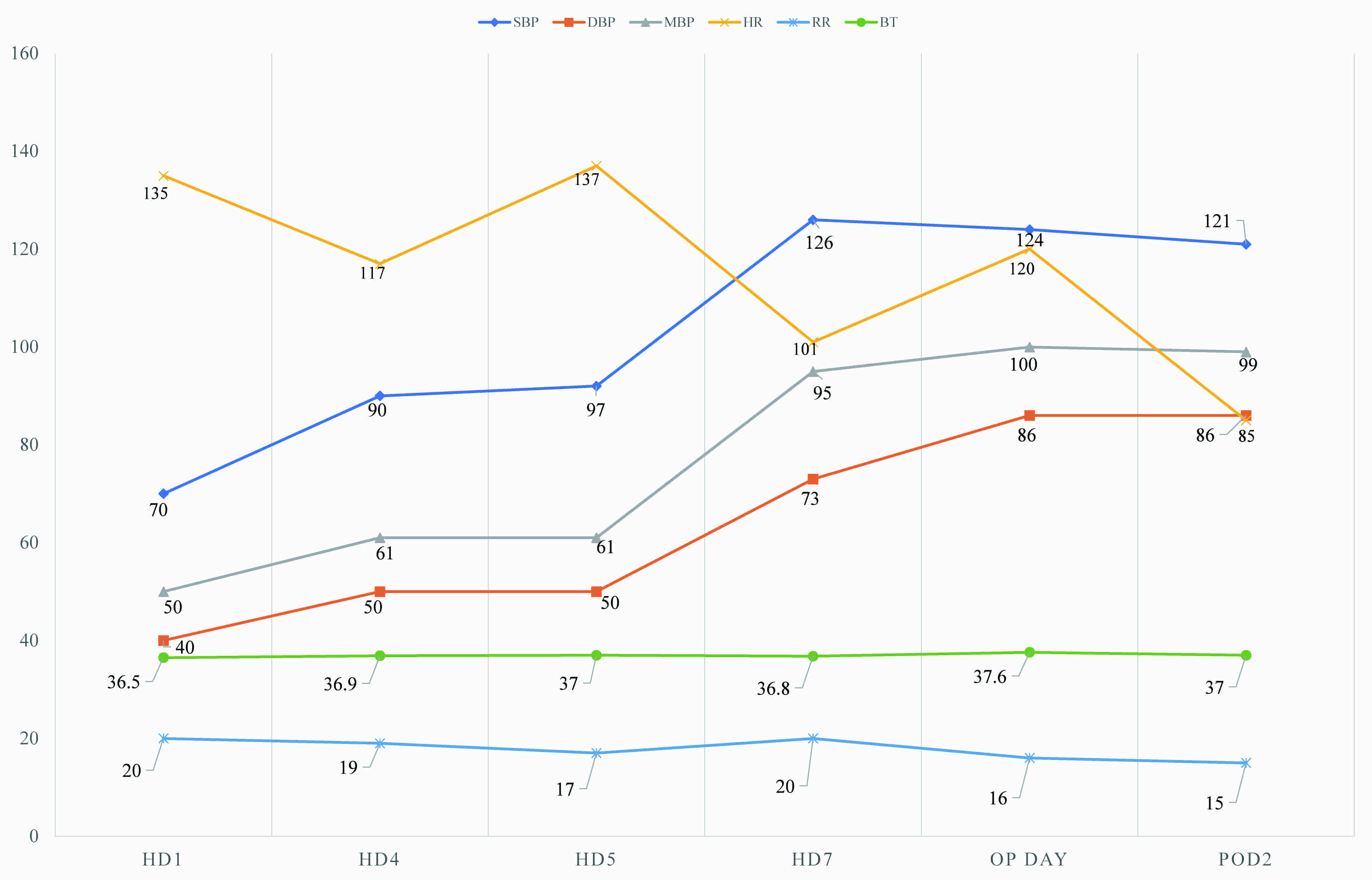 On day 4, she developed severe hematuria. Her serum creatinine (Cr) was elevated to 1.09 mg/dL and her serum hemoglobin (Hb) was decreased to 7.8 g/dL. She complained of low abdominal pain and tenderness. Rebound tenderness in the lower abdomen was noted on physical examination as well. Ultrasonography revealed a 15.6 11.8 8.9 cm-sized newly developed hematoma at the anterior side of the uterus. Transarterial embolization of the right internal iliac artery and the left uterine artery was performed for suspicion of bleeding at the surgical site, and 4 units of pRBCs were transfused. ECMO and heparin were discontinued, but peripheral angiogram done on removal of the ECMO catheters revealed a thrombus in the right femoral vessel. She underwent a surgical thrombectomy, and anticoagulation with low-molecular-weight heparin was restarted.

Despite transarterial embolization and thrombectomy, on day 5 her urine output decreased to less than 500 mL/day with an estimated glomerular filtration rate of 22.0 mL/min/m, serum creatinine 2.46 mg/dL and a fractional excretion of sodium of 0.4. Her heart rate was raised to 137 bpm and her blood pressure was 92/50 mmHg. Transabdominal ultrasonography was performed to rule out active bleeding at the site of the hematoma. However, there was no increase in the size of the hematoma anterior to the uterus as compared to that of the previous day. Serum Hb was 8.8 g/dL, and 10 units of pRBCs and 3 units of fresh frozen plasma were transfused. Because of the suspicion of contrast-induced nephropathy following peripheral angiogram, she underwent immediate renal replacement therapy with intermittent hemodialysis. The renal replacement therapy was discontinued on day 7 when her serum creatinine had become normalized to 0.75 mg/dL and her urine output had increased.

However, on day 10, her serum creatinine increased again to 2.52 mg/dL. She showed tachycardia with a heart rate of 120 bpm, and her hemoglobin was decreased to 7.5 g/dL. Low-molecular-weight heparin was discontinued, and then an inferior vena cava filter was inserted. Two units of pRBCs and two units of fresh frozen plasma were transfused. Computed tomography (CT) angiogram revealed not only a 15-cm hematoma anterior to the uterus, but also another 17-cm hematoma in the retroperitoneal space under the left kidney, as well as both hydronephrotic kidneys (Fig. 2).

Exploratory laparotomy was performed for obstructive uropathy. A 20-cm sized hematoma was located anterior to the bladder in the Retzius space. It extended to left retroperitoneum via the left broad ligament. There was no visible vascular injury, but there was uterine incision site bleeding. Blood oozed from the surface of the transversalis fascia. The Retzius space hematoma was evacuated, the surface of the fascia was coagulated, and the retroperitoneal hematoma under the left kidney was removed (Fig. 3). Imaging during exploratory laparotomy. (A) White arrow indicates hematoma in the Retzius space. (B) No visible hematoma or hemoperitoneum in the pelvic cavity.

The patient’s vital sign stabilized one day following surgery. Her serum creatinine and hemoglobin were normalized after two days (0.66 mg/dL and 11.3 g/dL, respectively), and her urine output was increased. The patient was discharged from a hospital after three weeks without significant complications.

PE is more prevalent in pregnancy and the postpartum period than it is in the general population. However, deciding on a treatment for this population is challenging because of the paucity of evidence from randomized controlled trials or large case series to guide treatment decisions [10]. In general, recommended treatments for massive PE are intravenous thrombolysis, catheter-based embolectomy, or surgical embolectomy. Recent systematic reviews concerning treatment options for severe PE during pregnancy and in the postpartum period found that 83 out of 127 cases of severe PE has been treated with thrombolysis [4]. However, thrombolysis in the postpartum period led to more than an eight-fold increased incidence of major bleeding as compared to non-pregnant patients [4]. In patients who are incapable of undergoing systemic thrombolysis, or who are hemodynamically unstable, ECMO can be used to improve oxygenation and enhance hemodynamic stability [11]. In our case, ECMO with heparinization was initiated without thrombolysis, not only because of her hemodynamic instability, but also because of a high bleeding risk. Unfractionated heparin was also administered because it is a routine practice to administer heparin to ECMO patients due to high risk of thrombosis during ECMO support [12]. Due to anticoagulant property, heparin can cause hemorrhage, and also abnormal aggregation of platelets called heparin- induced- thrombocytopenia [13, 14]. In the present case, we experienced a rare case of kidney injury caused by a Retzius space hematoma that extended into the retroperitoneal space following ECMO with heparinization.

In the present case, the patient gave birth via cesarean section because she had previously undergone planned cesarean section due to maternal request. The rate of cesarean section is increasing overt time worldwide, mostly due to increasing maternal age or fear of vaginal delivery [18]. However, cesarean section not only cause acute complications such as Retzius space hematoma, but also increase the risk of abnormal placentation or uterine rupture in a subsequent pregnancy and can lead to pelvic adhesion or chronic pelvic pain [19]. Therefore, physicians should be aware that cesarean sections are effective in reducing maternal or newborn mortality only when they are required for a medical indication [18], and discuss thoroughly about the risk and benefit with the patient. To our knowledge, this is the first case of acute kidney injury caused by a Retzius space hematoma that extended into the retroperitoneum in a postpartum patient with PE, who had been treated with ECMO and heparinization without thrombolysis. When treating postpartum patients with PE, physicians should be aware of the possibility of a concealed hemorrhage in the Retzius space and of subsequent kidney injury.

All subjects gave their informed consent for inclusion before they participated in the study. The study was conducted in accordance with the Declaration of Helsinki, and the protocol was approved by the Ethics Committee of Chungnam National University Hospital (2020-07-070).

The authors declare no conflict of interest. HJY is serving as one of the Editorial Board and Guest Editors of this journal. We declare that HJY had no involvement in the peer review of this article and has no access to information regarding its peer review. Full responsibility for the editorial process for this article was delegated to MHD.