The formation of a vesicovaginal fistula (VVF) is a devastating condition that may arise after obstructed labor in developing world including Sub-Saharan Africa [1, 2, 3]. This condition and the often-associated rectovaginal fistula (RVF) both can have devastating social conditions on top of the known physical morbidity [4]. Women with these conditions often become social pariah. Surgically correcting these issues is important physically, socially, and culturally [5]. However, resources are lacking in many developing countries in Africa to adequately repair the fistulas that are present [6, 7]. Furthermore, the fistulas present after obstructed labor may be more complex and multiple in nature than initially seen. Complex fistulas may also arise after hysterectomy and caesarean deliveries.

The objective of this analysis is to review the data regarding VVF repair before and after the routine pre-operative use of phenazopyridine during short term medical missions (STMM). Specifically, the rates of multiple VVF, the rate of surgical success, and any correlations will be presented.

The STMM was part of a larger organization which provides other health sustainable health resources, education on an ongoing basis and access to clean water. Gynecologic oncologists, each with over a decade of experience repairing complex vesico-vaginal and recto-vaginal experience were involved in all the surgeries with a two-prong goal. First to help the women of Cote d’Ivoire. Second, to train Ivorian Obstetricians in the repair of these fistulas.

The information was collected from medical records for nine 2-week medical missions in the Zanzan Region of Cote d’Ivoire 2012–2019. Data was collected for all women with genito-urinary fistulas caused by obstructed labor with or without rectovaginal fistula. Only women undergoing primary surgical closure were included. No women with failed previous closures were included in this analysis. All fistulas included in this study were repaired via a transvaginal approach. Women with obliteration of the proximal urethra or absence of the urethra were not included in this analysis. No other patients were knowingly excluded.

Each surgeon wore surgical loupes and headlight for the procedure. Each patient’s vulva and vagina were prepped (2% chlorohexidine gluconate) and draped in the dorsal lithotomy position. A sterile urinary balloon catheter was placed transurethrally into the bladder. Scar tissue was dissected first. If the location of any fistula was close to ureteral orifices as identified by the ejection of phenazopyridine then pediatric feeding tubes were placed as stents into both ureters and sewn to the urinary catheter with 4-0 to allow easy removal with removal of the urinary catheter. No cystoscopic equipment was available in the mobile surgical unit in upcountry Cote d’Ivoire. The bladder and vagina were dissected to separate the layers. The fistula tract(s) were excised with micro-Castroviejo scissors to remove just the bladder mucosal edges. The bladder mucosa was closed with a running 3-0 polyglactin suture. Interrupted sutures of 3-0 polyglactin were then used to close bladder muscle over the mucosal suture line. For large defects, a bulbocavernosus flap was tunneled from either the patient’s right or left as determined by patient anatomy and surgeon preference. The flap was tunneled under mobilized vagina mucosa and anchored between bladder and vagina with 2-0 polyglactin suture. Vaginal mucosa was further mobilized to allow tension free closure in different direction than bladder closure. Vaginal tissue closure was performed with a running 3-0 polyglactin suture. When used, the site of bulbocavernosus dissection was closed with deep interrupted sutures of 2-0 polyglactin followed by mucosal closure in a running manner with 3-0 polyglactin or 3-0 poliglecaprone. All patients undergoing vesico-vaginal repair had their repair checked after completion by backfilling the urinary bladder with a dyed solution (either indigo carmine or methylene blue depending on availability).

Transurethral catheters were used for all patients and removed 14 days after the procedural (by a nurse practitioner). In patients with stents, all were successfully removed with removal of catheter. Success of surgery was determined by patient’s subjective self-assessment after voiding after removal of the transurethral catheter. Patients were again seen greater than 6 weeks after surgery to evaluate condition. Data was compiled and analyzed by Chi-squared test with SPSS (v27, IBM, Armonk, NY, USA) with an alpha = 0.05. Fisher’s exact test was used to compare proportions when 5% present or 20% of total in a 4 4 table. 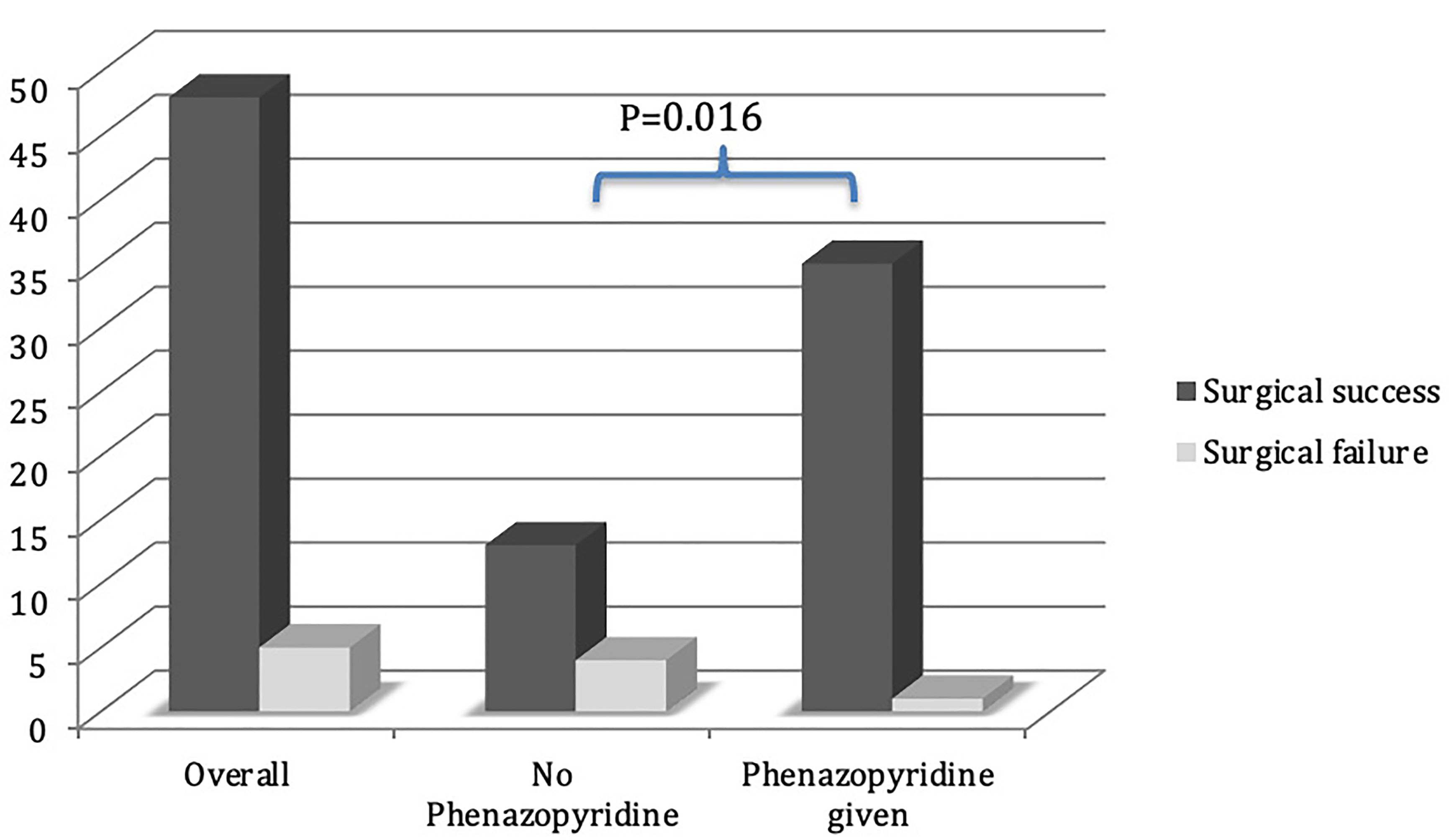 Comparison of surgical success with or without phenazopyridine.

Phenazopyridine is an oral pharmacologic agent used to relieve lower urinary tract symptoms including: irritation, pain, burning, urgency and frequency. It is not an antibiotic and only relieves symptoms. It has the side effect of causing urine to discolor orange because of the delocalization of electrons found in the 2 aromatic rings (Fig. 2). This side effect is advantageous because it allows defects in the lower urinary tract to be readily seen on vaginal examination. 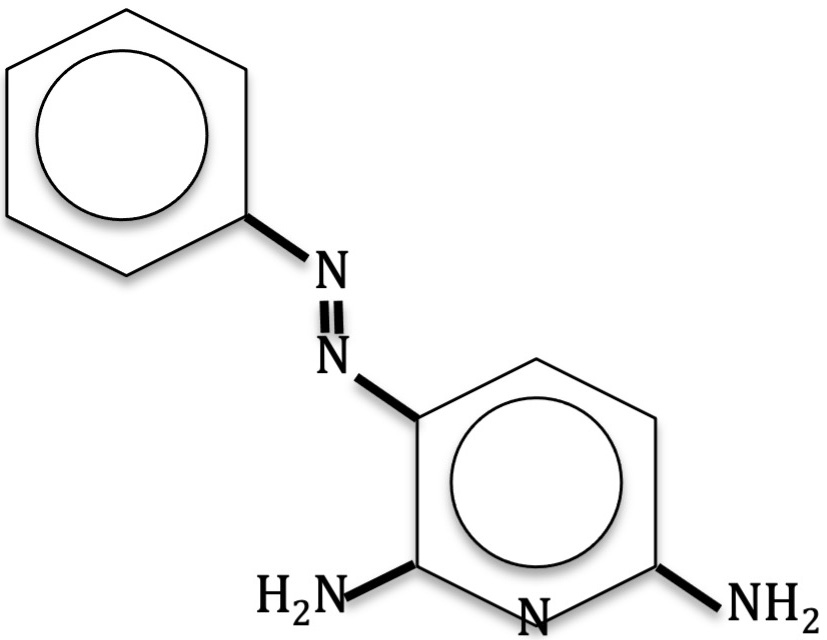 Since this is just an observational study and not a randomized controlled trial, the increased surgical success from the introduction of pre-operative phenazopyridine to see multiple fistulas cannot be definitively accredited to the phenazopyridine. Other causes could include increased awareness of multiple fistulas. Increased surgical skill is also a possibility; however, the gynecologic oncologists involved in this study already had greater than a decade of surgery performing greater than 200 complex genito-urinary repairs (obstetric or gynecologic vesicovaginal) and enterovaginal repairs (over 100 each). Other confounders cannot be ruled out or discredited; however, identification of multiple fistulas is still an important fact since they appear to be common (19.4%). With the ability to identify patients who need multiple repairs, and not just one repair, more patients can be helped to have these physical defects corrected and hopefully return to desired social roles. Although these findings of this study may have no role in resource rich area, these techniques may be helpful to the gynecologist repairing fistula(s) in resource poor areas.

With the goal of short-term medical missions being to provide sustainable care for those being treated, using a safe simple method to easily identify multiple fistulas when present is an important treatment adjuvant. Not all medical providers in remote areas of underdeveloped countries have access to technology available in developed countries. Therefore, it is important to have simple safe options available.

The study was conducted in accordance with the Declaration of Helsinki, and the protocol for the retrospective review was approved by the Ethics Committee of Faulkner University (approval number: 21-08011). As this was a retrospective study, no informed consent was necessary.

We would like to express my gratitude to all those who helped me during the writing of this manuscript. Thanks to all the peer reviewers for their opinions and suggestions.

The authors declare no conflict of interest. JG is serving as one of the Editorial Board members of this journal. We declare that JG had no involvement in the peer review of this article and has no access to information regarding its peer review. Full responsibility for the editorial process for this article was delegated to MHD and SM.

Comparison of surgical success with or without phenazopyridine.