It is well established that the systemic inflammatory response is related to alterations in circulating white blood cells, specifically the presence of neutrophilia with a relative lymphocytopenia [7, 8]. In that respect, lymphocyte to neutrophil ratio (NLR) can be a rapid and simple marker for systemic inflammation [8]. Several reports suggested that NLR can be a useful marker for the prediction of cancer prognosis, risk of hypertension, and cystic fibrosis prognosis, which is highly relevant to systemic inflammatory response [9, 10, 11, 12, 13]. However, there have been no reports comparing systematic inflammation after TAH, VH, and TLH, which might be associated with tissue trauma and stress during surgery [4, 5, 14, 15].

Therefore, in this study, we aimed to quantify surgical inflammatory response and tissue trauma after hysterectomy, by comparing postoperative NLR changes after TAH, TLH, and VH.

The route of hysterectomy was selected on the surgeon’s discretion. Generally, VH was preferred to TLH for a mobile uterus with vaginal accessibility, regardless of the size of uterus. Uterine mobility was determined on pelvic examination using a tenaculum. If the cervix descended adequately (to more than the lower half of the vagina), the surgeon opted for VH rather than laparoscopic or abdominal hysterectomies. TAH was opted for women with large size uterus (more than 12 weeks of size) and highly suspected severe pelvic adhesion. Each procedure was performed by one of the three senior surgeons in the conventional manner.

Statistical analysis was performed using SPSS for Windows (version 18.0, SPSS Inc., Chicago, IL, USA). Dichotomous variables were compared by Fisher’s exact test or the chi-square test. Continuous variables were compared by the t-test. Multivariate analysis was performed using binary logistic regression. The hazard ratio (HR) and 95% confidence intervals (CI) were calculated. For all statistical tests, p 0.05 was considered significant. The study protocol was approved by the Institutional Review Board of Hallym University Hospital (IRB file No. 2021-09-004-001).

Total 1549 women underwent hysterectomy for benign uterine disease or cervical precancerous lesions (TLH = 419, VH = 608, TAH = 522) during the study period. 31 cases of TAH were conversion from 30 cases of TLH and 1 case of VH due to unexpected severe pelvic adhesion. Except for younger age in TLH group, patient characteristics including parity and BMI were similar among three groups (Table 1). In surgical outcomes, TAH was associated with the largest EBL and uterine weight. Other two groups showed similar EBL and uterine weight. Surgery time was the shortest in VH group (Table 1).

Indications for surgery were listed in Table 1. Uterine myoma was most frequently observed in all groups. CIN or CIS was the most highly associated with TAH group. 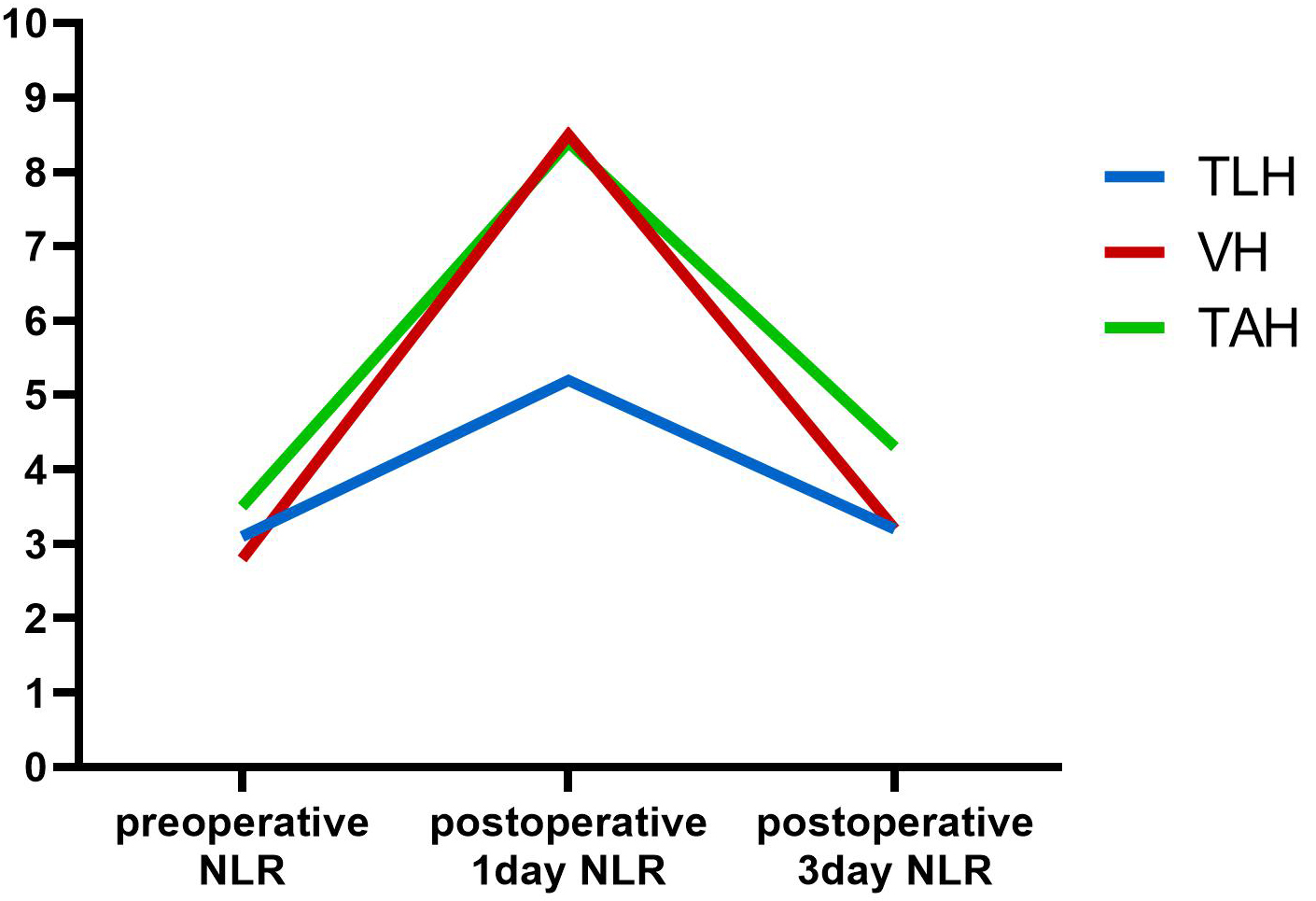 NLR changes from pre- to postoperative 1 and 3 day.

Major complications after hysterectomy were listed in Table 3. There were 1 case of stump disruption, 1 case of fever, and 1 case of hemorrhage after TLH, 1 case of fever after VH, and 4 cases of adjacent organ injury (2 bowel injury, 1 ureteral injury, and 1 bladder injury) after TAH.

Hysterectomy is a major gynecologic procedure, which can be performed via several approaches, such as transabdominal, transvaginal, laparoscopic-assisted, and robotic techniques. With the advent of surgical techniques, minimal invasive surgery including VH, TLH, LAVH, and robotic hysterectomy is preferred to conventional TAH. Although which minimal invasive procedure should be preferred is still in debates, several reports suggested that VH should be standard for the treatment of benign uterine disease and TLH should be reserved for women who cannot be a candidate for VH. VH showed several advantages comparing to TLH, such as no abdominal scar, shorter surgery time, and cost effectiveness [3, 16]. However, there have been no reports comparing systemic inflammation and tissue trauma between two minimal invasive techniques, which might be associated with adhesion making, postoperative pain, and recovery after surgery.

In our data, TLH was associated with less postoperative 1 day change of NLR comparing to VH, and TAH. On postoperative 3 day, NLR resumed approximately similar to preoperative status in all procedures. In addition, massive changes in NLR (more than 5) on postoperative 1 day were significantly associated with type of surgery, regardless of BMI, surgery time, and EBL. We consider that less change in NLR following TLH might be stem from less manipulation of tissue during surgery and minimal incision. It is well-known that performing the least invasive method, which is associated with less tissue trauma and less systemic inflammation, is the key to decrease the risk of adhesion formation [17]. There are a number of trials supporting that laparoscopic hysterectomy is associated with less postoperative pain, less tissue manipulation, and earlier resumption to normal activity than vaginal or abdominal approaches. A small prospective, randomized, controlled study which includes 46 women who underwent TAH (n = 23) or LAVH (n = 23) reported that analgesic requirement is lower in the laparoscopy group than laparotomy group [18]. A meta-analysis which includes 34 trials comparing surgical outcomes of TAH, TLH/LAVH, and VH revealed that TLH/LAVH and VH were associated with earlier resumption to normal activities than TAH (VH vs. TAH, mean difference 9.5 days; TLH/LAVH vs. TAH, mean difference 13.6 days) [3]. A prospective, randomized study, which includes 125 women (40 VH, 44 laparoscopy-assisted vaginal hysterectomy (LAVH) and 41 TLH) who indicated to undergo hysterectomy for benign uterine disease, reported that LAVH and TLH group were associated with less consumption of analgesics comparing to VH group (p = 0.012) [19]. In a recent prospective, non-randomized trial which includes 164 women, TLH group consumed less opioid than VH group during the 20 hrs period after surgery (19.9 mg vs. 22.8 mg at postoperative 4 hr, p = 0.040; 23.5 mg vs. 27.4 mg at postoperative 6 hr, p = 0.026) [20]. Pain scores were also lower after TLH than VH (p = 0.026) [20].

Although there have been several reports regarding systemic inflammatory response after hysterectomies, which marker is specific for postoperative inflammatory response is still undetermined. The authors usually checked multiple inflammatory markers, such as C-reactive protein (CRP), creatine phosphokinase (CPK), and lactic dehydrogenase (LDH), interleukin-6, cortisol, cystatin C, serotonin and white blood cells count [18, 21, 22]. A prospective, randomized, controlled study comparing tissue trauma in TAH and LAVH showed that mean plasma levels of CRP and CPK were significantly higher in the TAH group on postoperative days 1 and 2 than in the LAVH group (p 0.05) [18]. However, LDH increased only in TAH group on postoperative day 2, which is not similar pattern to other markers [14]. Another prospective study including 45 women undergoing hysterectomy (TLH = 15, TAH = 15, LAVH = 15) reported that plasma levels of CRP and IL-6, and VAS core at postoperative 24 hrs were significantly higher in TAH group compared to either laparoscopy groups [23]. In our study, we only checked postoperative changes of NLR. Although we did not consistently check other inflammatory markers such as CRP, our data supports that NLR simply and immediately reflects postoperative systemic inflammatory responses. It is not clear that NLR is the best marker for systemic inflammatory response. However, NLR is a relatively inexpensive and universally available method.

NLR is a noticeable systemic inflammatory marker, which is rapid, simple, and cheap. Recently, several reports suggested that NLR can be a useful prognostic marker for various types of cancer, hypertension, and cystic fibrosis, which is highly relevant to systemic inflammatory response [9, 10, 11, 12, 13]. Specifically, a lot of trials are on-going to evaluate the predictive value of NLR in cancer patients. In a retrospective study including 254 patients who underwent surgery for colorectal cancer, higher pre- and post-operative NLR was significantly related to lower overall survival rates (p = 0.0388, p = 0.0006) [9]. In a meta-analysis to determine the predictable value of NLR in the clinical outcome of colorectal cancer patients, elevated pretreatment NLR was associated with poorer overall survival (Hazard ratio (HR): 1.813, 95% confidence interval (CI): 1.499–2.193) and progression-free survival (HR: 2.102, 95% CI: 1.554–2.843) [10]. In addition, increased NLR is also significantly associated with the poorer differentiation of the tumor (Odds ratio (OR): 1.574, 95% CI: 1.226–2.022) and higher carcino-embryonie antigen (CEA) level (OR: 1.493, 95% CI: 1.308–1.705) [10]. Similarly, another meta-analysis including 12 prospective and retrospective trials was performed to demonstrate the prognostic value of NLR in non-small cell lung cancer [24]. The authors suggested that higher NLR (more than 5.0) appears to be associated with a worse survival as well as a worse response to treatments [24].

In our data, TLH was associated with the least changes in NLR, which is followed by VH, and TAH. Also, multivariate analysis revealed that massive changes in NLR (more than 5.0) after surgery were highly associated with the type of procedure. We consider that less change in NLR following TLH compared to VH, and TAH might be related to less tissue manipulation, less tissue trauma during the performance of TLH, which can be associated with less pain, less adhesion formation, and earlier recovery after surgery.

This study has some limitations: (1) Retrospective study. (2) No information of correlations among NLR changes, postoperative pain (VAS score, and consumption of NAIDs), and early recovery. (3) Biases derived from multiple surgeons. Thus, there is a possibility of potential biases associated with the type of hysterectomy selection and sureons’ skill. (4) No information of long-term NRL changes. (5) Single medical center based medical records. Hence, we do not relflect a fairy diverse population. More well-designed prospective study will be required.

In conclusion, our data suggested that TLH could be preferred to VH and TAH for the treatment of benign uterine disease, because TLH was associated with less systemic inflammation and tissue trauma during surgery and showed equivocal surgical outcomes comparing to VH, except for longer surgery time.

SHP and STP conceived and designed the manuscript; SHP, SYJ and HYC performed the review and editing; STP, SYJ and HSK analyzed the data; HYC and HSK wrote the paper. All authors read and approved the final manuscript.

Waiver of Informed consent was obtained from all study participants and the study protocol was approved by the Institutional Review Board (IRB) at Hallym University Kangnam Sacred Heart Hospital (IRB file No. 2021-09-004-001).

This study was supported by grants from Hallym University Research Fund (HURF) and the Bio & Medical Technology Development Program of the National Research Foundation (NRF) & funded by the Korean government, Ministry of Science and ICT (MSIT) (NRF- 2020R1G1A1005483).

NLR changes from pre- to postoperative 1 and 3 day.