Fertility preservation in oncologic cases has increased exponentially during the last 15 years. Most of these cases occur in women with breast cancer or lymphoma [1,2]. In these cases, ovarian stimulation and oocyte collection or cryopreservation of ovarian tissue are options to maintain fertility in the presence of impending gonadotoxic chemo or radiation therapy [3]. Rarely, the onco-fertility physician will have cases of young ovarian cancer patients who wish to cryopreserve their oocytes or embryos [4]. In such cases, ovarian tissue cryopreservation runs the risk of re-introducing the cancer if the tissue is subsequently returned to the patient. There are over 40 reported cases in the medical literature of ovarian stimulation and oocyte collection in women with ovarian cancer [5-9]. Most of these procedures were performed in women with serous borderline tumors, while some were in women with overt malignancies [9]. Controlled ovarian hyperstimulation poses a major concern of accelerating tumor growth [4], however, borderline ovarian tumors usually recur locally or on the contra-lateral ovary and rarely metastasize. Therefore, fertility preservation in patients who were diagnosed with or previously treated for borderline ovarian tumors is likely reasonable [10]. Whereas ovarian stimulation is usually followed by transvaginal or transabdominal oocyte collection, there are some reports of successful ex-vivo oocyte harvesting in patients with borderline ovarian tumor during the oncologic operation [5,6].

Recurrence rates of borderline ovarian tumor are heavily affected by the type of primary surgery performed. Fertility-sparing surgery is associated with higher recurrence rates (0–25%) compared to the radical approach, where both adnexa are removed (0–5%) [11,12]. In patients who experience recurrence after the fertility-sparing surgery, it is of major importance to assess their ovarian reserve and consider fertility preservation, since they are at increased risk of infertility even in case of a second fertility-sparing surgery [13]. Filippi et al. [8] reported two cases where ovarian stimulation and oocyte retrieval were performed prior to the second surgery, with a satisfactory number of oocytes collected and no detrimental effects on the ovarian lesions noted. Therefore, the author concluded that such a procedure is a feasible option. No evidence of tumor cell growth in-vivo with ovarian stimulation is currently in the medical literature. This may be due to the fact that the majority of these cases involved borderline tumors which are unlikely to produce invasive metastases. We will present the likely first case of ovarian stimulation which was associated with concomitant accumulation of supra-facial fluid that might represent a growth of ovarian tumor cells during the stimulation. The complication seen will be described for the first time in the medical literature. It occurred in a woman with a borderline serous tumor undergoing ovarian stimulation for fertility preservation.

A 30-years old nulligravida woman was referred for fertility preservation 6 months after undergoing right salpingo-oopherectomy due to ovarian torsion and rupture. During the surgery an omental biopsy was taken but the left ovary had a normal appearance. Lymph node dissection was not performed. Pathologic results revealed a borderline serous ovarian tumor, however the omental biopsy was negative for invasive tumor. At the time of diagnosis, her serum cancer antigen 125 (CA-125) level was 245 U/mL (normal range 0–35). She was told at that time, that there was a high risk of re-occurrence in the other ovary and she should consider fertility preservation. She presented to the fertility center and a transvaginal ultrasound scan demonstrated a 7.5 cm complex mass on the left side. Ovarian tissue with follicles was identified. A serum CA-125 level was 66 U/mL. The patient underwent counseling by the oncofertility team, discussing the risk of cancer advancing or spreading during ovarian stimulation and egg retrieval. Since the patient had a partner, she preferred to proceed with stimulation and embryo freezing. The patient was considering undergoing ovarian stimulation and oocyte retrieval when the cyst spontaneously ruptured. She presented to the emergency room in pain and had the cyst resected laparoscopically by her gynecologic oncologist using four ports, one in the umbilicus, one in the right lower quadrant, one in the left lower quadrant, and one in the left upper quadrant. Pathology confirmed a recurrence of the borderline ovarian serous tumor with a non-invasive micropapillary variant.

The patient subsequently took 4 weeks to heal and presented again to the fertility center. Baseline Blood tests before stimulation showed a serum Anti-Mullerian Hormone (AMH) 1.54 ng/mL (range 0.07–7.35 ng/mL, cut off for decreased ovarian reserve 1.50 ng/mL by the assay used), serum basal Follicle-stimulating hormone (FSH) 7.6 IU/L with a serum basal estradiol of 211 pmol/L. A new complex ovarian cyst was present measuring 3.3 cm in maximum diameter. The patient underwent controlled ovarian hyperstimulation over 7 days with a total of 2100 units of human menopausal gonadotropin (Menopur, Ferring, Montreal, Canada) (300 IU daily). She produced 4 follicles of 16–18 mm in mean diameter. Otherwise, at that time pelvic ultrasound was normal. The peak serum estradiol was 3224 pmol/L and 250 mcg of r-hCG (Ovidrel, Merck-Serono, Montreal, Canada) was used for final oocyte maturation. The cyst did not grow with stimulation. On the day of egg retrieval, a large subcutaneous fluid collection was noted for the first time that was clearly differentiated from the bladder overlying the uterus (Fig. 1—ultrasound image). As noted both by the location of the fluid and presence of the fluid collection and the bladder concurrently on the image. This fluid collection ran from the pubic symphysis to the upper abdomen crossing the midline. It was one centimeter in anterior posterior thickness and was well above the peritoneal cavity in a supra fascial location. Oocytes were retrieved. Referral to the Gynecologic Oncology (GYN) oncologist was made again. A decision was made to obtain a fluid sample for cytology and order an Magnetic resonance imaging (MRI) at the same time. An MRI was performed to delineate the fluid collection, 7 days after the oocyte retrieval at which point the fluid collection was gone (Fig. 2—MRI image). The fluid cytology had not yet been performed. During two subsequent stimulation cycles (1–2 weeks after collections), with the same protocol, no fluid was observed to collection in the supra peritoneal space. Removal of the recurrent ovarian mass again revealed a borderline ovarian serous tumor. 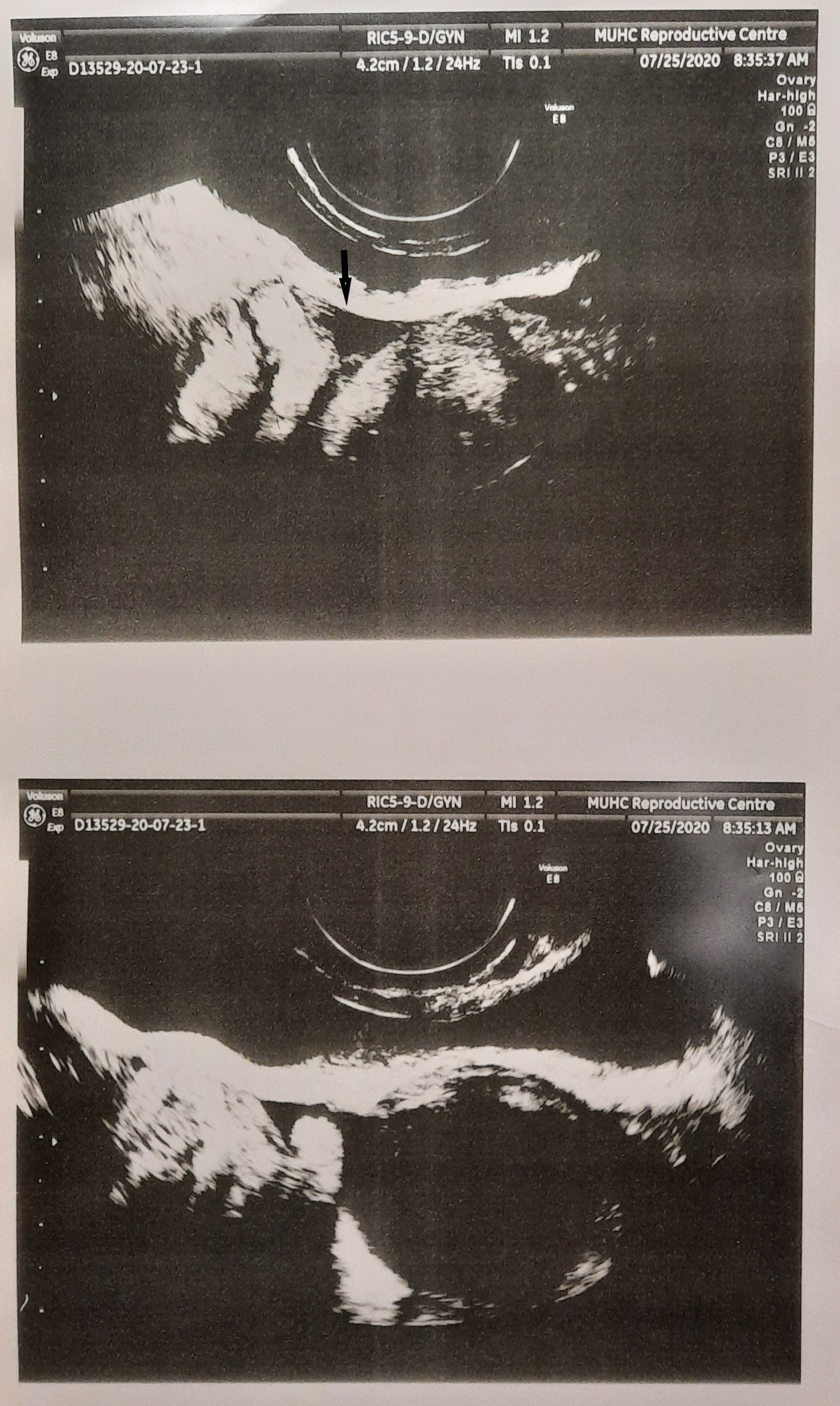 Transvaginal ultrasound demonstrating subcutaneous fluid collection on the day of oocyte retrieval. (Please note the separate fluid of the urinary bladder overlying the uterine corpus as marked by an arrow). 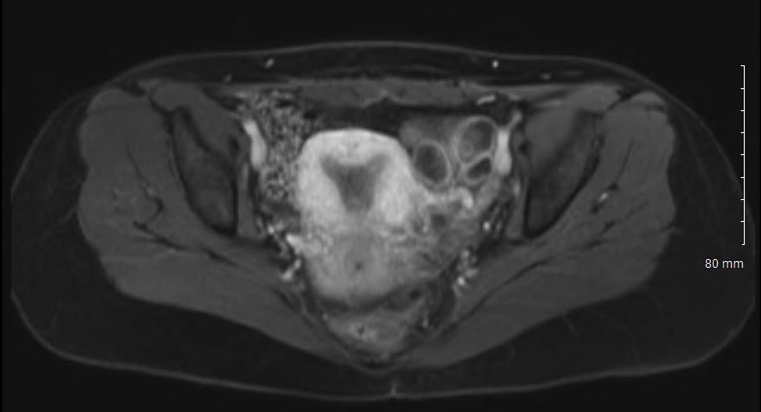 Abdominal MRI performed one week after oocyte retrieval, demonstrating disappearance of the fluid.

Fertility preservation in patients suffering from borderline ovarian tumors have been described in the literature [5,7,16]. Gonadotropin stimulation of ovarian tumor cells could in theory cause tumor cell growth and metastasis to occur. However, up until this point no proof of such has been noted. This was assumed to be due to the short duration of gonadotropin stimulation. However, this is the first time in the medical literature that a supra-facial large fluid collection occurred during ovarian stimulation of an ovarian tumor patient, with the absence of ascites or ovarian hyperstimulation syndrome. The subject had only 4 follicles stimulated, relatively low serum estradiol levels and no ascites was present. It is also extremely unlikely that ovarian hyperstimulation syndrome was present on the day of oocyte retrieval because it usually occurring several days latter. Interestingly, the fluid collection was self-limited and disappeared post ovarian stimulation. Regrettably, this occurred prior to obtaining a cytological specimen of this fluid for assessment. Our hypothesis is that during the emergency operation for the cyst rupture, before the stimulation cycle started, low malignant potential ovarian cells spread via the laparoscopy port to the subcutaneous space, although of such we cannot be certain.

As for the fluid collection being induced by ovarian stimulation, several unique issues occurred. First of all, the fluid collection reabsorbed on its own and did not re-occur with the subsequent stimulation cycles. We suspect this reflects the propensity for low malignant potential tumors not to metastasize in an invasive fashion. Although, these tumors seed cells to the peritoneal cavity, these cells have a life cycle and undergo spontaneous apoptosis. We hypothesize this likely occurred to the cells causing the fluid collection in the subcutaneous space, however, no cytology specimen was obtained since the fluid reabsorbed prior to this being done. Whether ovarian stimulation increases invasive metastasis of low malignant potential ovarian tumors is unknown. There is a paucity of evidence regarding controlled ovarian hyperstimulation in patients with borderline ovarian tumor. This tumor has both receptors for estrogen as well as progesterone, and there may be detrimental effects of controlled ovarian hyperstimulation on borderline ovarian tumor growth [4]. It is possible that hormone production seen with ovarian stimulation may induce an apoptosis of these borderline ovarian tumor cells [4] or that they would have undergone apoptosis anyways, since this may be the nature of such a tumor. In future cases, use of an aromatase inhibitor may prevent growth of the tumor cells by decreasing endogenous estrogen levels and should have been considered in this case. Aromatase inhibition was not initiated with the stimulation protocol due to the propensity of low malignant potential tumor cells to not metastasize.

This case demonstrates a unique complication of ovarian stimulation that has not been previously reported in the medical literature. Reassuringly, the fluid collection was self controlled and did not re-occur. This finding suggests that if caused by cells from the ruptured tumor, ovarian stimulation did not alter their life cycle and they likely continued to undergo apoptosis. As such, ovarian stimulation in borderline malignant ovarian tumors needs further study.

RH, SS and MHD made substantial contributions to the conception or design of the work; or the acquisition, analysis, or interpretation of data; or the creation of new software used in the work; drafted the work or revised it critically for important intellectual content; approved the version to be published; and agree to be accountable for all aspects of the work in ensuring that questions related to the accuracy or integrity of any part of the work are appropriately investigated and resolved. All authors read and approved the final manuscript.

The patient has given written consent to the inclusion of material pertaining to herself; The authors have fully anonymized the patient. Ethics approval for case reports is not required at our institution.

We wish to thank the patient for consenting to publication of this article.

The authors declare no conflict of interest. MHD is the Editor in Chief of this journal, given his role as Editor in Chief, had no involvement in the peer-review of this article and has no access to information regarding its peer-review.

Transvaginal ultrasound demonstrating subcutaneous fluid collection on the day of oocyte retrieval. (Please note the separate fluid of the urinary bladder overlying the uterine corpus as marked by an arrow).