Laparoscopic tubal sterilisation is increasingly considered as a day-surgery procedure. After careful selection, patients undergoing day-surgery laparoscopic procedures may benefit from early mobilisation, earlier discharge, and reduced analgesia needs [1-6]. Despite such advantages, 35–85% of patients still experience severe post-operative pain after laparoscopic procedures [7], although it may not be comparable to the pain experienced following conventional laparotomy [8,9].

Tubal ligation pain may originate from the ischemic pressure applied to the tubes and/or the prostaglandin release from the fallopian tube tissues [10,11]. Further, the tubal spasm from laparoscopic tubal ligation (LTL) can produce more pain than that from diagnostic scopes [12]. Besides tissue trauma, laparoscopic procedure itself can lead to pain due the effect of carbon dioxide (CO) on the peritoneum and diaphragmatic nerves, in addition to visceral ligament traction [7]. Since female sterilisation is the most common method of contraception worldwide [13], pain following this procedure should be seriously addressed, as it may complicate post-operative recovery [14].

2. Materials and methods
2.1 Setting and participants

This study was conducted in the ambulatory care centre of Penang General Hospital, Malaysia. Written informed consent was obtained during patients’ visits to the gynaecology clinic a few weeks before the date of surgery. Women who were assigned an American Society of Anaesthesiologists’ (ASA) physical classification of I or II, aged between 18 and 55 years, and were scheduled to undergo LTL were considered eligible for participation. Patients with known drug allergies to substances in the local anaesthesia, ropivacaine, parecoxib, or having received analgesia 12 hours before the scheduled procedure were excluded. This study was registered and approved by the Ministry of Health Research and Ethics Committee (MREC) of the National Medical Research Register and the Clinical Research Centre (NMRR), Malaysia (NMRR-09-601-3897).

As shown in Fig. 1, eligible and consenting patients were randomised and allocated, on completion of their LTL, to either the ropivacaine or the placebo (normal saline) group. Group randomisation was performed according to a table of random numbers. The results were sealed in opaque envelopes and revealed after induction. Except for the research assistant, who prepared the drugs in a different room, all other medical staff, including the surgeon, and the technical staff in charge on the day of the surgery were blinded to the treatment group. 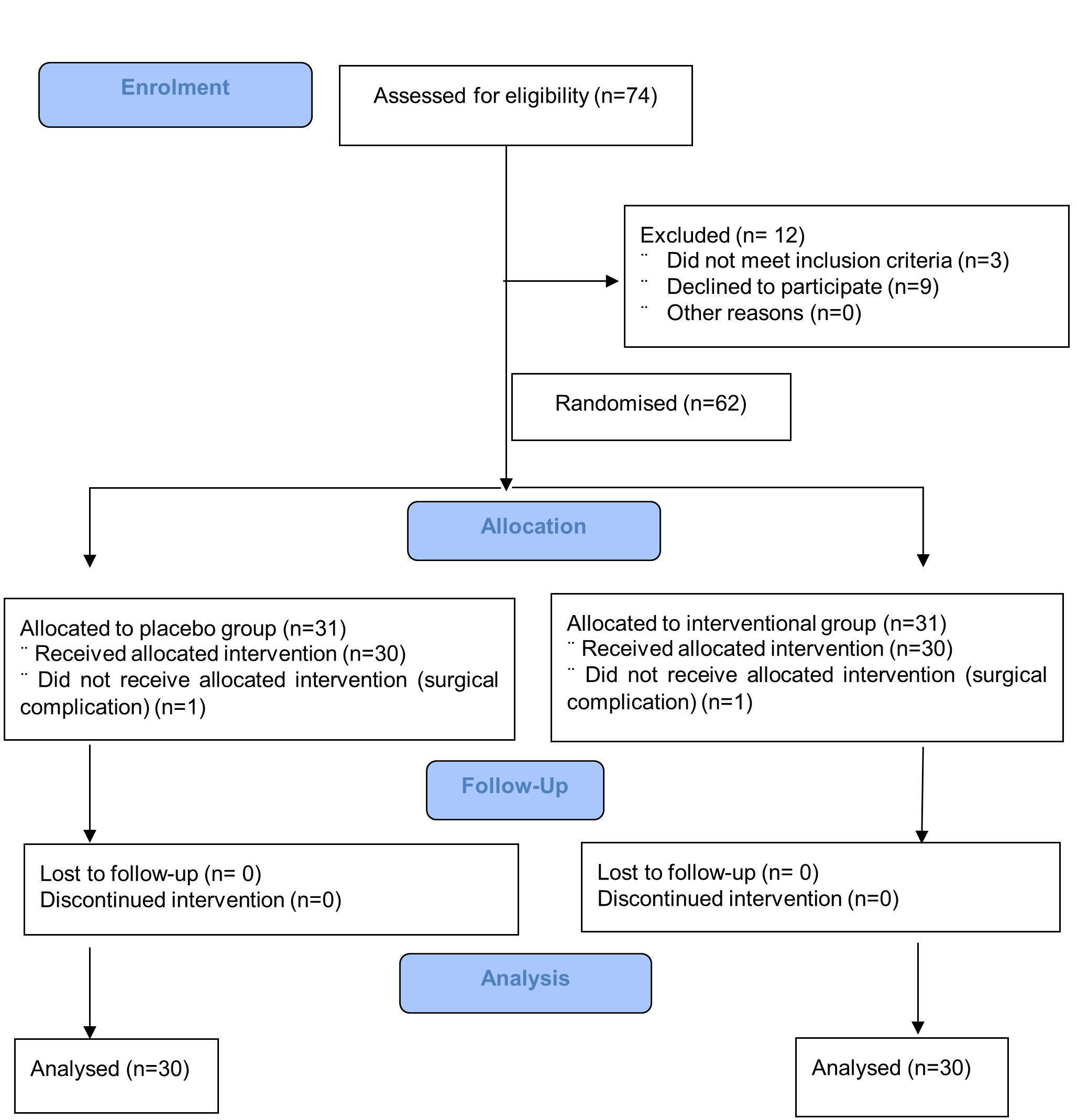 A standard preoperative form was completed in accordance with the Department of Anaesthesia’s protocol. All laparoscopies were performed in the ambulatory care centre’s operation theatre at Penang General Hospital. No pre-medication or any form of analgesia was administered prior to the procedure. The standard anaesthetic agents used included propofol (1.5–2.5 mg/kg), fentanyl (1–2 mcg/kg), metoclopramide (10 mg), and atracurium (0.3–0.6 mg/kg). Anaesthesia was maintained with 50% nitric oxide, 50% oxygen, and 1–2% sevoflurane. No other analgesic was administered intraoperatively.

For each laparoscopy, while the patient was in supine position, a sub-umbilical incision was performed and 2.5 L of CO insufflated into the peritoneal cavity. A 5-mm port was inserted sub-umbilically, and pneumoperitoneum was created using a Veress needle. Another 5-mm port was inserted into the right iliac fossa, left iliac fossa, or suprapubic region under direct vision. The ligation of both fallopian tubes was performed with Filshie clips or Falope rings.

At the end of the procedure, before the removal of the laparoscopic port, 15 mL of 0.75% ropivacaine or normal saline was splashed (7.5 mL on each tube) on both ligated tubes under direct vision, as illustrated in Fig. 2. 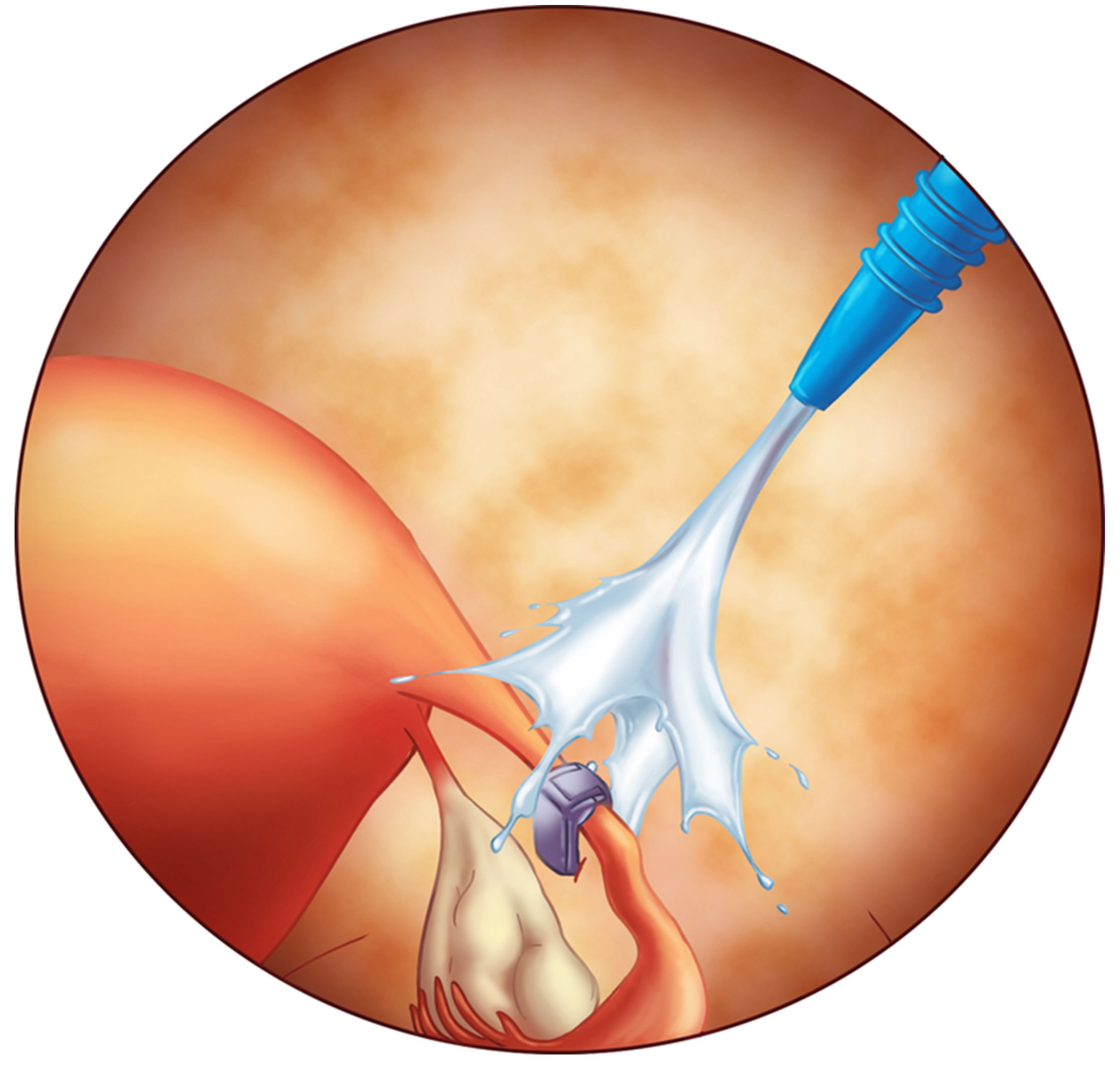 Illustration of intraperitoneal ropivacaine splashing on the ligated tubes during laparoscopic tubal ligation.

The abdomen was then deflated, and the 5-mm port was removed under direct vision. The skin was opposed using a subcuticular technique with absorbable sutures. The skin at both port sites was infiltrated with the remaining 5 mL of ropivacaine 0.75% in both groups, following the standard analgesia regimen. Reversal of neuromuscular blockade was achieved with atropine (20 g/kg) and neostigmine (50 g/kg). After extubation, the patient received 40% oxygen by mask until reaching full consciousness.

Post anaesthesia, the patient was observed in the post-anaesthesia care unit (PACU). Each patient informed the medical staff in charge, who was blinded to the treatment group, of their pain severity using a visual analogue score between 0 and 10 (0 being no pain and 10 being the most severe pain) at 15, 60, 120, and 240 minutes after arrival to the PACU. Medical staff also assessed the need for additional pain relief (intravenous parecoxib 40 mg). After 4 hours post-procedure, the patient’s suitability for discharge was assessed according to the standard local protocol.

In this study, the sample size calculation was performed by referring to a previous study [25]. The mean pain score at two hours post LTL in the ropivacaine group was 2.03 and that of the control group was 0.97. Assuming that the standard deviation is 1.4, with a two-sided significance level of 5% and power of 80%, the minimum number needed for each group was 30.

Seventy-four patients were invited to participate in this study during their gynaecological visits. Among them, nine declined to participate and three were found ineligible. At the beginning of the study, 62 patients agreed to participate and provided consent for LTL. However, two patients were excluded from the placebo (n = 1) and ropivacaine groups (n = 1) because of intraoperative complications (severe adhesions requiring extended general anaesthesia and port entry failure requiring conversion to a mini-laparotomy, respectively). Therefore, 60 patients received their allocated treatments. The placebo group (n = 30) received 15 mL of normal saline intraperitoneally, and the ropivacaine group (n = 30) received an instillation of 15 mL of 0.75% ropivacaine (equivalent to 112.5 mg). The characteristics of all patients are shown in Table 1. There were no significant differences between groups in terms of age, parity, number of miscarriages, or previous surgeries.

Table 2.Description of post-operative pain according to the treatment groups. 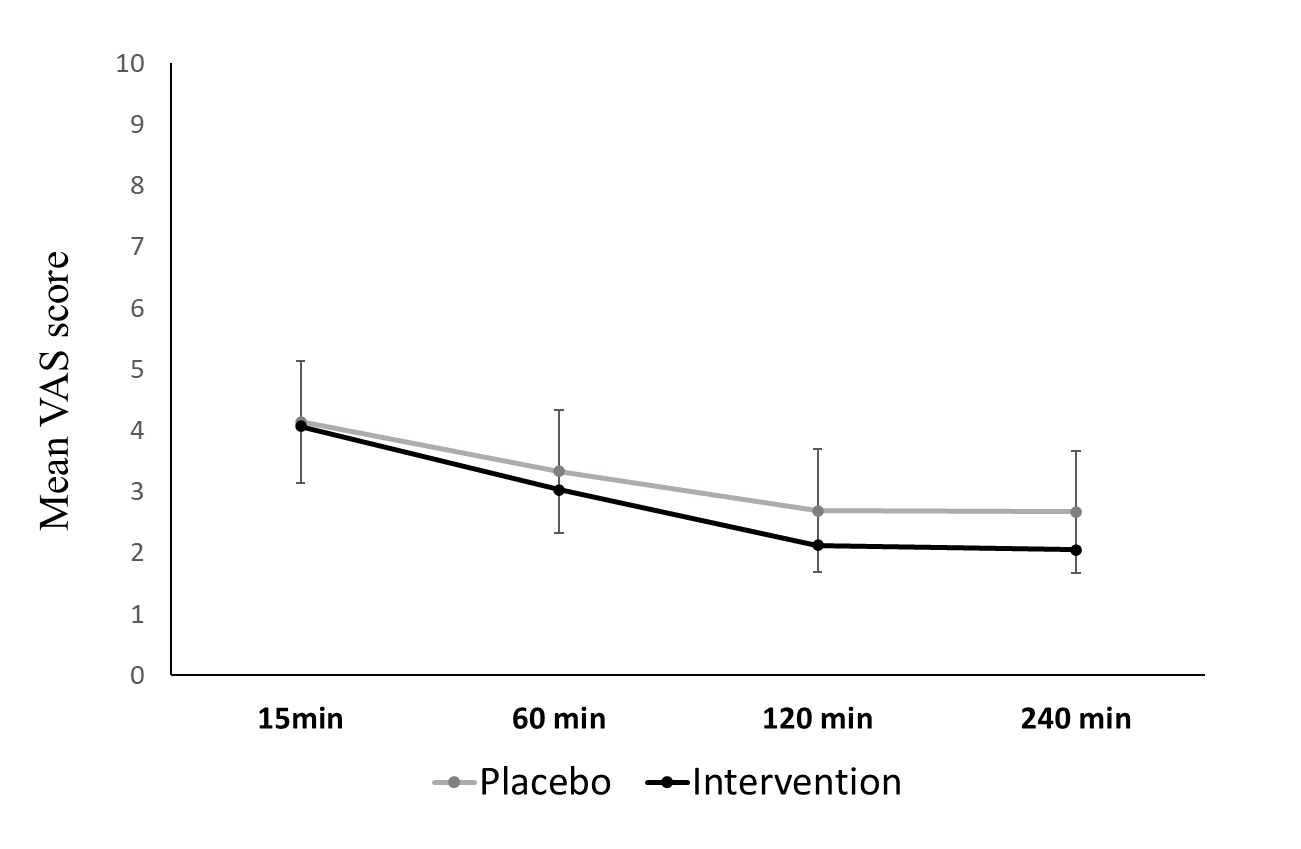 This randomised placebo-controlled trial showed that intraperitoneal instillation of 112.5 mg of ropivacaine over the ligated tubes during LTL did not significantly improve the post-operative pain score.

In the present study, intraperitoneal administration of 112.5 mg of ropivacaine did not improve the pain score between 15 minutes and 2 hours post-operatively. However, a possible significant improvement may have been possible 2 hours post-LTL. In a recent systematic review and meta-analysis of instilled intraperitoneal ropivacaine during laparoscopic cholecystectomy, concentrations as low as 0.25–1.5% were reported to lead to a significant reduction in the pain score measured with visual analogue pain score between 6–9 and 9–24 hours post-operatively [40]. The selected time point to assess pain was six hours, a reflection of the long-lasting effects of local analgesia [41]. Unfortunately, it was not possible to observe our patients beyond six hours as the local protocol guideline advises allowance of discharge within four hours after uncomplicated day-surgery LTL procedures. Moreover, pain management during pelvic laparoscopy was supposedly to be more successful than that during laparoscopic cholecystectomy [9]. The negative outcome of intraperitoneal instillation from our trial could also be attributed to the time of intraperitoneal local anaesthetic instillation. Although there is inadequate evidence to conclusively determine the best timing to instill local analgesia intraperitoneally [42], some studies have observed a successful pain control when local analgesia is applied before tissue trauma [43,44] rather than at the end of the surgery Finally, we acknowledge that the dose of ropivacaine and/or the sample size may have been inadequate to produce a significant effect between 15 minutes and 4 hours post-operatively. The administered dose was selected based on two reasons. We chose 112.5 mg not only to facilitate drug preparation (15 mL of 0.75% ropivacaine and 5 mL of 0.75% ropivacaine under port side skin incision), but also because Labaille et al. [34] reported potential serum toxicity in 2 out of 19 patients with 150 mg of intraperitoneal ropivacaine, although clinical toxicity was not observed. Though a significant reduction in pain score after LTL was observed with the intraperitoneal administration of 150–200 mg of ropivacaine [25,26], care must be taken before a administerating higher doses. Therefore, further trials are required to determine the safest, most effective, and lowest dose of intraperitoneal ropivacaine to reduce pain after LTL.

This randomised placebo-controlled trial showed that instillation of 112.5 mg of ropivacaine intraperitoneally during LTL did not significantly improve the post-operative pain score. However, further research is needed to confirm whether the dose of ropivacaine used and the observation time were appropriate.

Written informed consent was obtained from all participants. This study was registered and approved by the Ministry of Health Research and Ethics Committee (MREC) of the National Medical Research Register and the Clinical Research Centre (NMRR), Malaysia (NMRR-09-601-3897).