A 31-year-old woman, diagnosed with her first pregnancy, was routinely followed via ultrasound (US). In 37th weeks’ gestation (g.w.), a routine US examination was done for routine fetal check-up. Until that moment, no abnormalities were reported in the clinical or US follow-up of the pregnancy and the patient. There were no abnormalities reported during the fetal morphological examination in the first, second or third trimesters therefore it was a normal fetal development. The US confirmed normally formed male genitalia with two US positive testes in the scrotal sac six weeks earlier—during 31st g.w. (Fig. 1).

The US examination visualized normal biometrical indices for the amenorrhea term; normal quantity of the amniotic fluid for the age of the pregnancy. The US in 37th g.w. described for the first time a tumor mass in the right scrotum with homogeneous ultrasound structure 36 37 mm with clearly defined margins and no vessels detected by Doppler US (Figs. 2-4). Peristalsis was not seen in the scrotal sac and only an US positive testis was visualized. The left scrotum presented with normal size and there was an US positive testis to the left. The midline of the testes was displaced to the left (Figs. 3,4). A diagnosis of right sided inguinoscrotal hernia was given. 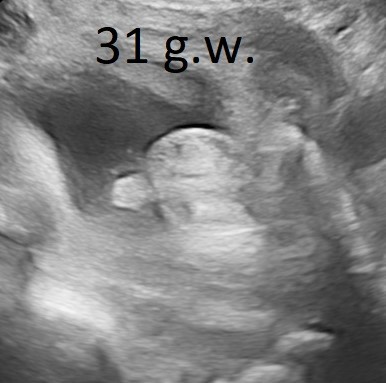 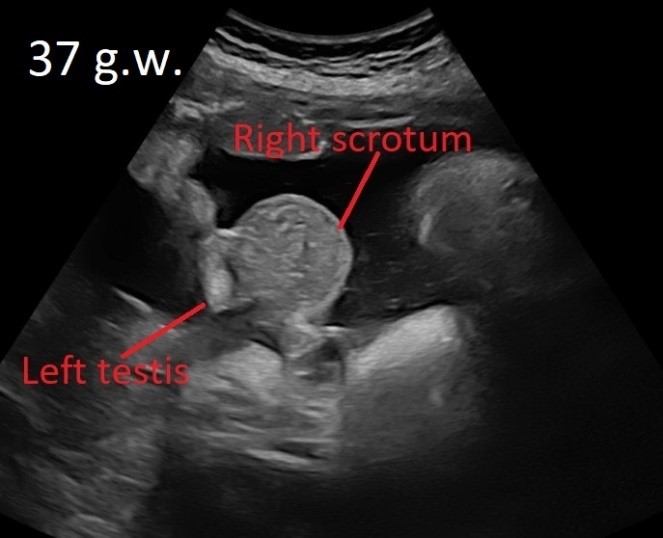 Tumor structure in the right testis during 37 g.w. 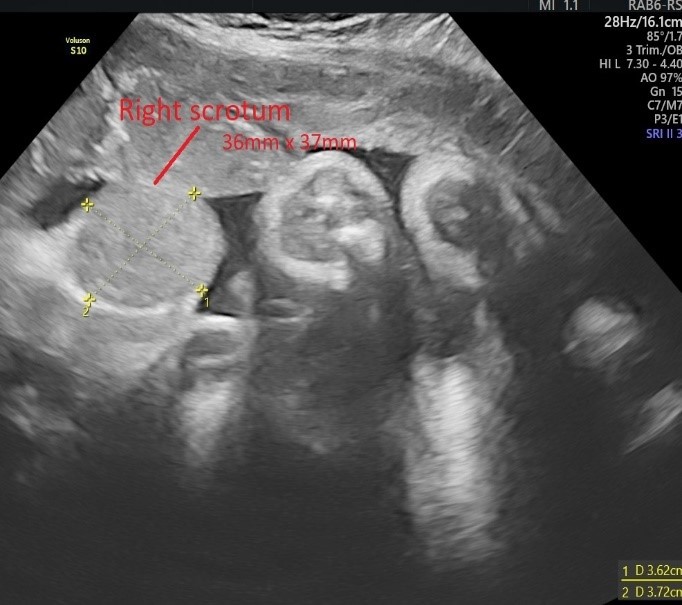 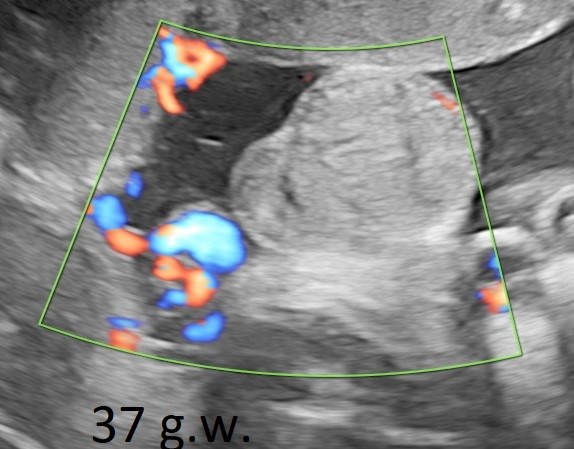 Tumor structure in the right testis in 37 g.w. with Doppler.

The fetus was delivered in the 39th g.w. via an emergency Caesarian section due to a birth arrest of the spontaneous labor. A male new born with body weight of 3290 grams and length of 51 cm was born with an Apgar score of 9 at the first minute and 10 at the fifth minute after delivery. Pediatric surgeon consulted the new born immediately after birth and confirmed the prenatal diagnosis of inguinoscrotal hernia to the right with no peristalsis or clinical data for incarceration (Fig. 5). The hernia was replaced manually. Further more, at the age of 2 months, the hernia persisted and was surgically corrected with no further complications. We obtained ICF from the mother of the newborn before this publication.

Asymmetrical presentation of the scrotum after birth.

Inguinal hernia in children develops as a consequence of incomplete or defective closure of the processus vaginalis peritoniae [3-5]. This evolution takes place during or immediately after birth. In case this does not happen, the increase in the intraabdominal pressure of the newborn may lead to incarceration of an intestinal loop in the scrotum [3,4]. In about 20% of the newborns, the obliteration of processus vaginalis peritoniae does not occur immediately after birth, but at a later stage. Despite being uncommon, delayed obliteration may occur up to 1 year after birth [6]. The rate of this condition is increased in newborns with low birth at delivery and premature babies [7]. Anomalies, causing a higher intraabdominal pressure, such as vigorous cry, ascites, meconium peritonitis, chronic lung disease, bowel pathology and preterm delivery, may be relevant for the development of inguinal hernias due to an increase in the intraabdominal pressure [8].

The mechanism of development of prenatal scrotal inguinal hernia is not well known. Herniation of the bowel loops into the scrotum may occur concurrently with the testicular descent between the seventh and ninth month of gestation [9]. Routine prenatal US has been considered a safe and accurate tool for prenatal diagnostic in pregnant women. It allows for accurate determination of many fetal parameters and dynamic follow-up of the pregnancy. It may also find fetus- or mother-related conditions that could alter the follow-up or the subsequent obstetrical management. Whenever at US examination a scrotal formation is seen, a differential diagnosis with hydrocele, teratoma, hemangiomas, solid testis tumors, intestinal hernia or testis torsion should be discussed. Hydrocele is the most frequent reason [3]. The inguinal hernia is much more rarer and in order to diagnose it, several US criteria should be present: maternal gestational age not less than 26 weeks; scrotal mass with smooth contour and predominant solid content with internal echo-free cystic components, consistent with bowel loops; intestinal peristalsis within the scrotum at real-time US, with movement and deformation of the echo-free cystic components [2]. Typically, the diagnosis is given after 26th g.w. [10], but occasionally it may also be diagnosed earlier—e.g., in 23rd g.w. [7].

Most frequently, the scrotal inguinal hernia is a solitary anomaly. There are, though, reports of co-existing anomalies—rib and vertebral anomalies in the setting of Jarcho-Levin syndrome, lumbosacral myelomeningocele with Chiari malformation, D-transposition of the great arteries, multiple hemivertebrae, and lower extremities fixed in flexion with short longs bones and bilateral talipes [11].

As a rare condition, described in case reports there are no publications, focused on risk factors or the etiology of the condition. In order to compare available data, we summarized the characteristic of the patients, reported in the published case reports in Table 1 (Ref. [1,2,6-8,12-23]).

As a rare condition, summary and description of available data is essential. Of all inguinoscrotal hernias, bilateral localization is the most rarely seen in only 15%. If unilateral, the right-sided hernia is predominant (60%) and localized to the left side of the scrotum—in 25% [7]. The term or the method of delivery (vaginal or Cesarian section) does not depend if hernia is present or not. It is only defined by other patient’s, fetuses’ and pregnancy related factors. Most often, this anomaly is detected as a sole anomaly or related to a co-existing hydrocele; sometimes it may be co-existing with other congenital anomalies. It is discovered at a routine US examination, most often after 33 g.w. However it may also be discovered earlier as there are cases with diagnosis in 21st and 24th g.w. [7,13]. In our case despite undergoing previous multiple US examinations, the hernia was detected and diagnosed via US at a later stage of the pregnancy (37th g.w.). This highlights the importance of a high- quality US follow-up in dynamos, including control examination prior to the expected delivery. Inguinal hernia is seen in one fetus pregnancies with only one case in the literature, where it was diagnosed in the sole male fetus in a multifetal pregnancy [19]. This defect is corrected immediately after delivery or several weeks later. There are cases where the defect was operated later on after a longer interval. But surgical correction is the management of choice as spontaneous regression is rare and described in only one case [6].

In our case, the diagnosis was given in 37th g.w. with no other co-existing anomalies. This finding was incidental at a routine US and did not influence the obstetrical management of the pregnancy. As per local practices and decision of the surgeon, the operative correction was done after 8 weeks post-delivery. We searched the scientific literature and we found out that the recommended time for surgical correction is immediately after or soon after delivery. However, due to the rarity of this condition, there are currently no management guidelines.

Currently, there is no data about longer follow-up after delivery of these fetuses with inguinoscrotal hernia during pregnancy, in particular regarding potential fertility issues in their adolescence. We think this has to be changed.

The inguinoscrotal hernia is a rare prenatal condition, diagnosed incidentally via ultrasound. Typically it is diagnosed after 32nd gestational week and is a single anomaly, not related to congenital hereditary syndromes. The diagnosis of the hernia is given only after a differential diagnosis with other conditions and does not indicate or require a change in the delivery time or method. This is an anomaly that, optimally, is successfully corrected via surgery immediately or soon after delivery.

The patient gave informed consent for inclusion before she participated in the study.

The study was conducted in accordance with the Declaration of Helsinki Ethical Principles and Good Clinical Practices, and the protocol was approved by the Ethics Committee of Medical Center Vitality (approval number: Vit 05/20).