Echocardiography is the most widely used diagnostic tool for detecting changes in cardiac function [1] and innovations in assessment of cardiac ventricular functions are ongoing [2]. The systolic and diastolic functions of the heart can be affected by many variables [3,4] and systemic chronic diseases (diabetes mellitus, hypertension, hyperlipidemia) in particular negatively affect these functions. However, in healthy populations, some conditions such as pregnancy may also change cardiovascular mechanisms.

Pregnancy is a dynamic process that affects the cardiovascular system. During pregnancy maternal cardiac output, preload and maternal blood volume increase and systemic vascular resistance decreases [5]. These changes are necessary for the continuation of pregnancy and the health of the fetus. Most of the changes that occur during pregnancy return to normal after pregnancy [6].

This was a cross-sectional study and contained 195 female patients. Exclusion criteria were patients under 18 years-of-age, a history of coronary artery disease, heart failure, structural heart diseases, rhythm disorders, renal or hepatic disorders and women who were currently pregnant. Inclusion criteria were patients with a history of one or more deliveries and completion of their pregnancy with a living birth. Also, patients with a history of hypertension and diabetes mellitus that may affect left ventricular diastolic functions were included in the study. For all patients, the time since the last birth was at least one year. A written consent form was signed by all the participants. The study was designed in accordance with the Helsinki Declaration’s ethical standards.

Hypertension was defined as systolic pressure greater than 140 mm Hg or diastolic pressure greater than 90 mm Hg or a history of hypertension with the use of antihypertensive medication [14]. Diabetes mellitus was defined as a fasting blood glucose level of 126 mg/dL, a random glucose measurement of 200 mg/dL, hemoglobin A1c 6.5%, or a previous diagnosis with any use of anti-diabetic medication [15].

Data were presented as mean standard deviation (SD) for continuous variables and as numbers and proportions for categorical variables. Distribution of the data for normality was tested by the Shapiro-Wilk test and homogeneity of group variances were tested by the Levene test. The t-test or Chi-square test was used for comparisons of continuous and categorical variables, respectively. For the parameters which are not normally distributed, the Mann Whitney U test was used. More than two independent groups with normal distribution were compared with the ANOVA test. Binary logistic regression analysis was used to identify the associations of diastolic dysfunction presence to other variables. Multinomial regression analysis was used to evaluate the associations of diastolic dysfunction grades to other variables. The data analyses were performed with SPSS 23.0 (IBM SPSS Ver. 23.0, IBM Corp, Armonk, NY, USA). A P-value of 0.05 was considered significant.

Table 1.Characteristics of the study population.

Table 2.Echocardiographic parameters of the study groups.
Table 3.Binary comparison of parity groups according to parameters.

ROC analysis showed that the best cut-off value of the parity number for predicting left ventricular diastolic dysfunction was 6.5, with 66.3% sensitivity and 66.7% specificity (Fig. 1). 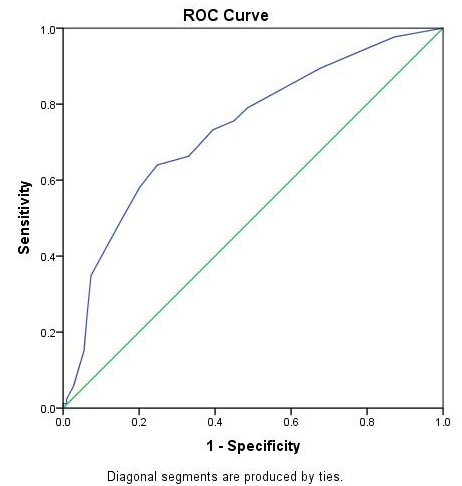 Previous studies have shown that cardiovascular mortality increases along with increased parity [7]. Changes in the renin-angiotensin-aldosterone (RAAS) system explain this mechanism [16]. Estrogen secreted by the placenta increases the release of angiotensinogen. Angiotensinogen produces angiotensin-2 that activates the RAAS system. The RAAS system induces sodium and water retention. As a result, increased afterload is observed during pregnancy. Also, decreased relaxin levels affect cardiovascular mortality during pregnancy [17]. However, these changes continue only during pregnancy and their effects after pregnancy are still not clear. In our study, we hypothesized that repeated pregnancy exposed the cardiovascular system to the above-mentioned mechanisms for longer periods of time. Therefore, even if hormonal levels return to normal after pregnancy, changes in the cardiovascular system can become permanent.

We also found that diastolic function deteriorated as parity increased. Aggarwal et al., performed the first published study on this issue and they found the same results [18]. Other studies similarly showed that diastolic dysfunction increases with parity [6,12]. However, these studies examined up to 7 pregnancies (grand multiparity). In our study, women that have a history of 9 and more pregnancies (great grand multiparity) were also included. The present study has the highest range of parity numbers in the literature.

Aortic stiffness is a prognostic risk factor for cardiovascular mortality. In the present study, binary logistic regression analysis showed that the presence of hypertension and diabetes mellitus did not make a significant difference in terms of diastolic dysfunction; however, the number of pregnancies and age did make a significant difference. This can be attributed to increasing aortic stiffness. In our study, we showed the same results as previous studies in the literature [19-22].

In the present study, a significant decrease in ejection fraction was observed as the number of pregnancies increased. However, this decrease did not reach the systolic dysfunction range (less than 50%). Although Kim et al. found the same results as ours, other studies have not shown this correlation [6,12,18]. Our findings on diastolic dysfunction could be attributed to more participants in our study population having longer exposure due to higher pregnancy numbers.

In conclusion, we showed that parity number is significantly correlated with diastolic dysfunction. Therefore, we recommend that physicians discuss with their patients about multiparity’s negative effect on the cardiovascular system. In addition, we recommend that patients with a parity of six or greater receive more cardiology screening.

This study has limitations that should be considered. First, our study population had a limited number of patients. Second, our findings do not represent the healthy population, because our study only studied patients that were referred to the cardiology clinic with cardiac complaints. Third, we performed this study in a lower socio-economic area that could affect cardiovascular status independently. Fourth, we showed by multinomial logistic regression that parity number and age were significant risk factors for diastolic dysfunction. In future studies, patient’s age should be selected to be homogeneous among groups. Finally, due to lack of facilities, we did not perform cardiac magnetic resonance measurements or measure brain natriuretic peptides that could give more detailed information about diastolic dysfunction.

All subjects gave their informed consent for inclusion before they participated in the study. The study was conducted in accordance with the Declaration of Helsinki, and the protocol was approved by the Ethics Committee of Osmangazi University (approval number: 2020-398).

We would like to express my gratitude to all those who helped me during the writing of this manuscript. Thanks to all the peer reviewers for their opinions and suggestions.