Ligneous disease is a rare chronic, non-infectious form of pseudomembranous inflammation. It is characterized by widespread subepithelial fibrin deposition at various anatomical sites, most commonly the conjunctiva [1]. It can affect the systemic mucous membranes including the oral cavity, gastrointestinal tract, upper and lower respiratory tracts (sinus, larynx, trachea, bronchi and the lungs), ears, female genital tract (ligneous cervicitis and vaginitis), and the renal collecting system [2-5]. The ocular mucosa is most commonly affected. It can be diagnosed by histopathological examination of biopsy specimens. Plasminogen deficiency is present in most cases. Here, we report two cases of ligneous cervico-vaginitis.

The first case was a 41-year-old woman with gravida 3, parity 1, abortus 2. The case was referred to our center from another hospital due to persistent abnormal uterine bleeding and foul-smelling vaginal discharge. Her menstrual periods were regular. Her pap-smear was normal, and the HPV tests were negative. On pelvic examination, the vulva and the vagina were normal; however, there was a lesion on the cervix that resembled a cervical tumour with haemorrhage. Fig. 1A. On the transvaginal ultrasound, there were calcified nodular lesions. These calcified nodules extended from the fundus uteri to the cervix. Multiple biopsies were obtained from the right half of the cervix due to suspicion of malignancy. The biopsy results were fibrin, mucus, chronic cervicitis, ligneous cervico-vaginitis and ligneous endometritis. After biopsy results patient was referred to the haematology division of a tertiary referral center to check for plasminogen deficiency. Her plasminogen level was 29% (70%–130%). There was no cytopenia. The PT (prothrombin time) and APTT (active-partial thromboplastin time) levels were normal. Plasminogen deficiency was confirmed by hematology. In the systemic evaluation, no lesion related to pathological fibrin accumulation was observed in other organs.

The second case was a 31-year-old infertile woman, who presented with the complaints of vaginal odor and vaginal bleeding that persisted during and after coitus. She was treated as vaginitis and biopsy was carried out on the cervical lesion. The biopsy result was vaginal adenocarcinoma. After the biopsy result, she was referred to a tertiary referral centre, where the biopsy specimen was re-examined at the pathology laboratory. On the gynaecological examination (Fig. 1B), there was haemorrhagic fibrin deposition in the cervico-vaginal junction. The vulva was normal. Multiple biopsies were conducted. The biopsy results were reported as ligneous vaginitis. Both biopsy specimens were stained with hematoxylin-eosin. There were amorphous and eosinophilic hyalene materials under the exocervix and ectocervix surface epithelium (Fig. 2). The materials were stained with the Congo-Red dye in both cases and it was observed that the amorphous materials under the epithelium were not amyloid (Fig. 3). She also had plasminogen deficiency hence underwent the consultation of the haematology department. Her plasminogen level was 22% [70%–130%]. Her protein C and S levels were normal. The fibrinogen level was 355 mg/dL. The PT and APTT levels were normal. At the same time, a diagnosis of ligneous conjunctivitis was made on the eye examination of the patient. In the systemic evaluation of other organs, there was no lesion of fibrin accumulation. 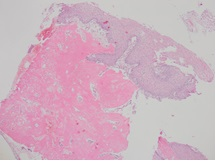 Amorphous material under the stratified squamous epitelium of exocervix (H&E 40). 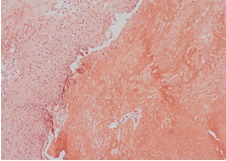 There was no staining with histochemically applied congo-red dye on the amorphous material under the epitlium (Congo Red 40).

Plasminogen plays an important role in fibrinolysis. Deficiency of plasminogen is thought to lead to an inability in fibrin breakdown resulting in accumulation of fibrin. The pathological condition is as follows: in case of injury or inflammation, the extracellular fibrin deposits in mucous membranes cannot be dissolved. The pathological findings are fibrin deposits with associated inflammation referred to as “wooden” plaques in different mucous membranes [6,7].

According to the literature, fibrin accumulation on the amorphous eosinophilic material is not always diffuse or significant. In some cases, this can only be seen in some parts of the fibrin accumulation [8]. Ligneous disease was first reported with its distinctive name in 1934 by Borel, describing a 3-year-old girl with bilateral recurrent conjunctival membranes and characteristic woody induration of the eye [9]. The conjunctiva, middle ear, oral cavity, vocal cords, vagina or the cervix may also or initially be affected.

The typical pathological finding always includes homogenic eosinophilic material together with different extents of scarring. In some cases, there is a concurrent acute or chronic inflammatory infiltration. If this were the first presentation of ligneous inflammation, it would constitute a challenge for the pathologist. The disease is rare and may mimic other inflammatory or neoplastic diseases. Furthermore, the disease may affect women after menopause as well as young infertile adult women [10,11].

One of our patients had a vaginal and the other one had a cervical lesion. They were suspected to be malignant. Both of our patients had plasminogen deficiencies. Making the definitive diagnosis was difficult in the two patients who had been diagnosed with ligneous cervicitis after multiple biopsies.

A treatment has to be planned for the histopathologically diagnosed patients. There are no well-defined treatment methods in the literature. Some local and systemical agents can be used. Plasminogen can be administered intravenously as treatment to patients who have plasminogen deficiency. However, the half-life of this protein is very short. This treatment cannot be administered long term and it is difficult to administer [12]. Due to these restrictions, this type of treatment is reserved for patients who are in critical condition [13].

Local treatments are usually defined in the literature. For example, local excision, corticosteroid including local therapies and heparin. Local and systemic fresh frozen plasma can be administered [14,15]. In some cases, topical vaginal hydrocortisone therapy reduces the vaginal discharges [16]. Oral contraceptives increase the levels of plasminogen. Oral contraceptives can be used for these patients [17]. We should manage these cases in a multidisciplinary fashion. The Haematology or the Ophthalmology clinics could be involved due to plasminogen deficiency or ligneous conjunctivitis, etc. The diagnosis is usually confirmed by identifying the characteristic histopathological features with repeated biopsies [18]. Ligneous cervico-vaginitis can be highly confused with cervical and vaginal adenocarcinomas and can be distinguished histopathologically by immunohistochemical staining [19]. Thus, we can protect the cases from the risks of unnecessary repeated biopsies and cancer surgery.

In conclusion, patients with ligneous cervicitis can have multiple systemic problems. They can have lesions on the conjunctiva, in the middle ear, oral cavity, vocal cords, vagina or the cervix. The lesions resemble malignancies. Multiple biopsies are necessary for the diagnosis due to the resemblance to female genital cancers. A multi-disciplinary approach is critical in this disease.

MSB, OB, CD, AB, CK and TS assembled, analyzed and interpreted the patient data. All authors contributed to writing the manuscript. All authors read and approved the final manuscript.

We thank the patient and her family for allowing us to share her details and thank all the staff of Training and Research Hospital and Akdeniz University Hospital.

There are no conflicts of interest.